Patient Zero must be the most riveting podcast ever made about epidemiology. The new series from New Hampshire Public Radio, hosted and produced by Taylor Quimby, is an investigation into Lyme disease, and it explores this controversial and confusing disease from its first-reported diagnosis in Old Lyme, Connecticut, in 1975, to its role today as a reminder of all that we don’t yet know about medicine and infectious disease. The podcast excels in teaching complicated scientific concepts in a fun, even thrilling manner, and across its seven episodes, we learn about the often-frustrating process involved in investigating a disease’s origins, and what can be done to both prevent and treat Lyme disease.

Curious about how Quimby reported on Lyme and what he learned along the way, I asked him a few questions. In the following interview, Quimby talks about how he got his start in podcasting, how he decided to structure Patient Zero, and his penchant for deploying sound effects that one happy listener considered “hilariously over-produced.”

First off, tell me a bit about yourself. How long have you been working in radio and podcasting? And what brought you to New Hampshire Public Radio?

Basically, I’m a lapsed musician and board game nerd who found a home in podcasting by chance. In college I studied a combination of philosophy, writing, and theater – I had no idea what I wanted to do with myself after school, and applied for a job at NHPR just a couple weeks after graduating. I used to listen to This American Life and Radiolab when I was at work, and I figured a radio station would be a fascinating step up from the jobs I had done up to that point.

I was hired as a part-time board operator, reading hourly newscasts and weather during All Things Considered. At the time I’d do pretty much anything to make myself useful: I changed lightbulbs, made labels for all of the TV remotes around the station, and even drove out to transmitter sites to clip branches and small trees that were growing too close to the guy-wires.

Eventually I landed land a full-time gig producing a live daily magazine show called Word of Mouth, and over the years, as NHPR started looking to develop new shows and podcasts, I transitioned to new projects. I produce and report for Outside/In, a really great environmental podcast (and great test kitchen for storytelling experiments) and I was the senior producer of the true crime podcast Bear Brook.

I think the years of making weird music have helped me to feel comfortable playing in the sound design sandbox, and my interest in philosophy has unconsciously pushed me toward topics that examine perspective and reality.

You’ve been working and reporting on Patient Zero for now over a year. When did you first realize you wanted to explore the origins of Lyme disease?

So a couple of years ago a colleague and I both got sick with Lyme in the span of about two weeks. Lyme has always been pretty bad in New Hampshire, but it still seemed pretty crazy. Someone on our team joked that nearly 25% of NHPR’s podcast unit had gotten Lyme disease.

Right around then, a book about Lyme disease from a prominent researcher in the field landed on my desk and I took it home to read. Lyme is scary stuff, but I found myself totally fascinated by the biology and ecology of the disease. The terminology, for example, struck me as weirdly evocative: an animal that helps store disease in the environment is called “a reservoir.” The ticks that pass it to us are called “vectors.”

Another thing that blew my mind was the “epidemiological triangle” – a sort of organized structure for examining the connections between pathogens, people, and the conditions under which they come together.

I started thinking, what if there was a podcast that took a disease, and then broke down the component parts into separate episodes? An episode for the history, another for the symptoms, one for the biology of the pathogen, another for the ecosystem that allows it to thrive, and so on.  Also, I knew that the Lyme disease epidemic was spreading, and since it’s a big issue here in New Hampshire, it seemed like an appropriate project for NHPR to pursue.

Did the reporting process go as planned?

Not remotely. For one, it turns out that Lyme disease is really controversial. Second, it took me ages to get even a basic grasp of the science, never mind start crafting a story.

Honestly, it would have been easier to start the podcast with a disease that’s a little more straightforward, but I do think Lyme has presented a really interesting challenge. What we’ve wound up doing is focusing on the very thing that stymied my reporting in the first place: why is it so hard to understand Lyme disease? What does Lyme say about the scientific process, and how we in society cope with varying degrees of scientific uncertainty?

The hardest part is knowing that any story about disease involves real people with serious medical conditions, many of whom have felt abandoned or unheard by members of the healthcare community. So how do I give them a voice, while also trying to do a well-researched podcast about the science of disease? It hasn’t been easy, and even after this series is finished I’ll be fretting over whether or not I took the right approach. 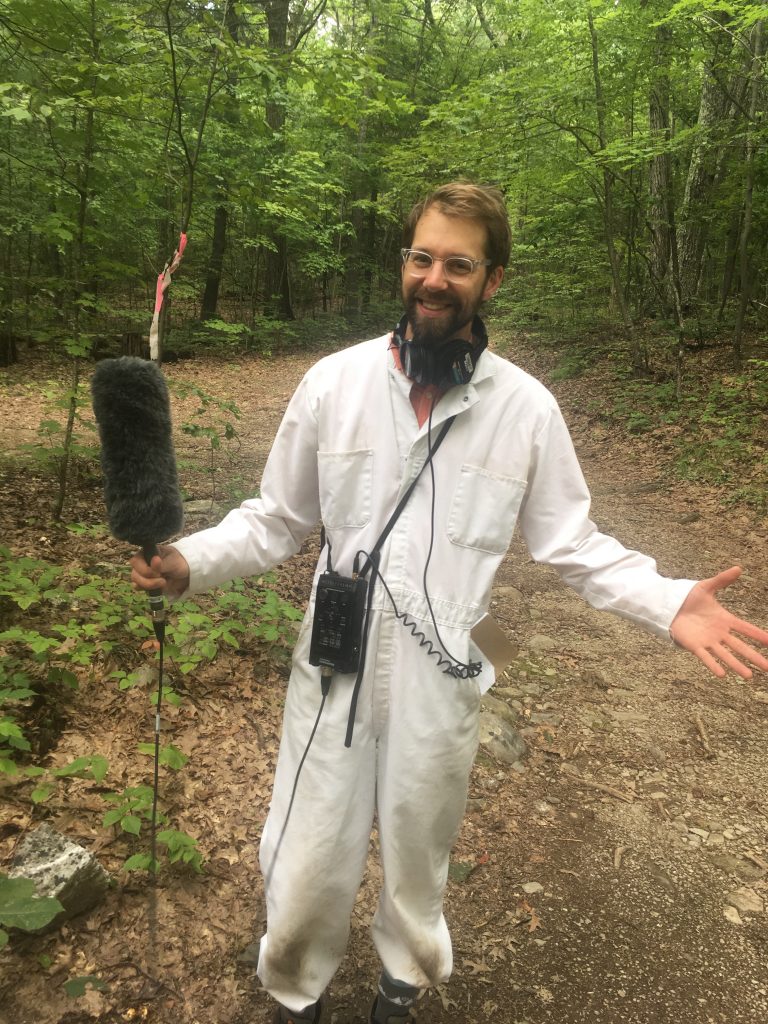 Taylor Quimby in the process of reporting for Patient Zero

Much of Patient Zero is devoted to teaching listeners about epidemiology, which probably isn’t the easiest field to explain. How did you go about incorporating difficult science lessons into the show while maintaining the podcast’s narrative pull?

Lots of gimmicky sound effects. Just kidding, I do that in almost all of my work. The truth is that I think epidemiology is much easier to teach than microbiology, ecology, and some of the other subjects covered in the podcast. The process of an investigation is one that is pretty familiar to us – look for clues, rule out possibilities. But the subject of this investigation is hard: the interaction between people and pathogens is largely invisible to the naked eye, and the jargon required to understand the science gets pretty intimidating.

Would you say you learned a lot about epidemiologists yourself? I never knew that they’re essentially detectives.

They are! But like detective work, a lot of the details are more boring that you might think. The lifeblood of epidemiology is surveillance – because before you can treat an epidemic, you have to prove there is one. The field work is the most interesting to the public, but I get the impression that most epidemiology work is about crunching numbers and counting cases: the equivalent of sitting in a car on a 24 hour stake-out, or filing end-of-shift paperwork.

Beyond learning about epidemiology, what do you hope listeners get out of the podcast?

I’d like to hope that, aside from learning a bunch of interesting latin names for ticks and being generally grossed out, listeners will learn to put the panic over Lyme disease into perspective. People who live in or visit endemic areas (places where ticks carry the disease) should definitely be aware of Lyme, and be freaked out enough to take precautions. That ranges from doing nightly tick checks, to knowing what to expect if you suspect you have Lyme. Understanding the disease, and the limitations of early testing are critical for patients and providers.

On a societal level, we should definitely be concerned too. For a number of reasons, including changes to our climate, Lyme disease and other tick-borne illnesses are spreading into new regions at a pretty frightening clip. I don’t think Canada is very excited about our latest export crop.

On the other hand, stories about Lyme being an intractable life-altering disease should be put into context as well. As opposed to untreatable progressive diseases like Alzheimer’s or ALS, most Lyme patients recover after being treated with antibiotics. There are horror stories for sure, but some providers twist facts and cultivate fear for personal gain, peddling ineffective (or at least unstudied) treatments at high costs to people who may or may not have Lyme disease at all.

So you kind of have to be careful in either direction.

With shows such as Outside/In, Bear Brook, and now Patient Zero, NHPR has quickly become a home for excellent podcasts. How many of you work across the podcasts unit and what does the station’s process for creating a show look like?

Up until this point, it’s been pretty organic. We’ve got a lot of talented people here (honestly, it’s kind of crazy) and so a lot of stuff has come about from the bottom-up or transformed during the production process to accommodate new ideas. There are a group of us who help by listening and providing feedback for multiple projects, and there is definitely some moving around of resources. Going forward, I think the station is interested in starting a more formal green-light process, but the truth is that every team and every project is different and may require different considerations. There’s a lot we still have to learn about the craft, and I doubt we’ll ever have some kind of stream-lined podcast factory. Good content and creativity isn’t easily mass-produced.

Lastly, who comes up with the sound effects for Patient Zero? I’d say they deserve a shout-out.

That would be me! My process has always been to go over-the-top and let other people tell me when I’ve veered into the cheesy or obnoxious territory. Sam Evans-Brown is helping mix a lot of the episodes, and usually tempers my worst instincts, though I suspect he’s letting me take things a little further than usual this time around. I guess as host I get a license to be a little cheesy. A reviewer on iTunes called the podcast “hilariously over-produced,” which gave me a good laugh. I totally agree. So many of the SFX are utterly gratuitous, but hopefully they keep it engaging for people that would otherwise turn away from the science. The reviewer gave it five stars anyway, so it sounds like he’s enjoying it so far.