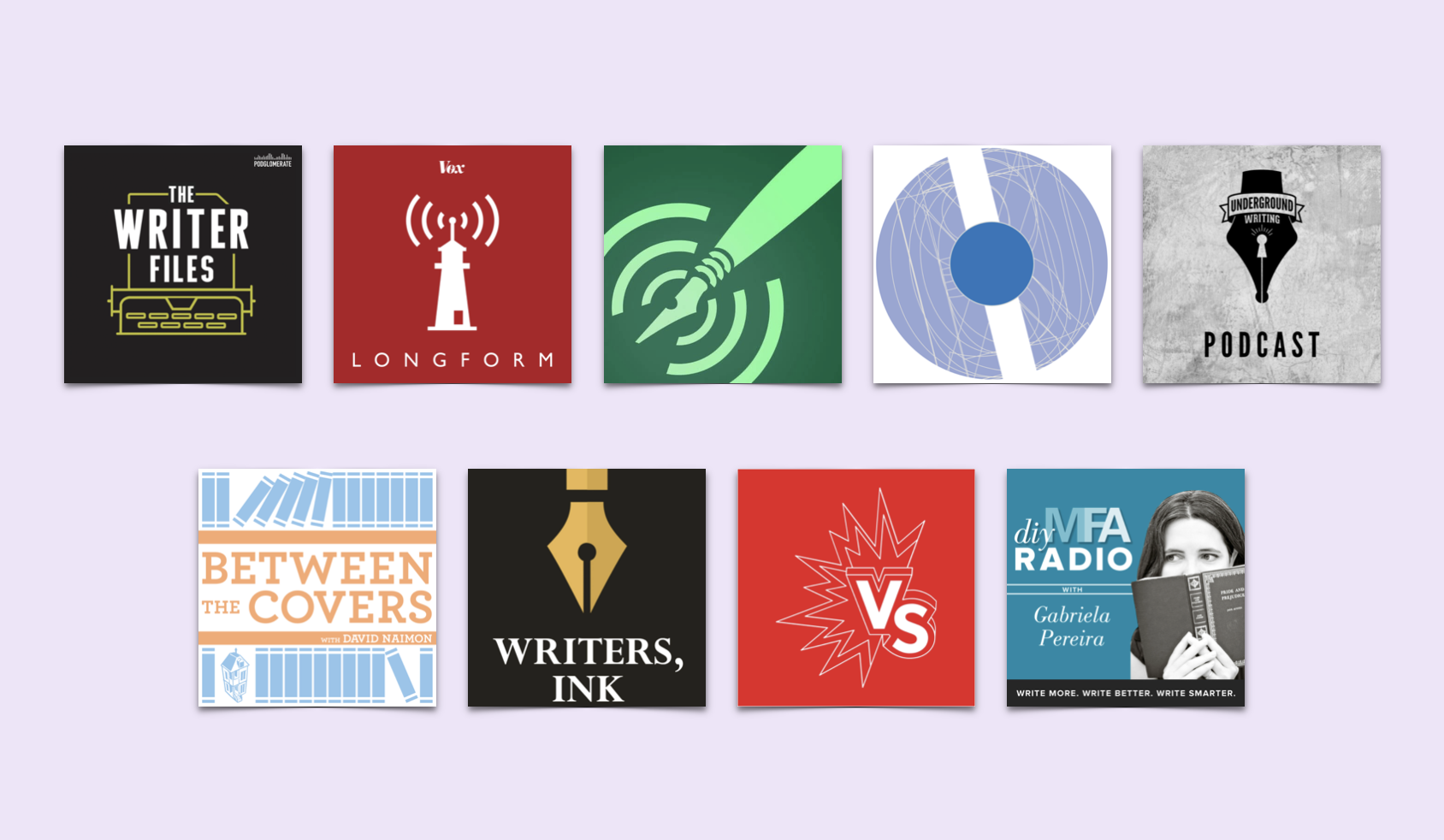 In 1959, Jack Kerouac sat down at his typewriter and compiled a haphazard list of thirty “guidelines” for writing. His nuggets of wisdom included such zingers as “Blow as deep as you want to blow” and “Struggle to sketch the flow that already exists intact in mind.” Whether Kerouac would have done the podcast circuit to promote “Belief and Technique for Modern Prose” is a question lost to history, but the enduring fetishization of the writing process shows that sources of creativity have always been elusive. Writers’ secrets are coveted like truffles amongst hungry pigs.

We all know that talking about writing is easier than actually writing. Listening to the podcasts on this list won’t substitute sitting down and putting words on paper. But it is impossible to deny that whether you are a freelance journalist or a budding novelist, the process of looking for inspiration can be a lonely one. This is where writing podcasts can become a useful resource to support your creative practice. Or, if you’re going to procrastinate, at least do so by listening to one of these nine podcasts for writers to inspire your work.

We’ve all gone through a period of writer’s block. Desperate for inspiration, we might research prestigious graduate programs, hungry for the affirmation that an MFA promises. But times are changing, and having a degree is not necessarily a prerequisite of success. High tuition fees are putting many writers off the concept, so it is no wonder that other platforms are stepping up. Gabriela Pereira is not claiming that her podcast, DIY MFA Radio, is a complete replacement for a grad program, but her popular show provides a toolkit for writers seeking to diversify and strengthen their craft. If you can get past being referred to as a “word nerd” in the first thirty seconds, each episode of the show delves into most questions in writing or publishing that you’ve always wanted to ask. Through interviews with the likes of Jojo Moyes, Brenda Jackson, and Steve Berry, DIY MFA substitutes a seminar for soundwaves. The show explores everything from the obvious (“How to Turn Characters Into People”) to the useful (‘An Inside Look at Tropes in Literature’) and the unexpected (‘Crafting an Amish Romance’). The best part: no student debt.

Many career journalists dedicate their lives to longform writing. Chronicling the development of such writers and storytellers is Longform, an interview podcast prioritizing the slow burn of creative nonfiction in an internet age that rewards clickbait. A recent surplus of episodes featuring writers promoting books and novels isn’t necessarily a drawback. It’s perhaps symptomatic of the recent resurgence in book sales, hardly something to be disappointed about. With a broad scope and a diverse set of guests, Longform does a great job covering a changing industry — especially the way people previously excluded from magazine writing have broken onto the scene.

Describing the aim of Underground Writing, the organization’s executive director, Matt Malyon, writes: “We use creative writing as a shovel. . . And the soil, prepared by the literature, is pliant.” An accomplished and poignant example of how writing can create a positive impact beyond bookshop shelves, Underground Writing is a creative writing program that serves migrant, incarcerated, and other at-risk groups in northern Washington. The long hours involved in completing a book can breed solipsism, even egotism. Although sometimes necessary to finish a project, these feelings often make the process isolating. Listening to The Underground Writing Podcast reminds us that, at its core, writing has the capacity to inspire hope. We don’t need fancy grad programs to create something with substance. Writing belongs to everyone — even, and perhaps especially, the disadvantaged. Created by Malyon alongside Alvin Shim, the project has continued to produce podcast content throughout the pandemic, giving a platform to voices often forgotten in the noise.

With episodes like “How to Write a Book in One Month” and “5 Things Only Serious Writers Do,” The Writer Files is a response to our obsession with productivity. The show features a combination of interviews with writers on the minutiae of their routines and analyses of the science behind creativity, tapping into behavioral techniques with the aim of making its listeners more efficient writers. Some might argue that using neuroscience to deconstruct the magic behind writing risks turning artists into automatons, yet it is undeniable that The Writer Files fills a hole in the discourse around career writing. Occasionally, we must abandon the romanticization of the lonely writer scrawling longhand into a notebook, uninhibited by modern workloads. The episode on “Busting the Myth of the Starving Artist” is an important conversation about writers having the right to live a healthy life. We do not have to die for our art, and The Writer Files is an important reminder.

Between the Covers is a writing podcast with literary clout. Brought to us by the publisher and literary journal Tin House, the show is hosted by David Naimon, a softly spoken modern sage who may or may not be the most knowledgeable person in the genre, though this fact has yet to be verified. The show’s standing as a platform for diverse writers and sharp, reflective conversation makes it the perfect gateway drug for a first audio hit of high-brow literature.

Even if you came for its reputation, you’ll stay for the show’s mini-series “Crafting with Ursula,” where writers discuss their own craft alongside the work of science fiction writer Ursula Le Guin. Le Guin’s masterful world-building proves a perfect vessel for conversation on topics ranging from nature writing to the poetic form. Current and innovative, Between the Covers provides writers with an anchor to a world of its own making, a world that is unapologetically literary.

Writing Excuses is a punchy, fifteen-minute podcast that focuses on the craft behind creative writing. The success of the show, now on its seventeenth season, is down to the dynamism of its presenters. Each one a working writer, the hosts represent a wide range of interests and genres, offering ideas on hundreds of writing topics. Have you ever wondered how to use food as a creative device? Do you know how to you write a character who is out of their depth? In many ways Writing Excuses is delightfully old-school, yet it also reflects emerging and important trends in writing, such as gender, writing “the other,” and using sensitivity readers. Episode highlights include their recent live recorded shows, where the hosts’ crosstalk is funny and engaging; combined with the frequency of their episodes, Writing Excuses is a solid resource.

A self-proclaimed “media autopsy,” this cult podcast by Christan Sager and Charlie Bennett was not overtly aimed at aspiring writers. The goal of Supercontext — which ran from 2016 to 2020 — was to understand why a book, television show, film or album was made, forgoing performing plot analysis or becoming a Cliffnotes hack-job to instead place media in its cultural context. Supercontext was a show that was hard to categorize, encompassing both mainstream and indie genres. Much like the podcast Philosophize This! (the similarity in tone and quality should also be noted), Supercontext relied almost exclusively on the support of its listeners who helped decide that topics became episodes. The podcast was a textbook example of how, as with writing, building a fanbase through authenticity is still achievable today. The show exemplified an important lesson for budding authors and screenwriters: how your writing is consumed will determine whether you can produce more.

Here’s a conundrum for the reviewer: The VS Podcast is easy to describe and yet impossible to describe. Playful, engaging, and original, this is a podcast that straddles the lines between poetry, politics and talk show. So where to start? Well, I can safely tell you VS., as it is also known, is a podcast from The Poetry Foundation, the folks behind Poetry Off the Shelf and Poem Talk. VS. can even be called a radical, queer poetry podcast. But while this show employs a lot of labels, its strength comes from its fluidity. Effervescent and courageous, VS. moves between poetic genres and challenges outmoded ideas about art and identity. With an emphasis on BIPOC art, the show amplifies the voices of marginalized poets and marginalized poetics, engaging with a diverse range of voices. In making space for experimental work, the show is a powerful resource for writers seeking inspiration beyond established boundaries.

Hosted by three bestselling authors, Writers, Ink will make you feel better about that unfinished manuscript on your flash drive. A show about the business of writing, each episode interviews a working writer to explore an aspect of being a professional in today’s industry. The advice is rarely romantic. Arguably, that’s part of the appeal. Many writers, especially those balancing the demands of modern life with their creative practice, are frustrated with the mythology figures like Kerouac perpetuate. Writers, Ink is ideal for those looking to establish a career in writing but who don’t have the luxury of unlimited time to make it happen. As a tool to increase productivity, listening to an episode is probably healthier than developing a caffeine habit, but nobody is saying you can’t do both.