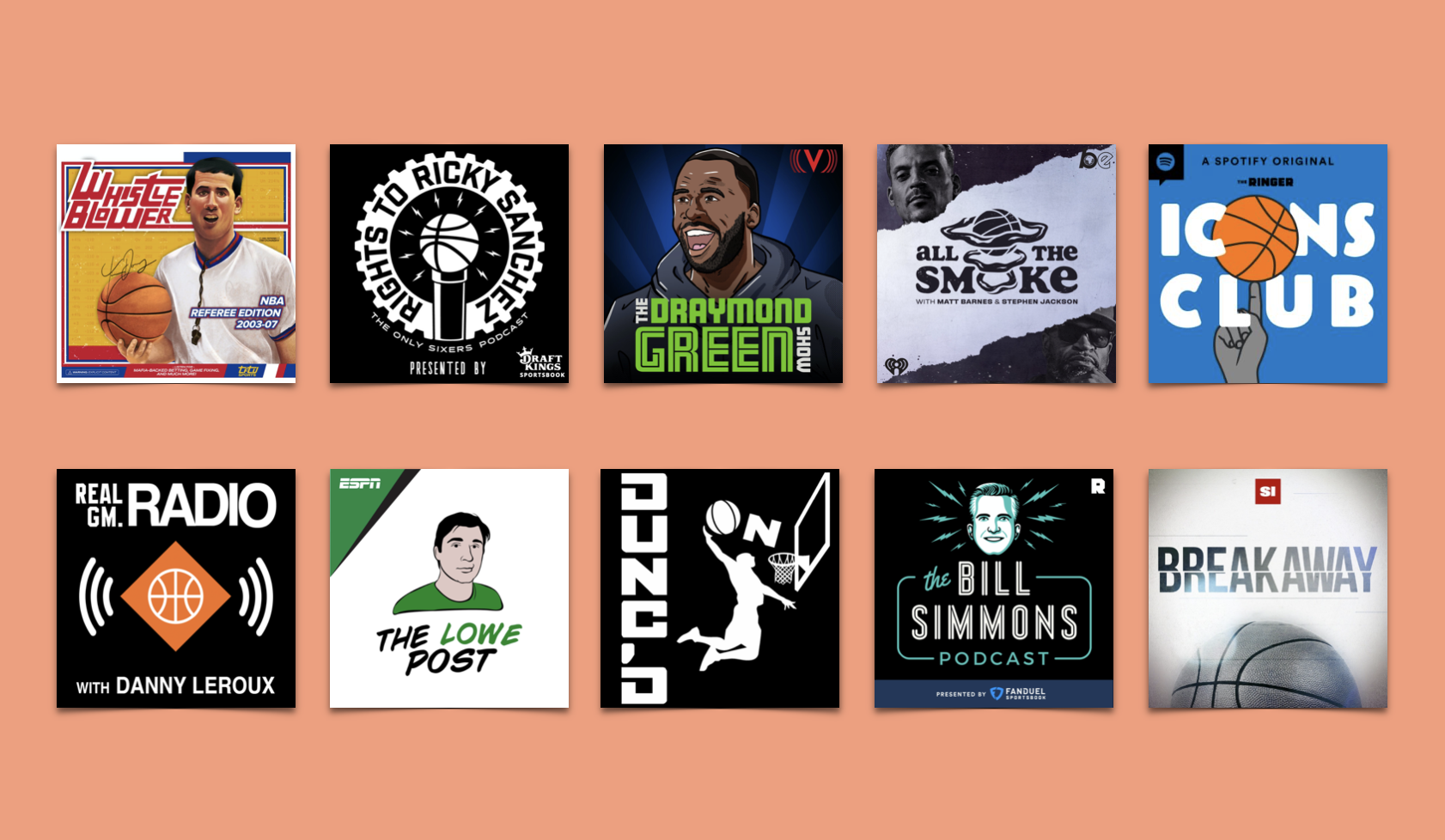 Much has changed since we last updated this list, when every NBA game took place at Disney World and no one could miss a shot. Quality of play has rebounded significantly this season after an injury and virus plagued 2021 that was saved only by Giannis’s performance in the finals. An untainted, competitive postseason is finally here. To prepare for the NBA Finals this week, here’s our list of the eight best ongoing NBA podcasts in addition to two past favorites that help explain the league as it is today.

If you count the old ESPN BS Report, Simmons likely holds the title for the longest-running major NBA podcast. His late-season weekly podcast with Ryen Russillo is his best current offering, though Simmons tends to post three NBA shows a week during the playoffs. Simmons has assumed the role of the NBA’s highest-profile historian, and his individual game recall remains unrivaled.

Breakaway is long gone, yet it remains relevant. During the show’s run, host Rob Mahoney spotlighted 10 players and two coaches as a means of understanding the larger function each person performs within the league. The audio profiles Mahoney produced on players like Wayne Ellington, Julius Randle, Robin Lopez, and Andrew Roberson simply don’t exist anywhere else. The show managed both to explain basketball at its most basic Xs-and-Os level, and to celebrate players who never otherwise would be on a national scale

Nate Duncan and Danny Leroux’s podcast ranks as the most serious, unsentimental NBA podcast. This serious unsentimentality has a lot to do with the fact that it’s a rare daily sports podcast of quality, posting game recaps consistently from October-June. It cannot be stressed enough that the two Athletic writers talk about basketball for 90 minutes, five times a week. That’s a level of productivity typically reserved for sports talk radio, and unlike sports talk radio, Dunc’d On is all analytics. This is the show to turn to for the deepest analysis.

Lowe hosts his ESPN podcast nominally alone, supported by a rotating cast of fellow reporters and occasional player interviews. Lowe’s gift both as a writer and a podcaster is his ability to communicate his deep understanding of the game casually. He can explain a screen or a defensive rotation without a visual aid, and without losing you. The Lowe Post ultimately strikes an excellent balance between analysis and personality. The show doesn’t stray too far from game talk, but Lowe’s jovial enough to let each episode wander into less-NBA-Head territory as well.

Dozens of players-only podcasts have emerged over the last two years, and since October 2019, All The Smoke has proven itself the runaway winner of the category. Matt Barnes and Stephen Jackson were scrappy NBA wings, both picked in the second round, both title winners. Their excellent relationships with players across the league make for affable and lengthy interviews. Episodes with Kevin Garnett, Baron Davis, and Metta Sandiford-Artest are among the most entertaining interviews you’ll hear.

The Rights to Ricky Sanchez

Ricky is the only team-specific podcast on this list, and certainly the most cultish. Spike Eskin and Mike Levin have been piloting their Sixers ship since the depths of The Process, when the show existed to celebrate the shrewd, many-years-in-the-future-inclined trades of then-GM Sam Hinkie, and the occasional successes of scrappy NBA professionals (the Ish Smiths of the world). Ricky has always been about fandom, about how to make rooting for a team, whether decent or god-awful, worthwhile.

This 2020 series contextualizes the Tim Donaghy scandal, in which a single ref was disgraced for betting on NBA games. More than a decade after the fact, host Tim Livingston gives the most complete history of the scandal, and calls into question the always murky story put forth by David Stern at the time. Whistleblower offers some of the best NBA journalism in recent memory.

Draymond’s natural charisma translates well to interviewing, as he has incredible familiarity and chemistry with every guest he brings on his show. Recent episodes with Jayson Tatum and Joel Embiid are highlights of the best interview show hosted by any (active) NBA player. Green and Embiid going back and forth about whether or not Green can take Embiid one-on-one is about as good as it gets.

The Ringer’s Icons Club is Jackie MacMullan’s tour through the history of NBA superstardom, from Bill Russell to Giannis Antetokounmpo. The premise, that greatness has been aided by and handed down from generous older generations of NBA stars, is a poetic one. MacMullan, whose relationships with players past and present are famously strong, got just about every living great to sit down for an interview for Icons Club, even Jordan.