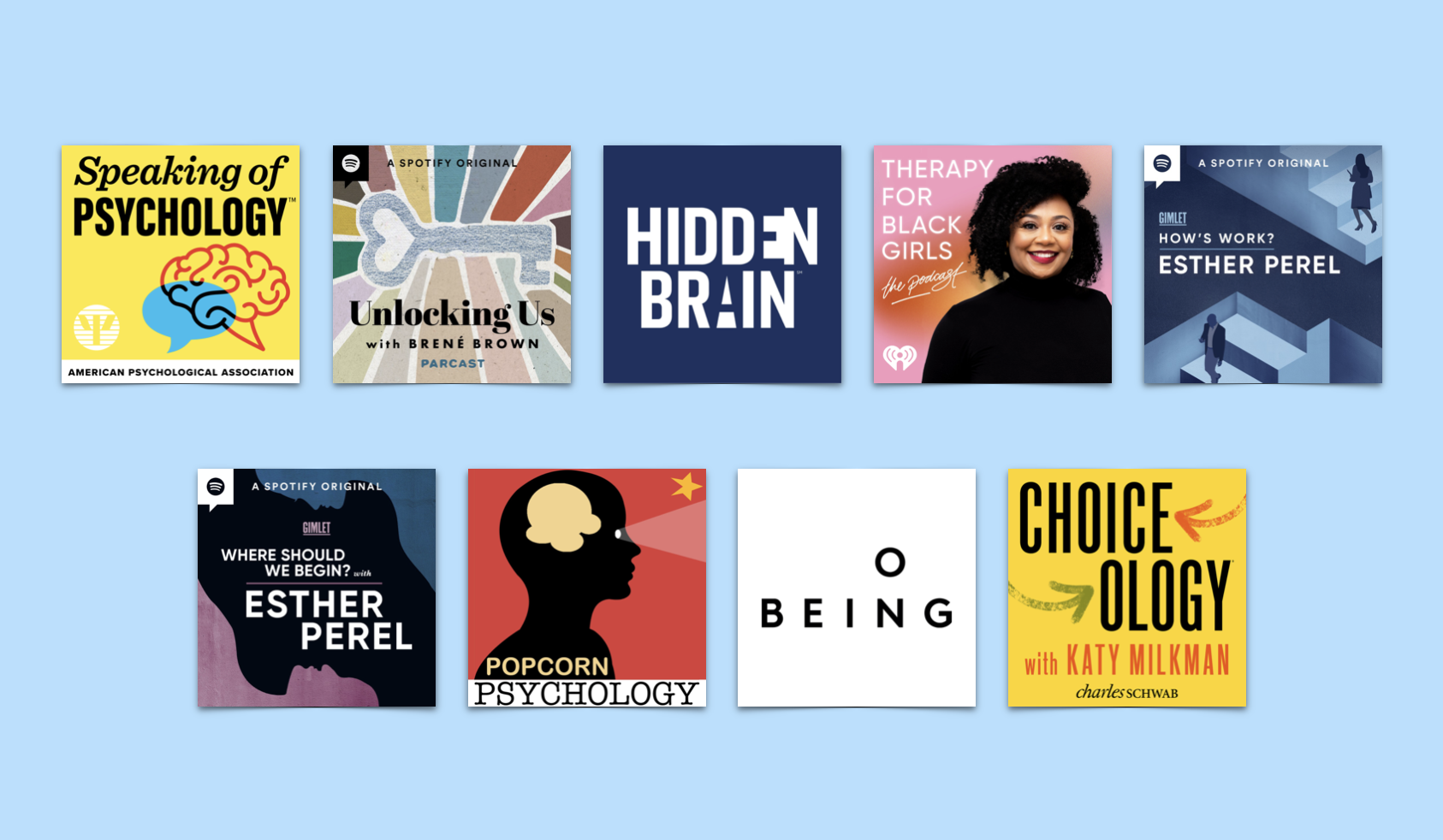 It doesn’t take a professional to point out that good relationships are built through healthy conversation. That doesn’t mean that any talk-heavy podcast can substitute for a session with a psychologist, but if you know where to tune in, there are plenty of professionals using podcasting to make their practice accessible to a wider audience. How else could so many people recline on a figurative couch at once?

Podcasting allows discussions typically confined to a therapist’s office to extend beyond those four walls. As a genre, it’s complicated. There are more layers to psychology podcasts than appearances suggest. For every reason someone might seek out a show about the topic — be it self-help, entertainment, or education — there are half a dozen podcasts catering to that need. Here is our breakdown of the best psychology podcasts, although we can’t guarantee they’ll help you quit that bad habit, or stop your partner from leaving their towel on the bed.

Where Should We Begin? with Esther Perel

Esther Perel is one of the most well-known figures in psychology creating accessible and consistent content. A qualified psychotherapist, Perel has a devoted following: bring up her name at a dinner party, or a staff lunch break, and someone will have a long-winded story of how she helped them. Perel is best known for her work as a couples therapist, and Where Should We Begin? focuses on improving relationship dynamics. Through a combination of case studies and shorter, easily-consumed episodes called “Notes from Esther Perel,” she unravels intimacy issues, communication breakdown and, most recently, how relationships are coping — or not coping — with the global pandemic. Her “Notes” episodes are a great place to start if you are new to her work. Be prepared for candid stories normally kept behind closed doors.

With over 200 episodes under its belt and a loyal listenership, Therapy for Black Girls has expanded beyond the typical parameters of a podcast. It has become an online space for Black women and girls to find reputable therapists and engage in a growing, supportive community. Hosted by licensed psychologist Dr. Joy Harden Bradford, the show breaks down psychological concepts and theories using pop-culture references — a technique that is often absent in the psychology podcasting genre and could be utilized more — with a focus on Black identity. In the introduction to her “Sessions,” the name she gives to the show’s episodes, Harden Bradford makes it clear that tuning in is not a substitute for contacting a therapist. It’s a welcome preface, particularly when the show delves into difficult discussions that might provoke complicated personal reflection. Between harder topics and some lighthearted episodes — such as the recent discussion on why raising houseplants is more than just a trend — Therapy for Black Girls gets the balance right.

Unlocking Us with Brené Brown

In a long-overdue career development, author and professor Brené Brown has transitioned from popular podcast guest to the host of her own popular podcast, Unlocking Us. Brown excels in the unexpected, giving a name to phenomena that many have experienced without understanding the psychological behaviors behind them. While Unlocking Us does a great job of developing her theories on vulnerability and courage, it is her quirkier discussions on “FFTs” (Fucking First Times) and “over-performing” that make for unique listening. Brown’s open and intimate candor is never without boundaries, making for comfortable conversation, the best of which is the two-part episode with Harriet Lerner on making and accepting apologies.

On Popcorn Psychology, three licensed therapists break down the psychological behaviors and issues found in your favorite movies. The podcast’s premise could have teetered into gimmick-territory, but the result is undoubtedly entertaining. It’s hardly surprising that the podcast has a devoted listenership of those who want to dive deep into the media they consume. Popcorn Psychology makes us question the merit of retrospectively diagnosing fictional characters, but since many people have grown up learning behaviors from pop culture, there is value in unpacking the psychological motivations behind the characters we see on screen.

On Being with Krista Tippett

On Being departs from other psychology podcasts as it foregrounds spirituality as a key factor in empathy, self-growth, and communication. If you’re skeptical, don’t let this put you off. Host Krista Tippet, a Peabody award-winning broadcaster, conducts discussions which are grounded in research and weighty testimony from the likes of Jane Goodall, Alain De Botton, and Brené Brown. Tippet herself has been quoted as being “a little bit allergic” to some of the language used to discuss belief. To ignore the importance of faith, secular or otherwise, in peoples’ lives risks erasing a large area of human psychology, which perhaps indicates why Tippet work was awarded a National Humanities Medal by Barack Obama. On Being makes for contemplative, gentle listening. If you become engrossed enough in the conversations, the unedited versions are posted alongside each release, helping give even greater insight into guests’ deeper psychologies.

Speaking of Psychology, presented by Kim I. Mills, delves into the academic side of psychological study. Produced by the American Psychological Association, it aims to provide a platform for the latest case studies in the hope that individuals outside academic research can apply science-based insights to their everyday lives. Like a peer-reviewed journal delivered through your headphones, the weekly interviews have featured discussions on everything from the application of low-dose psychedelics to ways of coping with the pandemic. The show’s academic vocabulary is understandable, but it would be false to claim that Speaking of Psychology is the most accessible show out there. What makes it worth listening to is the quality of the show’s research and the ever-increasing importance of rigorous academic inquiry in the podcasting sphere.

If case studies aren’t your thing, then turn to Hidden Brain. The narrative-based podcast, hosted by Shankar Vedantam, uses storytelling to unravel the science behind human psychology. The episodes are easy to consume, rarely passing the 50-minute mark, and make for perfect listening during a daily commute (when we all start feeling comfortable doing that again). Perhaps the best part of the show is its global focus, sourcing stories from around the world and applying the same empathetic lens to every tale — a noticeably humanist approach.

We seldom include the same name twice in a single list. In fact, we’ve never done it before. But Esther Perel so dominates the psychology podcast genre that to omit her would be like describing our solar system without mentioning Mars. Her second podcast, How’s Work, deals with the fallout from our daily grind, from the psychology of asking for promotions to colleague relationships.

Talking about work isn’t as sexy as discussing romantic relationships, but somebody had to do it. I’m not claiming that Perel is performing a public service, but her podcasts bring difficult conversations into the public sphere in a fashion that is consistent, accessible, and entertaining. It’s little wonder that demand remains high. But what next? Personally, I’m hoping for a show about grief — no doubt, the endlessly productive Perel will deliver down the road.

Choiceology has one goal: to help you make better decisions. Sounds great, you think, but do these podcasters know about the huge bag of chips I ate for dinner last night? How are they going to help me with that? Their answer is science — or, to be more specific, the science behind behavioral psychology. Host Katy Milkman believes that this area of study can help us make more informed choices about how we live our lives, exploring issues within behavioral economics to improve our judgment skills.

If this sounds dry, fear not. The episodes are dynamic, often featuring guests giving anecdotes to back up Milkman’s hard science. One recent episode even featured WWE wrestler Alan Sarven, otherwise known as Al Snow, discussing his Janus-faced image as both a hero and a villain. Who said psychology was boring? Not us.