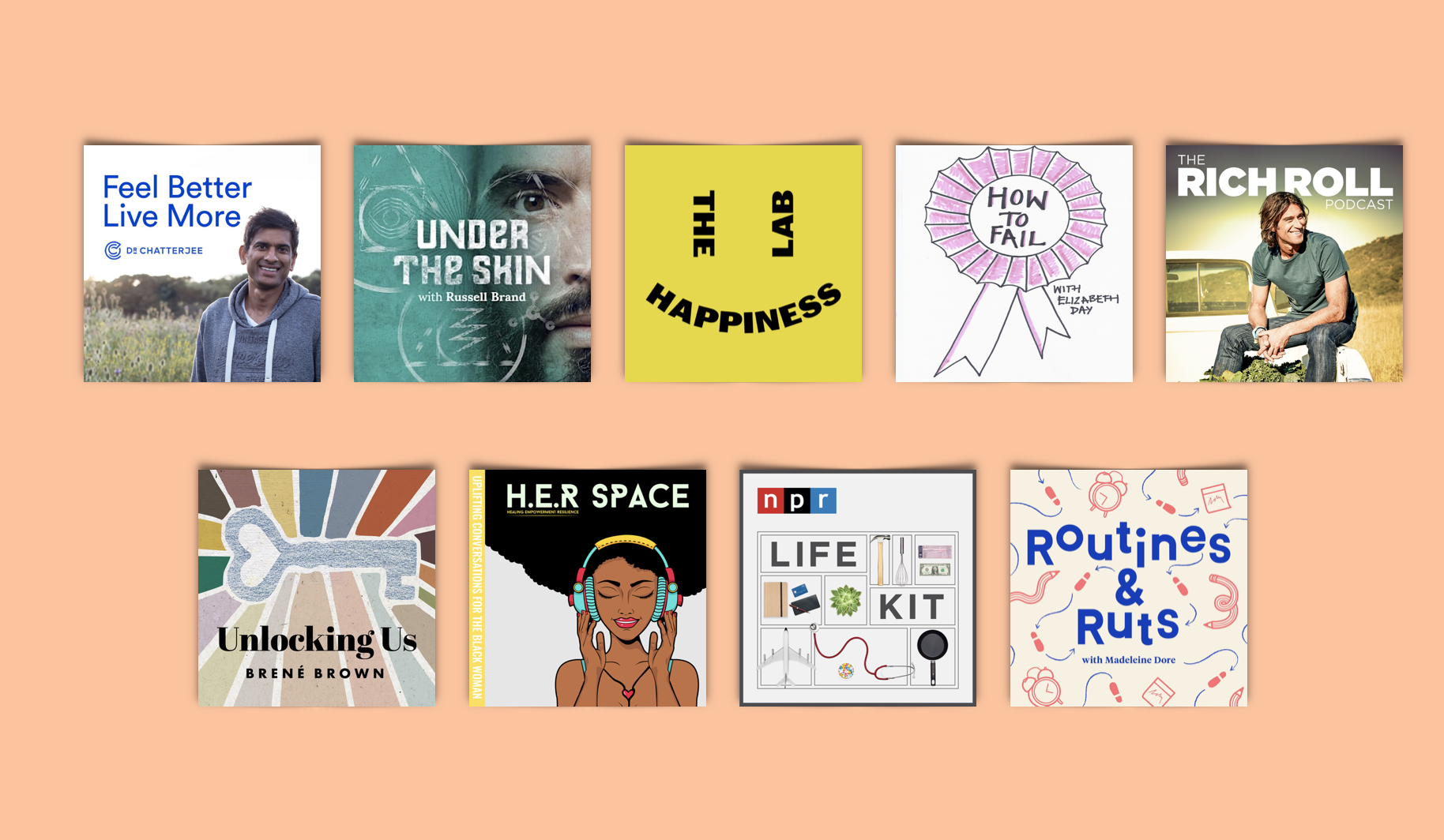 Delving into the self-help genre is a pursuit that requires a new vocabulary. “Healing modalities,” “self-actualization,” and “human design” have become commonplace terms in the category, one that has gone beyond simply helping people overcome issues like anxiety and addiction. Self-help is now about productivity, discipline, even resisting the natural process of aging. And, of course, it’s about the Morning Routine.

Future generations will likely reflect on our obsession with cold showers and intermittent fasting the same way we puzzle over the practice of human sacrifice (“the wise man told me to do it”). Often, the things that truly make us feel better can become lost beneath a capitalist framework that prioritizes efficiency and performance over pleasure and contentment. What if we renamed procrastination “imagination time?” What if the secret is to pause the podcast and sit, at least momentarily, in silence?

What advice will resonate varies wildly from person to person. Just because I don’t personally care for loud, middle-aged men yelling about bio-hacking doesn’t mean it won’t change your life. But these sorts of podcasts, the Tim Ferriss copycat shows, are already widely recommended. In the oversaturated genre of self-help podcasting, it can be hard to find show that provide space for sharing opinions, rather than establishing a single ideological platform. Here are nine self-help podcasts that will inspire you to rethink how you currently live, without requiring you to drink butter or pay $100 to enroll in an online mentorship program.

Dr. Laurie Santos, the host of The Happiness Lab, is a Professor of Psychology at Yale. Although many of her episodes focus on improving the mental health of college students, her discussions on stress are applicable to anyone participating in the rat race we call society. Occasionally reminiscent of a TED Talk, the show’s tone is similar to that of the sorely missed The Cut on Tuesdays. Dr. Santos knows how to make a compelling speech. She presents a comprehensive tool kit in a format that will appeal to those resistant to other forms of “New Age” thinking, making concepts like meditation accessible to those who need it most.

With a no-frills formula focused only on tried and true advice, NPR’s Life Kit series is essential self-help listening. The show’s topics are diverse, ranging from how to talk to kids about our turbulent news cycle, to how to find yourself a mentor or get more sleep. I stumbled across Life Kit while waiting for the right moment to tell my then manager that I was leaving my job — and also the country — in a matter of weeks. Timing was everything: too soon and I might be passed up for useful training; too late and I wouldn’t be able to smoothly transition my replacement. Some procrastination web-surfing brought Life Kit’s episode “Want to Quit Your Job? Here’s How to Do It Well” onto my radar, but the fact it had produced such a fitting episode shouldn’t be surprising. Much of the advice the podcast offers is obvious, far from the secrets of bio-hacking and “dopamine fasting.” But I’d argue this is part of its value.

The pace and consistency at which Rich Roll releases his podcasts, many of which are over two hours long, could be viewed as a reflection of his dedication to long-distance running. At 53, Roll is a plant-based ultramarathon runner whose popular podcast recently surpassed the 500-episode mark. On The Rich Roll Podcast, Roll provides a platform for scientists, athletes, and thought leaders to share their views in a conversational setting which finds a balance between relaxed and rigorous. Roll is an excellent interviewer, putting his guests at ease, yet never shying from challenging their ideas. Speaking with the likes of recovered addicts like Amy Dresner to former Navy Seal David Goggins, Roll encounters all of his guests with a believable sense of empathy. The sun-tinted vibes of California saturate his show, which are juxtaposed with Roll’s past experiences with alcoholism and addiction. For an insight into his vast archives, start with the show’s yearly highlight episodes.

Under the Skin with Russell Brand

Russell Brand’s development from promiscuous addict to spiritual guru is almost too bizarre to believe. His personal evolution was documented quite publicly, and it is perhaps because of this exposure that thousands have followed him into this new realm of “consciousness.” His experiences inform his discussions on the show, which feel intuitive and provoking in a way that appeals even to those who aren’t a fan of his political ventures. His recent conversation with Brené Brown is one of his best, the flow of their discussion revealing new elements to two personalities we thought we had figured out.

Hosted by Dr. Dominique Broussard and Terri Lomax, H.E.R Space intends to give women of color a resource to inspire them through conversation. An acronym for Healing, Empowerment, and Resilience, H.E.R addresses universal issues, such as one’s life purpose, through a lens of a particular experience. It’s a valuable and refreshing approach, as these existential topics often aren’t discussed alongside the nuances of gender or race. Broussard, who is a psychologist, and Lomax, who is a motivational speaker, make for an effective hosting duo. Their subjects range from the practical, such as the importance of assertiveness, to the magic of manifesting your dreams and goals. Listening to their weekly episodes feels like having a coffee with two highly successful friends, and I defy you to leave uninspired.

Dr. Rangan Chatterjee broke into the mainstream following the success of his bestselling books on stress and nutrition. What makes him effective as a podcaster is not merely his eloquence, but also his softer approach to interviewing. Where other hosts dictate into the microphone, Chatterjee questions everything, facilitating discussions with a unique mixture of scientific skepticism and New Age optimism. This style makes the topics he covers accessible to those at the beginning of their health journey, yet the discussions contain a depth that will attract even self-help veterans as well.

How To Fail With Elizabeth Day

Elizabeth Day’s How to Fail explores self-improvement through her interviewees’ worst moments, asking us to find lessons in our challenges. Her attempts to humanize the rich and successful work for the most part, although many of her guests overlook the benefits they’ve received coming from a privileged background. But the show offers an alternative look at career development, with Day’s experience in media giving it substance. Whenever I ask friends to recommend self-help podcasts, How to Fail is invariably mentioned. With an unexpected guest list and an approach that isn’t focused on self-aggrandizement, How to Fail’s success should come as no surprise.

If you’re the sort of person who looks for life inspiration by scrolling through Instagram, then Routines & Ruts will speak to you on an aesthetic level. But don’t let its cutesy imagery fool you; there is much of concrete value in this new self-help podcast. Host Madeleine Dore is the woman behind Extraordinary Routines, an interview project examining the everyday patterns of the creatively-inspired. On her website, Dore conducts experiments designed to test out concepts like “digital detoxing,” but her podcast is a platform to broadcast the conversations she has with writers, artists, and designers. It is a well-executed concept that is original enough to make the dull reality of other people’s daily routines intriguing. Dore acknowledges that different techniques work for different people.

Unlocking Us with Brené Brown

In what feels like a long-overdue career development, the author and professor Brené Brown is transitioning from podcast guest to podcast host. The first episode Unlocking Us debuted last month with the theme of “FFTs,” or “Fucking First Times,” as Brown explains. It’s a great place to start. By discussing the anxiety that comes with starting something new, she expounds on an experience that’s universally relatable. The success of her Netflix special last year proved that Brown’s personality works well beyond the written word. Her voice sounds authentic, and she uses it able to bridge disparate topics such as science and spirituality. Unlocking Us does a great job of developing her theories on vulnerability and courage, and has arrived as a timely comfort during our current crisis.

Alice Florence Orr is a staff writer for Podcast Review and is based in Melbourne. Her work has appeared in Scottish Review, Like The Wind, and Nomad Journal. You can connect with her on Twitter or Instagram.