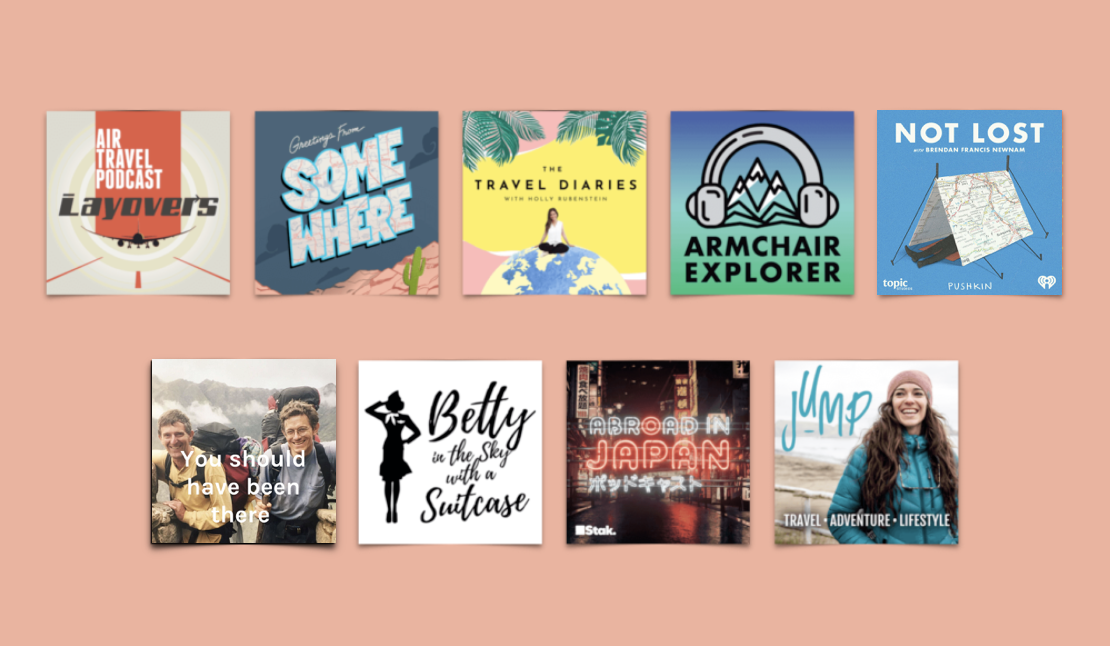 The landscape of tourism will change in the coming decade, and I’m not just talking about Venice being underwater. Before the pandemic, back when the worst thing you could catch on a plane was food poisoning, we traveled to find connection, discover new cultures, and take out our anger on taxi drivers who sped away with our change. The appeal of travel was just as much about risk as relaxation, making it mildly concerning that many travel podcasts end after only two or three episodes.

So now you’re looking for a recommendation, a bit of local knowledge to tell you which of the countless travel podcasts are worth your time. A good travel show must do one essential thing: transport its listener to a new destination, whether that place is the Serengeti or a state park outside of Sacramento. Each podcast on this list captures, in its own way, the thrill of an adventure. By effectively adapting their formats during the pandemic, they prove there is longevity to the travel podcast format, no matter what turbulence comes their way.

You don’t have to like flying to enjoy the Layovers podcast, but it definitely helps. Centered around air travel, the show takes what might be a niche subject and turns it into an entertaining lens through which to analyze geopolitics and current affairs. Where many podcasts zoom in when exploring a topic, hosts Paul Papadimitriou and Alex Hunter zoom out, giving a broader view of the global map. For example, in a recent episode, Paul and Alex ask if we might have been in a golden age of international travel and didn’t even know it. How do we move forward in an era of infection and tighter borders? How will political tensions affect free movement? These are the sorts of questions we’re all asking, but Layovers isn’t afraid to answer.

A British podcast with international appeal, The Travel Diaries is a globe-trotting weekly interview series. As one of the most popular travel podcasts the in the UK, host Holly Rubenstein has access to the country’s best-loved actors, writers and personalities, including Sir Michael Palin and that chap from Downton Abbey. Her format is simple but effective. From their earliest childhood memory to their most formative experience abroad, the show’s guests recount their best travel stories through a seven-chapter narrative. Through the unfolding lives of some of Britain’s great storytellers, the show transports you to new places by way of moments of reflection and insight.

Betty in the Sky with a Suitcase

The premise of Betty in the Sky with a Suitcase would be apt for a movie, not just a travel podcast. Through her anonymous broadcasts, a glamorous international flight attendant describes her encounters with characters 30,000 feet above earth. Under the pseudonym Betty Thesky, the show’s host is a veteran of the sky with old-school style. You might come to Betty for her practical advice, like how to beat jet lag, but you’ll stay for her tales from the sky. With the current trend for deep analysis, her stories are endearingly unstudied, but the last thing you should do is underestimate her. Following in a long tradition of travel writers like Joseph Roth, Betty takes travel vignettes off the page and into the airwaves. Her show is patchwork of anecdotes, readings from her old diaries, and interviews with fellow flyers — but somehow, mixed with her charming personality, the melange seems to work.

Pushkin has discovered a winning formula with Not Lost, a travel show hosted by podcasting veteran Brendan Francis Newnam. You might know him from The Dinner Party Download or perhaps from his writing for The New York Times Magazine and Saveur. After ending a long-term project (and a long-term relationship), Newman decided to do what many of us would in his situation: start a podcast. Just kidding… he embarked on a foodie adventure in some of the world’s best culinary destinations. The podcast, I’m sure, was just an afterthought.

Not Lost employs an effective mix of auteur direction, snappy writing, and spontaneous comedy — and that’s before you get to the heart of the show, food. A co-production of Pushkin, Topic Studios, and iHeartMedia, the show is as slick as you would expect; any sense of “rough-and-ready” adventure is purely varnish. At its core, Not Lost celebrates people, stories, and the rapidly changing world that can only be experienced through extensive travel. With episodes recorded from Portugal to Las Vegas, this is another great listen for Bourdain fans.

Armchair Explorer is an established travel podcast with a simple philosophy: the best travel stories are told from the road. Hardly a secret, this show comes highly recommended, but you need only delve into a few episodes to figure out why. As an award-winning travel writer and journalist, host Aaron Miller delivers tales of adventure together with his signature commentary, embracing a documentary-style format. Armchair Explorer isn’t interested in rambling interviews — only travel-hardened explorers make it onto the show. Immersing you in far-fetched tales from the earth’s distant lands, Miller’s guests recount their best travel stories through clever editing that cuts straight to the action. Try the episode with Alice Morrison, a nomad who walked the entire length of Morocco. Her story is captivating, a tale about the harshest deserts in that part of the world, but her spirit is admirable and genuinely inspiring.

You Should Have Been There

You should have been there is a hidden indie gem from across the pond, with a name that pokes fun at the obvious fact that no travel podcast will ever make you feel like you were actually there, but that doesn’t mean this pair won’t try. Hosted by journalist Simon Calder and BBC producer Mick Webb, this is a show that isn’t afraid to get a little erudite about adventure, exploring an impressive range of topics, from layover-friendly airports to an entire episode dedicated to the niche subject of “psychogeography.” Walter Benjamin, anyone?

Calder and Webb have natural chemistry. Sure, the audio quality is basic, but what the show lacks in volume, it more than makes up for in clarity. The show is meticulously scripted, but that’s hardly surprising given its hosts’ experience. By combining the enthusiasm of a kindly neighbor nattering about his caravan with the delivery of professional radio presenters, You should have been there can seem a touch more of a ramble than a romp. But that’s exactly what makes it delightful. Of course, I’d love to be walking the Pyrenees with Calder and Webb, but their show does something rare: it makes me feel totally comfortable just where I am.

Chris Broad and Pete Donaldson’s cult podcast grew from a mutual fascination with their new home. Abroad in Japan isn’t what you might expect from a travel podcast, but who said adventure only comes from fleeting visits? Living abroad is an immersive way to understand and appreciate the delights of another culture, and these British guys are ready to dive deep into all the nerdy parts of Japanese life. But Chris and Pete aren’t just any old expatriates. Chris is an award-winning filmmaker. Pete’s an accomplished broadcaster. Together, they spend their free time bringing their podcast listeners a taste of a dynamic and complex country through travel tips, current events and topical reports. Why are $75 Tamagotchis making a comeback? What is it like in the country’s worst Love Hotel? And, most importantly, how much do you tip? No, they’re not locals, but Abroad in Japan brings an outsider’s eye to a fascinating country many of us have always wanted to discover.

Zach Mack is road tripping through America. From the first green light, Greetings From Somewhere has proven itself to be a slick production, blending travel narrative with investigative journalism. With flavors of Anthony Bourdain’s Parts Unknown, Mack takes his listeners on an immersive journey through some of the country’s most engaging destinations. The first episode, “Marfa TX,” sets a high bar for the rest of the series, and it’s clear that Mack is no amateur. By detailing the town’s history and exploring its controversies, the show neatly weaves interviews with local characters into an addictive narrative.

As everyone who has read Steinbeck or Kerouac will know, life on the road has become a fixed part of America’s mythology. In his episode “The Myth of American Road Trip,” Mack deconstructs these tropes, asking us why, with so much displacement and inequality around the world, we still romanticize this lifestyle. These “detour” episodes add an extra dimension to an already multifaceted show — a real breakout star of the genre.

Since 2014, Jackie Nourse has been a mainstay of travel podcasting. First, she was host of the Budget Minded Traveler, a show dedicated to the noble pursuit of cheap travel. Now, Jackie has expanded her podcast to include an online community and travel programs with one clear message: if you want adventure, you have to take the jump. With her new vision comes a new name, though Jackie’s focus remains making travel affordable for those willing to plan ahead and make sacrifices.

Of course, there are more barriers to adventure than just the show’s call to action might suggest, but Jackie isn’t naive. Despite her sometimes-rambling delivery, she addresses her listeners’ concerns on topics like financial viability and safe solo travel with confident pragmatism. If you are embarking on a budget trip around the United States, JUMP will have particular appeal. With dozens of episodes on destinations including Utah, Oregon, and Southern California, the show is just the ticket for aspiring adventurers.