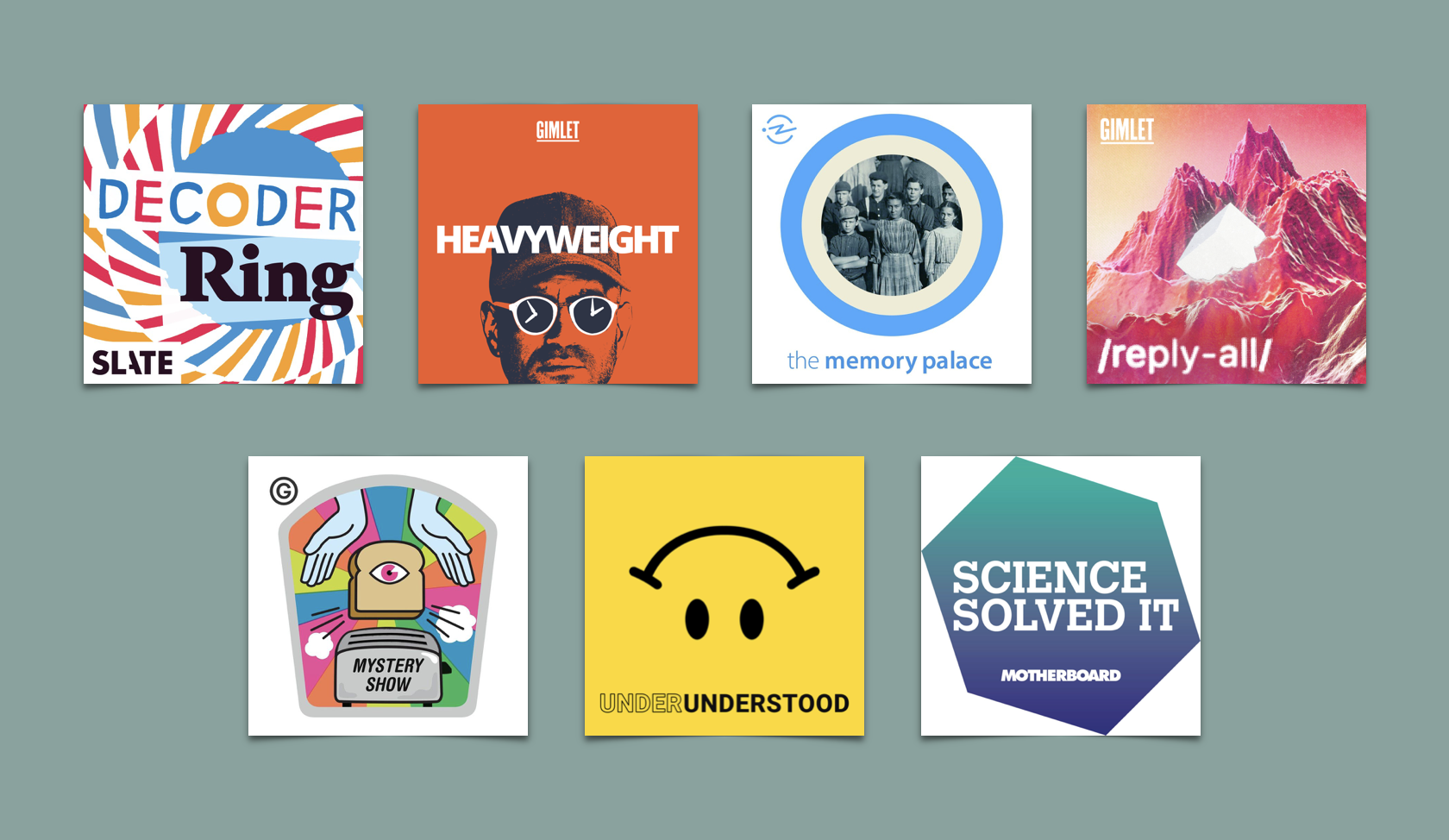 The words “long, meandering mystery podcasts” likely bring specific shows to mind, shows that present a mystery and spend hours on it, only to admit in the end that, even after tremendous amounts of research, interviews, and experiments, some things are just unknowable. Many podcasts that fit this description are acclaimed and beloved. But, sometimes, you just want to know the answer.

Perhaps you’re also seeking a mystery with lower stakes than murder. There is something really charming about podcast teams treating, say, M&M McFlurries with the level of sincerity they would any other major story, wielding the full resources of their journalists and fact checkers to get to the bottom of when and why McDonalds stopped blending the toppings into this frozen dessert.

The following investigative podcast episodes are self-contained stories that stray from conventional true crime but are gripping nonetheless. By the end, the question each episode poses will be answered. None of these episodes will leave you in frustration, wondering, “But, what happened?”

Starlee Kine, the host of Mystery Show, takes on cases from people with nagging questions in their lives that can’t be solved using the Internet. This episode centers around Carson, who wants to solve a mystery about an object he has carted around since childhood: a belt buckle a friend of his once found in the street. It’s an intricate and unique art object, featuring a breakfast scene of miniature eggs and a toaster that actually pops out tiny pieces of toast when you press a button on the buckle. Carson has always wanted to find a way to return this special object to its original owner, so he enlists the help of Kine, who sets out to answer the following questions: who did the belt buckle belong to? How was it lost? How will the person react to getting it back? Her only lead is the two names engraved on it, a very small clue. But it proves to be enough to track down the owner and origins of the belt buckle, involving decades-old newspaper articles, a message board, an art teacher, several chefs, and other surprises along the way.

On Heavyweight, host Jonathan Goldstein helps people work through unresolved interpersonal experiences. Often, as is the case in this episode, the show deals with moments that may appear small but left someone wrestling with lasting hurt and questions that haven’t been answered. Becky and Jo, two sisters with Hollywood producer parents, grew up with a series of babysitters who came and went over the years. One babysitter, Leticia, who the sisters deeply loved, didn’t show up to pick them up from school one day. They never saw her again. Her disappearance shattered their sense of safety, leaving them with abandonment issues that affected their relationships with subsequent babysitters and romantic partners. Twenty years later, Goldstein gets to the bottom of what happened to their favorite babysitter, whom he tracks down from scraps of information about Leticia found in the girls’ childhood diaries. Leticia explains what happened to her that day and what was going on in her life at the time. It’s a healing experience for Becky and Jo, who’ve spent decades wondering what they did wrong to drive her away and finally realize the answer was always, nothing.

On Decoder Ring, host Willa Paskin investigates cultural artifacts and phenomena in order to “figure out where it comes from, what it means, and why it matters.” This episode asks, what happened to the laugh track? If you’ve ever watched Seinfeld, Friends, or any classic sitcom, you’re familiar with the laugh track, probably to the point that you don’t even really think much about it–the sounds of a live studio audience can feel like punctuation. But sometime in the early 2000s, the laugh track disappeared from sitcoms, a shift brought about by clever, fast-paced comedies like Arrested Development and The Office. In this episode, we hear from a variety of television historians, enthusiasts, and writers, who dive into the history of the laugh track. Paskin explains how the laugh track helped audiences of early television shows understand what they were seeing and feel like they were a part of a larger communal experience. We meet hobbyists who add laugh tracks into newer shows, treating it like the art form and with the seriousness its creator intended. You’ll be left with a greater appreciation for something you may have given little thought.

Science Solved It, “Don’t Be Alarmed, But the Rocks Are Crawling”

Science Solved It is a show that explains, well, interesting ways science has been used to solve confounding phenomena. Here, the question is how do giant boulders (dubbed “sailing stones”) located in Death Valley National Park move significant distances on their own? This mysterious occurrence was first documented in the early 1900s, and the first scientific study of the rocks took place in 1948. It was inconclusive, which led to speculation that there might be something supernatural at hand. It turns out there’s a perfectly reasonable explanation, it just took scientists until 2014 to get it. Listen as host Kaleigh Rogers talks to the scientists who cracked the case explain the methodology and experiments that got to the bottom of exactly how the rocks move from place to place.

You’ve certainly been on the receiving end of a spam phone call. You may have let it go to voicemail, or maybe you answered and hung up when you realized the caller wasn’t anyone you knew. But what you almost certainly have not done is what Alex Goldman does in this two-part episode of Reply All: had an in-depth conversation with the person on the other line about the scam. He asks the questions everyone wants to know. What’s the scheme here? How rich are they getting from this? Don’t they ever feel bad about tricking people out of their money? In order to learn exactly how this spam call center operates, Goldman repeatedly calls them to talk to its employees, and eventually develops a rapport with someone who invites Goldman to visit him in India. So he goes to India and collaborates with a local reporter who helps him get interviews, translates, and poses as a prospective interviewee for a job with the call center. There are times when they seem to be in genuine danger, and others when it feels like they aren’t any closer to learning a thing, but ultimately Goldman and his team bring clarity to the questions they set out to uncover. There’s even a third part to the episode series that came out three years later, where the story gets even weirder, and more clear, with new information.

Each episode of The Memory Palace centers on a different bit of history, skillfully written and read by Nate DiMeo. “Snakes!” tells the story of when residents of Springfield, Missouri kept discovering Indian cobras all over town during a several month period in 1953. DiMeo does not do any investigating here, as the case has long been closed, but his research, writing, and use of music vividly bring this story to life, with a quiet sense of humor (unsurprising when you learn that one of DiMeo’s other credits is as a writer for Parks and Recreation). It’s still a satisfying mystery, though you may find yourself so drawn in by the storytelling that you forget there even was a question until the very end, when the matter of where snakes came from is finally settled.

The premise of Underunderstood is that “the internet doesn’t have all the answers. But that doesn’t mean we can’t find them.” Many episodes ask questions about food (the McFlurry example above comes from this show), and this episode is no exception. When a woman’s checked bag is delayed by an airline, she is left with a few burning questions. Where are her bags and when will they arrive? And will the food in her bag—three-and-a-half pounds of frozen green roasted chili peppers–be safe to eat after three days? The Underunderstood team works to untangle the web of mysterious third-party companies that airlines contract to deliver delayed baggage to their customers. They recreate the bag’s entire journey from New Mexico to New York City and estimate the temperature fluctuation the chilies likely experienced as they traveled. We hear from airline employees, baggage delivery workers, and food safety experts who all help answer the question: is it safe to eat those chilies?

Kerri Sullivan’s writing has appeared in McSweeney’s Internet Tendency, The Billfold, and elsewhere. She is currently editing an anthology of writing, comics, and artwork about New Jersey forthcoming from Rutgers University Press.