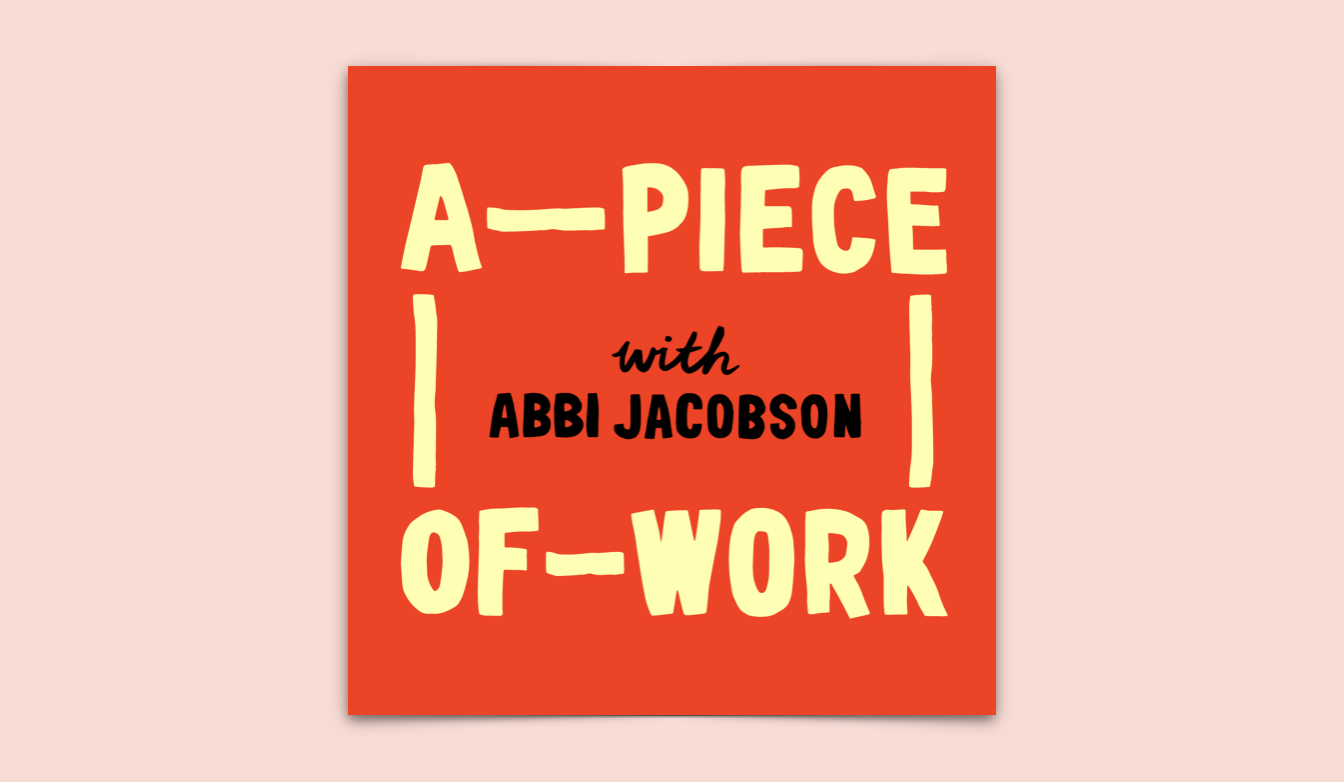 A teacup covered in gazelle fur. A canvas painted entirely blue. A video in which dancers, clothed in skimpy strands of meat and fur, writhe on the floor and stroke dead, feather-plucked chickens. What does it all mean? This is the question that comedian Abbi Jacobson and a crew of her celebrity friends unpack in A Piece of Work, a podcast that wants to make modern and contemporary art approachable.

In ten twenty-minute episodes, Jacobson talks us through a sampling of the greatest artworks in the collection of the Museum of Modern Art in New York (MoMA). The museum—a breath of humanity in Manhattan’s sterile Midtown—has influenced the contemporary art world since 1929, when it was founded by Lillie P. Bliss, Mary Quinn Sullivan and Abby Aldrich Rockefeller, better known then as “the daring ladies.”

As Jacobson wanders through MoMA’s white-walled maze, she chats with art experts and A-list celebrities. The result is light art history lessons enhanced by the delicious comments of drag queen RuPaul (“If it’s [the art’s] got naked people and big, fat asses, I’m in”) and comedian Hannibal Buress (“That just looks like some high shit”).

The celebrities’ role as bait to reel in more listeners is entirely unsubtle but amusingly so. It’s a clever idea and one that seems to have worked. A quick scan of listener comments on Apple Podcasts reveals dozens of people who claim a renewed desire to look at modern art and visit museums. For this alone, A Piece of Work is a noteworthy success.

Ever since 1917 when French artist Marcel Duchamp bought a porcelain urinal, painted the words “R. Mutt” on its side and called it art, critics, curators and artists have had to explain modern art’s right to be in the same museums as paintings by Rembrandt, Leonardo da Vinci and Monet. This confusion that modern art often provokes has had the unfortunate side effect of making the art come off as elitist. As one MoMA visitor says to Jacobson, “Is this something that you have to be ‘enlightened’ to understand?”

While modern and contemporary art might seem pretentious to many viewers today (and some of it definitely is), certain modern artists created their works to challenge the snobbery they saw in the art world. Duchamp (urinal guy) rejected the accepted definition of art that had been set by critics and patrons. They claimed that art had to be beautiful and technically challenging. Duchamp wanted art’s definition to be something that artists themselves could reclaim and play an active role in shaping.

Another example is the Russian artist El Lissitzky. Beginning in the 1920s, Lissitzky painted posters with the most basic geometric forms—squares, circles, triangles—and basic colors— black, white, red—for the burgeoning Soviet government. He believed artists should reject past, bourgeois art history and create new symbols in service of the people. Robert Smithson, an American artist active in the 1960s and very early 70s, made art in nature so that he could be freed from the institutional walls of the museum. In other words, much modern and contemporary art was and is created to be critical of elite institutions – of museums, of the art market, of capitalism and of government.

A Piece of Work touches on these ideas (it touches briefly on many ideas), but its main goal is to make art fun. That’s why the show’s co-producers MoMA and WNYC Studios chose Abbi Jacobson as the host. She’s young, witty, and the star of the hit Comedy Central show Broad City about two twenty-something women trying to make it in New York City – and frequently failing.

Jacobson also has art cred. She studied fine art and video at the Maryland Institute College of Art (MICA), one of the highest-ranked arts colleges in the nation. Today, she draws Broad City’s fun, trippy intro scenes, and in 2016 she published a book of illustrations called Carry This Book, which both critics and book-buyers greeted warmly. Even after four years of art school, Jacobson admits that she also struggles to understand modern art. In short, she is the ideal translator for MoMA’s collection.

While A Piece of Work is a bang-up success for art newbies, it offers little new information for art nerds. Still, there is the occasional cookie. Like an interview with Ellen Davis, a MoMA conservator who talks about restoring an Yves Klein blue painting and how looking at that one color for six months can simultaneously enchant you and drive you nuts.

Jacobson also talks to Martine Syms, one of today’s standout artists whose videos, text art and performances cover themes including memory, Afrofuturism, and queer theory. In one of the best episodes of the podcast, “Writing on the Wall,” Syms talks about using humor in her art as a way to examine weighty issues. She calls humor “a complicated register” that allows her to “hold two opposing ideas together at the same time.” Meaty ideas like these give A Piece of Work edge.

A word of advice if you’re an art buff: skip the first two episodes. In these, Jacobson tries hard to win over art rookies – which is great. Unfortunately, she does so by hamming up her script. In every other sentence, she chooses a word to exaggerate. “The painting DOES kind of look like when you give a kid a crayon and a piece paper and they just really go to town.” And on Jackson Pollock’s drip paintings: “It’s not messy and chaotic. Or maybe it IS those things, but that’s because life is that way sometimes.”

Once the third episode rolls around, however, things get much better. Jacobson hits her stride and the featured celebrity, musician Ahmir Thompson or Questlove, offers some of the most memorable insight in the series. The episode is about minimalist paintings: canvases that are a single, solid color or are covered with the smallest sampling of shapes. Thompson says this kind of art can be a tool for meditation. Today, our senses are constantly bombarded by neon lights, colorful billboards, traffic noises and iPhone alerts. Art that asks us to focus on just one image— and more specifically just one color—asks us to slow down. The world tells us to “fill up our minds,” Questlove says. “The problem with that is that there’s an amount of silence that you need so that you can hear ideas that are given to you.”

A Piece of Work should have heeded Questlove’s advice. Sometimes the show stuffs in too much information and doesn’t leave the listener (or the interviewees) with room to think. Instead of talking to four people in 20 minutes, why not interview two? There are so many moments when Jacobson and her guests reach a really tantalizing idea and they’re playing it out and then it’s on to the next interview. For instance, right after Syms drops her alluring idea about humor, the episode ends. Contemporary art is indeed supposed to leave us with provocative, open-ended questions, but this episode leaves us wondering, “What if Syms had been able to talk longer?”

MoMA, WNYC and Jacobson have not announced whether they are planning a second season. Hopefully, they are. With the basics covered and a posse of new art converts in tow, perhaps the podcast team will start to tease out the art’s nuances and slow down.