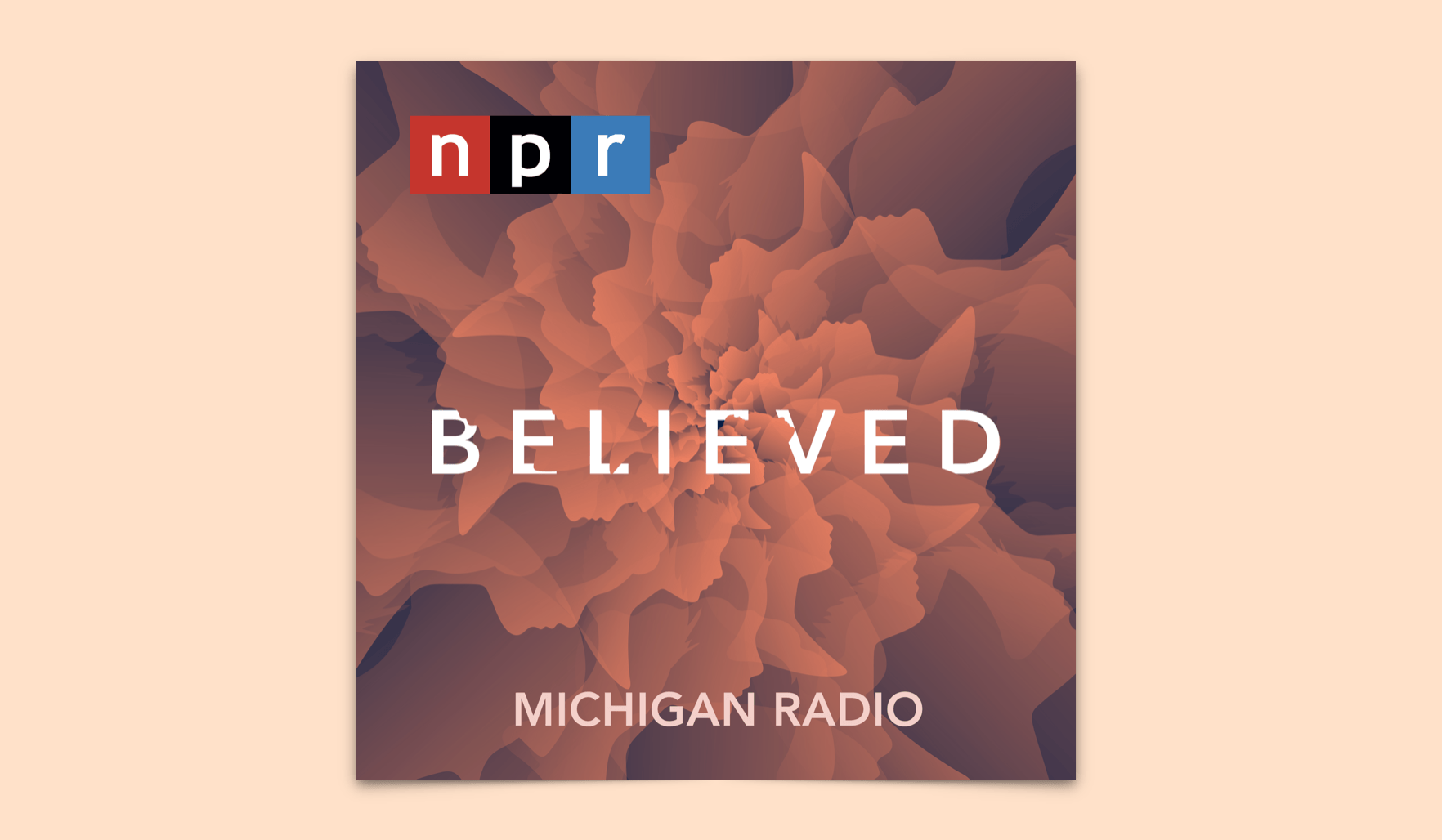 W
hat’s at stake when we fail to believe? That’s the central question driving award-winning reporters Kate Wells and Lindsey Smith as they investigate and unpack the lasting effects of the Larry Nassar case in the new podcast Believed, from Michigan Radio.

In case you missed it, Nassar is the former Olympic gymnastics doctor who sexually abused hundreds of patients for more than 20 years. As you navigate through the deeply-reported and emotionally-taxing stories of abuse, you’ll find yourself — early and often — talking out loud. As the series progresses from first-person accounts to details about “How He Got Away” (episode two), that talking becomes yelling — as in “WHAT?!” or “What do you mean an erection seems OK to you during a medical treatment?” Or, later, during the critically-important “The Parents” episode: “Try listening to your child when she speaks up!”

The anger and frustration might seem like natural reactions, of course, to something so horrific, so heartbreaking, so unbelievably heinous that it’s difficult to imagine how or why anyone going through it in real-time would react any other way.

And that’s precisely the point of taking a moment to listen now — even if we couldn’t or wouldn’t before. What’s revealed directly through the voices of the women who were there during Nassar’s rise and fall is just how much we as parents, athletes, daughters, and students sometimes want to believe — more than anything else — that everything is OK. That the ugliness isn’t real. That the abuse didn’t happen to us or those we love. That it couldn’t have happened.

Wells and Smith realize it’s important to go back to the beginning to try to understand why so many girls and young women telling the truth weren’t believed, while Nassar — telling lies about his ‘treatments’ — was. In the first episode in the series, “The Good Guy,” they take us back to 1996, when the U.S. women’s gymnastics team was on the verge of making Olympic history by winning a team gold medal — something no other women’s team had done before.

As you might remember, Kerri Strug, one of Bela and Martha Karolyi’s star pupils, had fallen and injured her ankle on her first vault. And when she successfully landed her second vault — on one leg, no less — the crowd went wild as she saluted the judges before limping in agony off the mat.

And who was there to rescue her? The young trainer, Larry Nassar.

I remember the moment well. It was magical and inspiring — and fueled my passion for the sport for years to come. Originally from Cincinnati, I was a dedicated competitive gymnast myself, then training at Geza Pozsar’s gym in Sacramento, California. He was the Karolyis’ former choreographer and colleague who defected from Romania with them in 1981, and (along with my beloved coach Trudi Kollar, also a former Karolyi gymnast and world champion) has since spoken out about the abuse he witnessed as a member of their staff.

For those of us close to the sport, the early reports of Nassar’s abuse and that of other coaches that had become institutionalized as part of competitive gymnastics, sadly, didn’t seem all that surprising. I grew up watching the TV movie Nadia, in which I understood Bela Karolyi’s harsh methods to largely have been the reason Nadia Comaneci was able to achieve greatness, and I had read Joan Ryan’s 1995 book “Little Girls in Pretty Boxes,” in which she chronicles the toxic culture of both elite gymnastics and ice skating. Most importantly, I knew from being in the gym for nearly 15 years that this was just the way it was. While I wasn’t physically or sexually abused in the gym (Kollar, Pozsar, and my other coaches made it a point to show there could be another way), I wasn’t a stranger to the culture that allowed it to happen.

During an interview with Wells and Smith, I mentioned my connection to the sport — and then quickly said, “but, anyway, this isn’t about me.”

But here’s the thing I’ve realized: it is about me. It’s about all of us.

“All we needed was one adult to stand between us and Larry Nassar,” said Olympic gymnast Aly Raisman on stage at the ESPY Awards this past summer.

Listening to Believed — painful as it may be — forces us to think: how could we be that one person for the next generation? What might make us listen earlier, more clearly, more openly when something isn’t right? Because as the hosts deftly point out in the series, this isn’t just about gymnastics. And it isn’t just about one monster manipulating everyone around him.

In episode eight, “The Reckoning,” we finally get to witness that moment, as Kyle Stephens takes the stand to make the first of 204 victim impact statements at Nassar’s trial last January.

“I’m addressing you publicly today as a final step, in a statement to myself, that I have nothing to be ashamed of,” she tells him. Her voice shakes as she tells the packed courtroom — and the world — what she was forced to endure as a little girl for more than six years. How it started when she was just six years old. How her parents didn’t believe her.

“Perhaps you have figured it out by now, but little girls don’t stay little forever. They grow into strong women that return to destroy your world.”

Her words are most poignant because “destroying a world” doesn’t even begin to describe what life has been like for these women. Despite being smart, talented, educated, good people, often with well-meaning parents, coaches, and friends around them, they’ve suffered what seems like insurmountable loss, including suicide, illness, eating disorders, and more. The moment is captured most indelibly when the voices of all of those who made statements are woven together later in the episode.

At last, we hear them loud and clear.

Both Wells and Smith have reported tirelessly on this case and are parents themselves. They feel a personal responsibility to try to find lessons amidst all the darkness.

Olympic gold medalist and national champion Dominique Moceanu, a teammate of Strug’s in 1996 and also now a parent, was the first elite to file a formal grievance with USA Gymnastics — the governing body for the sport — about unethical behavior. Last year, the organization released a massive report by former federal prosecutor Deborah Daniels that proved Moceanu’s complaints were not only valid, but more widespread than previously acknowledged.

In a phone interview with Moceanu last year, she spoke about what elite gymnasts understood to be a code of not just silence, but quieting of those who do speak up. She said her husband, a fellow gymnast, “always believed everything I said,” even when she felt like no one else did.

It’s why she’s particularly passionate about standing up for others fighting the same battle now.

“You don’t have to say anything bad about the organization other than ‘I support the women,’” she said. “Because the power is in the athletes’ voices. But we all have to stand together on this.”

USAG now faces revocation of its governing body status from the U.S. Olympic Committee, and recently filed for bankruptcy, a defensive move to stop the financial hemorrhaging from dozens of pending lawsuits from what now amounts to 350 Nassar survivors. It’s ironic, of course, that the institution that was supposed to protect so many has now found a way to protect itself.

Rachel Dollenhander, the gymnast-turned-attorney who was the first to file a criminal complaint against Nassar, can perhaps provide the guiding light we all need as we head into 2019 and towards a more enlightened, healthier, and safer world for our children — even if that means protecting them over our own jobs, relationships, or dreams.

“I want you to understand why I made this choice knowing full well what it was going to cost to get here and with very little hope of ever succeeding,” she told Nassar in the courtroom before sentencing in January. “I did it because it was right. No matter the cost, it was right.”

Kristin Marguerite Doidge is a writer and lecturer at Loyola Marymount University whose work has appeared in Fortune, Marie Claire, The Atlantic, and on NPR. She holds a master’s degree from the University of Southern California’s Annenberg School of Journalism. She was a 2018 LARB/USC Publishing Workshop Fellow. Connect with her on Twitter @KMarguerite_USC.