Many people openly hate reading poems. As with those who declare they can’t bear listening to podcasts, we could ask whether they simply haven’t stumbled across the right one yet. There are currently over 750,000 podcasts in circulation. I won’t try to put a figure on the number of poems that have ever been written, mostly because of the indefinable nature of the form itself. Is a song a poem? Can a text message be a poem? What about the scrawl in the bathroom stall of your local bar? Mostly, it comes down to intent. The boundaries of poetry are fluid, much like those of podcasting.

But it requires a certain type of vision to take a piece of art, especially one that relies so heavily on its written structure to convey meaning, and turn it into an exclusively audible experience. The general dislike, even fear, of poetry, combined with the difficulty of adapting it for the ear, might account for why there are far fewer podcasts about poetry than there are about fiction. You would think the myriad of shows featuring interviews with novelists and the reading of short stories would make their overall standard higher: the good ones must try harder to keep a fickle audience interested. Instead, the genre is filled with half-hearted interviews, bad audio quality, and tired formats. Poetry podcasting is where the innovation exists.

Each podcast on this list pushes the edge of convention, rethinking clichés and creating an expansive listening experience as a result. It is an essential aspect of poetry that we dwell on the rhythm and imagery of the language, not being distracted by rattling microphones or boring lines of questioning. This list is comprised of the shows that allowed me to hear the emotion behind their words. Here are the seven best poetry podcasts. 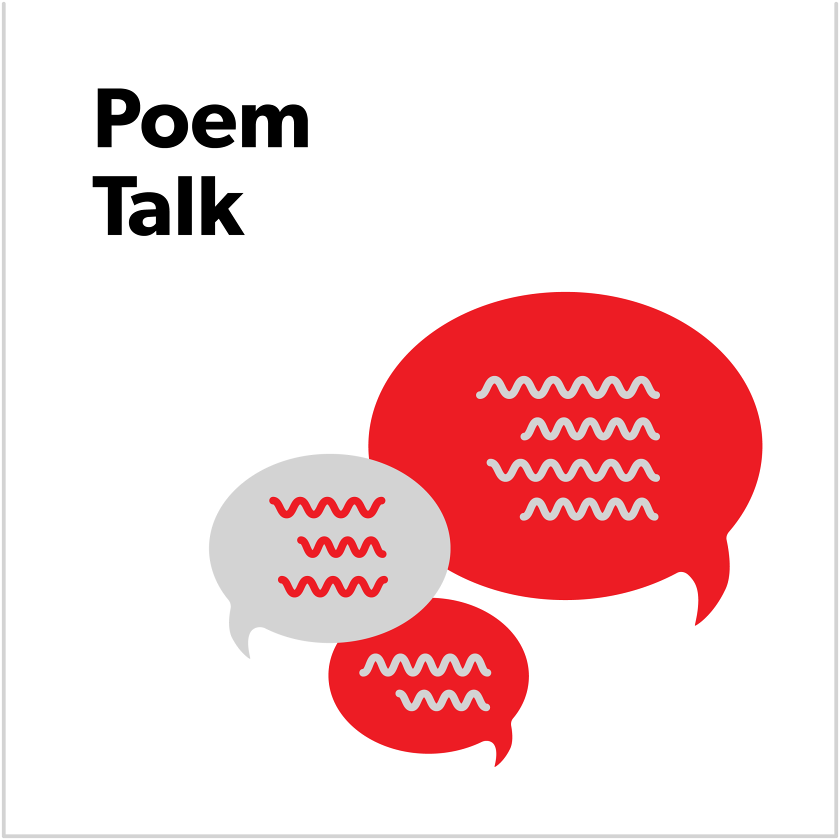 In his book The Hatred of Poetry, the poet and novelist Ben Lerner writes, “And when you are foolish enough to identify yourself as a poet, your interloctors will often ask: A published poet? And when you tell them that you are, indeed, a published poet, they seem at least vaguely impressed.” The need for legitimization in the sphere of poetry might explain why all the speakers who appear on Poem Talk are aggressively qualified. Often the requirements placed on podcast guests are limited to their social media followings or their proximity to a large, metropolitan city. But the guests on Poem Talk, a production of the Poetry Foundation, list their awards and residencies, not their Twitter stats. The soft, assured tone of their discussion is bolstered by their credentials. Rarely is a sentence misplaced, a comment overwrought.

Hosted by the faculty director of the Kelly Writers House, Al Filreis, Poem Talk is a roundtable of the sort familiar to those privileged enough to attend university seminars. One could argue that the show, with the sincerity of its seriousness, reinforces the airs of inaccessibility around poetry as an art form. Yet Filreis anchors the discussion in a warmth that steers the intellectualism away from alienation and towards friendliness. The show doesn’t doubt the intelligence of the listener. Rather, it opens up language and metaphor in a nuanced way, adding genuine value to the poems discussed. The poets featured on the show are various yet canonical: from Emily Dickinson and Walt Whitman, to Kathy Acker and Mei-mei Berssenbrugge. They cover celebrated classics and forgotten pieces, rekindling a curiosity around poetry that the listener may have let go of since leaving college. Poem Talk’s intention may not be to cause a spike in applications to literature grad programs, but I’d put money on it being an accidental consequence. 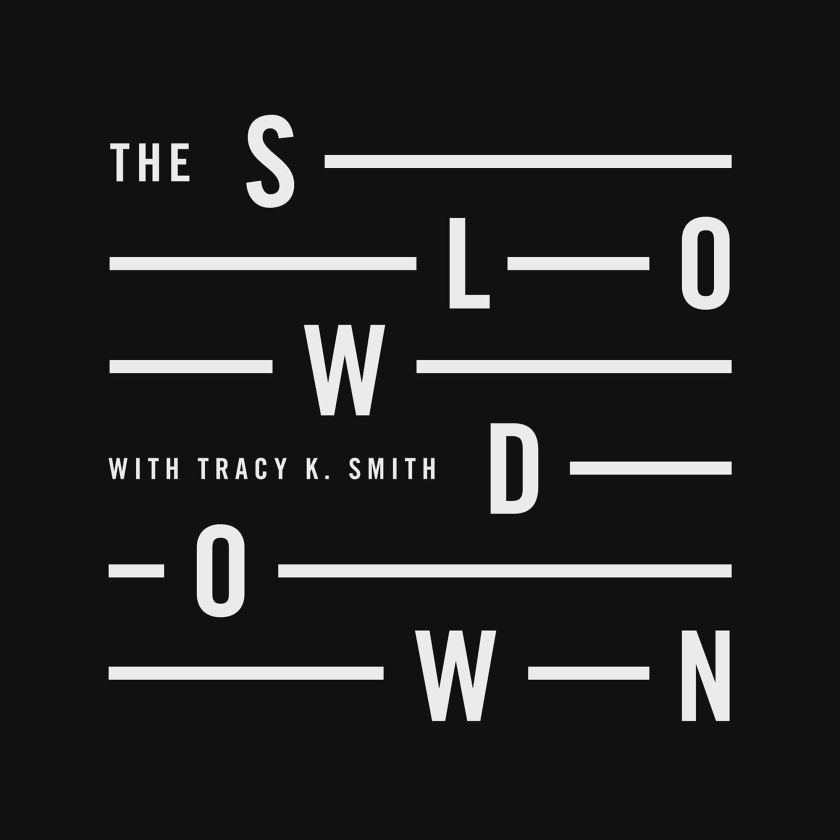 Hosted by the recent Poet Laureate Tracy K. Smith, The Slowdown is an innovation in an oversaturated genre. The episodes rarely extend beyond the five-minute mark, making them an inviting cup of tea rather than a full meal. Created and produced by a team that is comprised entirely of women and mostly people of color, the podcast’s perspective departs from the Western canon and global, contemporary poets feature as frequently as the usual suspects. Smith provides a brief but thoughtful introduction to each poem, taking the show from soothing sound bite to provocative pause. And yet the steadiness of her voice sometimes guides me into such a state of meditation that I’ve often awoken from my thoughts to realize I’ve missed the poem entirely. Fortunately, the episodes are concise. I simply play them back from the beginning to enjoy them all over again.

The gentleness of the podcast’s tone and the sweetness of its soundtrack should not fool the listener into believing the poems Smith recites are without grit. Like all good pieces of art, they challenge despite their beauty. With over two hundred episodes, the show is a fantastic resource, and a true break from the cacophony of life.

Listen to: Episode 182: Writing a Poem; Episode 157: To the Woman at the United Airlines Check-in Desk at Newark 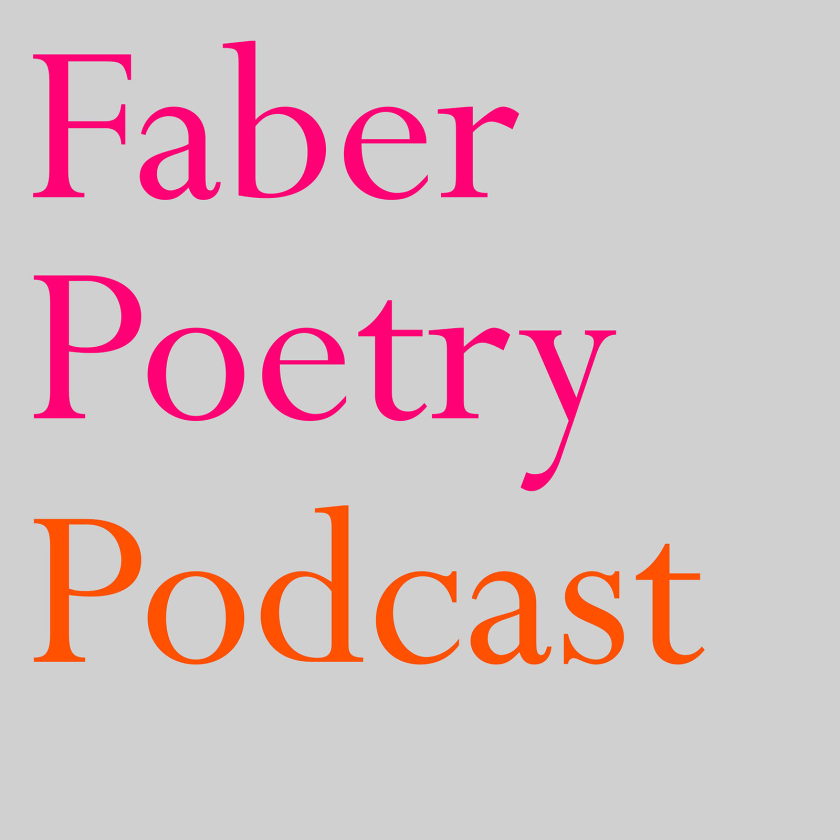 The Faber Poetry Podcast’s beginnings were not promising. When listening to extracts of poetry, the sound quality of the recording is essential. Bad audio can distract during any type of podcast episode, but it becomes detrimental to hearing a piece of writing that relies on the musicality of its language to convey meaning. The rhythm of the words is essential when we cannot see the textual structure as it appears on paper. For this reason, I almost cast aside the show after listening to its first episode (this was taking into account the fact that it featured the excellent poet Ocean Vuong, illustrating just how bad the sound actually was).

However, after sorting out these teething problems, the potential of the Faber Poetry Podcast is finally presenting itself. Its structure combines traditional interviews with inventive “poetry postcards,” which take the form of recordings delivered by eminent poets from across the world. This is something which British arts podcasting specializes in, making use of colonial connections exploring international themes in a way that doesn’t center around identity, but takes a wider, more cosmopolitan angle. It is not necessarily a better lens, but it is an essential one, adding to the conversation on increasingly globalized recognition and democratization of all artforms, including poetry. The Faber Poetry Podcast has great potential; it is youthful and vibrant, and the quality of its guests, due to the influence of its parent publishing house, is undeniable. 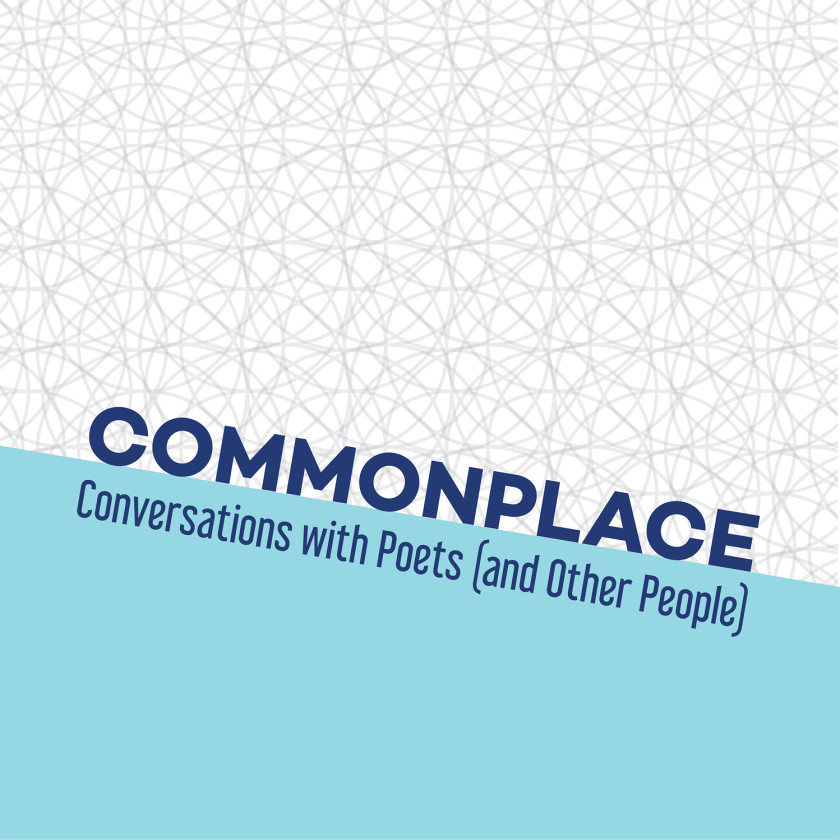 4. Commonplace: Conversations with Poets (and Other People)

Commonplace aims to illuminate poetic craft through the quotidian. Hosted by Rachel Zucker, the author of ten books of poetry and memoir, the podcast dives into the overlooked minutiae of the everyday to find the roots of the extraordinary. The show interviews the likes of Sheila Heti, Morgan Parker, and John Keene in a conversational style that is meandering and unrushed. Exploration of the everyday is a tactic that has become standard in podcasting genres such as business and health. We long for the details of someone’s morning routine to uncover the building blocks of success. Where this practice is slightly less examined, at least in podcasting, is in the creative arts. From discussing her guests’ daily commutes to their most used recipes, Zucker’s interviews amble through the stuff of life, weaving a poet’s work into the context of what we consider purely conventional. Commonplace explores poetry in a way that feels both contemporary and diverse. 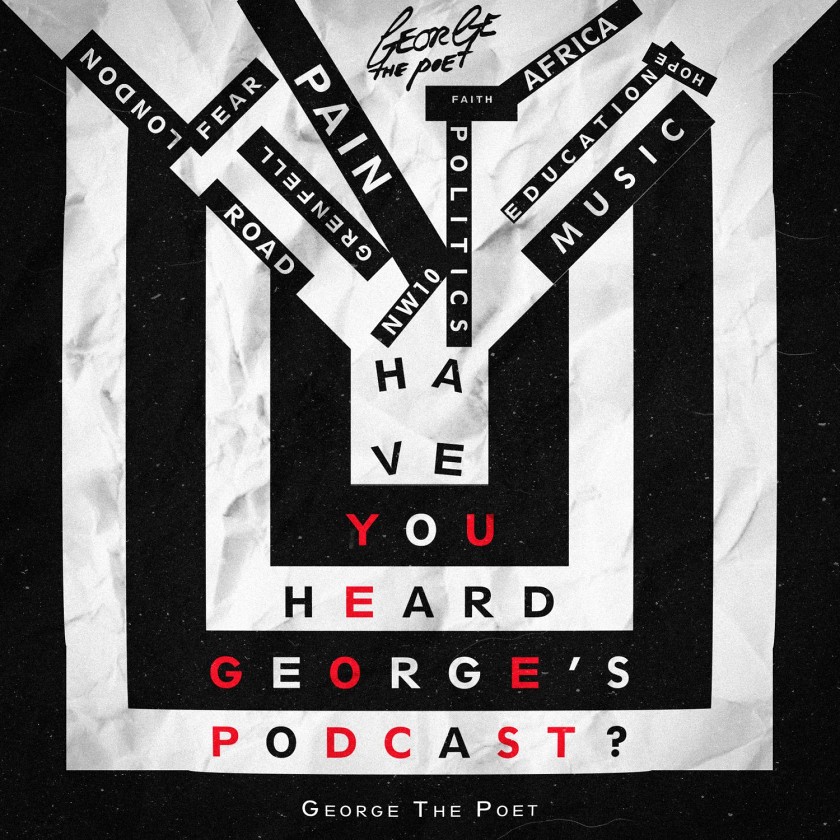 5. Have You Heard George’s Podcast?

Have You Heard George’s Podcast? is the brainchild of spoken word artist George the Poet, aka George Mpanga. Having taken home the titles of “Best Podcast” and “Smartest Podcast” at this year’s British Podcast Awards, the show has become difficult to introduce without resorting to hyperbole. Despite occasional hiccups, Have You Heard George’s Podcast? manages to surprise listeners with its evocative story, treading the line between current affairs and fiction, music and spoken word. Mpanga’s alias is as provocative as his words are melodic, using the unifying potential of poetry to highlight divisions in the British political system. His lens does not shy from issues of racial oppression: by coalescing poetics and Grime music, Mpanga illustrates that racism is as ubiquitous for the children in his locality as the rap songs coming out of their phones. Mpanga uncovers the artistry behind this music, rejecting the mainstream narratives of violence and laziness that weigh heavily on black communities. A series full of intelligence and emotion, its innovative storytelling techniques will make the listener rethink the potential of podcasting. 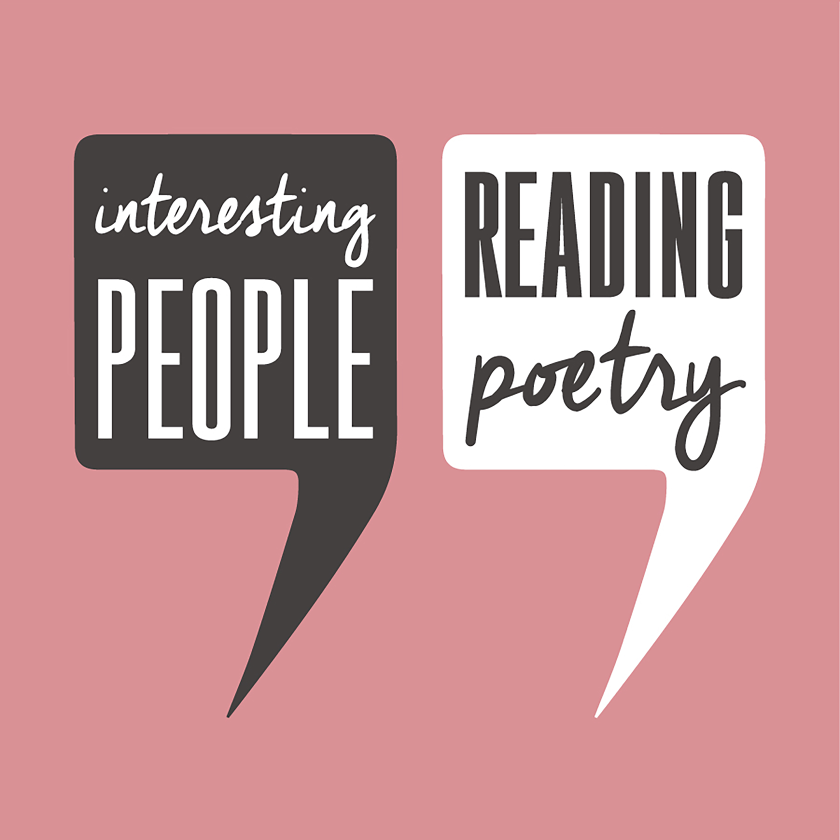 “If it ain’t pleasure, it ain’t a poem.” So begins every episode of Interesting People Reading Poetry, a podcast that takes the words of William Carlos Williams and inverts them. The show is a pleasure, and the tenderness of its treatment of poetry has the unfortunate consequence of highlighting the shortcomings of other poetry podcasts. Created by brothers Brendan and Andy Stermer, Interesting People Reading Poetry wants us to experience poetry on multiple levels of enjoyment. The show takes an individual, not famous in the conventional sense, but a force in their field, such as a composer, historian, or writer, and asks them to read whatever poem has had the largest and longest-felt effect on their life.

So far, so conventional. But where the show departs from others is in its production. Each episode has an original score composed by the show’s co-producer, Andy Stermer. Often with spoken word formats, producers can forget that the ear can hear more than just discussion. Soundscapes are essential to the experience, and the compositions heard here are eerily atmospheric, lingering in one’s ear long after an episode has concluded. As well, the thoughtfully chosen guests are a masterstroke. They read the poem as an introduction, following with a lyrical explanation of the reasons why it touched them so profoundly. By placing a second reading after this monologue, the poem takes on a second life. New meanings become attached, and new pleasures emerge. 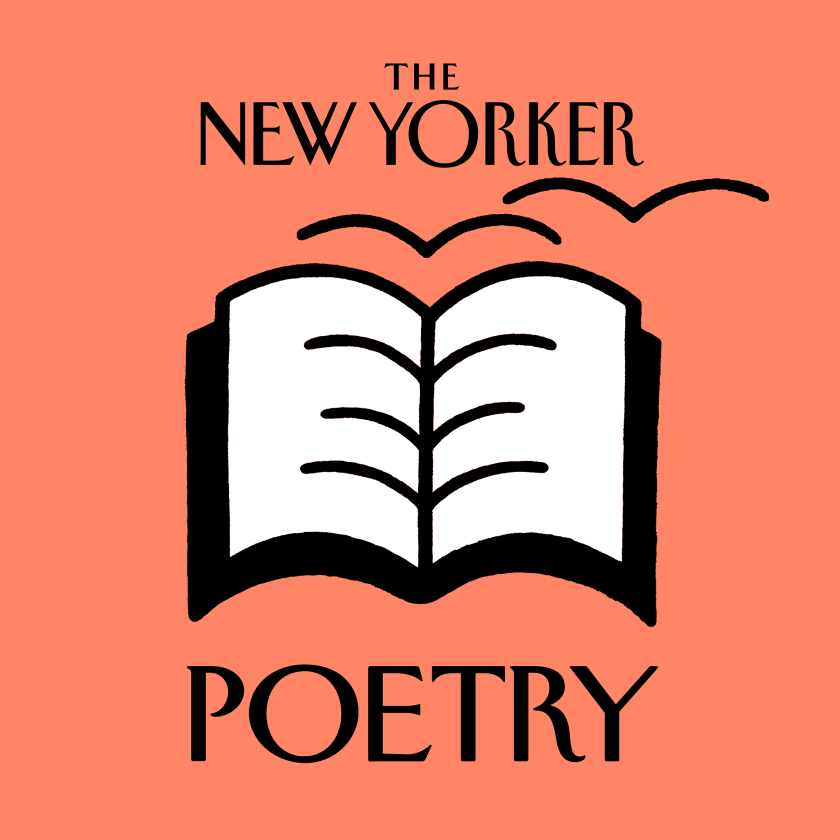 On The New Yorker’s poetry podcast, Kevin Young is joined by contemporary poets who read and then discuss a poem that they have selected from the magazine’s storied archives. It is a fascinating premise that proves more compelling than if the back catalogue was mined by a single host. Each guest brings a new lens with which to examine The New Yorker’s collection; even when a poem is repeated, the perspective provided is entirely new. In this way, the archive becomes infinite. After discussing the influence of poets like W.S. Merwin and Alice Oswald, the guest then reads a poem of their own, one that has also been published in the magazine.

Despite the diversity of its guests, the podcast maintains the distinct atmosphere of the New York City literary scene. Ultimately, the listener must buy into the legacy of the magazine as a platform of a distinct kind of poetry. To examine work published by a single venue, with its own editorial slant, will always be a limited space in which to encounter poetry. But with this in mind, the quality is undeniable. Young’s interview style effectively unites the past with the present, unifying contemporary poetics with the legacy of the art form.