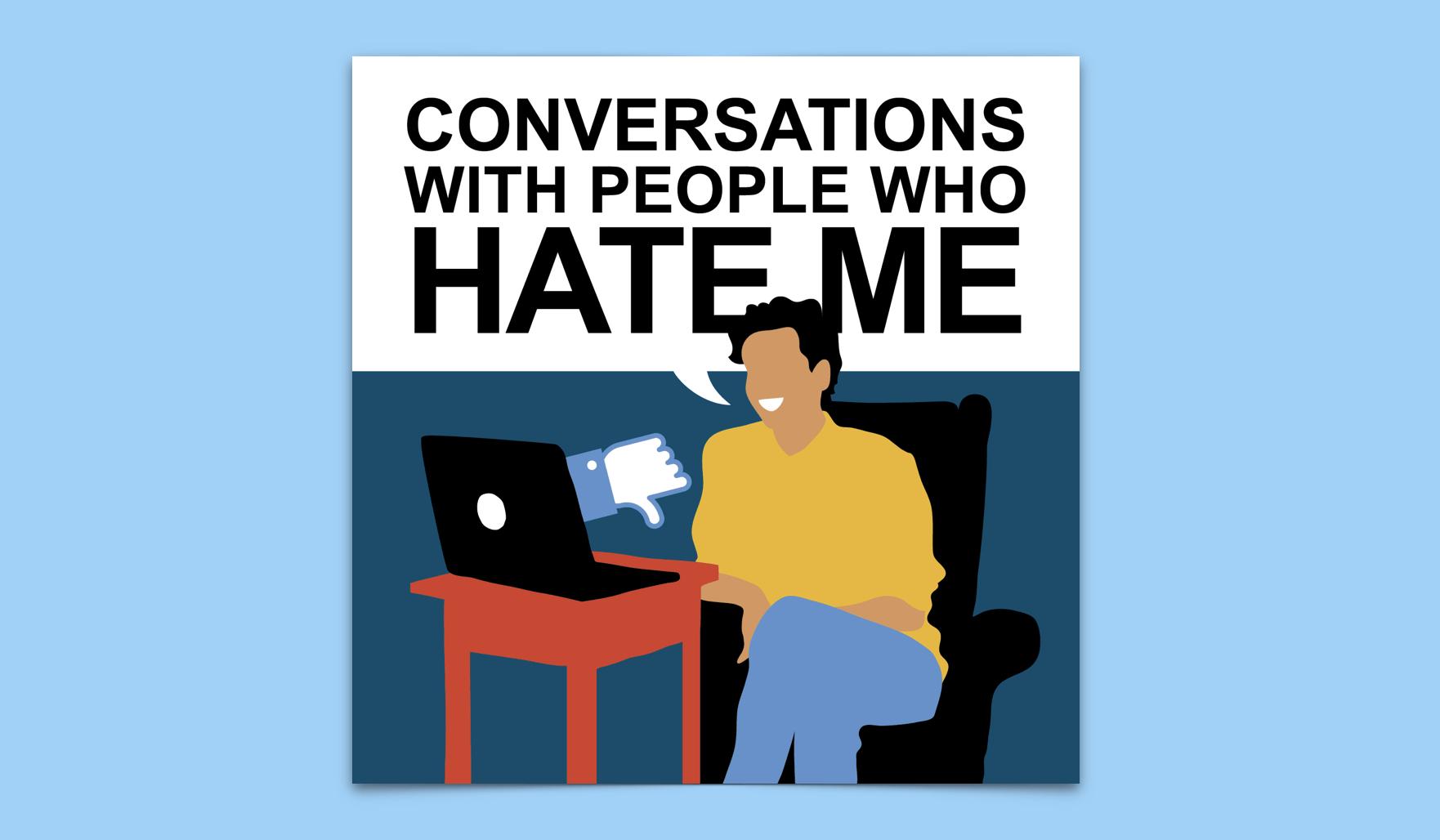 Of all the spaces online for user commentary — editorial comment sections, Facebook, Reddit, Instagram, and more — YouTube comments take advantage of the allowed anonymity most harshly. BuzzFeed once surveyed comment sections around the web and concluded that YouTube comments were the worst of all because they’re so full of hate speech and expletive gibberish. Where an article on a controversial topic like gun laws might attract heated opinions and derogatory comments, a seemingly benign YouTube video of babies playing with dogs manages to get commenters swearing at the babies, the dogs, and threatening each other.

That’s why a podcast about confronting hateful YouTube commenters is so engaging. Even if it’s not quite accountability, it’s heartening to hear anonymous detractors explain themselves to the subject of their vituperation.

On Conversations with People Who Hate Me, host Dylan Marron talks to people who left especially nasty comments on his videos. Marron is known for making videos that approach social justice issues with abrupt directness. On “Sitting in Bathrooms With Trans People” Marron discusses trans rights in the exact spot they’re being infringed upon, and on “Shutting Down Bullshit” he debunks specious arguments about drug legalization, racial profiling, and even the Holocaust (with a Holocaust survivor as his guest). But Marron’s most criticized work is his “Unboxing” video series, where instead of unboxing the newest iPhone or sneakers, he cheekily “unboxes” concepts like police brutality, liberal elitism, and rape culture. Each episode of Conversations deals with a different commenter from his “Unboxing” videos.

The “Unboxing” videos receive hostile comments from Marron’s supporters and detractors alike. People who agree with Marron’s take on the term “identity politics” — that the straight white majority uses it to belittle minorities while hypocritically practicing their own version of it — call his satirical approach ignorant and stupid. People who disagree with Marron’s videos consider them “smug condescension that only speak to people who already agree with him.” Then there’s those viewers who simply hate Marron for being gay, liberal, and outspoken, and they chime in with exclusively personal attacks: “You are a moron…plus, being gay is a sin.”

Marron invites each of these types of commenters onto his podcast to ask them about their comments and tries to understand why they wrote them. Which isn’t to say Marron necessarily ends up understanding his guests, and he definitely doesn’t change their minds. But he’s explicit about his goal: to pinpoint where he and his guests disagree and see if they can still have productive conversations.

The premise is humble and arguably not worth creating a show around. But hearing Marron cheerfully and carefully navigate discussions with people who openly bash him has a certain thrill. These are the confrontations the internet inherently allows for and prevents at the same time, and finally someone’s making them happen.

If Conversations can be seen as a kind of test study for making online commenters reckon with their words, it’s reassuring to know that Marron’s guests tend to follow a single arc. They all begin by apologizing for and qualifying their comments. “I was in a bad mood when I wrote that” and “I didn’t think you would actually read it” are the guests’ most common opening lines. They then go on to reaffirm their stance, and when Marron identifies what is most offensive and often incorrect about their beliefs (that for instance, homosexuality is a choice, news media underreport on white crime, and most Native Americans are rich casino owners) a tense silence arises. At this point, it feels like the guests might repent and change their minds. But they don’t, and that’s OK.

The kind of person who would write “You are a piece of shit. Good thing nobody watches your shit,” and then agrees to go on a podcast to defend that comment is not someone who’s going to flip under pressure. Rarely uplifting but often inspiring, the show is a reminder that despite how efficiently we can use the internet to mark fierce divisions, we can leave our digital personas behind and talk through our differences amicably when we want to.

A debate show centered around YouTube comments could easily devolve into superficial nitpicking. On its face, the premise isn’t much more complicated than the kind of YouTube videos in which people narrate their reactions to past comments. The idea that Marron’s guests actually hate him is also somewhat contrived. At the end of every episode he asks his guests if they hate him and every time they say no. But because Marron digs beyond the surface level obscenities to genuinely learn something about his guests, he makes the conversations worthwhile.

Aside from his own edification, Marron’s goal in broadcasting his conversations is to provide an alternative example of how we can treat one another online. Anonymous usernames and uncrossed distances can draw out the worst in us. Comment sections rarely host productive dialogues, but that doesn’t mean they can’t be a meeting place for ideologically opposed individuals to connect with each other and start talking. If we want those discussions, we just have to be willing to push through the name-calling, peak out from our anonymous masks, and do as Marron says at the end of every episode: “Remember, there’s a human on the other side of the screen.”

Note: In the newest episodes of Conversations, Marron shares the microphone and invites guests onto the show to confront their own online haters.