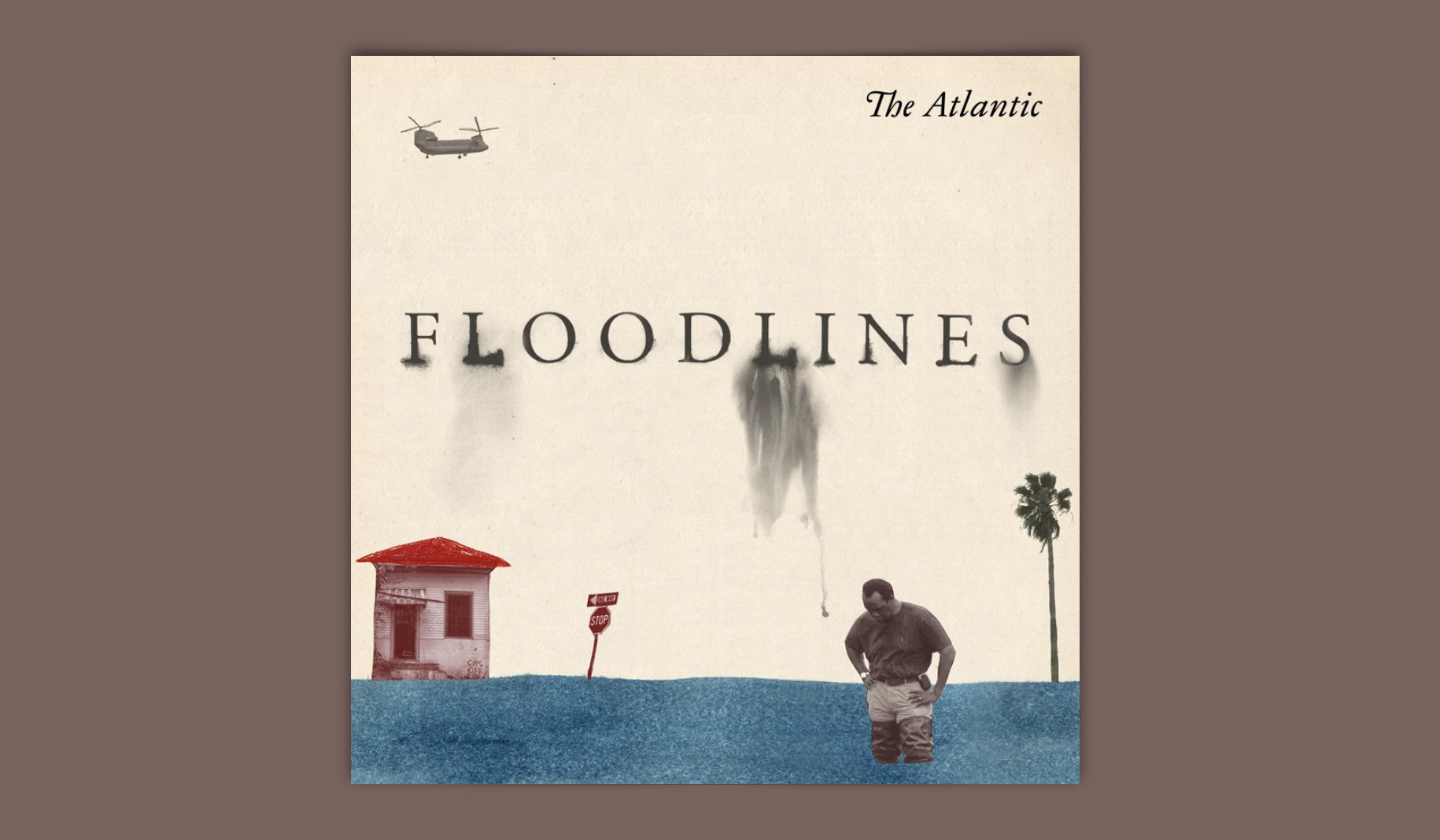 Floodlines, a podcast from The Atlantic about Hurricane Katrina, begins by introducing us to Le-Ann Williams. Williams lived in New Orleans’ Sixth Ward and was 14 when Katrina hit. One day, she was attending a competitive high school, ticking off items on her path-to-college checklist, and the next, she was walking with her family to the Superdome, wading through waters where dead rats bobbed on the surface. Floodlines interweaves the voices of survivors like Williams into its main narrative: a concise yet thorough history of Katrina, which examines the human errors that made a manageable Category 3 storm so needlessly brutal.

The show is hosted by Vann R. Newkirk II, an Atlantic staff writer who covers U.S. politics and healthcare policy. Newkirk and his team worked on Floodlines for a year before it came out this March. Unfortunately for everyone, there has never been a better time to listen to a podcast about Katrina, amid the controversy surrounding the federal response to the coronavirus pandemic. Across its eight episodes, Floodlines offers a comprehensive look at the lessons to be learned from the government’s mishandling of another natural disaster.

The federal government’s Katrina fumble was a major reason why, in 2008, voters put a Democrat in the White House. Reports of Secretary of State Condoleezza Rice shopping for designer shoes while Katrina raged went viral. So did flippant emails written by FEMA director Michael Brown. On the morning of the storm, he wrote to FEMA’s deputy director of public affairs: “Can I quit now? Can I come home?” (It didn’t help that Brown, who entered the agency with virtually no disaster response experience, had worked for a decade as Commissioner of the International Arabian Horse Association.) These details aren’t new, but Floodlines provides a good overview of the incompetence. It focuses on the lack of communication between the city, state and federal governments and explains why levees built by the Army Corps of Engineers failed.

But Floodlines stands out most when it reminds listeners of stories that didn’t receive as much national coverage. According to a ProPublica investigation, for example, a police commander reportedly authorized his officers to shoot looters. In the week after Katrina, police shot at least eleven people. Included in these numbers were the casualties of the Danziger Bridge incident. On September 4, 2005, police received a tip that an officer had been shot down on the Danziger Bridge. This turned out to be entirely false; the only people on the bridge were unarmed civilians. When the officers arrived (in plain clothes), they started firing with AK-47s. Seventeen-year old James Brissette and 40-year-old Ronald Madison were killed. Other victims were Jose Holmes, who now uses a colostomy bag, and Susan Bartholomew, who had her right arm blown off. (In 2016, four NOPD officers were sentenced to prison for terms of 7 to 12 years for the shooting. A fifth officer got three years for helping his colleagues cover up the incident.)

Still, there are flashes of beauty in the podcast, when we hear New Orleanians helping one another. There’s a nurse, Alice Craft-Kearney, who briefly opened a clinic to help low-income black people cope with PSTD from Katrina. There’s Sandy Rosenthal, a 48-year-old woman with no experience in politics, who made it her mission to show that the Army Corps of Engineers was lying when it said that their levees had been up to snuff. She started a non-profit research organization called levees.org, which found evidence that a mishandled Army Corps test on the levees was primarily to blame for the levee breaches. Later, the Corps of Engineers officially agreed with her organization’s findings.

One of the most revealing moments in the podcast is when Newkirk sits down with Michael Brown, the FEMA director/Arabian horse aficionado. In the interview, Brown admits to making mistakes but never outright apologizes for his leadership of FEMA. At one point, Newkirk tells Brown about Le-Ann Williams. She never got the college experience she had envisioned, instead having to work two jobs and raise her daughter as she attended community college. Katrina displaced her family and uprooted her life. After Katrina, Williams said her drive – “a bright light,” as she described it –“just dimmed and dimmed.”

Newkirk asks Brown to record a message speaking directly to Williams. What do you say to someone like her? “You tell Le-Ann, I’m sorry,” he replies. But he also tells Lee-Ann that she can’t rely on the government to arrive as soon as it happens, “and they may not be there for a day,” he adds. “Know that somebody’s not going to come. The shining knight in armor is not going to come and rescue her when that fear sets in.”