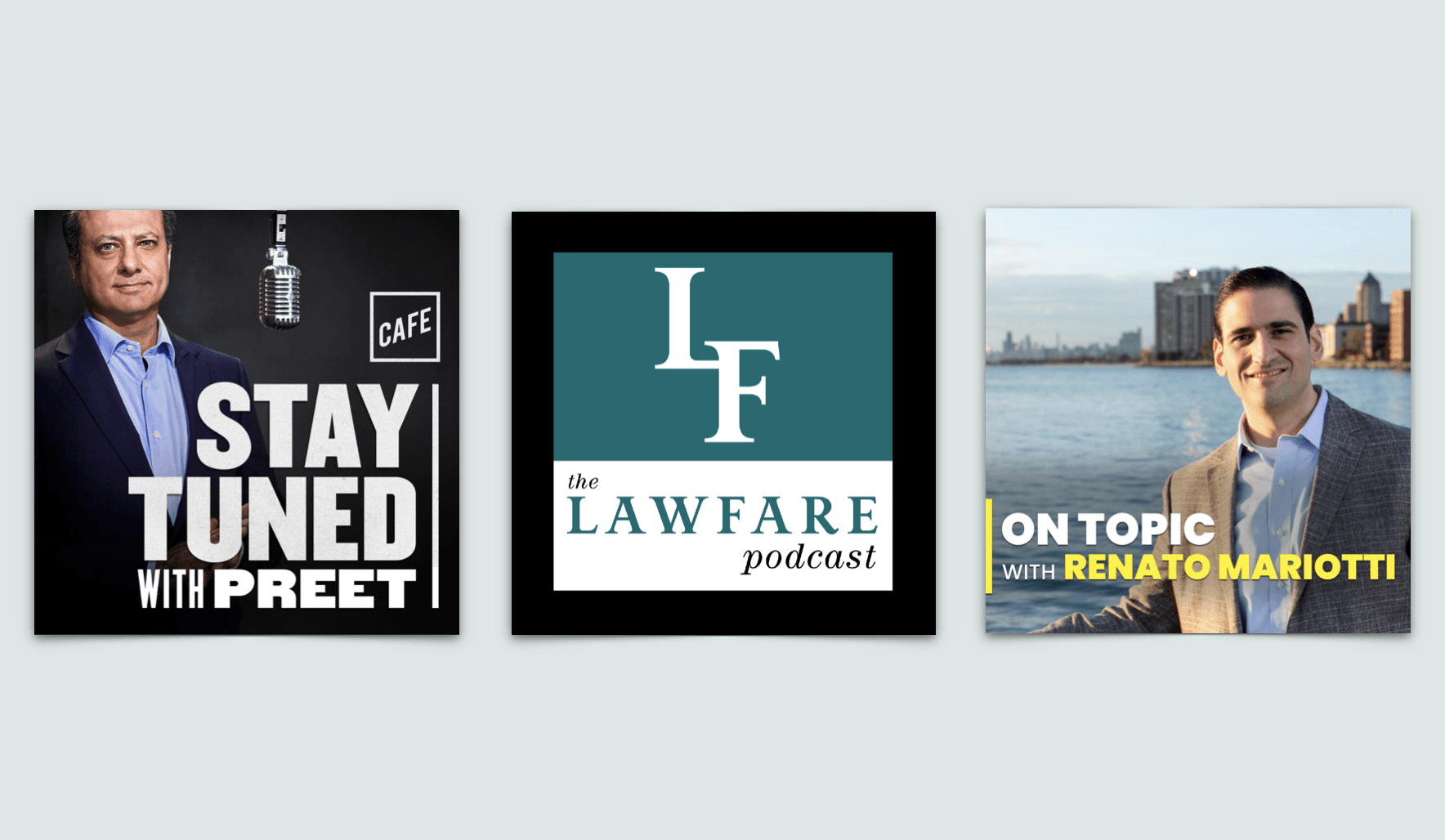 Shortly after Trump’s inauguration, I created a Twitter account to follow lawyers. I was sick of breathless Russia punditry, especially from non-experts who insinuated (through wiggled eyebrows and little evidence) that the President would soon be indicted and impeached. The lawyers I found on Twitter were different. They had expertise relevant to the Russia investigation (careers in national security, as federal prosecutors, and in the Department of Justice), and I found their commentary both rich and staid. While they all fiercely opposed Trump, they seemed professionally immune to fevered speculation, unwilling to get ahead of the facts for the sake of a comforting story. So I followed them, hoping that they would illuminate byzantine corners of the law while giving a sober appraisal of both the Trump presidency and its opponents. I haven’t been disappointed.

Since the start of the Mueller probe, two of these lawyers—Preet Bharara and Renato Mariotti—have launched podcasts. And Benjamin Wittes (who is a scholar of law, not a lawyer) has found a wider audience for the Lawfare Podcast, an outgrowth of his influential national security blog. These podcasts mix provocative interviews, measured punditry, and technical explanations of judicial procedures and norms. From them, I’ve gained an education in law and government, as well as an appreciation for those who separate fact from rhetoric and are clear about what they don’t know. I should add that these podcasts have also exposed me to coherent and thoughtful conservatives, mostly opponents of the President, whose insights I wouldn’t have otherwise heard.

No human being, no matter their politics, will always agree with the hosts and guests of these podcasts. I think that makes their broad consensus even more troubling: lawyers of varied political stripes agree that the threat that the Trump administration poses to the country is more profound and far-reaching than I previously understood. The government lawyers that appear on these podcasts are at the front lines of the President’s assault on the law, and while I came for their legally-inflected breaking news analysis, I stayed for the broader story they tell of the perilous erosion of judicial and governmental norms.

In March of 2017, President Trump fired all Obama-appointed U.S. Attorneys. Among them was Preet Bharara, the U.S. Attorney for the Southern District of New York. Unemployed but armed with a robust Twitter following, Bharara transitioned to podcasting, launching the insightful and far-ranging interview podcast Stay Tuned with Preet.

On a typical episode, Bharara begins by answering questions from listeners, whose queries are mostly legal: How do recusal and impeachment work for Supreme Court Justices? Does the Justice Department truly prohibit Mueller from public action before an election? Bharara is accessible yet nuanced in his responses, not offering false hope to Trump’s opponents while taking strong stands against what he sees as overreach and corruption. He is clearly liberal and vocally anti-Trump, but his politics tend to take a backseat to his curiosity, and his legal analysis is wedded to facts rather than yearning. This makes him a credible analyst, and it amplifies his moral authority in the moments when his opinions break through.

The guests on Stay Tuned are typically—but not always—involved in politics. These include never-Trump Republicans (Senator Jeff Flake and former GOP strategist Steve Schmidt), prolific liberals (Congressman Adam Schiff and Senator Sheldon Whitehouse), and journalists (Ronan Farrow and Maggie Haberman). Bharara is a knowledgeable and adept interviewer who manages to draw out guests’ expertise without leaving lay audiences behind.

Essential Episode: “The Death of Sergei Magnitsky (with Bill Browder)”

On Topic with Renato Mariotti

On Topic, the newest podcast of the three, is also the most overtly political. As a former federal prosecutor (and as a human being), Renato Mariotti is outraged by the Trump administration, and his show discusses federal politics from a liberal legal perspective.

Of these three podcast hosts, Mariotti might be the best Twitter follow due to his granular news analysis threads. (His Twitter is always my first stop when Mueller news breaks.) However, his podcast hasn’t quite hit its stride. Mariotti’s lucid analysis is often overpowered by co-host Patti Vasquez’s eloquent and impassioned (but not legally informative) contributions. And while I wish the show spent more time on rigorous legal discussion and less on partisan punditry, On Topic is still edifying. The episode about family separations, for instance, is both galvanizing and educational in its explanation of the legal obstacles facing families detained at the border.

This podcast is barely more than ten episodes old, and I’m optimistic about its evolution. Mariotti is a conscientious and informed commentator who is unabashed about his political and moral beliefs—a combination that America seems to crave.

Benjamin Wittes, a longtime legal reporter and fellow at the Brookings Institution, is a controversial figure among liberals and conservatives alike. He’s hawkish on national security, supportive of executive power, a personal friend of former FBI director James Comey, and a leading voice of the intelligence community’s opposition to President Trump. His podcast—on which he either interviews guests about their areas of national security expertise, or assembles a panel to analyze the news—is the most niche and wonkish of the three.

This is in Lawfare’s DNA. Until President Trump began his daily assault on the law and Wittes took a strong stand against him, Lawfare served a narrow audience of national security and intelligence specialists. Despite this, the Lawfare Podcast is generally accessible to the swelling ranks of lay people curious about the abuses of the Trump administration. Its periodic special episodes analyzing breaking developments in the Russia probe are particularly illuminating, as they parse mystifying legal filings and bring insight into the opaque behavior of Mueller’s prosecutors and targets alike. The regular episodes—which address topics from FISA court to cybersecurity to the Constitutional technicalities of impeachment—are captivating plunges into security, intelligence, and legal issues that I can’t believe I’d never cared to understand.

Before listening to Lawfare, I associated intelligence and national security people with the abuses of COINTELPRO, reckless meddling in developing nations, and that photograph of NSA headquarters, glassy and blank, that is used in every news story about electronic surveillance. Lawfare hasn’t entirely changed my mind, but there’s a reason that New York magazine called Wittes “the man who made liberals newly enamored of the Deep State.”