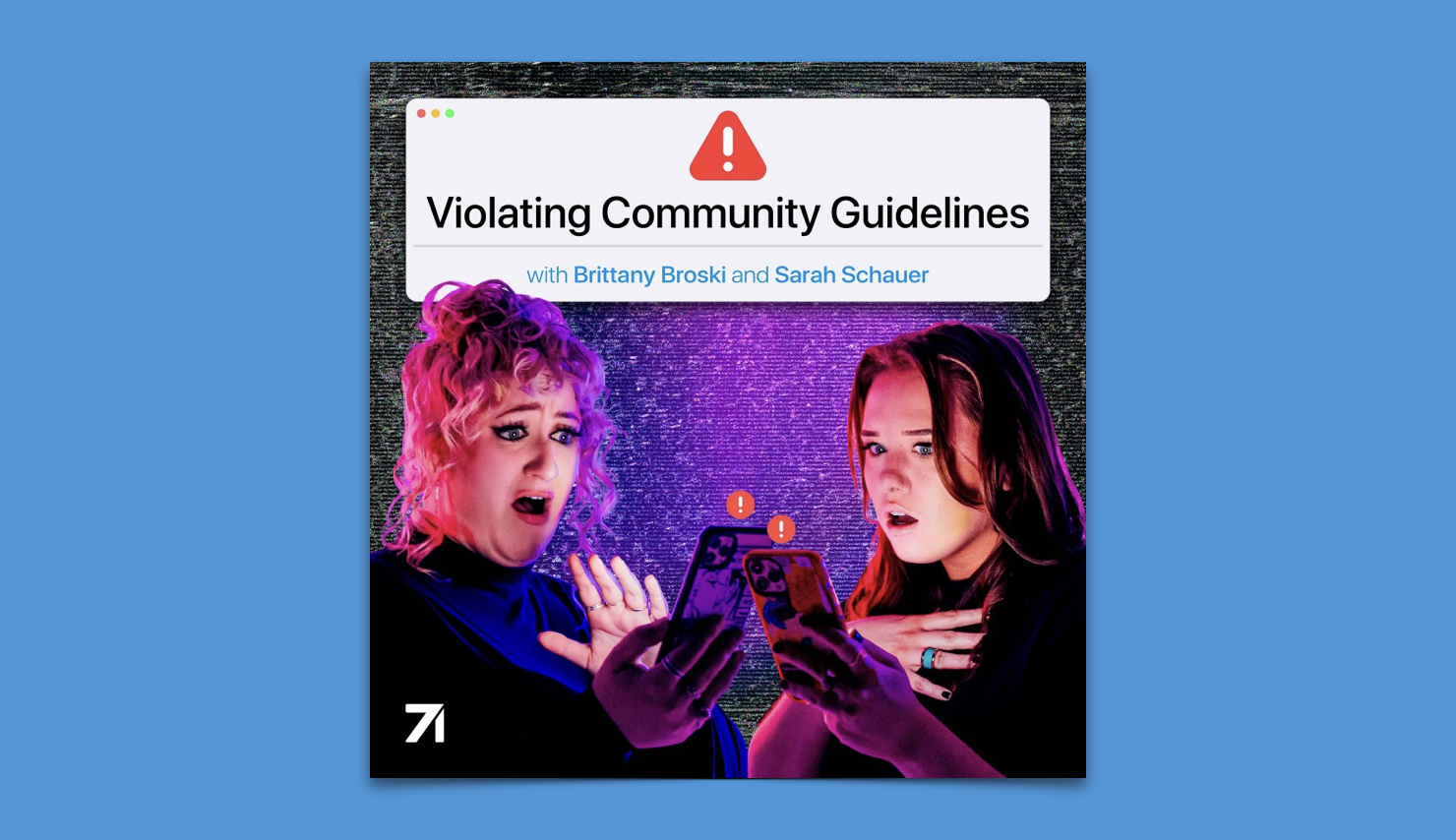 Few are more knowledgeable on all things Internet than Sarah Schauer, a hit web personality since the days of Vine, and Brittany Broski, a TikTok star who rose to online fame as the “Kombucha Girl” meme. After cementing themselves as comedians on YouTube, TikTok, Twitter, and Instagram, the duo are now taking on the world of podcasting in their new Internet-centric show Violating Community Guidelines.

Each episode explores some of the most unusual corners of the web, from “A.I. Influencers” and “ASMR” to “Facebook Marketplace” and “Furries.” While you might have been lucky enough to have avoided some of these topics in your own life, that won’t stop you from enjoying the episodes. Broski and Schauer make each subject extremely accessible, providing a brief description and history before delving into it with refreshingly open minds. Their willingness to learn allows them to embrace every community, undoubtedly shattering whatever preconceived notions you might hold. That is, until they inevitably reach the outrageous edge of every topic, leaving you cackling as they rip apart the most horrendously outlandish posts from LinkedIn influencers. Their comedic style is a brilliant blend of nostalgia, topical references, and improvisational storytelling.

However, Broski and Schauer aren’t afraid to incriminate themselves, either. Their storytelling involves relatable moments where they make fun of their own personal experiences, and it is oddly comforting to hear. It’s like listening in on a conversation with your funniest friends while they recount that time in college when they wrote a fanfiction about Cole Sprouse as a war veteran.

The best moments of the podcast are when the two rewind to the days of Internet past. As they talk about previous trends and abandoned forums, a potent feeling of nostalgia and embarrassment washes over you. Their episode “Creepypasta” is essentially an hour-long trip down memory lane, where the two talk about the highs and lows of online culture during the 2010s. Though not every episode is a dive into the past, each episode has at least a reminder of these former fads, sparking a forgotten memory that will make you reminisce on those universal experiences every online user went through at the time.

While always hilarious, what’s truly fascinating about the podcast is the frequent discussion of ethics. Should A.I. Influencers be able to market real clothes? Should minors make ASMR videos? Does creepypasta influence real acts of violence? No matter the subject matter, each episode naturally flows towards the question of “how far is too far?” But Broski and Schauer make sure to draw a clear line with the listener. In their episode on conspiracy theories, the two went in knowing some theories are simply too harmful to even mention. However, it is this awareness and setting of boundaries that allows them the freedom to explore the gray area of right and wrong, giving a much-needed depth and nuance to the conversation.

The breadth of topics Schauer and Broski pick add an extra layer of excitement to the podcast. Every time a new episode airs, it’s a coin toss whether or not you’re going to be in on the conversation or learning about something new and weird. Wherever Violating Community Guidelines takes you, the pair’s infectious attitude is sure to inspire a fascinating discussion and countless laughs.

Ryan Lark is a freelance podcast and music critic living in Lexington, Kentucky. He can be reached on Twitter (@ry_lark) and by email at [email protected].