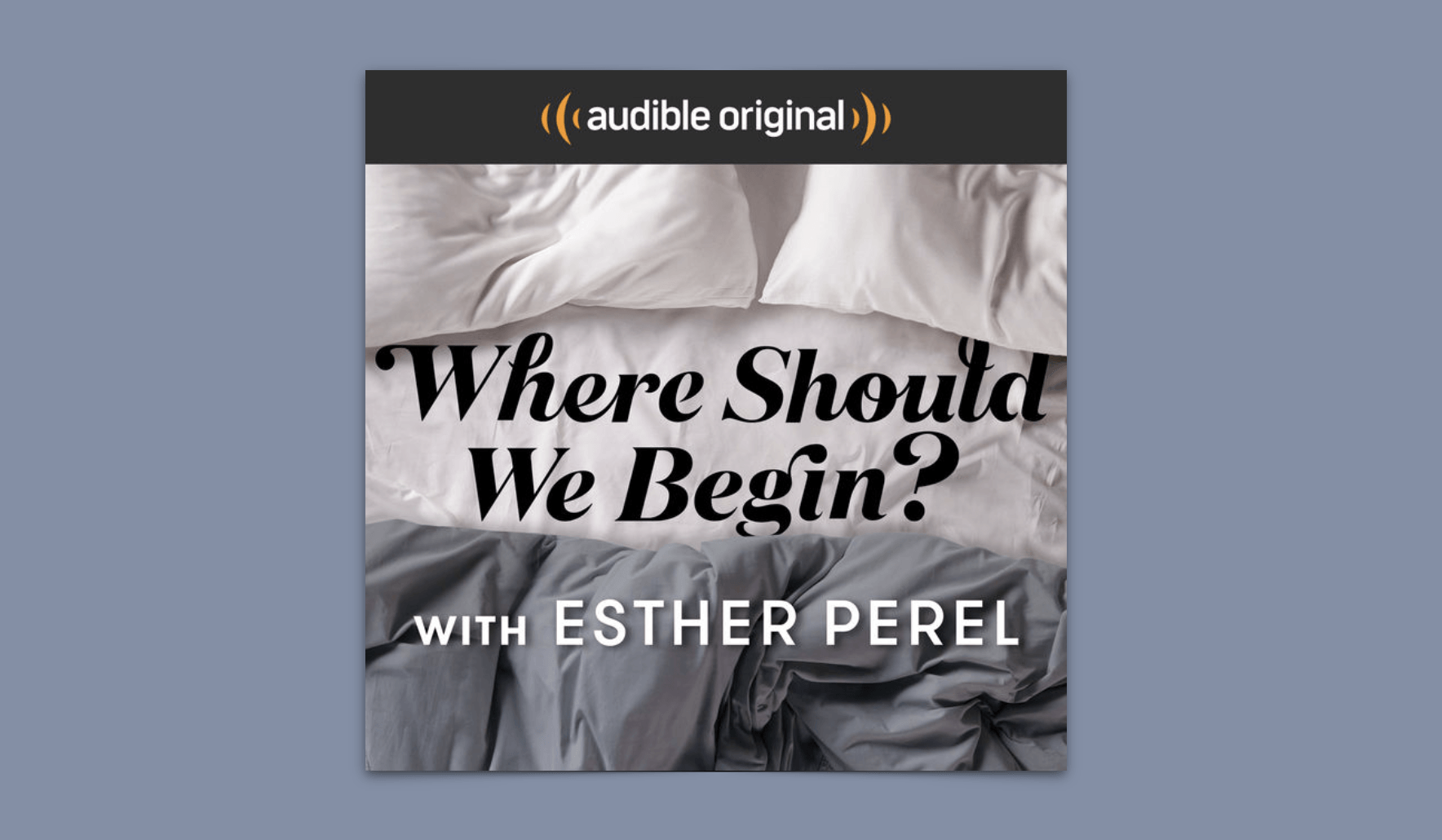 Where Should We Begin? is a podcast of listening to others listen to themselves. In the show, the New York-based psychotherapist Esther Perel sits with an anonymous couple. The couple’s problems vary—infidelity, imbalanced affection, navigating personal histories—but the format is consistent: the couples speak, and Perel digs. Or, rather, she guides, prods, questions, and knocks the couple out of their pattern of communication.

The podcast attempts the well-trod task of publicizing the intimate, but with an important distinction: the presence of professional help. In a run-of-the-mill comedy podcast where guests discuss their deepest fears, intimacy comes from sharing (or, rather, over-sharing). The guest has already reached a level of personal insight and chooses to let listeners in to their private reality. In Where Should We Begin?, the audience hears the emotional revelations in real time. There is so little distance that these truths arrive clunky and hard; the couples haven’t had the time to package their feelings into a communicable story. Instead, what comes out are the quivers, the hesitations, the intonations as a voice crosses the threshold from intellectual observation to emotional present. And there, alongside these couples, is Perel, charting a map of intimacy through the deepest realities at play in a couple’s dynamic.

This show, despite resting its premise on the struggles of a given couple, is fundamentally a chance for Perel to showcase her expertise. She has a history beyond a psychotherapy practice; she has written popular books and given talks on marital strife, the rationale behind infidelity, and how to maintain erotic desire in a lifelong partnership. This experience comes across during the recorded sessions; Perel’s technique in the podcast is both lighthearted and direct. She speaks with the same level of engagement and clarity when she teases a patient or describes their visceral need to be held. This creates a duality of emotional gratification in the show: hearing Perel uncover the couples’ lives and hearing the couples connect to each other in new ways. We aren’t just invested in the couple’s progress, but in how Perel guides them there.

Perel is an expert in infidelity or, as she calls it, losing emotional security. This desire to display her expertise works against her, though: by offering up a couple’s therapeutic experience to millions of anonymous listeners, Perel unwittingly recreates that very same loss of security. This is a bit unfair to the thoughtfulness and help Perel offers in her practice, but if every relationship morphs under a new gaze, how do we measure the effects on a relationship under the gaze of an entire podcast audience? The podcast form inevitably privileges the experience of the listener over the couple’s secure emotional world. The show specifies that the couple consents to the recording and identifying characteristics are removed for the sake of privacy. Those identifiers are presumably names, occupations, and locations, though, which implies a person’s most public characteristics require the most privacy. But to know a person means seeing and holding space for their deepest fears, insecurities, and needs, and these are the exact elements Where Should We Begin? puts on display.

The presence of this external gaze is most apparent when Perel speaks directly to the audience during a mid-episode interlude, shortening the therapeutic process into a digestible narrative. A cello backs her words as her voice moves from addressing the couple to addressing the listener. She’s describing the therapy session, but the focus becomes whether the listener can catch up. It’s no longer about a moment of breakthrough for the couple. Instead, it’s about bringing the listener up to speed to ensure the moment can offer a mirror into their own lives. As much as a podcast is about the subject, it’s always even more about the people who listen.

Podcasts create the feeling of company without the company. They also rob listeners of silence. Sirena Bergman recently wrote about the neural effects of constantly listening to podcasts, and a theme among the experts she spoke to is how the brain requires time to process any information it takes in. Being alone with one’s thoughts is what allows all forms of emotions and sensations to integrate, and incessant podcast listening—queuing up episodes to play one after another—can deny the body this crucial experience. Where Should We Begin? isn’t a normal podcast, though. It’s not a deluge of educational information or a gripping true crime story. It’s a stage for couples to listen to themselves. Through the process, they create new emotional languages and insights that, when listeners apply as a mirror to their own lives, create the value of the show. But the demands of this value require eventually turning it off.

But before turning it off, you might hear the story that hints at the emotional map that has been missing in your own life. You’ll hear the story of a couple whose sex life relies on an alter ego, a couple whose infidelity brings up long-neglected histories of trauma, a lesbian couple navigating who holds the maternal care in the home. You’ll hear Perel note, with one couple in particular, how humans fundamentally live in two different camps: those who believe someone will always be out there to catch them when they fall, and those who don’t. Insights like this demonstrate the generosity at the core of Perel’s show, and the practice she has developed over decades. She is not there to scold or belittle or invalidate; no one on her show is a villain and no one a saint (after all, much of her career is based on the idea that infidelity isn’t inherently bad). Everyone is a melange of hidden identities, desires, hurts, and fears, and she’s there to catch them as they fall from a comfortable narrative into an emotional truth.