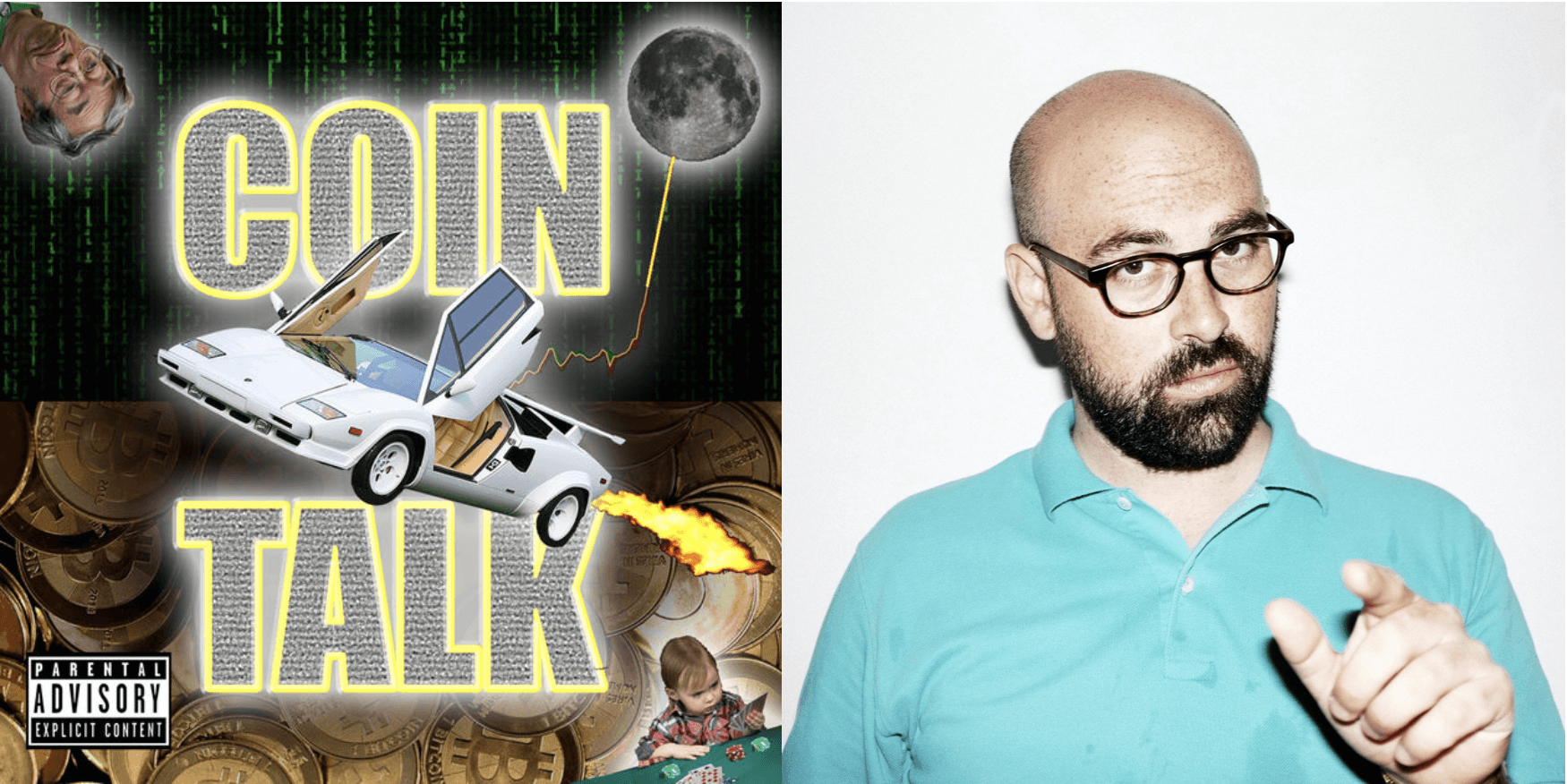 Aaron Lammer is the co-founder of Longform, a site that showcases the web’s best non-fiction, and a co-host of its exceptional weekly podcast. He’s also the host of Stoner, a show about the intersection of weed and creativity. Lammer’s newest podcast, Coin Talk, which he hosts alongside journalist and Vice News correspondent Jay Caspian Kang, dives into the chaotic and fascinating world of cryptocurrencies. (To add to this impressive resume, he is also a songwriter in Francis and the Lights.) We sat down with Lammer to discuss how he came to host three podcasts and asked his advice for those hoping to make shows of their own.

Was the Longform Podcast your first foray into podcasting?

Very much so, yes. It was also one of my first forays as a listener. I was listening to some podcasts at that point, but I’d never been a podcast mega-consumer. At one point, though, when I was about 22 and trying to go to the gym a lot, I downloaded a torrent of every This American Life to date, which was already quite a lot of episodes. I listened through the entire thing. I believe that may have been on an iPod Shuffle. That doesn’t really make sense, though, since they had to play in order. I think it was just a very early iPod [laughs].

In any case, that’s impressive. How long into Longform was it when you started thinking about making your own podcast?

Honestly, it was kind of a weird serendipity. I had been done running the Longform app, which was taking up a lot of my life. So I started doing Stoner fairly soon after we shut the app down. The app had really been my big side project, and I like doing project-based things like that. I thought I could do Stoner in a lot of different ways. It could be a website, or maybe it could be a text interview series. But ultimately podcasting was just something I knew how to do. I knew I could do it in a finite time with finite resources. It just made sense to me.

Plus with Stoner itself, if I had tried to make a website, there’s High Times, Snoop Dogg’s got this site Merry Jane, and there’s all these ones at alt-weeklies in Colorado. But there wasn’t a really good podcast. Theoretically, I could have the best podcast on this topic. I mean it’s unlikely that without funding and resources I was going to make it the best, most epic experience — but podcasting has this effect of levelling the playing field, where, with the existing setup I use to make Longform, I could theoretically make the best podcast on this topic.

When do you start to find that a given topic — whether it’s weed or it’s cryptocurrencies — is ripe for a podcast?

I generally think that when it feels something is oversaturated and there’s way too many people in, well, if you feel that way and you’re in New York and on the internet all the time, you’re still pretty early. I definitely think about trying to catch things while the wave is coming up. You could say that podcasting as a whole is a wave that’s coming up. But with Stoner for example, when I told people I was doing a weed podcast, in Los Angeles they’d say, “Too late!” and in some places you’d get, “Oh, too early.” And that’s kind of the sweet spot. It’s important, too, that a topic is well-known enough that you don’t have to explain to people what it is. If I had started a crypto podcast three years ago, I think literally saying I had a crypto podcast wouldn’t even mean anything.

So whatever you’re talking about has to be far along enough that it has name recognition. I believe that when it comes to naming your podcast, too. It’s important that someone sees “Stoner” and understands that it’s a podcast about weed. That’s how I think about these things. That there’s a moment here, but there’s also a long way up, because we’re talking about doing this for a period of years. I’m thinking, “Would this topic be interesting for season two, season three?”

Is that how you think about it, in terms of seasons?

I mean, no one really understands very well: When you do a podcast, are you supposed to do it all-the-time and forever, or can you take a break? I don’t know. I think it depends on the topic. I wouldn’t ever see myself doing seasons with Coin Talk because there’s new crypto news like every 12 hours. I don’t think I could go and take two months off and still have an audience. Whereas with Stoner I’m not really that concerned with the news cycle, so I can take time to book bigger guests. I just taped an interview with Earl Blumenauer, a congressman who’s the head of the Cannabis Caucus. If I needed to put up an episode this next Tuesday, I couldn’t have gotten a congressman. That requires tons of back and forth. So with Stoner I’m learning to be a little more patient.

So while Stoner is between seasons, you’re taping for more episodes?

Yeah, I’m trying to tape it now. I won’t have the whole season done, but I’ll have enough to where I’m not scrambling every week to put a show out.

Let’s talk about your new podcast, Coin Talk. When did you first become interested in cryptocurrencies?

Not that long ago. Maybe May of last year? I was aware of it before, but that’s when I started going overboard with it.

When did you figure out Jay was into crypto?

Well, I got Jay into it. So it’s my fault that he’s into it. He was making fun of me at first, but the thing about Jay is that he gambles all the time. Plus he knows a lot of professional poker pros because he’s covered some of the biggest online players.

And he used to play poker himself.

Yeah, he’s walked both the journalism and experiential journalism angles of poker-playing. So I knew he would be susceptible to it, and he was probably hearing it from all those poker dudes who got into crypto, too. I started talking to him about crypto around September. And maybe this is unusual in podcasting, but we taped a ton of demo episodes; we taped twice a week for about three months. It was so hard to talk about at first. We weren’t particularly deep in this world, but we still really had to think, like, are we going to explain proof of work mining on this show? We would tape some episodes that were very pedantic and others that were totally incoherent, and it’s just hard. It’s like doing a podcast about math.

Do you find you’re still working through your thoughts on the podcast?

Completely. Every time we tape a podcast, I’m, like, should I cut that out? Is that even true? We’ve already gotten a lot of things totally wrong. But I believe there’s a value to—instead of making things all about, “I have the knowledge and I’m giving you the knowledge”—having it be more like, we’re on a journey together and we’re both dumb. I’ll ask the dumb questions so you don’t have to, and I’ll get the people who can answer those questions well. The challenge then is to find those people. There aren’t a ton of people who are smart, interesting, coherent and know a lot about crypto. Crypto people are not necessarily born-entertainers.

Who do you think your audience is?

I think the ideal person is someone who’s not starting from nothing. Someone who’s getting interested, doesn’t know everything, and isn’t a total extremist ideologue in any direction. Like I don’t think that person is obsessed with Bitcoin and has their life savings in it. But also, if you’re a total no-coiner skeptic who’s thinking, “This shit’s bullshit and it’s going to zero,” then you probably don’t need to listen to a podcast about it. So really someone intrigued but sensible, and also just really curious. And I think that’s where a lot of people are at.

Absolutely. Well, it’s good you guys got in when you did. A lot of people I know entered in December or January, when Bitcoin was near its peak, and it’s basically been sliding ever since.

It’s funny. The weirdest part about this show is like, what if it just keeps going down? Or what if Bitcoin goes to zero? It’s going to get really depressing. But when we were taping before the show had launched, Bitcoin went from around 4,000 to 18,000, and Jay said, “What do we have to talk about? How it went up again?” I was saying, “I think we should definitely talk about how it doubled in the last month.” But there’s also a limit to that, so our conclusion is that the best possible scenario for the show is a total roller coaster. Up and down, up and down, as extreme as possible, where everything that could happen happens — that is the best scenario.

I’m excited for the ride. OK, last question: What’s your advice for people trying to make their own podcasts?

I think relentlessness is really the main thing. It takes a long time to establish an audience and most people just want to toe-dip and see if they’re really successful and they’re not totally sure about it. The thing that Max [Linsky] has always preached to me is, yes, there are a million podcasts in the podcast store, but how many of those podcasts have produced an episode every week for at least one year? Instantly you’ve just shaved off a huge swath of the store. So, you want to be in one-out-of-a-thousand instead of one-out-of-a-million? Do your show at a high quality every week for a year, and that almost just seems like a hack.

I was going through the past episodes of Longform and realized that you’ve been doing it every week.

Yeah, we’ve never missed a week. 283 episodes in a row. So yeah, that’s my primary advice. That, plus I don’t actually think the technical stuff is that difficult. I think a lot of people think of making a podcast as a technical challenge, and really it’s more about workflow: How much time do you have in your life? How dedicated are you to doing this? After seeing just 31 people listen to your show, will you put out another episode next week, and the next week after that? That’s what it’s about.