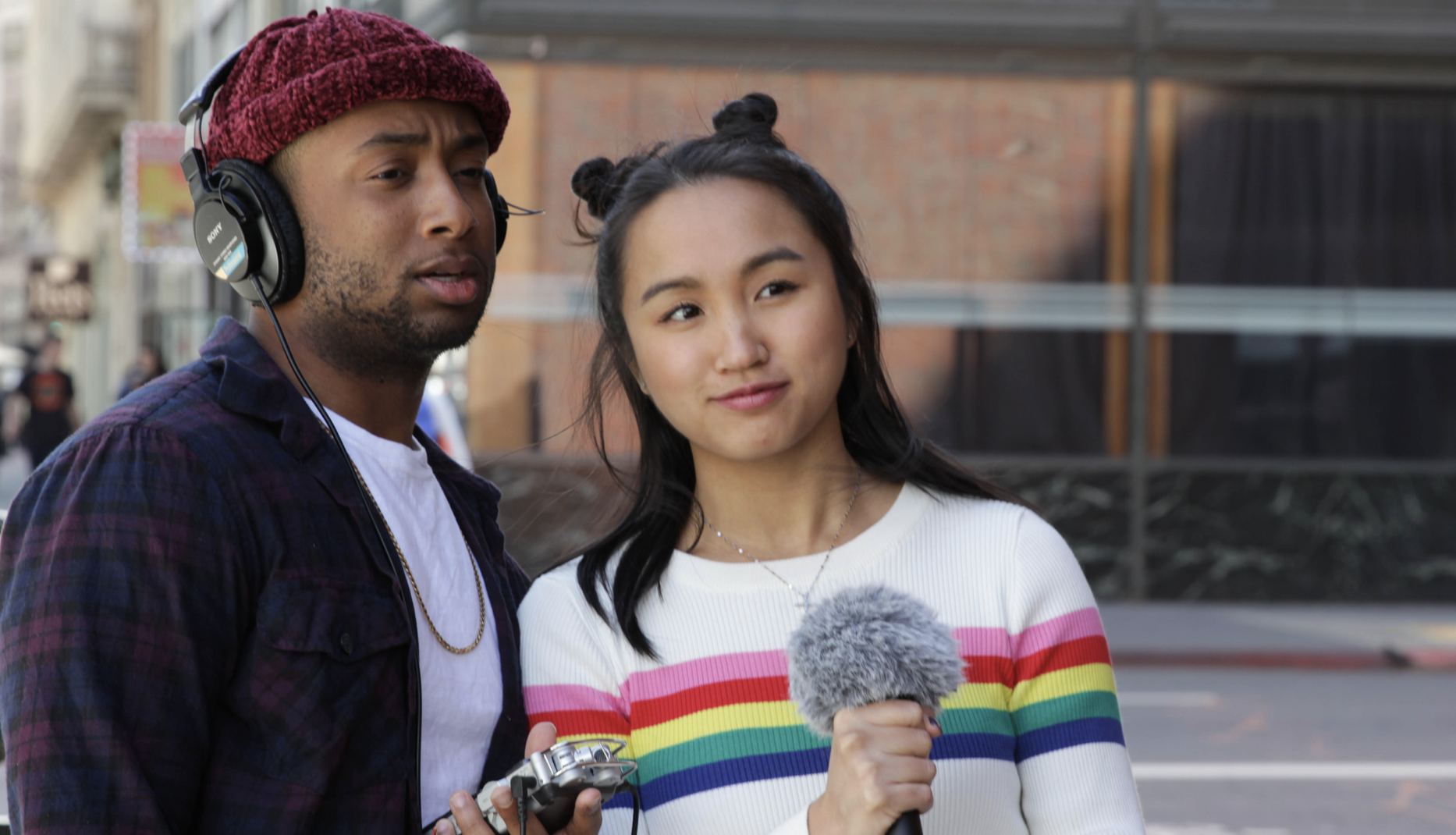 When one looks for advice, they generally seek out someone older than themselves. Wisdom comes from experience, the thinking goes, so you should talk to someone who’s literally spent more time on Earth, and who may have already dealt with whatever issue you’re facing. But one thing is for sure: being a young adult today is different than it was even twenty years ago. No longer can a summer job pay for your college tuition; nor can your parents help much with designing your Hinge profile. So, if you’re in your twenties or consider yourself young at heart, where you can reliably turn for guidance?

Enter Adult ISH, a new culture and advice podcast from Radiotopia and YR Media whose hosts, Nyge Turner, 23, and Merk Nguyen, 22, are young adults themselves. On each episode of Adult ISH, Nyge and Merk take on a new topic and offer their best tips and funniest stories. On this season’s debut, “Below the Belt ISH,” the duo explores the world of male birth control and give listeners the lowdown on how to self-administer a pelvic exam. And on “Roots ISH,” the podcast’s latest episode, Nyge and Merk touchingly reflect on their family ancestries. For Nyge, this involves recounting the time his father took him to visit a former slave plantation, and for Merk, a difficult conversation with her parents, who tell her she shouldn’t get a buzzcut as she’ll “look like a communist,” harkening back to their time in Vietnam before they fled to the United States.

So far, Nyge and Merk have kept Adult ISH fairly unpredictable, eliciting laughter and serious reflection in equal measure. In the following interview, the pair discuss how they got their start in podcasting, how they go about choosing each episode’s theme, and what lies ahead for the show.

First off, tell me a bit about yourselves. How did each of you get into radio and podcasting?

Nyge Turner: My family’s lived in Richmond, California, for three generations now — my grandpa was one of the first black people to buy a home in the area. In high school, I talked with one of my friends about how there weren’t really any podcasts done by people our age and so we started one. It was a show called Not Your Father’s Podcast, about anything from NBA legends to what essentials you need to throw a good party. We did that for about two years. The funny thing is I didn’t take it very seriously at first, but over time, I fell in love with being on mic.

Merk Nguyen: I’m a proud second generation Vietnamese American from Washington State who loves alliterations and sad songs. I got my start through KUOW’s RadioActive Youth Media Program in Seattle…after applying three times…and became a freelance radio reporter a few months before the 2016 election. My first assignment was to cover a Ted Cruz rally in Coeur d’Alene, Idaho. I was probably the only non-white person there and as uncomfortable as it was, it was worth it because my story ended up on the NPR hourly newscast the following morning.

From there, I continued to study journalism and media production in college afterward but felt I wasn’t able to express myself the way I wanted to. I started listening to more and more podcasts and found escape and inspiration in shows like Keep It! from Crooked Media. I was drawn to the hosts and the hilariously honest ways they presented themselves to the world. I thought, “I want to be someone like that.” Thankfully for me, a friend at RadioActive said YR Media was looking for young people to host a new podcast.

Nyge: I actually heard about YR Media (formerly known as Youth Radio) through one of my friends too. I was in biology class when he told me about a national talent search for a host position he applied for but wasn’t sure he’d get. He said I might have a better shot at it, and it looks like he was right. Love you bro.

For those who haven’t listened to the show, how would you describe Adult ISH? Merk: Remember the days when landlines were still a thing? They were the best way to keep in touch with your friends, talk about stuff your parents said you were too young to know about, random things you saw on TV or heard people whispering about at school. Our show is that landline for anyone who identifies as an almost-adult who wants to get better at growing up. Big plus if you were born in the mid 90s like we were! But it seems people “young at heart” also vibe with our show.

Nyge: This show is about two people just trying to figure life out. We do that through all kinds of audio segments to keep things fresh, cuz you know how we millennials/GenZ-ers have short attention spans, right? One episode we might do a roundtable with our friends and a surprise influencer like someone from The Breakfast Club. Another week we might switch it up and do more first-person storytelling like The Moth. Or we might feature some spoken word or live music. Basically, each episode is a delicious surprise, just like when servers walk up to you with a trayful of fancy hors d’oeuvres at a fancy event…just kidding — I’ve never been to a fancy event like that, but I imagine that is what our show is like.

One thing I’ve loved about the podcast so far is how every episode revolves around a theme. What goes into choosing an episode’s theme? And how do you then go about preparing for each episode?

Merk: Almost everything stems from actual conversations Nyge and I have on any given day. We come up with the theme by letting the topics come to us instead of the other way around. The high school newsroom interns at YR Media chip in too. One time, none of the male-identifying interns came in, so all the female interns started talking about pap smears asking, “What the heck is it?” and “Are there S&M clamps involved?” That was the seed of inspiration for our “Below The Belt ISH” episode where a 17-year-old, who hasn’t ever had a pelvic exam herself, gave us the lowdown.

Nyge: To give a little more of a peak behind the curtain: Our “Mom ISH” episode is an example of how our off-mic convos can turn into full-on productions. Merk and I went out for Korean BBQ one night and after a couple glasses of soju, I found myself opening up about how I used to be super close with my mom and how her severe memory loss impacted the relationship. That conversation led to me telling the most intimate story I’ve ever told to anyone.  At the same time, Merk was going through some momma drama of her own, so ultimately piecing our “Mom ISH” episode came naturally to us.

Merk: We aim for themes that Nyge and I can talk about from our distinct perspectives. At the same time, we’re at our best when we tap into universal experiences of growing up. For example: managing friendships — how they can hurt or heal — or candid curiosities like “How do dudes feel about male birth control?” and “Why are my parents trippin’ over my ‘communist’ haircut?” Also, throughout the season, we also want to level up our actual life skills by talking to actual experts on topics like “Save up for retirement, or a Jeep Wrangler?” and, specifically for me, ”How do you resist impulse shopping?”

Nyge, you live near Oakland, and Merk, you live in Brooklyn. What’s it like making a podcast together from opposite coasts?

Merk: Surprisingly, seamless-ish. I know that’s not really the case because multiple studio engineers, ISDN connections (basically an expensive phone line that connects our studios) and our senior producer, Davey Kim, are making it all logistically happen, but I feel like I see Nyge in person all the time, at least on Google Docs and FaceTime. That part is key for our dynamic to work since the show is driven a lot by our personal experiences. I will say, in the early days of Adult ISH, Nyge and I were running up the ISDN bill because we didn’t have the finesse that we do now… I should also say I actually left Brooklyn not too long ago. I’ve been in Oakland for the past three months to finish up this season. I’ve since reassessed my finances and figured it’d be best to move back in with my parents in Seattle for a while.

Nyge: As I mentioned before, I live with my family in Richmond, which is a bit north of Oakland. So I have the pleasure of driving through Bay Area traffic to get to YR Media’s HQ in Downtown Oakland. If you don’t believe me, I have plenty of parking tickets to prove it. Like Merk said, we basically “see” each other every day. After all, Merk and I are part of the screentime generation. Unfortunately, unlike Merk, I do get to see Davey everyday though.

Lastly, what’s ahead for the show? Are there any specific episodes you’re excited to release?

Nyge: We also have local Bay Area celebrity comedian W. Kamau Bell on our “Black ISH” episode, where we get into awkward social situations we’ve had as black men and how we’ve used humor to get through them.

Merk: I’ve been told by my own family members that I’m “too dark” and would look better if I had lighter skin. I didn’t realize how deeply those comments impacted my self-esteem but talking openly about that with ladies who shared those kinds of hardships was extremely therapeutic.

Nyge: Speaking of therapy, Merk and I talk to a therapist about seeking counseling for the first time in our mental health-focused episode “Me, Myself and ISH.” She goes into why it matters for people of color, like us, to get help from people who share the same cultural background that we have.

Merk: I’ve yet to actually find my own therapist, but I feel like I have some tools now to start looking for a mental health professional. I should also mention we’re excited to share more episode art and music that the young folks at YR Media plus Remix Your Life plus All Day Play have been cooking up!