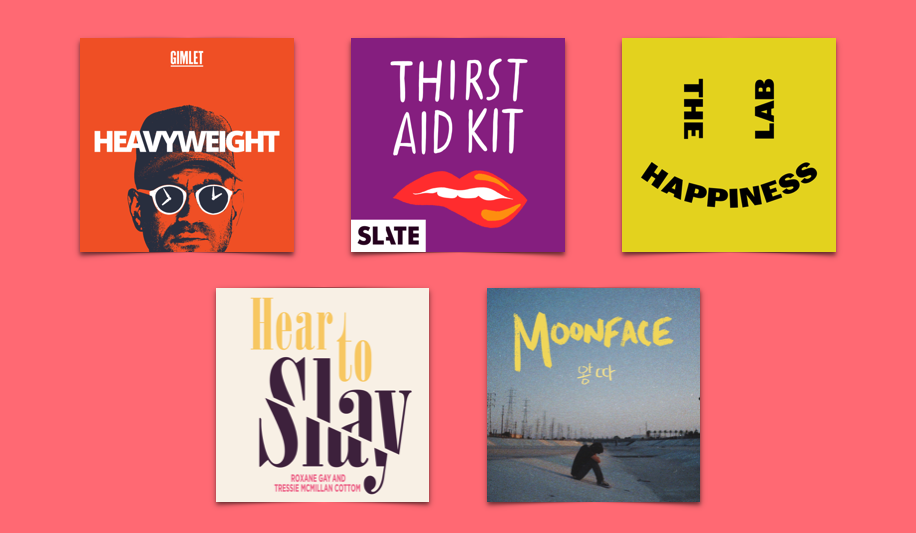 On The Happiness Lab, a new podcast series from Pushkin Industries, host Dr. Laurie Santos presents the latest science on how to live a happy and fulfilling life. Based on her Yale class “Psychology and the Good Life,” the most highly-enrolled course to ever be taught at the university, the show explains that money isn’t always the answer when it comes to achieving happiness, while being “other-oriented, or doing nice things for other people” can bring you long-lasting joy. Santos presents her field’s findings together with a diverse set of experts and guests. There’s much to be learned from the podcast, and just three episodes in, we can already say that it’s possible The Happiness Lab could change your life.

The world’s favorite funny/melancholy/hopeful podcast returned last Thursday with “Jimmy and Mark.” The episode’s first half, about a group of four kids — all 13 or younger — taking a 200-mile unsupervised bike trip across New England, is all fun and games, noticeably missing a central relationship-mystery for host Jonathan Goldstein to unpack. But when the emotional wallop reveals itself and hits, it hits hard. Four seasons in, Heavyweight has lost none of its ability to deliver catharsis to its subjects. Goldstein’s good intentions and willingness to let the story develop based on who answers his incessant phone calls extend boundlessly into the future.

Thirst Aid Kit is back. After three seasons at Buzzfeed, the hit show that “examines celebrity lust” is now at Slate with new episodes out every Thursday. On the podcast’s first episode since its nine-month hiatus, hosts Bim Adewunmi and Nichole Perkins explain their thirst for Dan Levy, star and co-creator of the Emmy-nominated sitcom Schitt’s Creek. “You look at him and there’s the initial pow,” says Adewunmi, “and then waves of it hit you hours later.” Perkins, for her part, considers Levy her “lushly eyebrowed king.” It’s a pleasure to hear this pair back on air — their chemistry is simply undeniable — and we can’t wait for the rest of season four.

Coming October 9th, MOONFACE is a six-episode fiction podcast from LA-based producer James Kim, starring actors Joel Kim Booster and Esther Moon. Kim Booster plays Paul, a Korean-American in his late twenties who lives at home with his mother (Moon) in the Southern California suburb where he grew up. The series follows Paul as he grapples with whether to come out to his mother, a decision made more difficult by the fact that Paul doesn’t speak Korean, while his mother does not speak much English. Featuring convincing, lived-in dialogue and a minimal but effective score interspersed with music from Clairo, Kim Jung Mi, and Oyster Kids, listening to MOONFACE feels like watching an excellent indie film — a rare feat in podcasting that makes the independently-produced show a must-listen.

With her status as a defining voice of our time, it was inevitable that Roxane Gay would make her mark in podcasting. Alongside writer and sociology professor Dr. Tressie McMillan Cottom, Here to Slay is a show exclusive to the subscription platform Luminary. The podcast is unabashedly feminist and intersectional. As a testament to its hybridity, Here to Slay successfully melds academic thinking with popular culture to produce discussion on topics that range from white privilege in the art world to the problematic nature of the Popeyes chicken sandwich. Effervescent and hilarious, Gay and McMillan Cottom are regularly joined by a diverse set of guests including journalist Rebecca Traister and novelist Marlon James. It will be interesting to see how Here to Slay develops into its second season, as it’s currently unclear whether the interview format or the hosts’ cultural criticism will come to dominate future episodes. The only thing that’s certain is that Gay’s move into podcasting is a natural progression in her career as a writer working with themes of understanding the physical body through the medium of language. Combined with her co-host’s funny and incisive interview skills, Here to Slay is challenging and pleasurable in equal measure.