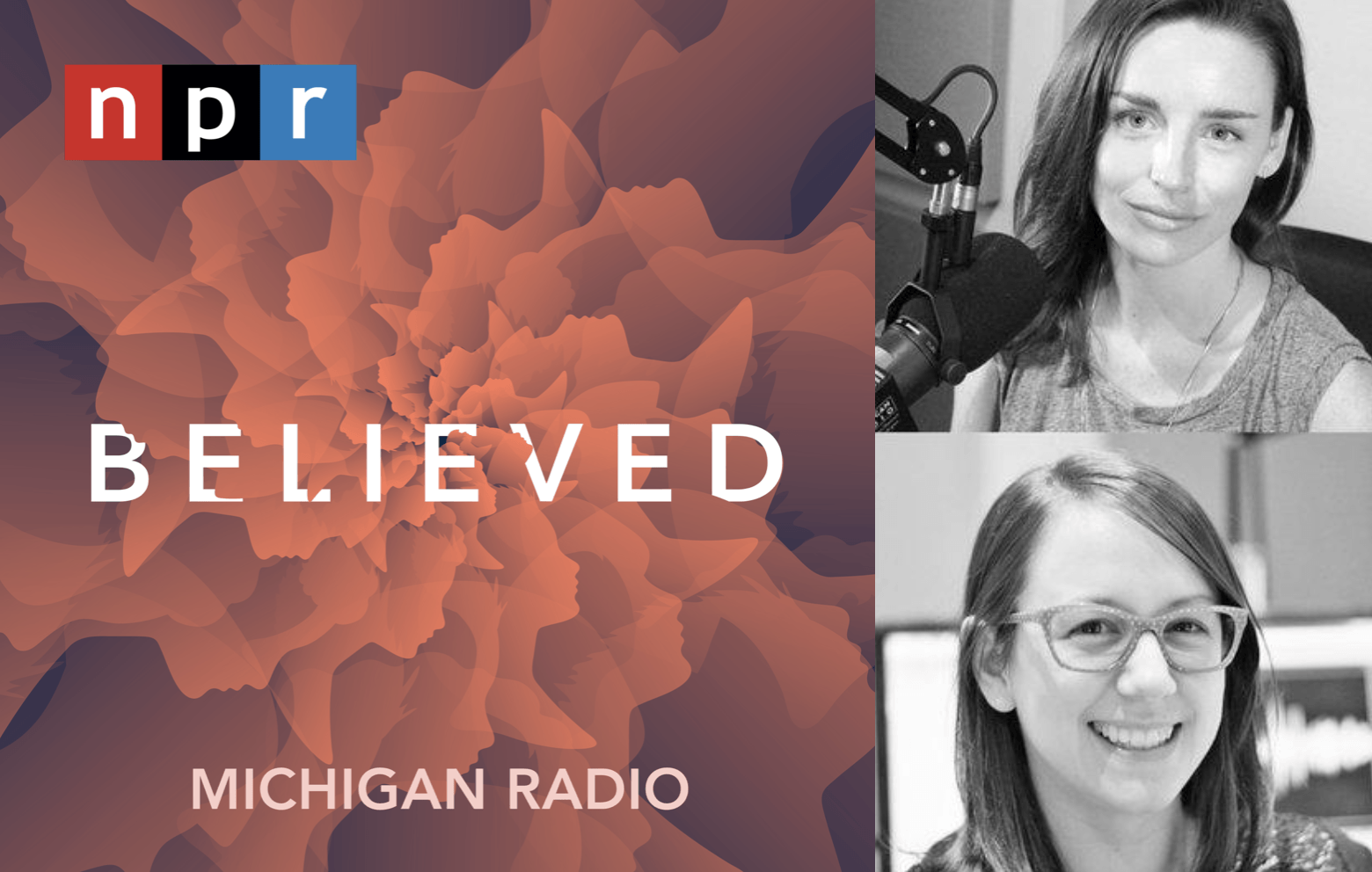 Michigan Radio’s compelling new podcast Believed seeks to answer what so many people wanted to understand about the Larry Nassar case: how did this happen?

In case you missed it, Nassar is the former Olympic gymnastics doctor who sexually abused hundreds of patients for more than 20 years. Hosted and reported by Kate Wells, who has exhaustively covered the Nassar story since 2016, and Lindsey Smith, who led Michigan Radio’s Flint water crisis investigative team, the mini-series is not only an intimate look at how a team of female survivors, detectives, and prosecutors won justice, but also an unnerving exploration of how well-meaning adults can fail to believe — often at critical moments and at the expense of the health and wellness of those would could not advocate for themselves.

As a former competitive gymnast and sports/radio journalist myself, I wanted to know what shaped the reporting and storytelling process for these two award-winning reporters as they developed the series — and what surprises they found along the way.

Did anything surprise you after having reported on this case for so long?

Smith: I knew going in that the territory would be a rich one for reporting — it’s a super-complex story with lots of nuance. More was becoming known all the time. I was surprised sitting down and not only talking to the women, but when we’d go to write it, how to come up with a clean storyline. Something I definitely wasn’t anticipating was internalizing it so much. It’s tough content, and though I’m not new to it, I don’t think I’ve ever shed as many tears as I have these past few months working on this.

Wells: Because I’ve been reporting on this case almost exclusively, I didn’t think I’d be surprised anymore. But in doing the interviews with the women, after the sentencing, after it became a national story — I was surprised how easy it was for them to go back to that place of doubt. If you spend that long not being believed, you go back to that place so quickly. Some of the survivors would say, ‘you guys believe me, right?’ This is even after they had made statements in court under oath. It’s very easy to go back there. It’s so internalized. It’s always so accessible to them. The Kavanaugh hearings, for example, were very difficult. It feels very personal.

The second thing that surprised me was how defensive I feel about the sport and how nuanced gymnastics culture is — it’s easy for someone from the outside to judge those who missed the red flags or to immediately pull their child out at the first sign of difficulty. Not to excuse the things that are obviously deeply dysfunctional, but it’s not just gymnastics that has a problem.

How did you choose which stories to cover first and how to cover them?

Smith: We storyboarded early on. We wanted to first understand what this podcast was not going to be about first. That was a big part of it. There was still a lot of stuff happening and investigations were still going on. We still had much to uncover at USAG and MSU.

Were you reporting this in real-time?

Wells: Pretty much. It all started back in 2016, when this story was big in Michigan. It involved major state institutions and became a beat in a weird way, so I got to report on this in real time as the case unfolded. I was building sources but I didn’t have the clarity that a veteran investigative reporter like Lindsey does. She developed sources and insights I had never even thought of because she’s done these longer, investigative pieces. She said, ‘here’s what we still need to know.’

Tell us more about what you learned from talking with the survivors?

Wells: These women — the survivors — they’ve put their entire lives into this. They’re made of steel. The alumni of MSU, for example, if you read the list of stuff they’ve gone on to do, there’s a specific type: they are getting sh*t done. They’re U.S. attorneys, they’ve started their own businesses, some of them are even judges. Kyle [Stephens] and Rachel [Denhollander] have been the drivers of their stories. For some of the survivors, they’re just starting out — and they’re reaching out to them as they’re trying to just get a sense of who they are and what happened to them. That’s been crucial to this case — they have modeled for so many people who and how strong you are and can be.

What do you want listeners to take away from the series?

Smith: You could have easily missed this [case]. You may have seen the national media circus and thought to yourself, ‘What the hell was wrong with those people?’ Maybe you put some distance between yourself and what seemed like ‘that crazy sh*t over there.’ We wanted this to be a nuanced point-of-view of the survivors and parents and those who were directly involved, and provide a platform for them to tell those stories. Hopefully, we can learn from it. This could happen to you. It might make us feel uncomfortable, but it should make us better as people.

Also, I can’t overstate how much Kate has put into this. She took such care and sensitivity with the survivors. She even had her first baby in the middle of making the series!

What will you do next?

Both: Naps. And hopefully reporting on something else together.

Kristin Marguerite Doidge is a writer and lecturer at Loyola Marymount University whose work has appeared in Fortune, Marie Claire, The Atlantic, and on NPR. She holds a master’s degree from the University of Southern California’s Annenberg School of Journalism. She was a 2018 LARB/USC Publishing Workshop Fellow. Connect with her on Twitter @KMarguerite_USC.