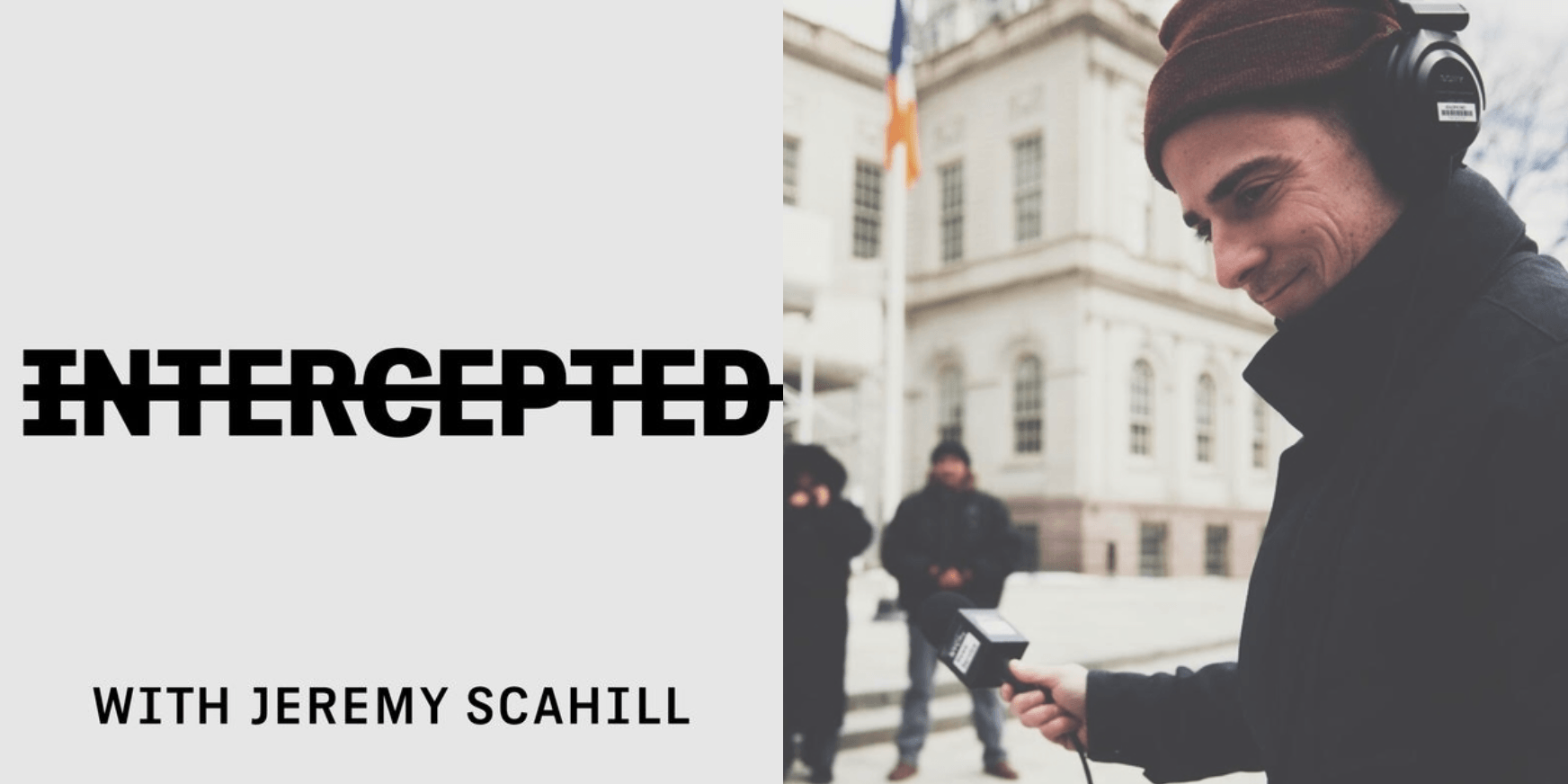 Jack D’Isidoro is the producer for Intercepted with Jeremy Scahill. His work has appeared on WNYC, The Takeaway, PBS, and The Atlantic. Jack received his MA in journalism from the CUNY Graduate School of Journalism and is based in Brooklyn.

Sophia Steinert-Evoy: When did the planning start for Intercepted — was it after the election?

Jack D’Isidoro: It was. Initially I was introduced to the project at a time when all prevailing wisdom was pointing towards a Clinton victory. I was already pretty familiar with the kind of coverage The Intercept was doing, and had a good idea of how that kind of podcast would sound like with Jeremy Scahill at the helm. This was a guy who was very critical — and rightfully so — of the Obama administration’s foreign policy and use of drone bombs. The expectation was that Hillary would be more or less maintaining that status quo of American imperialism and the indiscriminate killing of civilians. Intercepted was going to hold the powerful accountable no matter who was in charge.

This was just a few weeks before the election. And then Trump won. It felt like the mission statement had changed almost. With Trump in power, it felt like there was just much more of a need for something like this. It felt like a responsibility, to navigate the Trump presidency with everyone. And I feel we’ve really tried to cover all the heinous actions produced by this administration, but in our own way. As Jeremy says, “history and context matter.” It’s really true. You can’t talk about these mass shootings and the NRA without addressing the white supremacist origins of the Second Amendment. Or you can’t talk about interference in the 2016 election without acknowledging that the U.S. has meddled in other countries’ elections more than 80 times since the end of World War II.

Beyond that, we try to focus on stories—and a lot of credit goes to Jeremy who has made a career of it — that are outside the mainstream news cycle and are having real-world, often deadly consequences on peoples’ lives. While the latest palace intrigue in the Trump White House might be hilarious to talk about, and often is, there are more important stories out there — the U.S.’ role destroying Yemen, or the ghoulish brother-sister duo Betsy DeVos and Erik Prince and their absolutely atrocious agendas.

So, Intercepted has been an amazing opportunity. Anyone approaching a producer and saying you can start something from scratch, and make it your own — that’s awesome. And I think at the end of the day it’s a reflection of what we think is important culturally — whether it’s the poets, artists or musicians that we’ve had on the show — but I also think there’s a certain amount of service journalism in it, too, where you’re providing the news.

I remember when I first started working here I saw Jeremy give a talk at Cooper Union, and people really hung on to what he was saying. People feel a lot of anger and fear and uncertainty, and they turn to people like Jeremy. I thought if he can inspire people like this, we need to capture this feeling and put it into the podcast and do it every week — and I think we have.

I wanted to ask about the structure of the show. Could you talk about how you built that, why you built it, and then why weekly?

It came to fruition organically. We wanted a news magazine show where there would be multiple segments. But the funny satirical stuff at the beginning wasn’t intentional. We wanted to have some sort of cold open, and if you go back to the first three episodes you’ll notice that it doesn’t sound like the things that we do now. For the first episode, Jeremy just read 1984, and then there was rain, Trump getting sworn in, and the clock striking thirteen.

Then it was President’s Day weekend, in February, and it was that Monday so the office was empty and I had a bunch of time on my hands. Trump had just given his first press conference alone as president and it was fucking insane. It reminded me of when I was right about to graduate from grad school and I had all these final projects. Twitch did this thing where they broadcasted all of Bob Ross’ [The Joy of Painting] episodes non-stop, 24/7. I would just have it on in the background to soothe myself and I was like, you know what, we should mash this all up. It just worked beautifully and was hilarious. We got a lot of great feedback about it, so we thought we had to do something like that again. Then it just became part of the show.

I think what we do with these satirical openings is to say there needs to be satire. Given the serious and often depressing nature of the stuff we talk about, you kind of need to laugh about it without being so nihilistic. Plus the fact that Intercepted is a podcast means that the medium allows for so much. I mean, don’t get me wrong, I’m eternally grateful that they allow me to experiment with audio montages or collages; that’s great. Not only are we a news podcast, but I want to explore the medium a bit and explore what it means to be a podcast.

Why do think radio is important? Besides the fact that you like making it, why do you think we’re seeing such a resurgence of it?

I think that radio requires a certain part of your brain that you don’t often use — like the part of your imagination that you use when you read. And when it’s done right, it’s really special. I think that’s what people are figuring out, that podcasts have this latent power in them. Making them is an antagonizing process sometimes: it can be brutal and frustrating and even when you have an idea of what you want to do in your head, sometimes it just doesn’t sound right. Other times you get lucky and it does, but I’m never going to stop trying to figure out how to make something sound good. That’s part of the fun of it. You have an hour of tape and it’s this little puzzle. You chip away at the pieces, and I think of it as carving a statue: somewhere underneath all of that it exists and you have to find it.

The show is pretty long for a news podcast. Can you talk about the episode length?

So the Apple Analytics just came out, which tells you where people stopped listening. And according to that, people listen to the whole show, which blows me away. The reason why the show’s so long is because we just got so ambitious, and our production schedule is crazy. It’s not long because we don’t edit the show. Recently we had the Marxist scholar David Harvey on, and while the interview was great, I ended up cutting it down to like twenty minutes from seventy-seven. So Jeremy’s having these really heady, in-depth conversations with people. He recently interviewed James Risen, who now works here, and we released it as an hour-long interview and people responded really positively to that.

So to answer your question, length is definitely something that we think about, and it has gotten longer. I’m still scratching my head as to how this has happened. I think we just put more things in the show. We started with two interviews per show, and then it went up to three, and at the end of last season it was sometimes four. It’s just a reflection of what’s happening now. There’s just so much stuff going on all the time; if we don’t cover it, then we feel like we’re doing a disservice to the listener. I’m consistently amazed and emboldened by the listeners.

Where would you say that Intercepted fits within the podcast landscape?

I feel like we’re definitely an outlier. We’re a little bit more irreverent, and we’re lucky in that we can operate outside of the traditional news media landscape. I mean, there’s definitely a point of view. I hope we’re able to attract a wide audience of both people who are familiar with Jeremy and the work that The Intercept does and also people who just like podcasts in general and want to stay informed. We’ve really tried to experiment: We’ve done radio dramas with Edward Snowden’s archive, for example. And we do things beyond interpreting the news or giving the latest tick-tock on the Trump Administration. I hope people are able to appreciate or get into the show because we also offer those kinds of things. In addition to that, we also have awesome musicians on. Under fascist governments, they try to oppress culture and we want to highlight it, so I hope that comes through.

How do you envision the future of the show?

I love everything we’ve done so far, but I would love to push the envelope more in terms of what we can do creatively — whether it’s reported audio pieces, going out into the field, or doing more audio dramas. I’m surrounded by a stellar team of producers, and we’ve already started trying some of those things. It’s hard because we have to make the show every week, but I would really love to take what we do in The Intercept and translate it into a narrative storytelling piece. I’d love to teach all of the very talented reporters at The Intercept how to use a Zoom [microphone]. That stuff takes time though. You can’t just sit in front of your computer. But that’s my dream. I might have to just go and do it.

Sophia Steinert-Evoy is Podcast Review’s interviews editor. She also works on The Organist podcast from KCRW and Citations Needed. She is based in Brooklyn, NY.