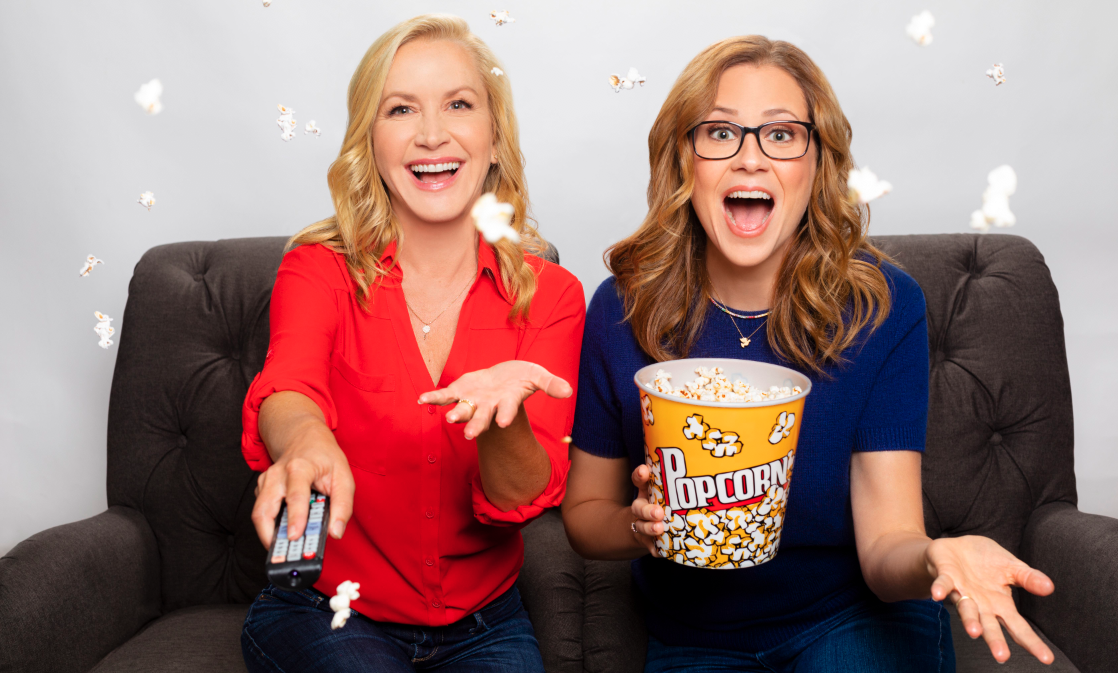 Bears. Beets. Battlestar Galactica. BFFs. Behind-the-scenes. Beesly. What else could you really ask for in a rewatch podcast for The Office? Thankfully, that’s exactly what we’ll be getting when Stitcher’s comedy network, Earwolf, launches The Office Ladies on Oct. 16.

Pam Beesly’s real-life counterpart, Jenna Fischer, and her Office nemesis (but real-life best friend) Angela Martin (Angela Kinsey) will co-host the series, breaking down every episode of the beloved NBC sitcom from start to finish. Each week, the ladies will share tidbits from behind-the-scenes and answer fans’ burning questions from their distinctly fun, female, and frank POV. Joining the Party Planning Committee for the podcast is Colin Anderson, who serves as executive producer for the series and vice president of comedy for Earwolf.

“So you’ll get three fast facts and then after the fast facts we’ll go through the episode,” Fischer excitedly shares on the podcast trailer, while Kinsey instantly adds a favorite — albeit less-that-pleasant — memory from the Booze Cruise episode. (Spoiler: it was something even Jenna didn’t know!)

Fans can listen to Office Ladies on their favorite podcast app or on Earwolf’s website. (Fact: It’s already even spawned a spinoff fan podcast, The Other Office Ladies.)

I spoke with Anderson about how the Office Ladies podcast came together, gems we can look forward to, and why we still need shows like The Office.

Why make a podcast about The Office? Why now?

The upcoming 15th anniversary of the show had Angela [Kinsey] and Jenna [Fischer] reminiscing about their time together on The Office. They were having a conversation that was just really good, and they ended up recording it. They sent over a sample and the chemistry was just there right away. They’re these weird, nerdy super-fans of the show. It’s really gorgeous. They just kept saying, “I can’t believe we were so lucky to be on this television show.”

So cute. So how has the process been so far?

They recorded the pilot episode at home and then again at the studio. They’re super professional and dedicated to the process. They’re open to retakes and have been studying how to make a podcast. These are the kind of people we want to work with and who are great for listeners as well. Jenna, for example, said she used to always study a lot and did her homework, and it’s the same with this. They’ll bring notecards with their favorite memories so they don’t miss anything. It’s sort of like audio commentary — this is how an episode was made — and here’s what was going on in our lives.

How do you think this experience will change or impact our engagement with this or perhaps other sitcoms?

Audio is a storytelling medium. It’s well-suited to anecdotes. And since DVD commentary has been lost to history for the most part, this sort of replaces it. There’s a familiarity to it. And they’ll be doing each episode in order. They’ll end with a reminder of what’s coming up “Next week…” so that listeners can go back and view the episode again before the next episode of the podcast.

What is it about The Office that feels like comfort food as in, we keep going back to it years later?

It’s one of the last great sitcoms of network television before the fragmentation of streaming and even more cable options. It was the end of “Must-See TV” and was really something that everyone watched together on Thursday nights. Now, it’s gotten this whole new life because of Netflix. It’s just becoming more and more valuable. It’s what people turn on when they want some company.

Totes. So are there any surprises we can look forward to?

Nothing I can reveal right now. But one tiny thing was when Angela said “this was the moment we became best friends” — it was during the basketball episode in which the guys in the warehouse play the guys upstairs — and Angela and Jenna ended up sitting next to each other on a bench for several hours. That’s when the BFF status happened.

I love that! Can you put your finger on what makes the actual Office Ladies — Fischer and Kinsey — particularly special in real life?

I’ve never really been that into recap shows, but I got on board with this because, for one, it’s The Office, and two, because of the chemistry between Jenna and Angela in both the pitch and the pilot. It reminded me of Jonathan’s [Van Ness] Getting Curious. It’s like watching them on Instagram — the way they engage with each other — they’re so supportive. I say to myself, “I want to be a part of that friendship.”

Kristin Marguerite Doidge is a writer and lecturer at Loyola Marymount University whose work has appeared in Fortune, Marie Claire, The Atlantic, and on NPR. Her forthcoming book, Nora Ephron: A Life, will be published by Chicago Review Press in Spring 2021. She holds a master’s degree from the University of Southern California’s Annenberg School of Journalism and she was a 2018/2019 LARB/USC Publishing Workshop & Incubator Fellow. Connect with her on Twitter @KMarguerite_USC.