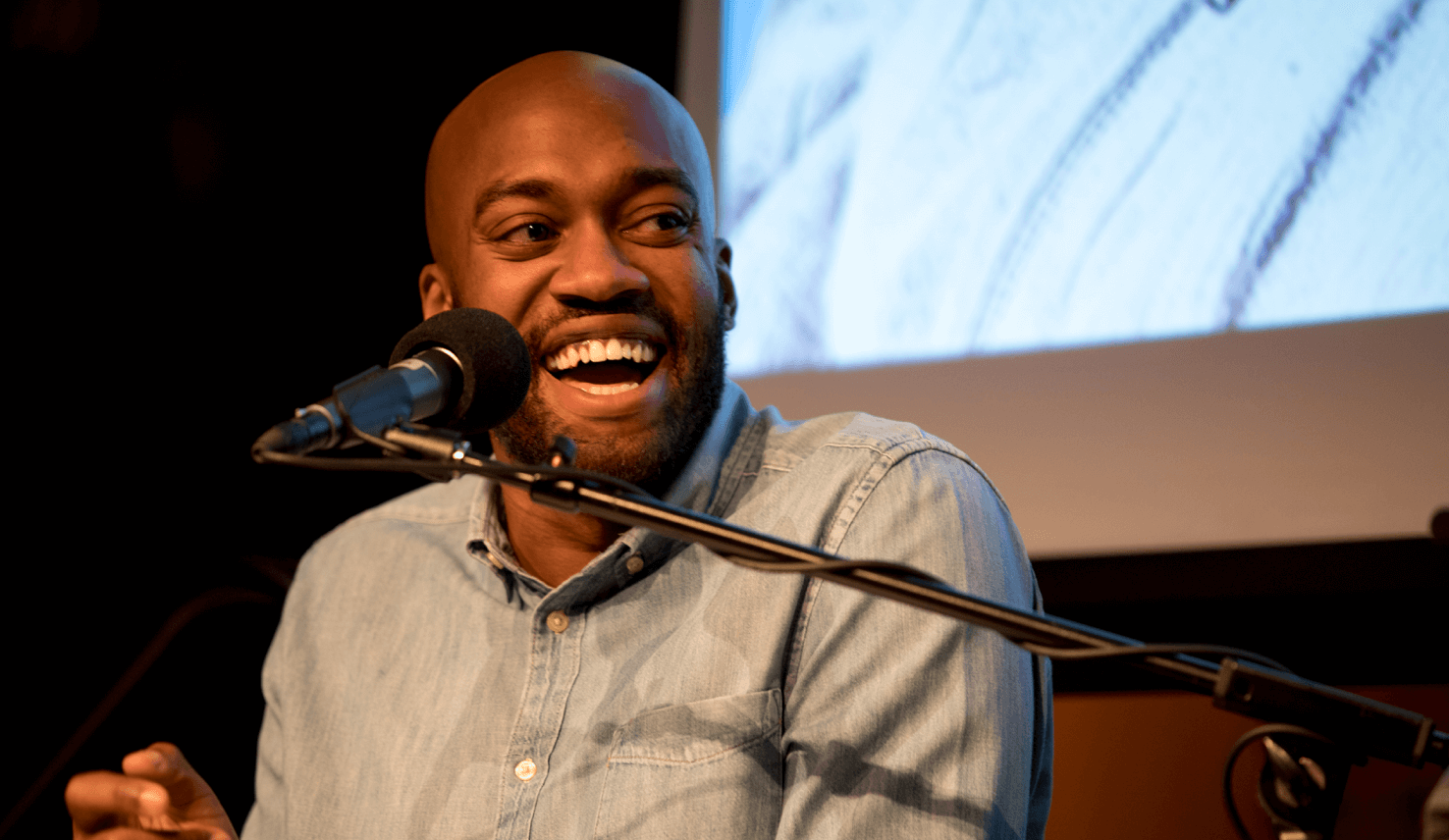 Before hosting It’s Been a Minute, Sam Sanders was an NPR politics reporter, covering race and pop culture ahead of the 2016 election. Today, he maintains that campaign reporter candor with each guest on his show.

On It’s Been a Minute, Sanders and his guests speak honestly, offering a refreshingly personal take on the news podcast format. Across the last few weeks, in his conversations with Black creatives and writers ranging from Tracee Ellis Ross to James McBride, this has meant speaking openly about despair, weakening faith, and the historic and systemic injustices that have brought us to our current moment. But Sanders leaves space as well for joy and humor to find their way into the conversation when his guests guides him there.

In the middle of a movement where we drop everything to watch videos of police violence and swelling protest crowds, the voices on It’s Been A Minute can come with you wherever you go, and they will stay with you long after their conversations are over.

For people who are new to It’s Been a Minute, how would you describe the show?

I think the entire approach of the show is to talk about the news the way you talk about it with your friends. So, I’m not the newscaster that knows everything. I’m that guy who read the same think piece you did this week and is like, really? Let’s talk about that.

We had a chat this week with Tracee Ellis Ross, whose work I love, and we had a conversation not just about her new movie, but about…what is it like to be you right now? You are a Black actress who likes to bring people joy through her work, but no one’s really into joyful stuff right now. Or are they? Explain.

So, it shares a lot of DNA with other NPR shows: there’s discussion of the news, and interviews with newsmakers, but it’s trying to be informed by a lay person’s curiosity. What can I not stop scratching my head about? What am I still processing?

After the protests hit, we had a few episodes where I wanted to record the conversations that I would have in this moment with friends, family and colleagues, and we just put that up there.

You’re really comfortable with switching up the show’s format: You’ve got your Aunt Betty’s introductions, your “Who Said That?” segments, panels, one-on-one interviews. How do you decide what elements to include in an episode?

It’s an evolving process. A lot of the segments that have become iconic parts of the show are the brain children of Brent Baughman and me. Brent was a founding producer of my show and also the founder and producer of the NPR Politics Podcast. A fun fact about Brent is that he’s obsessed with late night TV — he really loves Letterman. And so, for the feel of our segments, we always go back to late night.

Even the idea of Aunt Betty — the fun, friendly announcer for the show — that’s from late night. It’s funny because I secretly don’t like late night TV. I’m too tired by that time, and it can be campy, but a lot of the DNA for our segments comes from that. We’ve ended up taking out a bunch of the segments that were there since the start of the show; after a while, we had strip it back some. But people really love my Aunt Betty. I love her for obvious reasons, but people really liked her.

There were certain moments where it just felt important to bring her in more. When the George Floyd stuff happened, I’ll never forget: the protests had gotten hot where I am in downtown LA. She’s the one in the family that is constantly checking in. So, she called to check in, and we’re having this heart-to-heart about protests and race and what she saw as a child of the South. I remember freezing mid-conversation. I said, Betty, I know this is weird, but this conversation is actually good radio. I’m going call you back in a day or two, and you’re going to have the same conversation with me again and it’s going to go on the radio. And I think she felt weird, but she also felt good about it because it was a thing that folks needed to hear.

You know, we’re constantly aware that this is a show that deals pretty candidly with race, but the majority of our audience is white and there are white listeners who are curious and want to know and learn. I’ll tell you who is a great teacher, my Aunt Betty. But the thing is, we’re not asking her to be a teacher. We’re asking her to share her experience, and then people can learn from that.

You could hear grief, anger and exhaustion in both your voices in that conversation. I actually want to ask you the same question that you asked her during that conversation: What do you think that Sam today would say to grade school Sam about what’s happening now?

I would tell him that there’s this thing that happens when you have a pretty good upbringing, regardless of your race. You say to yourself, well, life will be good for me because life has been good for me. I was very lucky and fortunate as a child growing up in a strong, reasonably incomed family. I think my assumption for a lot of my young life was…I’ll just be okay. Because things are okay for people that come from families like mine.

What I would say to that kid now is that you aren’t above any of this stuff. You’re not better than any of this stuff and anything that happens. Any suffering from someone else could be at your front door, and you could be the one suffering as well. So, don’t look away. I would tell a younger me, never look away. 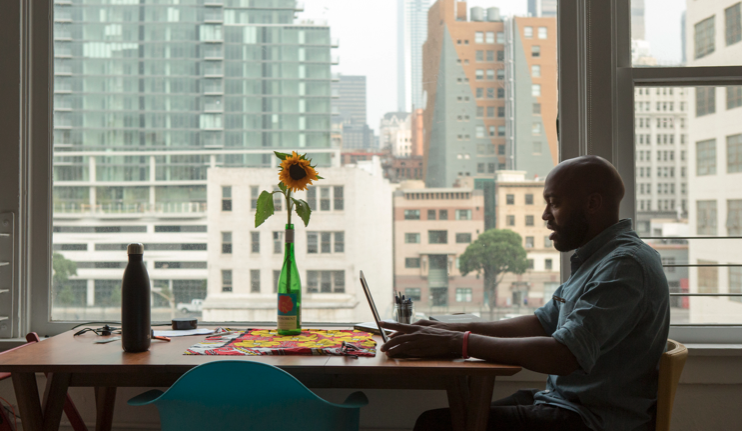 Whether it’s with Aunt Betty or Tracee Ellis Ross, how have the conversations you’ve been having on the show helped you get through the last few weeks?

I’ve realized over the three years of making this show that I’m sometimes able to be more candid in these interviews than I am in actual conversations with friends and family.

I talked with two ministers about dealing with faith and the year of challenges to everyone’s faith that is 2020. I got really real with them about being tired and exhausted as a Black person right now. The level of candor in that conversation…I’m not sure I’ve had that in actual talks with my friends.

Whatever it is, the mic kind of opens me up and I think it opens up some of our guests. That’s really what I want to happen, especially with someone like Tracee Ellis Ross. You’re used to doing press, and you talk about the movie, you talk about the show, you talk about the beauty products. Someone like her, I think, is refreshed when someone asks, “How do you feel?” There’s something freeing about hearing those kinds of questions in the context of an interview, because they know that you’re really listening, too.

Could you talk more about that particular interview with the ministers, and the moments that surprised you talking with those two women?

That interview was about what they’re doing right now, but also about me really wanting to talk to a minister. You know, I’m a Christian, but I haven’t gone to church in years. And what’s been really interesting for me is that the one thing I want to do most, once lockdown is over, is go back to church.

So, I think that interview was just me expressing that over the microphone. It’s funny because that’s a thing I don’t really tell people, that I want to go to church again. But I told them. We’re all more candid on the mic right now.

Besides faith, what other through lines have you felt emerging in your shows during the pandemic and during the Black Lives Matter protests?

Another thing that’s really being highlighted over the last few weeks is this reality that all of us often see the same thing differently. All of us are bringing different perspectives to the table, and all of us have certain blinders on.

We see the same idea echoed in this conversation about journalistic objectivity. There’s no such thing. Everyone’s different and everyone’s truth is a little bit different from someone else’s. So our job in public radio and as journalists is to look at how different folks are seeing the same thing, and to stop pretending that there’s one correct version. It’s kind of annoying because you want to say, here’s the one thing, but it’s just not that. We have to expand the conversations. We have to accommodate that.

The new Phoebe Bridgers album. Her kind of music…it’s not usually my cup of tea because I find it too much of a downer. But something about her new album and right now, it works. The music is beautiful and she has this incredible candor in her lyrics. She tells you exactly how she feels and exactly what she’s doing in these moments. I think we need so much more of that. Stop beating around the bush. Say what it is, say what you feel. That’s the only way that we process these feelings and move forward together.