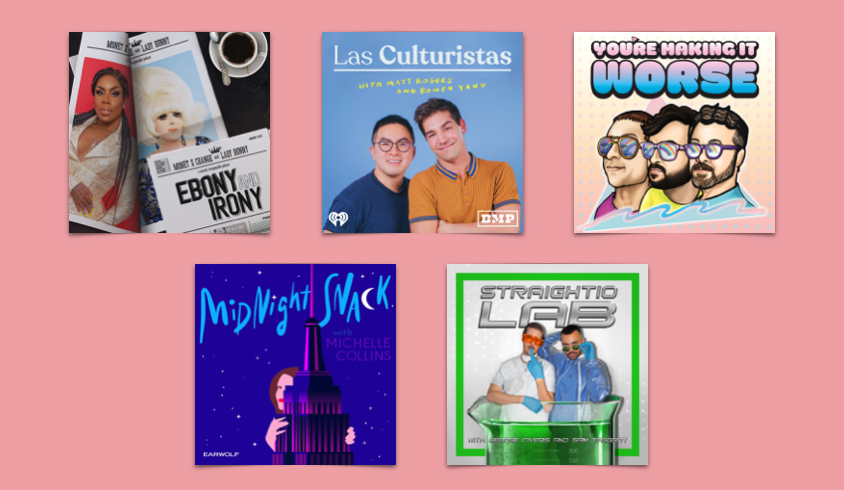 Comedy interview podcasts are hardly groundbreaking, but there’s a reason this format has persisted atop the medium. I mean, who doesn’t want to laugh along with their favorite comedians and celebrities as they tell stories and discuss current events? However, in a career where they are usually the center of attention, comedians don’t always make for the most natural podcast hosts.

Indeed, it takes true skill to straddle the line between making things funny and providing actual insight. A good host needs to have an angle listeners won’t have heard the guest discuss in every other podcast or talk show. When interview podcasts are a dime a dozen, it’s difficult to find one that hits all these marks, but these five podcasts lead their genre by consistently delivering stimulating discourse that leaves you howling with laughter.

Pop culture experts Matt Rogers (Q-Force) and Bowen Yang (Saturday Night Live) have perfected the ebb and flow of silly and serious conversation. Each episode homes in on what the defining part of culture was in the guest’s formative years and how that influenced their lives. While laughter is always a moment away, the close friendship between Rogers and Yang allows for truly vulnerable and earnest moments. This balance leads to conversations that are as funny as they are moving.

Between her stint as host on The View and her Sirius XM show The Michelle Collins Show (now on Radio Andy), host Michelle Collins is a certified expert in conversation. A self-declared “late night podcast,” each episode of Midnight Snack begins with Collins and co-host Dan Acton laughing as they recount everything from stories of recently befriended swans to bizarre articles about pig cheese. The format then shifts to Michelle interviewing a celebrity guest where her referential humor takes center stage. Rather than asking prepared questions, Collins takes a casual approach, ensuring a more natural flow of conversation.

In their podcast You’re Making It Worse, best friends Eliot Glazer, H. Alan Scott, and Brent Sullivan prove that critiquing queer culture is not only OK but necessary. Each episode uses the queer community as a microcosm to discuss social issues, pop culture, news, and anything else that either irritates or interests them in a round table-esque discussion with their guest. While the three aren’t afraid to “go there,” their humor and self-awareness provide a comfortable buffer to what may otherwise be an off-putting conversation to an outsider. Their simultaneous appall at and appreciation for the queer community provides refreshing takes and allows each guest to voice their opinion without fear of backlash.

In a world of polarized generations, founder of Wigstock, Lady Bunny, and host of The X Change Rate, Monét X Change, combine old and new school in their podcast Ebony and Irony. The drag legends discuss their well-researched and well-spoken opinions on politics and news, never shying away from disagreeing with each other. However, the duo truly shines while interviewing guests, each of which are entertainment and nightlife juggernauts. Their loose style makes for refreshingly unusual discussions of the guest’s past, present, and future endeavors.

Stand-up comedians Sam Taggart and George Civeris take listeners to the edge of absurdism in their podcast StraightioLab. Each episode dissects a different example of “straight culture” from tabletop roleplaying games to The Cheesecake Factory, discussing which aspects make it straight or queer depending on a limitless number of arbitrary reasons. In their brilliant segment “Straight Shooters,” Taggart and Civeris “quiz” their guest on their knowledge of straight culture via rapid-fire questions. The guests must choose one of two answers without knowing what they should base their choice on. The show’s blatant ridiculousness makes for hilarious episodes while also putting their guests at ease, leading to surprisingly introspective discoveries of guests’ lives and why they think and believe what they do.

Ryan Lark is a writer based in Lexington, Kentucky. He can be reached on Twitter @ry_lark and by email at [email protected]