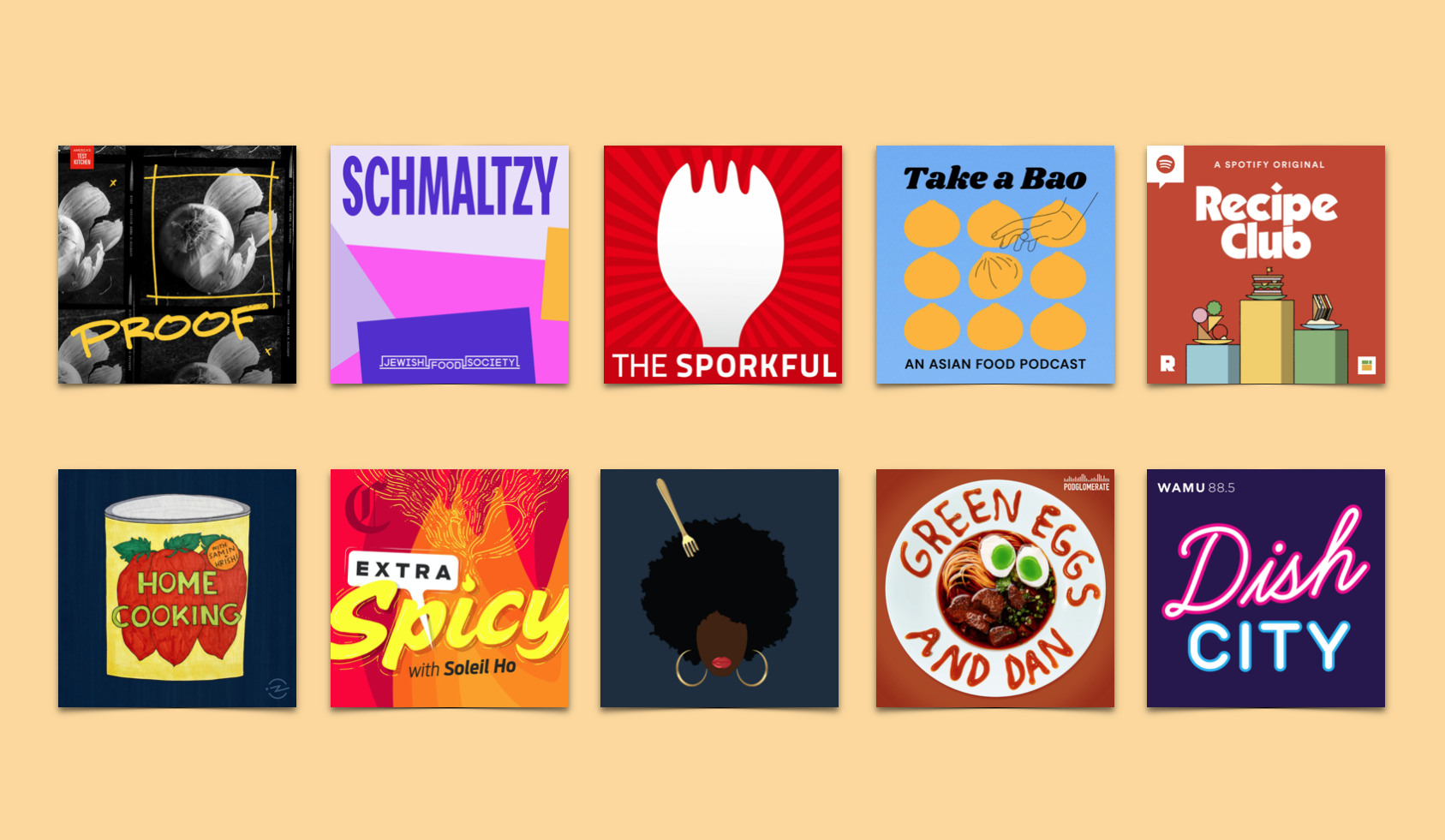 In his book A Cook’s Tour, Anthony Bourdain did not hide his disdain for food television. There he was, employed by his nemesis The Food Network, to shill a travel show about eating and drinking around the globe. “Cooking professionally is hard,” Bourdain wrote, while “writing, eating, and making a television show is relatively easy. It beats brunch.” This quotation goes a long way toward revealing why so many notable chefs, many of whom are featured in this list, have made the recent transition into media. The only reason Bourdain signed a television contract was to enable the writing of his aforementioned book, begging the question of whether he might just as easily have pivoted to podcasting if the medium was more popular in 2002. But regardless of the format — television, books, podcasts — the same question arises: what’s the point of looking at and talking about food if you can’t actually taste it?

Wiser people than I have failed to provide an answer. Listening to a host narrate the sensation of tasting a freshly shucked oyster will never be the same as eating one yourself. But the popularity of food and cooking shows prove that the format can matter just as much as the subject. Passionate hosts, engaging descriptions, and a good mixture of relatability and escapism are key to the food podcast format. Every show on this list incorporates these elements, successfully overcoming what Bourdain called the “ludicrous artifice” of food media to produce fresh, moreish entertainment. Here are our picks for the best food podcasts.

From America’s Test Kitchen comes Proof, a podcast that sounds like the lovechild of Guy Fieri and Reply All. Trust me, that’s a good thing. It’s not about recipes. There are no interviews. Instead, Proof combines food with investigative journalism, a formula that’s endlessly bingeable. It’s just as well that there are ten seasons and counting — we’re already ready for the next course.

Hosted by Kevin Pang, Proof harmonizes compelling storytelling with a lighthearted approach to heavier topics and the result is a show with wide appeal. From pho to puttanesca, there’s a story in every bowl, and each tale is a treat for the ears. Proof’s off-beat commentary, unexpected humor, and witty episode titles (my favorite is “They Know What You’ll Eat Next Summer”) contribute to a show that consistently feels fresh.

Momofuku founder David Chang is no stranger to food media. Between his streaming shows (Ugly Delicious; Breakfast, Lunch, Dinner) and his podcast (The Dave Chang Show), you might be wondering if Chang has time to cook these days. But we can say for certain that he makes room in his schedule to test three recipes a week for Recipe Club, a podcast that he co-hosts with friend and producer Chris Ying. The premise involves a random ingredient or food — think Spam, chicken parm, eggplant — for which Chang, Ying, and one of a handful of regular guest chefs must suggest a recipe. They then test each other’s recipes and describe their experiences on the show (spoiler: there are many disasters) before voting for their favorite recipe of the week. Originally a segment on his other podcast, Recipe Club proved so popular that it spawned its own show, complete with an active (and very opinionated) Facebook group.

Each episode of The Sporkful begins by reminding us of the show’s purpose: obsessing about food to learn more about people. Most food podcasts embody a similar aim — after all, what else is there to discuss without an opportunity to taste? But founder and host Dan Pashman has flipped this trope on its head, getting to the heart of a person through the food they enjoy, rather than the other way around.

Like many good meals, simplicity is key. The Sporkful strips food journalism back to its essence, asking “What do people eat and why?” By moving beyond a studio setting, the show is a great example of how to do interview podcasts that resist sounding static. If you can buy into a man weeping about pasta shapes, The Sporkful is a show you’ll find easy to love, and one that  illustrates the diversity of American food culture with both humor and heart.

Hosted by Samin Nostrat (Salt Fat Acid Heat) and Hrishikesh Hirway (Song Exploder), Home Cooking is a traditional question-and-answer podcast that celebrates the trials and triumphs of cooking in your own kitchen. To stave off lockdown boredom, the pair invited listeners to phone with in their culinary questions, from the practical (“Should I soak beans?”) to the absurd (“Can I make a birthday cake with whole wheat flour?”) Although the mini-series has come to an end — we’re hopeful it might be revived like last night’s pizza — Home Cooking now provides the perfect binge listen. The show is a snapshot into a difficult year that makes the very best out of a few ingredients: talented hosts, zealous listeners, and way too much spare time.

Challah. Latkes. Matzah ball soup. Jewish food is more than just its most famous dishes. It’s a rich and thriving cuisine that, like so many food traditions, is an integral part of American life. Schmaltzy celebrates all things delicious in Jewish cooking, discussing not only food but the diverse cultural experiences shaped by it. Notable guests include Alison Roman and Maira Kalman, who each shape their stories around the meals they most love to cook and to eat. Needless to say, you don’t need to be of the faith to enjoy Schmaltzy. At its core, the show is about storytelling; each episode is packed with laughs, nostalgia, and delectable anecdotes.

Comedian Dan Ahdoot believes in the old phrase “you are what you eat,” but his interpretation isn’t what you’d expect. Dan has a novel technique for breaking the ice with his guests: he asks them to send him photographs of the inside of their fridges, revealing tastes for unexpectedly pedestrian ingredients — and just a little bit of caviar. Would you expect anything less from a celebrity chef? Although we still can’t taste the food, these photographs give us a visual flavor of Dan’s famous guests, including renowned chefs and food writers such as Padma Lakshmi and Jaques Pépin. Green Eggs and Dan achieves excellent pacing through rapid questions, bringing out the best of a chef’s “rock star” personality. If you can tolerate his sycophantic hosting style, there are four seasons of Green Eggs and Dan to satisfy your appetite.

The first season of Yoh Yi Jun’s podcast caught the attention of Vanity Fair and Nat Geo for a reason. Take a Bao tells Asian food stories. Jun is a Malaysian food blogger and a regular contributor to Taste. Both his podcast and blog, Jun & Tonic, have a consistent aesthetic: sleek and vibrant. But where his photography is notably minimal, his recipes are ambitious. Think wine jellies, matcha Neopolitan cookies, kimchi carbonara… you will want to take a bite out of your screen. His podcast, Take a Bao, is just as mouthwatering. It explores topics such as the origins of rendang (“It’s not curry, it’s rendang!”) and the zen in every cup of tea, with episode highlights including a story about the disappearing coffee houses of Malaysia.

After her stint on MasterChef, Tanorria Askew started Black Girls Eating with co-host Candace Boyd (FoodLoveTog) to have conversations about Black culture’s contribution to the food we all enjoy. Their show makes this list of the best food podcasts because it combines social justice issues with a hosting style at once irreverent and informative. Askew and Boyd haven’t just pulled up a seat. They’ve built their own table. A bi-monthly conversation, Black Girls Eating is all about “justice, Black Girl Magic and well-seasoned food,” but it’s also about Askew and Boyd’s friendship. Their ease and humor make for easy listening, a sign that this show will go far.

From the San Francisco Chronicle, the Extra Spicy podcast features a medley of ideas, stories, and current affairs. Hosted by restaurant critic Soleil Ho, the show reflects the best of “magazine-style” podcasting by leaping between topics without sacrificing intrigue or nuance. The show’s goal is to “stimulate your mind and your appetite” by analyzing bizarre food trends, diet culture, and angry celebrity chefs. Ho is an excellent guide, offering up the perfect blend of local Bay Area culture and stories from around the world.

On Dish City, hosts Ruth Tam and Patrick Fort dive into the thriving food culture of Washington, D.C., Maryland, and Virginia, sampling dishes and hearing stories. Just because you can’t take a bite doesn’t stop this podcast from being mouthwatering. The latest season of Dish City focuses on DC and explores important issues such as gentrification, cultural heritage, and secret seasonings. The show is a cult favorite among foodies and podcast fans alike, but you certainly don’t need to be a local to take something away from this show. Exploring the capital with Tam and Fort feels like a day out with new friends, making for great listening during a commute.