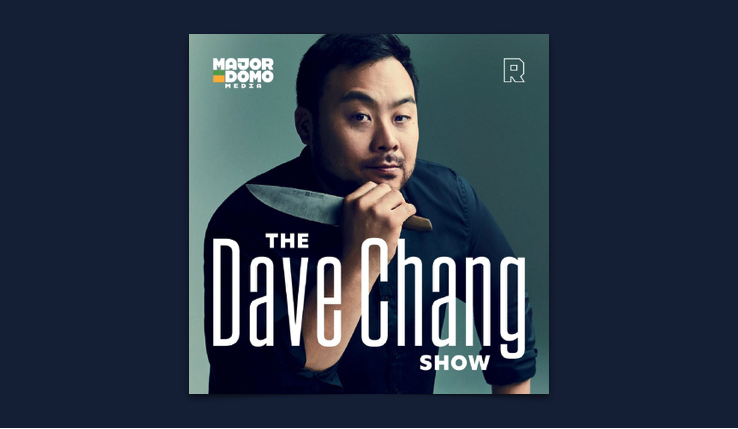 Chefs are the new rock stars. Or at least, that’s been the line for the last few years. You could be convinced of this statement’s truth by listening to The Dave Chang Show, a podcast from the Momofuku group mastermind.

Podcasts were once the “wild west” of broadcasting. Democratic and idealistic in theory, it was a medium open to anyone with a microphone and internet connection. Perhaps that’s looking back at the early days with rose-tinted glasses, but there is no denying the difference between podcasting’s punk origins and today’s deluge of glossy, celebrity-driven productions.

In a Time Magazine article written in 2010, David Chang was lumped in with Jamie Oliver and Ferran Adrià as exemplifying the “cult of the celebrity chef.” The rise of the superstar chef risks sanitizing the food industry, or so the argument went. Indeed, the question of remaining authentic in the face of fame is a topic that occupies Chang’s mind in almost every episode of his show. As part of The Ringer podcast network, The Dave Chang Show is certainly not an “indie” production. And yet, as with his Momofuku restaurants, the rock ‘n’ roll endures.

For a show that predominantly features discussions of food — cooking it, eating it, throwing it on the kitchen floor in frustration — The Dave Chang Show dedicates considerable time to political dialogue, particularly the impact of racism in the industry. In the same episode, the show sustains difficult conversations about systemic cultural appropriation alongside segments mocking “teflon wok,” balancing high and low brow topics without ever coming off contrived.

The show captures some of the uncooked conversation and raw opinion that characterize many popular, “unfiltered” podcasts, minus the blatant bigotry. Topics oscillate from the current Covid-19 crisis and Black Lives Matter protests, to small rebellions within the food scene (in one episode, Chang proclaims that he was first chef in New York to do onsen tamago in ramen, a point entirely irrelevant for anyone out of the loop). This combination of macro and micro issues is what gives the show grit and variety.

Podcasting, like professional cooking, rewards innovation within reason. While Chang is prone to changing formats from episode to episode, he knows to keep the popular items on the board. Episodes like “Too Small to Fail” and “Our Own Worst Critics” operate as multi-course features, held up by newer concepts like “Bad Movie Club.”

The regular change of topic mirrors his variety of guests, most of whom are heavyweights in the restaurant industry. Chefs featured on the show include Wylie Dufrese, René Rendzepi, and Sean Brock. At times, the podcast can feel a bit like a boy’s club. But for all the bombastic, macho chef talk, Chang openly expresses his feelings of mediocrity, an imposter complex newly compounded by the success of his Netflix shows Ugly Delicious and Breakfast, Lunch, Dinner.

Anthony Bourdain regularly spoke about how disorienting it was to blend his “bad boy” reputation, well-suited to the lively kitchen environment, with the staged scenes and constant retakes required of fronting a show on the Food Network. A close friend of Bourdain, Chang is similarly distressed by issues of legitimacy and identity. It is this modesty that breathes humanity into the show, making it a pleasure for the occasional diner and hard-core foodies alike.