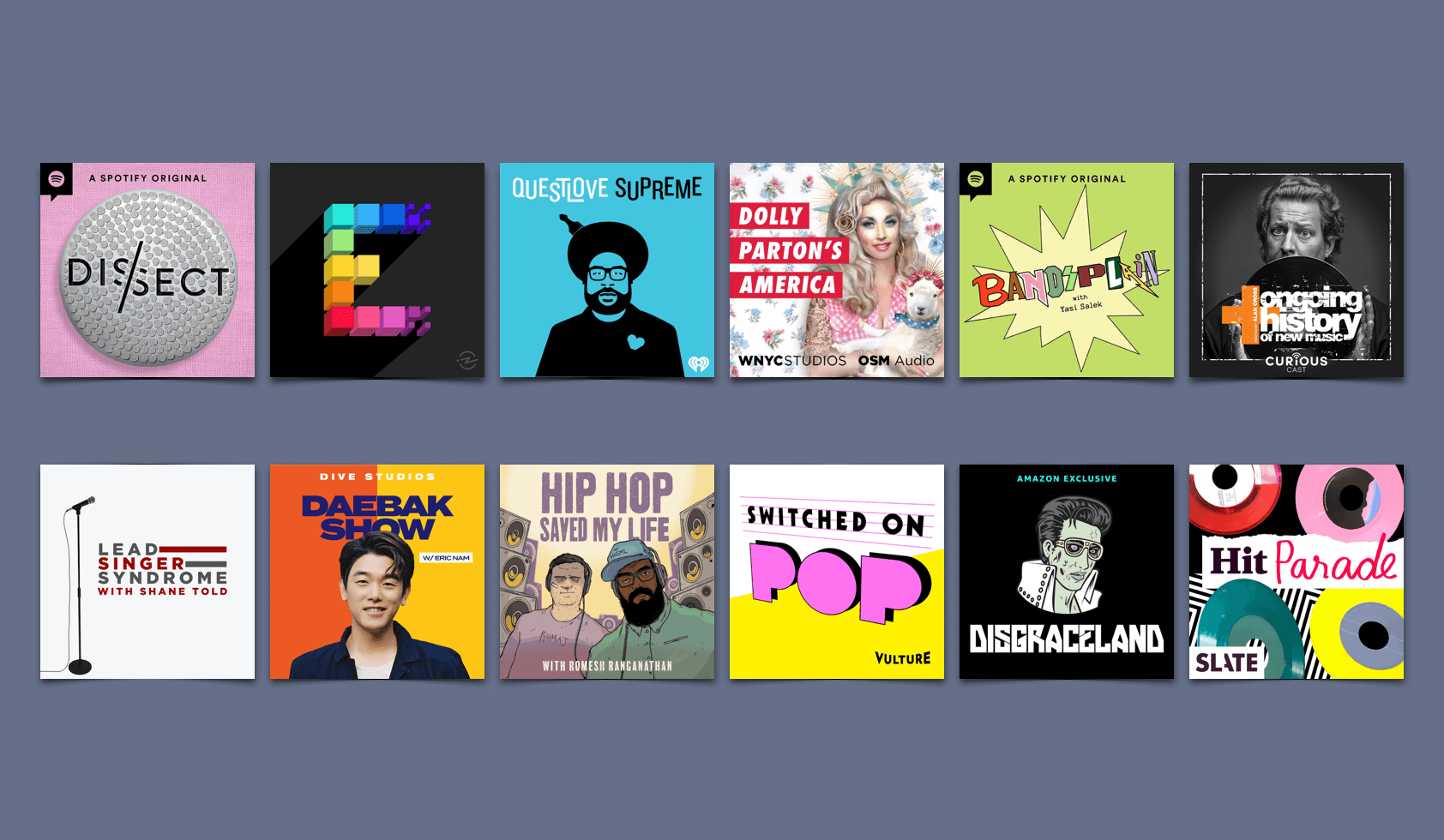 There aren’t many things we can confidently say are universal. Not even being obsessed with Keanu Reeves. Music might be one of the only things that most people, no matter their background, feel connected to — and yet, music is also deeply personal. We will always squabble about which genres are superior, which artists are nothing but talentless wannabes. We even disagree about which critics to trust, with some hanging on Pitchfork‘s every word (or 0 to 10 rating), while others find them to be pretentious snobs. With all these conflicting opinions, it can be hard to see music as something that unifies us… but think of it this way: if music wasn’t integral to so many of our lives, nobody would bother arguing about it.

Podcasts are a natural platform for these passionate conversations, harmonizing song and debate in a medium that hasn’t been seen since, well, radio. Most of the best music podcasts have experience on their side, their hosts and producers boasting several projects under their belt. Ultimately, the shows on this list accomplish one of two things: they bring you closer to your favorite music or help you discover something new. Most of these music podcasts, I’m pleased to say, do both.

Behind every song is a story. That’s the premise of Song Exploder, one of the most popular and highly regarded music podcasts out there. And for good reason. Song Exploder captivates you with the stories behind hit singles and deep cuts alike in the artists’ own words, a simple idea that has proven so effective, it’s become a Netflix show.

Song Exploder is the brainchild of Hrishikesh Hirway, the talented host and producer behind other hit podcasts including The West Wing Weekly and Home Cooking. Despite being a musician himself, Hirway never takes center stage in his projects; rather, his signature editing style means that his presence is all but removed from the show. This technique allows for smooth, atmospheric storytelling with genuine multi-genre appeal. Whether you want to dive deep into your favorite song, or learn to appreciate a new artist, a jump into the show’s extensive archive is a rewarding experience.

From Kanye West’s Yeezus to Blonde by Frank Ocean, Dissect is a podcast that analyzes some of the most important albums of our day. Host Cole Cuchna performs his extensive research though a simple format of one album per season, one song per episode. To “dissect” your favorite record is an act of love, but considering the word also means to “methodically cut something up in order to understand its internal parts,” you can’t deny the morbid connotations. There’s fine line between celebrating something and tearing it apart, but Dissect‘s approach to musical analysis allows these albums to expand beyond their original meaning.

Questlove and his Team Supreme are natural storytellers. With the help of music legends and “legends in the making,” this is a weekly show for listeners who seek long episodes and cheeky conversations, its guests including household names like Jack White, John Legend, and Snoop Dogg. As well as being the drummer of The Roots, Questlove can add excellent podcast host to his resume. His lively, natural style fosters an atmosphere that allows others to open up and express themselves. Morning, noon, or night, this is an often candid and always interesting music podcast that will reward fans of evening talk radio.

Original ideas can be hard to come by, especially in podcasting. So how’s this for a hook: a music podcast that’s all about true crime. If you’re skeptical, be assured that Disgraceland is no gimmick. This long-running podcast has an extensive archive and numerous awards to prove its bona fides, not to mention an episode list with titles too good not to be click-bait. Dear listener, they’re not. Host Jake Brennan is sincere when he promises the most unbelievable stories about our favorite artists. Jennifer Hudson and a triple homicide. Taylor Swift’s stalkers. Ringo Starr and the Mexican Federales. You’ve got to hear these stories to believe them.

Brennan’s scripts are tightly composed, his delivery laugh-out-loud funny. Is he the Raymond Chandler of podcasting? I can’t see a better contender. Accompanied by pacy background music and top-notch editing, this is a show that sounds best coming through your headphones on your daily commute. Its irresistible rhythm and engaging storytelling make it one of the best-hidden gems in podcasting.

Widely considered one of 2019’s best podcasts, Dolly Parton’s America’s success lies in its overthinking. Not many of us, other than the diehard Dolly fans, thought too deeply about the country singer’s long and colorful career. Few personalities can convincingly warrant an entire podcast about their life, but Parton’s music, personal life and politics make for fascinating listening. Written and hosted by Radiolab’s Jad Abumrad, the show tells its story with masterful empathy and nuance. Coupled with an iconic soundtrack, there is little to fault in this ten-episode series.

In his review of the show, Nic Dobija-Nootens praised Abumrad’s weaving of his own personal history into Parton’s life, demonstrating how the parasocial relationships we develop with our musical idols can have a positive influence. Shows like Dolly Parton’s America are becoming increasingly common in the audio space, so if you’ve already enjoyed the series, give Anything For Selena a listen.

The music industry might be filled with pomp and glitter, but Ongoing History of New Music charts its progress with clarity, simplicity and great editing. Host Alan Cross covers all genres in his open-ended study of an industry that ranges from the birth of hip-hop to movie theme songs. Cross makes connections that most would typically overlook, yet these topics prove to be unexpectedly relevant, such as his two-part episode on the politics of music streaming. If you’re a fan of podcasts like Philosophize This!, this show may well become a staple of your feed.

For those who aren’t in the know, daeback means “that’s awesome” in Korean. It’s a phrase often used by characters on K-dramas and conveniently sums up the general feeling surrounding K-Pop’s ascension into the American mainstream. It was only a matter of time before the music phenomenon led by groups like BTS broke into the world of podcasting, too.

Enter Daeback Show w/ Eric Nam, a show that’s made for fans of the genre and pretty much nobody else. But despite its specificity, the show maintains a buoyant energy even after a hundred episodes. Born and raised in Atlanta, Nam is the perfect host for a bilingual podcast with huge appeal for diehard K-Pop fans, accustomed as they are with their idols switching between English and Korean in their music. With a smooth voice and charming energy, “podcast host” seems the obvious path for Nam’s career. No doubt, this won’t be the last we see of him.

Never understood the appeal of Metallica? What about Radiohead? Tell me I’m not the only one who wonders about the popularity of Kate Bush. Not content with our ignorance, Bandsplain is here to tell us why those cult artists and iconic bands are set to go down in history — and they’ve curated an essential playlist for each episode, just to make sure we get it.

Host Yasi Salek invites a circle of experts onto each episode to argue their case. And for the most part, I’m totally convinced. Part of The Ringer’s growing podcast network, Bandsplain is a music and talk show hybrid that makes the most of being a Spotify exclusive by studding each three-hour episode with track after track of great music. Their crusade might be pedantic, but we should admire this show as a worthy alternative to traditional FM broadcasting.

English comedian Romesh Ranganathan is a household name in Britain, but he’s yet to break out in the US. Perhaps his podcast Hip Hop Saved My Life will be the project that crosses the pond, as it’s clear that American rap and hip-hop have had a significant influence on his life. In conversation with artists, musicians and other personalities, Ranganathan discusses how the music that came from the streets of inner-city American impacted people from all walks of life. A funny, verbose show that may not be everyone’s cup of tea, Hip Hop Saved My Life reminds us that music knows no borders.

Ever wondered what made ABBA a global phenomenon? Perhaps you ponder the sudden rise in lyrical lawsuits associated with Gen Z artists? These are the types of questions that occupy the minds behind Switched On Pop, a colorful pop music podcast from Vox and New York Magazine. Hosted by songwriter Charlie Harding and musicologist Nate Sloan, there’s no better duo to break down the trends happening in popular music. But what makes their conversational style truly compelling is the way Harding and Sloan take clips from songs and break down their technical details, before working out how these catchy hooks influenced other areas of music. Only Switched On Pop has convincingly compared the lyrics of ABBA’s “Dancing Queen” to those of BTS and Troye Sivan, making it ideal entertainment for those looking to spice up lackluster dinner parties with pop music facts.

With Gen Z busy reinventing pop-punk for a new generation, some of us are sticking to the rock-metal classics of the 90s and 2000s. Bands such as Slipknot, Taking Back Sunday and My Chemical Romance are as relevant to their cult fans they were two decades ago and the stories from their touring days are ageing like fine wine. Lead Singer Syndrome celebrates this legacy through unfiltered interviews and fresh music drops that depart from the stifling conventions of some music podcasts.

Shane Told, the show’s host, knows a thing or two about lead singer syndrome. After spending twenty years as the frontman for Silverstein, he’s loaded with tales from the road. His conversations with notable band members unpack the energy and egotism of the contemporary rock music scene, and with almost four hundred episodes in the archive, it’s clear that rock is a genre that’s still wildly popular.

Hit Parade is a show that goes coast-to-coast and genre-to-genre to ask what makes a good song really sing. With a delightful dose of deadpan humor and the usual high-quality production we can expect from a Slate podcast, Hit Parade reflects on current affairs as an anchor to its bi-monthly trips down music’s memory lane.

Take the episode on country star Garth Brook’s hit “Friends in Low Places.” This chart-topping single wasn’t a fluke, with genre experimentation and playtime on mainstream radio stations contributing to his success. It’s a pattern we see in America’s current embrace of K-Pop, over twenty years later. Ultimately, a song takes more than just talent, luck or timing to make it a smash hit, but what makes Hit Parade a smash podcast is simple. The show is producing the music content you didn’t know you wanted, with a production value that other podcasts forget is needed.