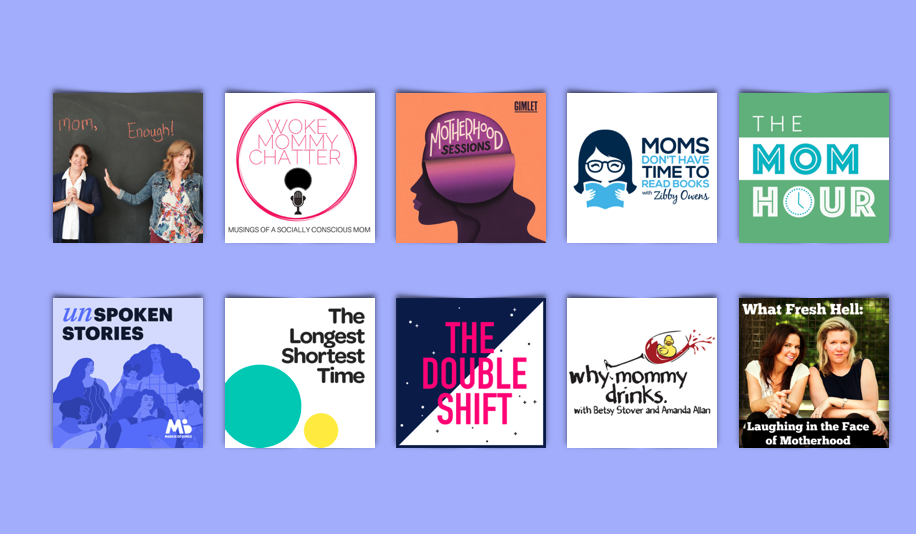 There’s no right way to navigate the impossible expectations, outdated patriarchal norms, and exhausting horror and joy of conceiving, birthing, and raising children. However you figure it all out (or fail to some days), you’ll need to reach out for help. You’ll need someone to tell you you’re not crazy and that you’re definitely not alone. Sure, sometimes the following podcasts talk about tantrums and potty training, but they understand that motherhood is also about politics and sex, friendship and creativity, money and mental health. They offer a range of advice and solidarity, beautifully told stories and honest conversations, voices for the darkest moments and friendly, funny companions in the day-to-day chaos. Here are the ten best podcasts for moms.

The Longest Shortest Time started in 2010, after host Hillary Frank’s pitches to tell stories centered on mothers were rejected by public radio stations as too niche, too personal, and too intimate. Frank began making the show in her closet, and it’s gone on to become the podcast that defined its genre. The show correctly insists that stories about parenting can make for good stories, period. There’s no taboo they haven’t tackled, from post-partum sex to the difficulty of getting doctors to take birth injuries seriously. After over 200 episodes, the podcast ended its run late last year, but the back catalog is a treasure trove of truth, support, myth-busting, community, and incredible stories.

Check out The Parents’ Guide to Doing It, the It’s A Real Mother series of episodes, and Healing After Childbirth. Then binge the whole catalog while you do another lap around the block with your baby or drive your teenager to another edifying after-school activity.

Every story The Double Shift tells is about questioning the way things really are for working mothers and working to change them to the way they should be. Host Katherine Goldstein is an award-winning journalist, and each episode is seamlessly produced and thoroughly reported. Goldstein injects just the right amount of her own experience into the show, while acknowledging that the questions she raises about sex, work, politics, and relationships will have different answers for everyone.

On Gimlet’s Motherhood Sessions, one of the newest podcasts for moms, reproductive psychiatrist Dr. Alexandra Sacks lets us listen in on her conversations with mothers as they reveal their most intimate struggles. Whether she’s talking with a mother who rethinks her entire childhood as an adopted daughter or with the mother who must figure out a way to co-parent with an alcoholic ex, Sacks listens and responds with compassion and insight.

These are the conversations we’re afraid to have with even our closest friends, the truths we never dare to say out loud, and the fears we bury deep, but something miraculous happens when these women are allowed the space to tell these stories. Every episode features a moment when you can hear a mother sigh out a breath they’ve been holding, when you can feel her load lightening a little after sharing her secrets. Even if your own struggles seem different on the surface, there’s such power and strength to take with you and apply to whatever secrets and fears you’re holding onto yourself.

When I first listened to this podcast, I had no idea that host Zibby Owens was the daughter of billionaire Stephen Schwartzman and a huge literary-world influencer. Owens is also a mom of four, and a great interviewer who can get authors to realize something new about their work and its place in the world. Listening to this podcast feels like spending some time with a thoughtful, Ivy-league educated-yet-unpretentious, Platonic-ideal mom book club that will never exist in real life, because in real life your neighbor Susan always comes and talks about her in-laws the whole time.

Owens asks questions about the intersections of motherhood and creativity, and about how the demands of motherhood both inform and inhibit writers’ work. Moms Don’t Have Time to Read Books earned its place in my regular rotation from just a few minutes into recent episodes with Michelle Filgate, editor of What My Mother and I Don’t Talk About, and with Danielle Ganek, author of The Summer We Read Gatsby. I can’t wait to dive into the back catalog full of big names from Rebecca Makkai to Celeste Ng.

I love the interviews on Woke Mommy Chatter, where Black moms tell stories of everything from making mom friends to keeping their kids safe with such candor and honesty. Host Tanya Hayles has curated a list of guests who cover topics including homeschooling, mental health, Trump, Black aunties, and single mothering. If you’ve ever fantasized about leaving everything behind to travel the world with your kids, the episode with Aja Rutledge on moving to Mexico with her son the day after Donald Trump was elected is a great way to imagine if you could really do it. If you’ve ever felt like combining corporate life and motherhood was killing you, Brianne DeRosa’s episode on leaning out will resonate.

Hosts Amy Wilson and Margaret Ables have experience doing big projects in theater and TV, and I think that’s why this show is better than so many other moms-talking-to-each-other podcasts. There’s just enough structure and research in each episode to back up the personal stories, and even those on topics that might seem lighter almost always arrive at a bigger, smarter, more important conversation. I get annoyed when wry asides start to sound too much like if-moms-were-obnoxious-morning-DJs, but the humor on this podcast never does that.

One episode I listened to on having people over and entertaining started with a discussion of potlucks but pushed further and led to a conversation about our parents’ generation, their expectations vs. ours, and perfectionism and its pitfalls.

Why Mommy Drinks can swing in one episode from feeling more freewheeling and light into telling the trickier, longer version of parenting stories. It’s the most loosely structured of any of the two-moms-talking podcasts I like, but their interviews with comedians, actors, and writers who are parents lead to some fun and very real conversations about everything from postpartum bodies to sibling rivalry.

This podcast is like the friend you go to Vegas with to dance on a couple of tables, but whom you also talk with about your deepest worries in a very fancy Vegas bathroom. As my favorite song from Daniel Tiger’s Neighborhood reminds us, you can be more than one thing, and Why Mommy Drinks pulls that off in a way I don’t entirely understand.

This podcast, sponsored by the March of Dimes and hosted by actress and mother Tatyana Ali, tells stories of pregnancy, birth, and loss, focusing on the gaps between expectations and reality. The show is edited so that the subject tells their own story straight through, while Ali’s voice occasionally interjects to guide listeners through the hardest parts.

The 64 Days in the NICU episode will resonate with anyone who’s been through the uncertainty of that in-between, unexpected place. Another episode with actress Jamie-Lynn Sigler tells her story of pregnancy and mothering with MS, and she talks about the ways keeping her illness a secret for so many years almost broke her.

This is another two-moms-talking show where even topics that seem mommy-bloggy on the surface always lead to more meaningful discussions. Host Meagan Francis lives in Michigan, while Sarah Powers is based in Southern California. As a mom who’s lived in both big cities and Midwest towns, I always appreciate when parenting discussions, in print or podcast form, acknowledge the particular challenges of parenting in different places. The wildly different cultures and costs of living in different parts of the country absolutely affect every important discussion any honest mom show takes on, even when that’s not stated in every episode explicitly.

I loved the episode “Worth the Wait: One Mom’s Infertility Story with KC Clifford,” where KC tells her story with a songwriter’s heart and attention to detail. The Mom Hour also does “More Than Mom” episodes, and a recent one on “The Lives We Didn’t Live,” where the hosts re-invent their early careers and college majors, had me fantasizing about my own alternate reality and roads not taken.

Many shows about motherhood feature experts as guests, but Mom Enough is hosted by a mother-daughter team of experts. Erin Erickson is a nurse practitioner with a Master’s in Public Health, and her mother Marti Erickson holds a PhD and is a world-renowned expert in child development and children’s mental health. They attract guests who are also leaders in their fields, and the show has a real vision and consistent theme as a place to find research-based ways of confronting the hardest aspects of motherhood.

One episode, “Helping Children Deal with a Family Member’s Substance Abuse,” features Helene Photias from the Hazleden Betty Ford Foundation. Photias’s approach to explaining the unexplainable was so compassionate and kid-focused, steeped deeply in scholarly research but easy for any caring adult to implement. If you’ve got a particular difficult issue you’re facing in your family, it’s likely Mom Enough’s back catalog has an episode to help you through it.