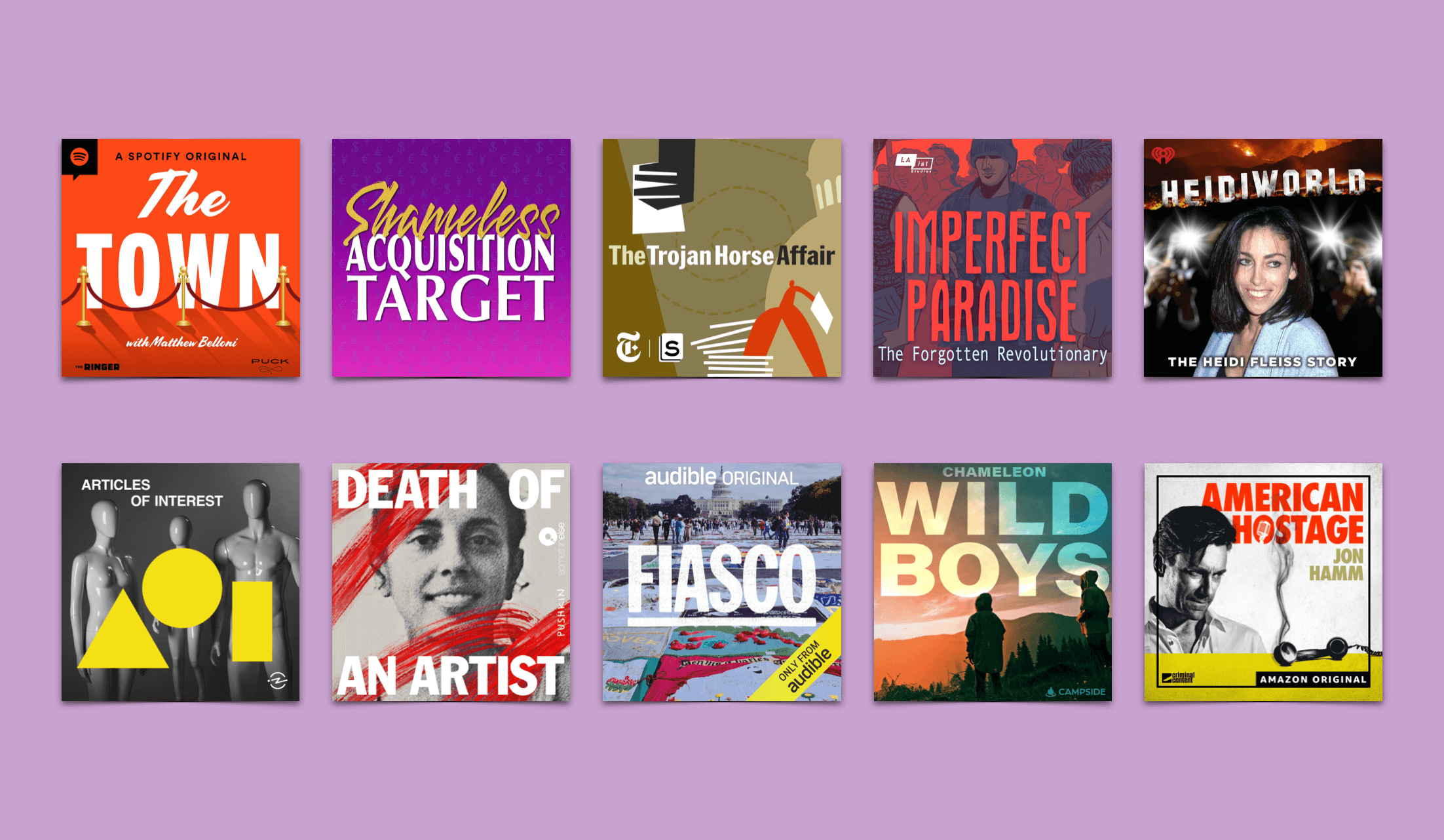 As chosen by Podcast Review’s staff, here are the ten best podcasts of 2022:

The streaming era is upon us, and yet the companies helping us ditch our cable boxes aren’t in great shape. This phenomenon and other Hollywood stories are covered in insider tones on The Town, Puck journalist Matthew Belloni’s show which debuted this year from The Ringer. The joys of The Town can be found in Belloni’s well-worn expertise, his dishy way of speaking, and his lighthearted banter with producer Craig Horlbeck. Whether you’re a showbiz veteran or looking to learn about the business of TV and film for the first time, The Town is the podcast for you. – Jack Conway

Wild Boys is the story of two young men who appear in the small lakeside town of Vernon, British Columbia with nothing more than their backpacks, claiming to be the estranged children of off-the-grid survivalists. The community mostly welcomes the Green brothers, even as cracks begin to show in their story. Hosted by journalist Sam Mullins, the series is a compelling narrative about the deep connection between two siblings who will do anything for one another. – Wendy J. Fox

American Hostage fell under many people’s radar. Fiction podcasts often do. Unfortunate, considering that the story of shotgun-wielding Tony Kiritsis and radio veteran Fred Heckman was the best crime series to debut in 2022. Directed by Shawn Christensen, this psychological thriller tells the infamous true story of a hostage situation in Indianapolis involving a radio show, a mortgage executive, and a criminal who can’t stop cursing live on air. John Hamm brings the star power to this engrossing eight-episode series, supported by a strong cast and masterful sound design. The jokes can be eye-rollingly bad, but what do you expect from a 1977 hostage negotiation? American Hostage raises the bar for fiction podcasts. Let’s hope 2023 delivers further. – Alice Florence Orr

Host and producer Avery Trufelman has proved time and again that just about everything has an interesting story behind it. Season three of Articles of Interest, “American Ivy,” is no exception. Over seven episodes, the show traces the winding and unexpectedly rich history of the distinctly American “Ivy” style, inspired by Ivy League students. Along the way, Trufelman explores the idea of trends — what they are and what generates them — in an attempt to figure out why Ivy style has persisted for so long. Trufelman’s zeal for her chosen topic (in this case, khakis and sweater vests) is, as always, contagious. – Kat Rooney

Oscar Gomez was a rising leader in the California Chicano student rights movement with a popular radio program until he was found dead in 1994. In The Forgotten Revolutionary, host Adolfo Guzman-Lopez brings Gomez’s story to light while Guzman-Lopez explores his own relationship to activism as a journalist with a significant platform. Part history and part memoir, this podcast tells a complicated story with incredible empathy. – Wendy J. Fox

5. Death of an Artist

In Death of An Artist, host Helen Molesworth revisits the tragic death of Cuban-American artist Ana Mendieta. Molesworth, an art-world veteran and curator of contemporary art, recounts what we know about Mendieta’s brief, turbulent relationship with American minimalist sculptor Carl Andre, including the evidence that strongly suggests Andre killed Mendieta (even though he was acquitted). Listening to Molesworth carefully describe Mendieta’s radical art, her promising career, and the art world’s chilly silence following her death makes clear that the story touches a nerve for her. Molesworth has dedicated her life to elevating exceptional artists, and she doesn’t want her peers to get away with erasing Mendieta and her oeuvre from art history. With its rich visual descriptions and nuanced social analysis, Death of An Artist is an elegantly-told and emotionally-compelling listen. – Kat Rooney

The most audacious series of the year finds audio veteran Laura Mayer lifting the veil on podcast financing while trying to sell the show itself. As of writing, the long-awaited season finale, which will reveal whether or not the show has been sold, is yet unreleased, meaning that any reader of this blurb could make an offer. The series is wild start-to-finish, and does an excellent job laying out how the business of podcasting drives what gets made and not made. Mayer’s circus aims to inspire young podcasters to create, and to fund her own dream projects to come. – Jake Greenberg

“I wasn’t expecting easy parallels,” Leon Neyfakh explains in the first episode of Fiasco: The AIDS Crisis. “I just wanted to know how it felt to live through it… and what it had to tell us about the thing we’ve all been living through lately.” With those words, Neyfakh gets at part of what has made Fiasco (and the early seasons of Slow Burn) so successful: their ability to remind listeners that like today’s uncertainties, the outcomes of history were never a foregone conclusion. In this season we hear about the fear and confusion that arose when unusual medical symptoms suddenly started appearing in patients in the early 1980s. We also hear about the reactions of people who are still shaping our politics, like Senator Dianne Feinstein. Once again, the Fiasco team shows through their steady storytelling that when we zoom in on the past, the present comes into focus. – Kevin Chang Barnum

HeidiWorld, a winding history of Heidi Fleiss and LA, brings a sophisticated perspective to seedy behavior. Molly Lambert, along with a chorus of voice actors, develops a sympathetic and tragic picture of Fleiss, coaxing her out of the shadows of cultural memory. Lambert places Fleiss’s celebrity within the politics and media of the recent past, where she reveals the extent of American puritanism and the national appetite for public humiliation. In an era of personal brands and side hustles, where sex work is more prevalent than ever yet just as criminalized, the legacy of Fleiss stands tall like a billboard on Hollywood Boulevard, promising and warning that everything has a price. – Christian Prince

What begins as a linear investigation into the authorship of a letter becomes an inquiry into disparate approaches to reporting. The latest from S-Town’s Brian Reed was the brainchild of Hamza Syed, the doctor-turned-journalist determined to find out who penned the letter that targeted a group of predominantly Muslim public schools and incited a shift across the UK in education policy. The interplay between Reed and Syed — usually playful, occasionally tense — is the show’s motor, driving the series forward even when the search for definitive proof dries up. – Jake Greenberg

Want the week’s best podcast episodes in your inbox? Join 10,000+ subscribers and sign up for our weekly newsletter.