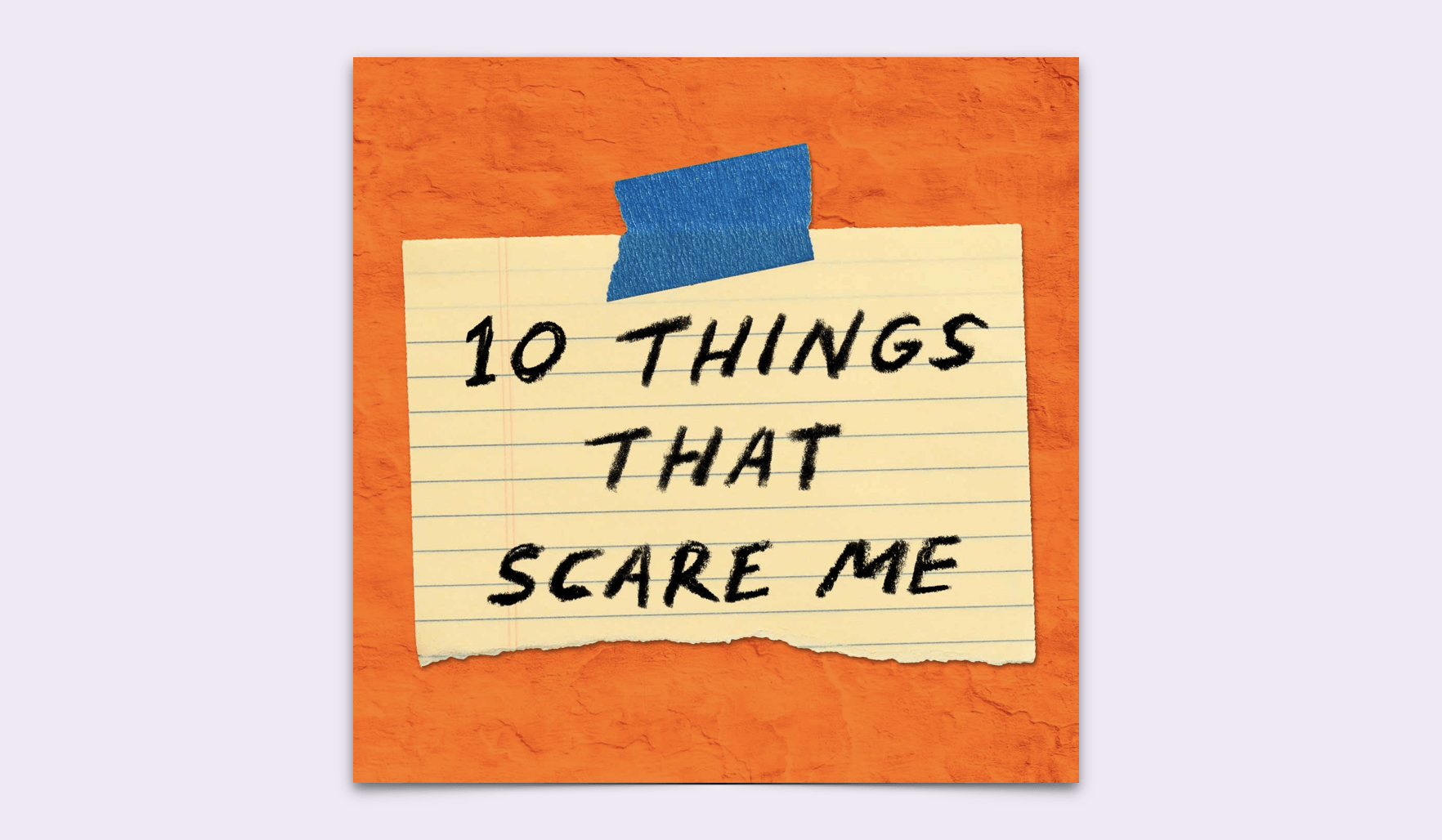 10Things That Scare Me, an aural listicle, without a host, is challenging the norms of podcasting. Each episode features one person who discusses exactly what the title suggests. Sometimes the speakers elaborate on their fears and at other times we’re left with just an idea: embarrassment, loneliness, expensive pillows. One episode will feature a household name like YA novelist John Green and the next will spotlight a Texas alpaca farmer. Without a host, attention is centered unwaveringly on the speaker, while delicate audio mixing and rigorous editing replace the narrator as the storyline’s drivers. All this is accomplished in eight minutes or less.

Stripped of the elements that have popularized podcasting – the long-form narrative, the musical score, and the friendly host – 10 Things presents stories in their most essential forms. The tactic is risky, and it is yielding impressive results.

10 Things launched in early December with an episode featuring Anthony Scaramucci, the Trump spokesman who lasted all of ten days. Scaramucci’s seventh fear, “returning to Washington,” swiftly gave 10 Things media buzz. As entertaining as that moment is, the rest of the episode is far more intriguing. Scaramucci in 10 Things is unrecognizable from the man who called up a New Yorker reporter at night to say of himself, “I’m not Steve Bannon, I’m not trying to suck my own cock.” Here, Scaramucci opens up about his fear of losing his family members and his fear that someone he loves will fall out of love with him. In seven minutes, Scaramucci becomes simply a person with a handful of fears that belong to us all.

These common fears, the ones that transcend our politics, religious beliefs, and ethnicities, are put on striking display in 10 Things. Of the 28 people who have been interviewed 19 are afraid of death in one form or another. Other popular fears are climate change, professional failure, harm befalling a loved one, and snakes. Then there are terrors that offer clues about a person’s identity. Samin Nosrat, the host of Netflix’s Salt, Fat, Acid, Heat, describes an incident shortly after 9/11 when she got a flat tire. Her mechanic asked about the design on her necklace, which listed the names of the five prophets of Islam. She remembers the man saying to her, “You gotta put that away. You got to be careful. It’s not safe to look like you look anymore.”

Other fears are just quirky: “being asked my opinion of a friend’s work I didn’t like,” a zombie apocalypse, balloons and living without an Xbox. Odd as these terrors may seem, I’ve never failed to sympathize with the guests’ fears after they have unpacked them. For example, Starlee Kine, the creator of Gimlet’s Mystery Show, lists the Apple Store. Admittedly, her explanation remains amusing for a bit. When Kine passes the Apple Store at night, she sees a cue of iPhones lit up and charging against the dark void of the closed store. They look like “an army of dicks,” she explains. But then you start to get her point. These machines, these mini remote controls to our lives, have the ominous ability to never sleep, provided they have access to an outlet. They’re always watching.

“When you think about fear it sounds daunting,” said Paula Szuchman, the executive producer of 10 Things. “But when you go a bit deeper, it can get at the root of who we are, why we do things and what’s motivating us.” These revelatory moments are a feature of every 10 Things episode – and are rather extraordinary. It takes guts to admit your fears to yourself, let alone to explain your vulnerabilities in detail on a podcast. Yet three times a week, guests give us – a faceless crowd of headphones – the privilege of peering into their psyches. They endow us with a kind of trust that transcends the intimacy of most audio and of many real-life relationships.

Equally impressive are the technical limits the crew has set for themselves. The absence of a host is the most striking departure from the podcast form. “Common wisdom in audio – and I think it’s true – is that you really bond with the host of the show and form this deep connection with them,” said Szuchman. So why cut out the host? It takes the listener a step closer to the guest. Instead of feeling like you’re in a quiet room with an interviewer and interviewee, the editing allows the listener to imagine that he is the one asking the questions. But the format also means the podcast does not have a central character that coaxes the listener to come back. There is a raspy female voice that chimes in at the end of the show to read credits, but her identity remains anonymous. As a result, the producers have to make the listeners feel like each new guest is their friend. Because the show’s topic is inherently private, the podcast actually executes this quite well.

The guests do not introduce themselves. Rather, they dive headfirst into the list, with the occasional prelude of “Okay, ready?” If you didn’t read the title of the episode, you wouldn’t know who the voice in your ear was until you reached the end. The speaker’s identity is only revealed with the tagline, “I’m so-and-so and these are 10 things that scare me.” For this reason, I recommend you hit shuffle on the show instead of browsing by title. That way, your mind is released from information like the guests’ job titles and appearances; you are challenged to truly hear.

The 10 Things formula has been successful thus far, but it’s easy to see how this format might quickly tire. In response, the producers have a diverse line-up of upcoming guests – a former marine, a forensic psychologist, a midwife, a retired secret service agent, a reverend, and a person who helps with assisted suicide. And they’re tossing around ideas like having couples list their fears together. But the producers will have to go bigger to keep the podcast interesting. In the future, I’d like to see them intersperse regular episodes with an occasional long-form installment. They might map the cultural history of a specific fear. They could dissect the lasting effects of moments of societal dread, like the “war on terror.” They could interview sociologists about fear trends, or talk to psychiatrists about how they treat fear. But for now, the show, a mere seven weeks old, consistently packs an emotional punch with its universal subject matter, and that will keep us coming back.