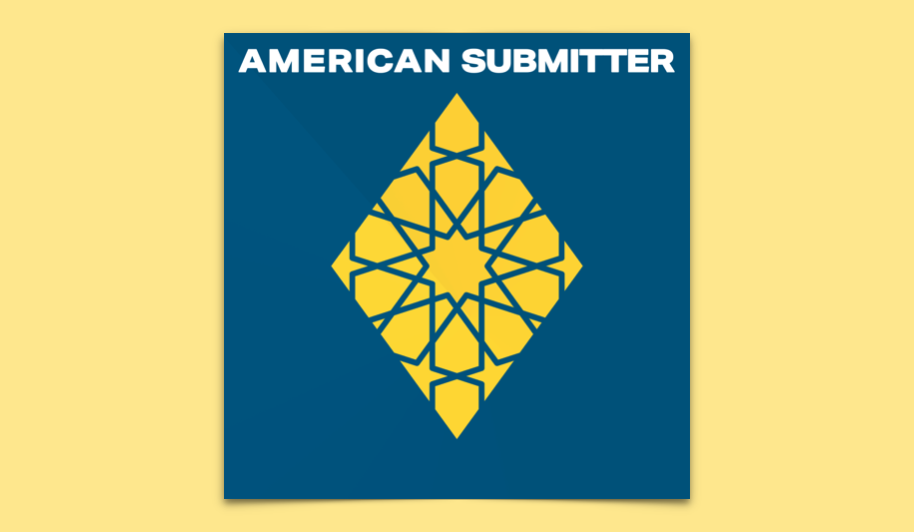 Representation in media is a sensitive topic. Telling stories about underrepresented groups is to walk a tightrope between nuance and universality, between complexity and familiarity. Many of those difficulties are amplified, though, when representation is reduced to physical forms. But what can representation look like when an artist is able to portray the worldview, intentions, and aspirations of their own group?

Enter American Submitter, a new experimental podcast about Muslims in the West and the spiritual teachings of Islam hosted by Imran Ali Malik. The podcast is not focused on theoretical spirituality found in scripture or scholarship, but rather with the lived realities of those teachings. American Submitter attempts to translate what it means to be a conscious Muslim in America not just in the show’s content, but by expanding the form of narrative podcasting. The show oscillates between audio-documentaries that follow the subject around in real-time, reflections from Malik and his guests, narrated stories, and long form conversations.

Upon first listen, this variety of formats in a single show can seem undisciplined, but this playfulness in structure becomes necessary when one considers the range of stories and topics the show is able to bring us into. One of the show’s most intimate episodes, “Hidden Treasures (They Want to Be Known),” is an audio-documentary of an afternoon with Safiya, the host’s two-year-old daughter, and her caretaker Kari. The episode transports the listener into the car with the three of them on the way to a park. Safiya’s exuberant voice marvels at the beauty of a eucalyptus tree with the novelty only a child’s eyes can provide, Google Maps navigates, and the low hum of a Toyota Prius and traffic sounds paint a picture of driving around Oakland. The listener splits time between Safiya’s world and conversations between Kari and Safiya’s mom, Asma, as she recalls what went into the decision to get a caretaker and what the experience has been like for her as a mother balancing parenthood and medical school.

Episode two, “Learning From Experience” finds Malik engaged in conversation with Ubaydallah Evans, a prominent Muslim scholar in America and the first African-American graduate of the renowned thousand year-old al-Azhar University in Egypt. Rather than delving into the complexities of Islamic law or religious discourse in the U.S., Evans and Malik discuss what it means to feel like an imposter, and what kind of spiritual lens is needed to counter feeling out of place or at a loss. The episode concludes with the heartbreaking story of how of Evans’s first wife passed away in his arms, and what he learned from that experience.

The vulnerability of these moments unveil the show’s greatest strength: by creating an environment that invites the listener into Malik’s home and community, and by broadcasting conversations that normally take place in private, the listener is invited to be a member of this community. We are able to live in these experiences and reflect on them right alongside Malik.

These are mature conversations, and they are particularly important for a community as scrutinized and diverse as Muslim Americans— a community still formulating its collective consciousness. The importance of these conversations is amplified by of the ethos of the guests on the podcast. From high-profile Muslim intellectuals and artists, to people working behind the scenes to support the institutions Muslim Americans rely on, Malik flips the script by engaging with people who are often the ones engaging the larger community. He is uniquely capable of doing so because of the personal relationships he has with many of these guests. This results in honest, deep conversations over a spectrum of topics only a close friend could know to ask about.

Within the show, Imran Ali Malik is as much subject as he is host. As the show unfolds, listeners learn more about Malik and are able to piece together a picture of the journey that led to the creation of this podcast. A former member of a prominent Muslim punk band (one of the first of its kind, The Kominas) Malik experiences a spiritual crisis that sees him exit the band and destroy his old relationships. His crisis reaches a climax when, at age 31, he decides to go back to school and earn a degree in Islamic law and theology. Rather than go the traditional method of learning in Egypt, Turkey, or Pakistan, Malik decides to enroll in Zaytuna College, an experimental Muslim liberal arts college in Berkeley, California, which tries to bring the classical western tradition into perspective with the Arabic Islamic tradition.

And though the life of a punk rocker and that of a theology student might seem to stand at odds, the more we hear Malik reconcile his past and present, we learn that perhaps what leads a person to become a punk rocker or a theology student is the same: a deep intention for life. During his days in the band, Malik was driven by a strong rejection of faith that arose from the hypocrisies he perceived around him. Today, Malik is driven by an affirmation of faith and a deep understanding of the Divine that has stemmed from a lifelong pursuit of Truth. He’s the same person, just running in different directions — but running nonetheless.

Driven intentionality requires introspection: asking difficult questions, and being uncomfortably honest with the answers. Malik does not excuse himself from this process, and he candidly examines his ideas and how they shape his worldview when confronted with different perspectives. Nowhere is this more present than in episode six, “Azhar Usman: We’re Not Serious,” when Malik is joined by comedian Azhar Usman to discuss Hulu’s critically acclaimed show Ramy (2019), starring the comedian Ramy Youssef, and Aziz Ansari’s new Netflix comedy special, Aziz Ansari Right Now (2019). Usman, who serves as a writer and adviser on Ramy, and plays a recurring character on Amazon’s Patriot (2015), is able to explore the depth of both shows and extrapolate meaning that a casual viewer might either miss or dismiss.

By portraying a young Muslim trying to know God while battling—and often succumbing— to temptation, Ramy shatters the idealism found in religious communities that suggests one needs to be perfect to be righteous; by including a teenaged non-Muslim white girl battling depression and loneliness, Ramy empathetically includes a character who far too many of us know in real life, and dispels any tribalistic tendency religious groups can fall into by only caring for their own community. Upon recognizing this, Malik himself initiates a discussion on why he initially dismissed the show, and how at times he falls into some of the aforementioned thought patterns. But in conversation with Usman, Malik goes on to declare Ramy a “medicine” for him, helping shift the way he thinks as an artist, Muslim, and human being. The medicine already kicks in by the time he watches Ansari’s special, and this is evident from the discussion that follows. The evolution of thought present in just a single episode indicates not only that Malik isn’t afraid to assess and reassess his views and perspectives, but that he embraces it, openly. So much so that he’s willing to be honest about that growth and progression with listeners when it happens.

This is the “Inception”-like realization of the podcast. Just as the now classic Christopher Nolan film plays with dreams inside of dreams, the experimental form of this podcast reflects the experimental nature of being a human being; the unique ability to invent and reinvent yourself in America; and what it means to believe in God in the 21st-century West.

Within the genre of podcasts focusing on Muslim Americans and society, American Submitter is an absolute anomaly. The combination of intentional and aspirational representation, the lived experiences of Malik and his guests, and dynamic storytelling that switches between first and third-person narration create a show that unfolds in real time. Imran Ali Malik has created a wildly diverse yet cohesive show that invites the listener — no matter who they are and what their background is — to participate in the experiment of life alongside him.