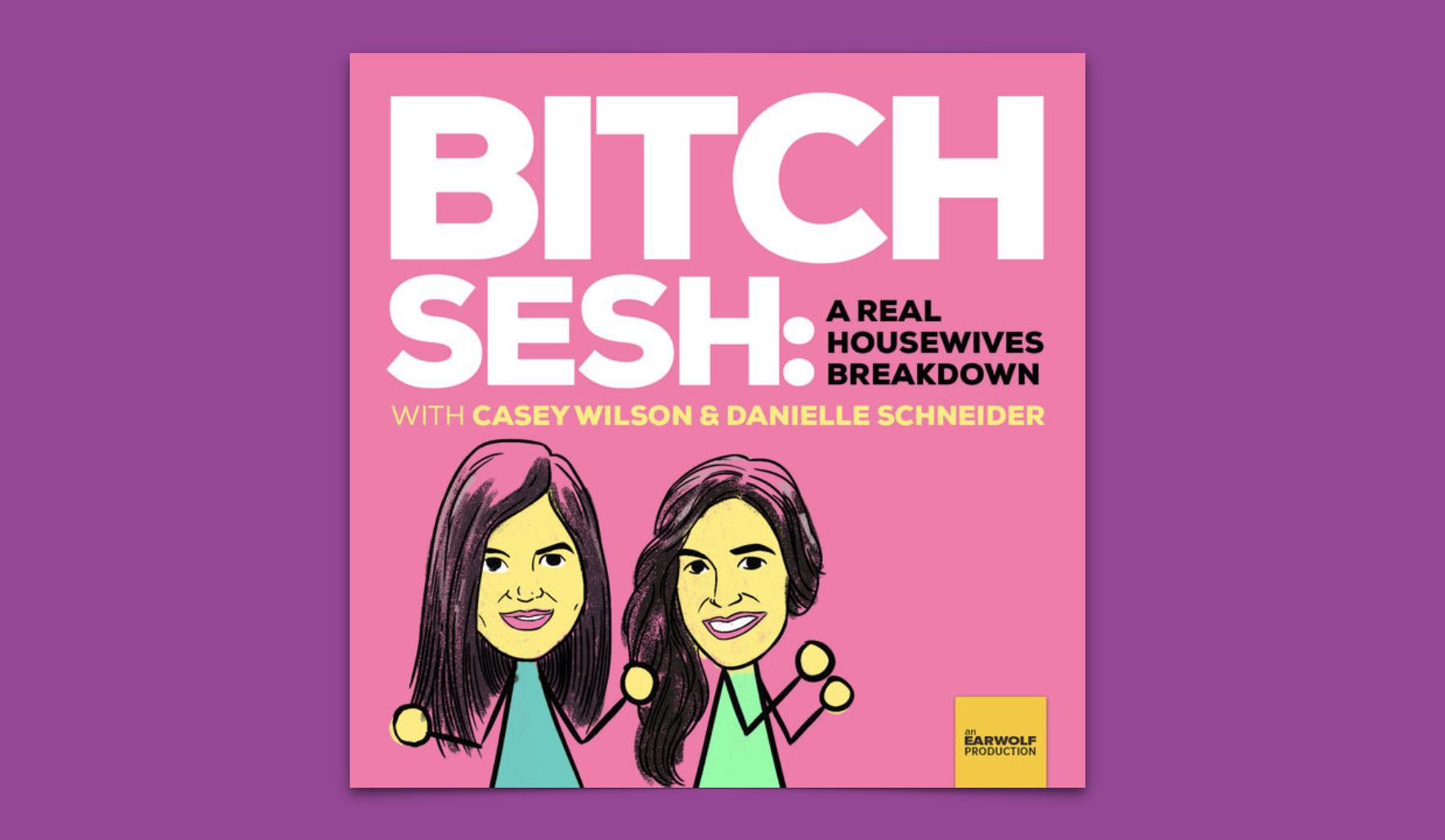 On Bitch Sesh, comedians Casey Wilson and Danielle Schneider — whose bonafides respectively include Saturday Night Live and It’s Always Sunny in Philadelphia — fearlessly dive into the complexities of a reality TV universe that is considered trash by the masses. Wilson and Schneider (or, to listeners, Casey and Danielle) adamantly reject that assessment. Instead, they treat Bravo’s Real Housewives franchise and its spin-offs as nuanced texts that warrant our close examination. “This is the Shakespeare of our time,” Casey and Danielle remind listeners, before going in on, say, Atlanta Housewife Kim Zolciak’s offensive lip injections or New York Housewife and self-proclaimed countess Luann de Lesseps’ unforgivable choice to dress as Diana Ross for Halloween in blackface (“I may have overdid it on the bronzer,” Ms. de Lesseps claimed).

The formula of Bitch Sesh is consistent: recorded each week in “the nook” (Casey’s kitchen), the hosts and a revolving door of guests wax poetic on Bravo before inevitably delving into the whole of feminine experience. The result is a thoughtful discussion of cultural garbage which occupies a sweet spot between an HBO comedy special and a Sunday brunch. Episodes are long and rambling, but this only adds to Bitch Sesh’s charm and intimacy. In fact, it is the dynamic engagement between the podcast’s hosts and its listeners, which begins in the familial setting of “the nook” and is nourished by the connective tissues of the internet, that has established Bitch Sesh as the vibrant macrocosm it is.

Like the expansive universes of Game of Thrones or Lord of the Rings, the world of Bitch Sesh has its own players (Bravolebrities and Bitch Sesh regulars), laws (“No tagging the Housewives on social media!”), and lexicon (“Don’t let it be about Tom!”). Though the podcast airs once a week, Bitch Sesh continues its analysis of Bravo on their Facebook group, titled Whispering Alenes – a nod to Casey and Danielle’s rosé of choice and Housewife Kyle Richards’ egregious boutique. And while Whispering Alenes began as a way to expand the scope of the conversation broadcasted on Bitch Sesh, the group now devotes as much attention to discussing the podcast itself, performing a kind of Housewives historiography and designating a theater onto Bitch Sesh.

The podcast’s rolodex of beloved guests runs the gamut from the familial to the prestigious and includes Casey’s sister-in-law Shira Caspe-Weiss, the hosts’ friend June Diane Raphael, comedian Vanessa Bayer, writer and podcast host Kara Brown, author Roxane Gay, and even the Patron Saint of this world, Bravo executive Andy Cohen. With Bravo as its foundation, Casey, Danielle, and their guests weave in and out of caricatures of themselves and absolute authenticity as they contextualize the Housewives’ drama with the hard realities of 2018.

Much like with the Housewives, the Whispering Alenes (what Bitch Sesh’s fans call themselves) celebrate the podcast’s dialogue each week. Take, for example, the case of June Diane Raphael on episode 88. After sharing with listeners that her car had somehow been stolen out of her driveway, Raphael’s ensuing dialogue became the stuff of Bitch Sesh legend with her words, “I’m not taking that on.” Raphael explained further: “I’m not going to take on the identity of someone who’s had their car stolen from their driveway. I’m not going to take on the experience of that or what that means. I’m not going to take on the worldview of the victim of auto theft. All that is attached to it is not for me. I see that that happened over there, but that’s not anything for me.”

This mantra immediately sent ripples through the Alenes’ world. Whereas before episode 88 aired, many of the Bitch Seshers had Etsy shops selling Bravo themed merchandise (e.g. “Who Gon Check Me Boo?” totes and “Don’t Let It Be About Tom” mugs), soon t-shirts and needlepoints advertising “I’m Not Taking That On” saturated the Whispering Alenes feed.

Capitalizing on the role of community inherent to the podcast’s success, Casey and Danielle often tell listeners that the show is a safe space. The hosts of Bitch Sesh are self-aware in their exploitation of safe-space discourse in order to talk serious shit, but, in so doing, Whispering Alenes has become a truly safe space. What is not advertised by Bravo is that the experience of trauma underscores all of the Real Housewives franchises. From The Real Housewives of Beverly Hills (where issues of addiction underscores all of its televised drama) to The Real Housewives of Atlanta (where issues of domestic abuse and racism have lead to its most crucial storylines), Bravo never shies from broadcasting the real stories of women, no matter how tough.

But for all the attention Bitch Sesh gives to, say, Vanderpump Rules’ Lala Kent sucking milk from an actual baby’s bottle to quell her hangover, Casey, Danielle, and their guests deliver their most compelling monologues when discussing the intricacies of their own experiences. Casey, for example, has shared that she ate two boxes of Entenmann’s donuts in a bodega on 9/11 (under the assumption that it was the end of times), that she was forced by SNL to release a public statement saying she wasn’t fired from the show for being fat but for not being funny, and of her struggles with postpartum depression. For all its parody, Bitch Sesh recognizes just how complex women’s lives are and — whether on reality TV or in reality itself — the performances they are expected to give.

Samantha Kohl is a writer based in New York City.