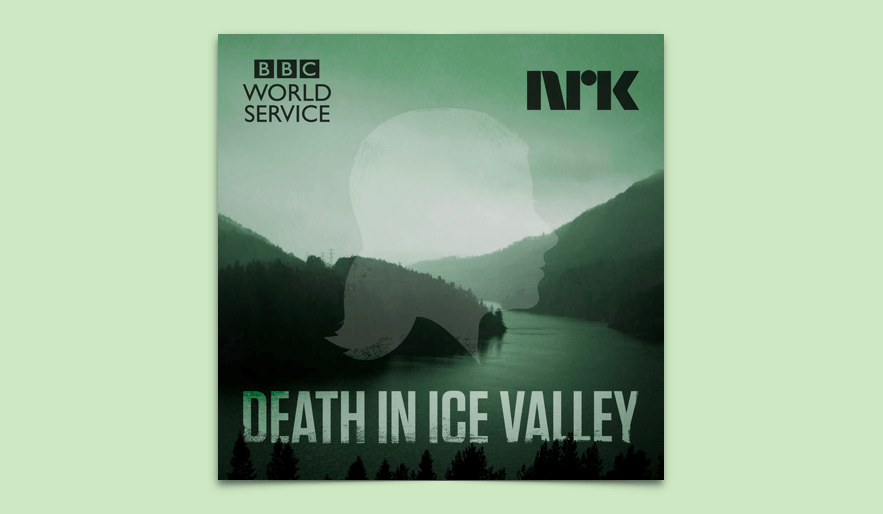 Death in Ice Valley begins with a gruesome, lonesome story. On Sunday November 29, 1970, a twelve-year-old girl and her father are hiking in the Isdalen valley—the Ice Valley—not far from Norway’s “second city,” Bergen. The Ice Valley, also called Death Valley by locals due to high numbers of suicides, is remote and wooded. Through a clearing in the forest, far from any trail, the girl notices a figure prone and on their back, situated on a “scree slope among big rocks.”

This figure happens to be a woman burned beyond recognition. Her hands defend her face, as if she’s fallen in futile self-defense.

The girl and her father rush to get help. When the police arrive, they find, beside the woman’s charred body, “fragments of clothes, an umbrella, and carrying equipment. Two melted plastic bottles. A half bottle of the State Liquor Store’s self-produced ‘Kloster Liqueur,’ a nearly totally destroyed plastic cover, possibly for a passport.” There is jewelry too: a watch, two earrings, and a ring, though none were on her body. In fact, they were arranged beside the body as if there had been “some kind of ceremony,” one of the case’s forensic investigators says. How the woman had found her way deep into the Isdalen Valley, how she died—by falling onto the fire by accident, or as suicide, or something more sinister (how did she end up on her back?)—and who she was became the central, challenging, impossible questions for investigators.

In the days following the discovery of her body, investigators discover two suitcases abandoned at the Bergen train station. Inside the luggage they find a pair of sunglasses, and on one lens there is a fingerprint that matches the Isdal woman’s. Investigators also find, much to their bafflement, that all tags have been removed from the clothes and all labels scrubbed from the cosmetics. They find various wigs, glasses without corrective lenses—a woman willing and able to alter her identity. Yet even as investigators follow leads, speak with locals, shop owners, and hotel clerks that recall a strange woman (her appearance, her accent while speaking English, a “garlicky” odor), they are unable to do anything more than confirm that these sightings were probably the Isdal woman. Hotel registries show she used various names (Finella Lorck or Fenella Lorch being the narrators’ favorite) and various dates of birth. She claimed, in these hotel registries, to come from Belgium. But still, investigators cannot uncover her true identity. Calls go out to the populace far and wide, even internationally, but yield nothing.

Eventually she is buried in a zinc casket, which will protect her remains in the event she is exhumed. No family or friends attend the funeral, as none are known. [i] 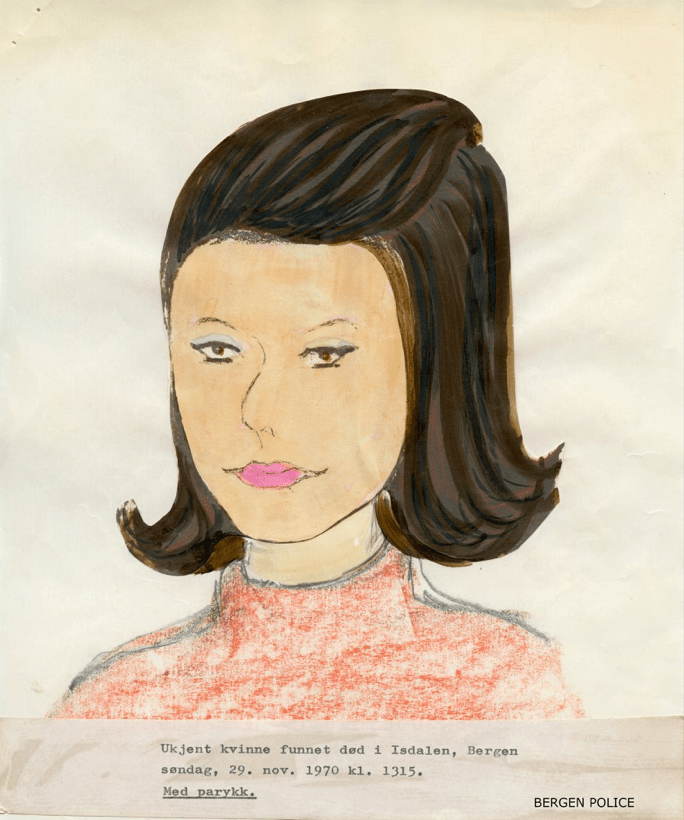 In ten incredibly detailed and riveting episodes, the Norwegian Broadcasting Corporation’s Marit Higraff and the BBC’s Neil McCarthy ask and call on archives, experts and witnesses to try to answer the following questions: Why did the Isdal woman travel by herself to Bergen and also Stavanger (a coastal city in Norway), two places not exactly centers of tourism, especially in cold and dark November? Why had the labels been scrubbed and the tags removed? Why did she use so many identities? Their investigation uncovers that she had been in the company of some men; there are eyewitness accounts of a rendezvous near a port frequented by military sailors, German, American, Norwegian, and NATO, at the height of the Cold War. Who were these men? Why did none come forward after her death? Was she a spy, sex worker, or something else entirely? Was she a Mossad agent? Nazi hunter? Rare art collector or retriever, as some members of the podcast’s active and engaged Facebook group have proposed?

Today, 48 years later, all of these questions remain unanswered. As Higraff and McCarthy suggest at the beginning of the podcast, the case of the Isdal Woman is one of the enduring mysteries of our time. But now there are forensic—and social—technologies available that might reveal far more than was possible in 1970. So begins the podcast’s twofold mission: to use this forensic technology, alongside the power and reach of podcasts, to finally uncover the identity of the Isdal woman.

This dual use of technology makes Death in Ice Valley one of the most engaging crime podcasts to date. And like the narrators of Serial and In the Dark, Higraff and McCarthy engage in journalistic conversation to propel the narrative and investigation forward.

That conversation leads to fascinating, if not wildly meaningful, discoveries. For instance, the podcast lingers on the meaning the Isdal woman’s teeth might hold. Incorporating the voices of experts, Higraff and McCarthy explore how the woman’s extensive gold fillings and other complex work suggests that her teeth were repaired in Eastern Europe, where such materials were more commonly used. The experts easily rule out Western Europe and the U.K. because dentists in those countries rarely worked with gold.

Or there is the way that scientists will attempt to determine her age by measuring the level of Carbon-14 present in her wisdom teeth:

One of the methods that is so powerful is analyzing Carbon-14, which is an isotope…that is known to be radioactive, and has been used in archaeological studies all over the world…We are taking advantage of the increased levels of the Carbon-14 that started to occur in 1955, due to extensive test bomb detonations of nuclear weapons from 1955 through 1963. And that was just a side effect…Carbon-14 has been incorporated in[to] our bodies ever since. And the teeth, they are formed at a certain time after a person is born, and then by looking at the Carbon-14 levels in a particular tooth, we can match that with the particular levels in the atmosphere at the time (Episode 8).

There is analysis of the woman’s handwriting, which multiple experts confidently suggest proves that she attended school in France. Her DNA (mitochondrial, on her mother’s side), reveals that she’s of European descent, and another isotope test on her teeth—“traces of elements in the teeth which can indicate where a person grew up based on the food and water they consumed as a child”—pinpoint her living in Nuremberg, Germany, where she was born sometime in the late 1920s or early 30s. When she’s older, “there is evidence of the movement of the person…between early childhood and the teenage years [during the second World War] to areas [like] the U.K. and Belgium” and the French-German border.

Will these analyses lead anywhere, in terms of solving the case? Not really. But the podcast revels in the pleasure of this work, of taking immense care to uncover every possible detail about the Isdal woman. This is what elevates Death in Ice Valley to the rare work that is both engaging (you can’t stop listening), educational (a quick glance at the podcast’s Facebook group, in which there are well over ten thousand members, reveals just how many listeners have taken to amateur sleuthdom), and full of heart, of the best of people.

As the Isdal woman’s story becomes increasingly complex, the narrators struggle to turn discoveries into revelations. Perhaps the unfinishedness, the work in progress, is part of the fun. But it also relieves the podcast of the traditional pressures of storytelling. After ten episodes we have a better idea of who the Isdal woman was, but only marginally. She remains as enigmatic as ever. So this podcast raises more questions than answers—but this isn’t necessarily a bad thing. The continuing mystery has created a Facebook community alive with theories and explanations and some remarkable research; seemingly the type of energy and dedication that could’ve helped solve the case in 1970. Members, including those from the BBC, have posted images of the crime scene, both then and now, the woman’s belongings, historical images of Bergen, photographs of locales and people relevant to the story, detailed shots of the woman’s teeth, and much more. And while this community, like the podcast, hasn’t yielded results, something new has been created here. Death in Ice Valley extends the possibilities of communal crime solving into communal storytelling, a prospect bound to transform the medium.

[i] For a more detailed exploration of early investigative efforts, both the BBC and NRK offer text representations with ample visual support. The show’s Facebook group also details all of the items found next to or near the woman’s body in Ice Valley.