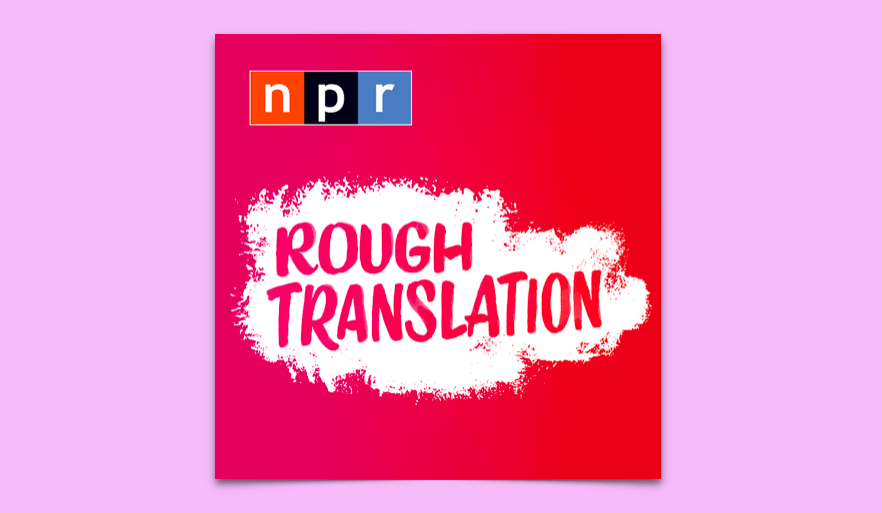 NPR’s Rough Translation has a generous mission. As host Gregory Warner explains it each week, “This is a show about how the conversations we’re having in the United States are being heard and translated in some other corner of the world.” Were this podcast, which just finished up its second season, to keep its focus narrowly on the complexities of language, it would already have years of material at its fingertips. But the show’s scope is much grander, infinitely even, as Warner and the show’s reporters select stories from across the entire world, with topics ranging from policy debates to the failures of translation.

This freedom gives Warner and his production team the chance to foreground the reporting. Many of season two’s episodes span years, piecing together personal histories with on-the-ground news coverage. We follow a Japanese-American who made it her mission to facilitate an apology from Japanese corporations to American World War II prisoners of war, a Ghanaian educator trying to change the fundamental philosophy behind her teaching, and Pakistani sisters whose lives keep finding parallels with the novels of Jane Austen. The season is purposefully undefined. Rough Translation wants to find culture-bending stories, even if the links between them are loose.

Rough Translation takes advantage of the NPR war chest. You get the sense that the greatest resource Gregory Warner has at his disposal is the passion projects of NPR’s many foreign correspondents. The work that goes into an episode of Rough Translation is astounding. Given the realities of foreign journalism, Rough Translation projects tend to be stories that began as smaller news items and gradually obsessed the reporter, forcing them in directions far stranger.

The fact that Rough Translation relies so heavily on the storytelling instincts of journalists means that the reporters occasionally take over the story. These are the most compelling episodes of Rough Translation’s second season, those in which the reporter steps into the story and makes clear her personal stakes.

Two particularly startling episodes follow this format, letting a journalist investigate the legacy of popular culture in their own lives without sacrificing the level of reporting typical of the series. The third episode of the season, “Intruders,” is a collaboration with This American Life and follows reporter Jasmine Garsd, who returns to her home city of Buenos Aires to investigate a TV talk show mystery: the host of the exploitative daytime talk show Intrusos has revamped his program around sincere interviews with feminists. The episode’s inciting question, whether or not host Jorge Rial has changed his TV persona in earnest, mutates into one about the relationship between the most mindless pop culture and social change.

What makes the episode work is Garsd’s own relationship to Rial, a man she’s never met. The story begins with the surreal scene in Garsd’s New York home when she turns on her favorite guilty pleasure from back home to find a serious conversation about legalizing abortion in Argentina. The episode is as much about Garsd’s coming to terms with the idea of a trashy talk show as a vehicle for social progress as it is about the show’s mission to normalize feminist dialogue on the airwaves. For better or worse, Intrusos will always be knocking around Garsd’s head, a vestige of some of the earliest pop culture she ever absorbed. The argument the episode begins to make is that that legacy gives mindless culture like Intrusos a whole lot of power.

The season’s final episode is twistier. Without giving too much away it follows the reporter Diaa Hadid, three Pakistani sisters, and the multitude of ways their lives have intersected with the novels of Jane Austen. Hadid’s reporting asks whether Austen’s novels are a source of hope or violent disappointment for the women who end up in arranged marriages. The answer the episode offers is wonderfully inconclusive. What the episode does make clear is that having a relationship with an author is a lifelong effort, control over which may be impossible.

The remaining episodes are newsier, sounding closer to longform on-air NPR features than narrator-driven podcasts. These episodes are expertly-told, but less intimate than the personal editions. While “The Apology Broker,” “Ghana’s Parent Trap,” and “War Poems” tell the stories of one person or a couple people trying to communicate with a group from a foreign culture, the Argentina and Pakistan-set episodes focus on the individual, and how one person makes sense of the many influences inside them.

Rough Translation deserves credit for the many disparate cultural histories it fits into the five recent episodes. The show makes no claim to seasonal coherence, but the variety of investigations and reporting styles in season two makes it hard for the show to claim a singular identity. This is an intentional choice, but it may leave some listeners searching for what these stories have in common.

The most interesting lessons from Rough Translation’s second season are the ways in which the cultures that surround us for any period of our lives refuse to let us go. At its best, it’s a show that not only flexes its reporting chops, but wonders what makes reporters curious in the stories they spend years chasing in the first place.

Jake Greenberg is a culture writer based in Brooklyn. He has written for The Guardian, Mac Weekly, and RealClearLife. Feel free to email him at [email protected]