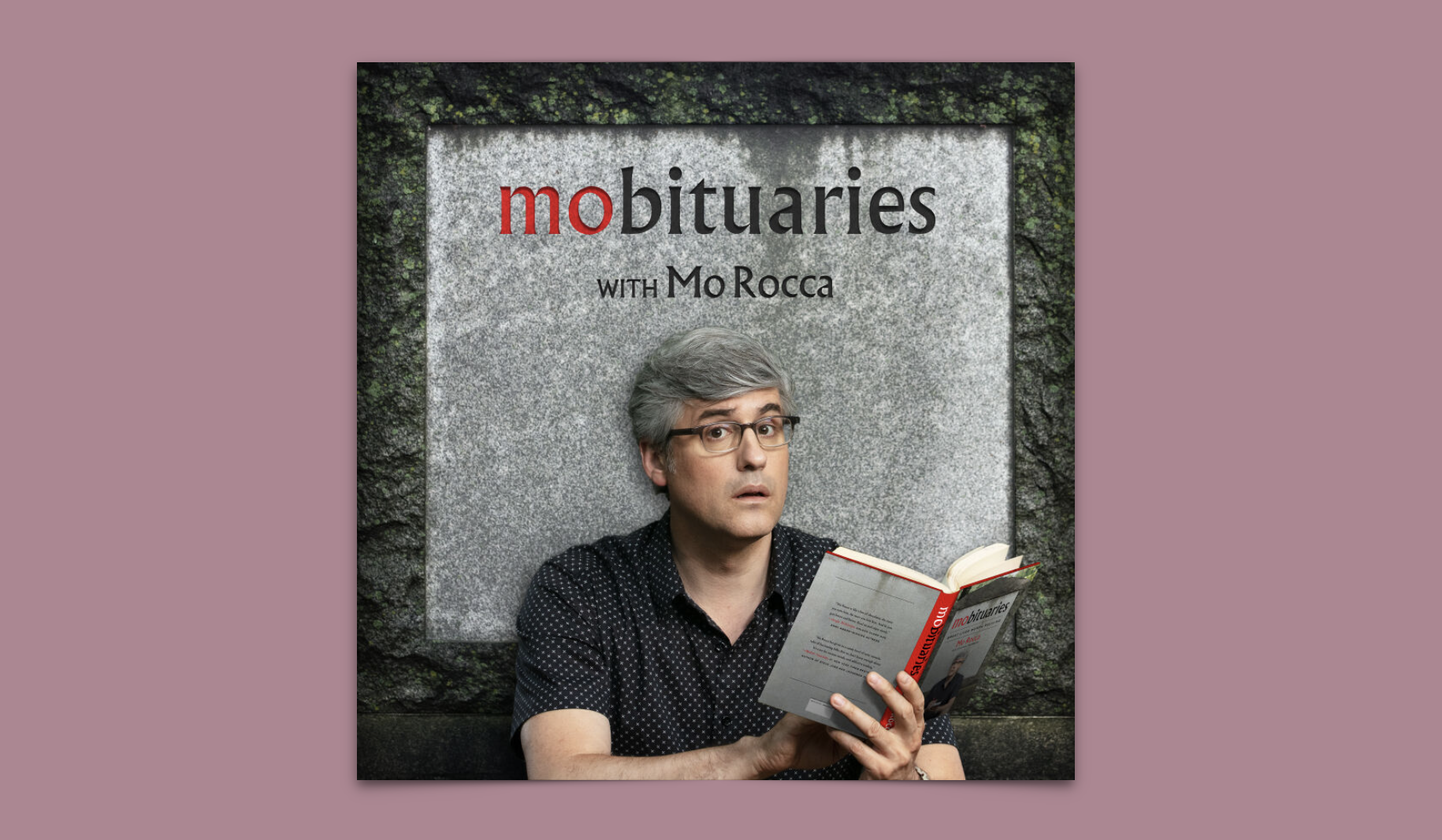 Mobituaries, a podcast hosted by CBS Sunday Morning correspondent Mo Rocca, likes to pay homage to its flashier media forerunners, film and television. In one episode, Rocca jokes that “life didn’t really exist before television.” In another, he compares obituaries to trailers for Oscar-winning biopics, which he says are “usually much better than the full movie.” Even the obituary, the very namesake of the show, is viewed through the lens of cinema.

It’s not that Rocca and his team don’t understand or appreciate other media; it’s that as much as Mobituaries is about remembering the dead, it’s also about shaping our collective culture. And for much of the adult population, the collective culture is shaped by TV and film. Thus, an episode about neanderthals is partly about correcting our misconceptions, but also partly about the media that gave us those misconceptions.

As you may have gathered from the show’s title, every episode of Mobituaries is an obituary, with Rocca choosing aspects of the past that he thinks deserve another look. He seems to have a particular interest in entertainment and politics — and often the intersection between the two — so episode subjects range from Common Sense author Thomas Paine to “Gloria” singer Laura Branigan to presidential brother Billy Carter. A couple episodes take a more abstract approach to the obituary form and memorialize things like the aforementioned neanderthal, or CBS’s country-themed broadcasting.

That CBS connection might give us a moment of pause as we question the commercial motives of a podcast that spends an episode talking about the products of the company that funds it. But whether or not those motives exist (and almost all podcasts probably have some commercial motivation), CBS also gives Mobituaries some of its best audio. In the first episode of Mobituaries, a Mobit for President John F. Kennedy impersonator Vaughn Meader, Rocca visits the CBS News Archives, where he finds an interview with Meader conducted in 1998, well past the period in American history when impersonating President Kennedy could make you a star. The interview is a goldmine—an intimate look into the mind of a man who has seen his fortunes dimmed, but in whom we can still hear the remnants of lost fame.

The power of that interview underscores one of the most difficult parts of making a podcast about dead people: you can’t interview them yourself. Rocca is left with finding whatever clips he can through research. Sometimes, as with Meader, he finds audio that is complex and touching. But in other episodes he has to turn to more contrived ways to tie the story together into a satisfying narrative.

But even if every episode can’t reach the intensity of the Vaughn Meader Mobituary, Rocca’s flair for showmanship keeps the show entertaining. In the Thomas Paine episode, Rocca caps his recognition of Paine with a musical number written by Broadway songwriters that he performs at a bar in New York’s Greenwich Village. As that song shows, Mobituaries can be a light affair, often approaching its dead subjects with humor. Rocca, a former Daily Show correspondent, is perhaps at his best when making quips about his “classy” appearance on VH1’s I Love the 80’s or how fertility rates cannot support all the television that now exists.

Another of the podcast’s strengths is how relevant to current events the episodes often feel. The episode about country-themed programming recalls the cultural divisions that inform modern American political discourse. Vaughn Meader’s episode reminds us that the issues brought about by something like deepfakes are not uniquely modern.

Mobituaries is not without its flaws. There are occasional moments of audio that drag, and episodes that can feel slight. Even with its educational subject matter, the show frequently opts for entertainment over enlightenment. Despite these shortcomings, the show succeeds partly through personality and partly through heart. The podcast doesn’t dive head-first into sentimentality, but it does care about its subjects (perhaps too much sometimes, as Rocca admits in the Audrey Hepburn episode). That care gives the show humanity, extending that humanity to even the neanderthals who have so long been denied it.

Some of the best moments of Mobituaries reveal to us, as many popular history podcasts do, that the contours of history don’t look quite the way we thought they did. Rocca shows us the black congressmen elected before America decided blacks shouldn’t be in Congress, and the superstar female director who dominated the film industry before America decided women couldn’t be directors. By reminding us of our history, Rocca seeks to reconfigure our understanding of what is possible, to revitalize discarded bits of the past and give them the Broadway glamour they deserve.