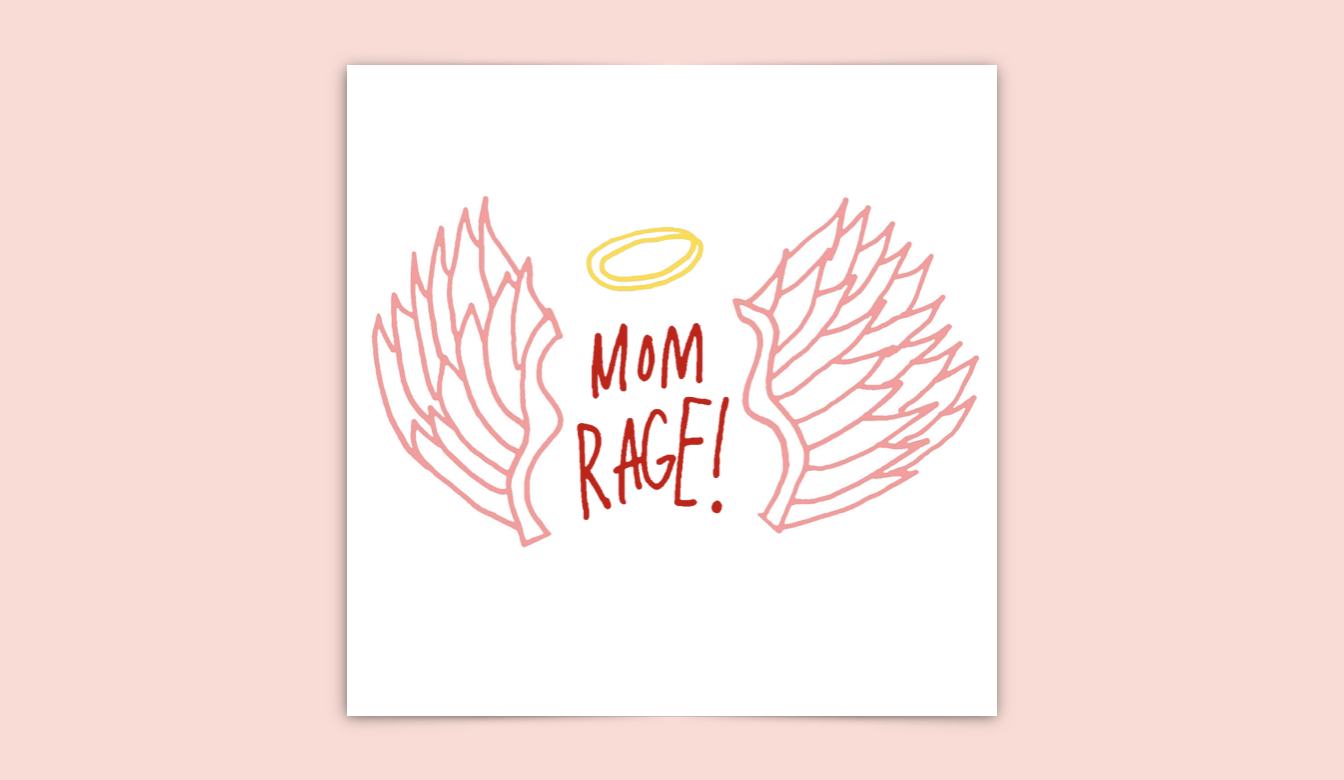 “Welcome back to Mom Rage” begins each episode of Mom Rage, a weekly parenting podcast hosted by Los Angeles-based writers and mothers Edan Lepucki and Amelia Morris. Treating the listener as though she has returned after having stepped out for a minute, the podcast’s in medias res opening lets you know that Lepucki and Morris are happy you’re back, regardless of your emotional state. As the show’s tagline declares, Mom Rage is “the podcast for your best and worst selves.”

Rage has been a hot topic of late. In Good and Mad, Rebecca Traister chronicles the transformations that women’s fury has wrought on the American political landscape. In Eloquent Rage, Britney Cooper reframes the historically negative public discourse around black women’s anger by persuasively characterizing it as a “superpower.” And in Rage Becomes Her, Soraya Chemaly describes the infuriating cultural circumstances that women confront, the crippling problems that result when we don’t allow ourselves to feel anger about those circumstances, and the strategies we can use to channel our rage into action.

Even while these books document the political and cultural importance of rage, however, maternal rage remains a third rail in public discourse. Good mothers, so many representations show us, embody love, not anger. And yet, many mothers find themselves furious – about the societal injustices that Traister, Cooper, and Chemaly chronicle and, sometimes, about the things our partners and children do. In one installment of her “Parent as a Verb” series on the website of The New Yorker, cartoonist Emily Flake asserts that “The emotion you really don’t truly, deeply understand until you have kids isn’t love. It’s rage.” She then illustrates “the petty, ridiculous hills that must be climbed every day you’re a parent,” including panels that depict her frustration over a shoe-wearing battle and her fury when her daughter kicks her in the shin.

On Mom Rage, Lepucki and Morris loosen the knot of expectations that surround motherhood, creating space for women to talk honestly about their emotional experience of parenting. Most episodes begin with the hosts discussing an example of their own Mom Rage – in one, Lepucki describes the anxiety she feels when her first-grade son is sent to the principal’s office; in another, Morris details an argument that she and her husband had after many nights of wakeful children and itinerant sleeping. The episodes then go on to feature an interview with a mother. Lepucki and Morris’s guests, who have ranged from writers to birth workers to Morris’s own mother (with whom Morris has a fraught relationship), share intimate details of their maternal lives. One guest confessed that she stopped breastfeeding her children, in part, because she wanted to smoke; another explained that what helped her handle her son’s autism diagnosis was a friend who told her that she needed to treat the situation as though she had “been given an assignment.”

Much parenting media centers on advice. In large Facebook groups, moms and dads ask how they can handle tantrums or manage separation anxiety; on podcasts like Slate’s Mom and Dad are Fighting and Janet Lansbury’s Unruffled, experts respond to queries about how to get children to eat or sleep. The focus of Mom Rage is different. This podcast encourages parents to talk honestly about their emotional experiences. On one episode, a mom from Toronto called in to the podcast’s “Labia Hotline” to describe the “big, ugly, sobbing tears” that she cried one day when her teething 16-month old refused to nap. In response, Lepucki and Morris didn’t rattle off naptime solutions; instead, they empathized with the caller and acknowledged her way of processing. “I’ve always felt, as I’m mothering, this back catalogue of all the things I’m going to do when they’re away from me, and I always feel guilty about keeping that back catalogue,” Lepucki commented. “I … love your self-awareness…. I think it’s really good to know that [your mom rage comes out in tears], and it’s good you’re getting it out,” Morris added.

Accepting children’s emotions is a foundational principle of modern parenting. The first chapter of Adel Faber and Elain Mazlish’s now-canonical parenting book How to Talk so Kids will Listen & Listen so Kids will Talk instructs parents to listen to, acknowledge, name, and wish-fulfill their kids’ emotional desires. On the Hand-in-Hand Parenting website, the page about children’s aggression explains that kids’ acts of violence stem from powerful feelings and advises parents to prevent hitting by finding another outlet for their children’s emotions: “you want her feelings to tumble out in a great big emotional wave.”

Even while parents are encouraged to accommodate our children’s feelings, though, there is almost no space where parents afford each other the same grace. New parent groups can quickly become zones of judgment: your decisions about where you birth, where your baby sleeps, and whether you go back to work are often interpreted as proxies for your position in the culture wars, and other parents respond to your choices with concomitant passion. In her book Small Animals, Kim Brooks details the culture of judgment in American parenting and the anxiety that this culture has helped to spawn:

The way we parent today is molded by our particular class affiliation, political orientation, aesthetic preferences, and personal convictions and beliefs. Attachment parenting, helicopter parenting, free-range parenting, permissive parenting: There are as many brands of parenting as there are of breakfast cereal, and every decision we make about raising our children enhances or detracts from our chosen brand. In a country and culture where so much of our life is commodified and monetized, this shouldn’t be surprising – and yet surprising or no, it creates a particular and peculiar tension, a space between us and our fellow parents that can be difficult to bridge. (60-1)

Through the acceptance that the hosts offer to each other, to their listeners, and to their guests, Mom Rage seeks to bridge this space between parents. This is a podcast where, despite the fact that both hosts breastfed their children, their second guest was a mom who asserted that formula is feminist; where, when a listener who parents a biracial child wrote in to say that she was disappointed in the two white hosts’ propensity to “talk about talking about race,” Lepucki and Morris invited her on for an interview; and where the hosts can spend one week swearing off of time outs and the next acknowledging their occasional value. As a mother, Mom Rage has become a refuge for me, its tone a respite from the judgment that characterizes so many parenting spaces. I quite enjoy being welcomed back to Lepucki’s and Morris’s Rage.

Loring Pfeiffer teaches English at Santa Clara University and lives in San Francisco with her family.