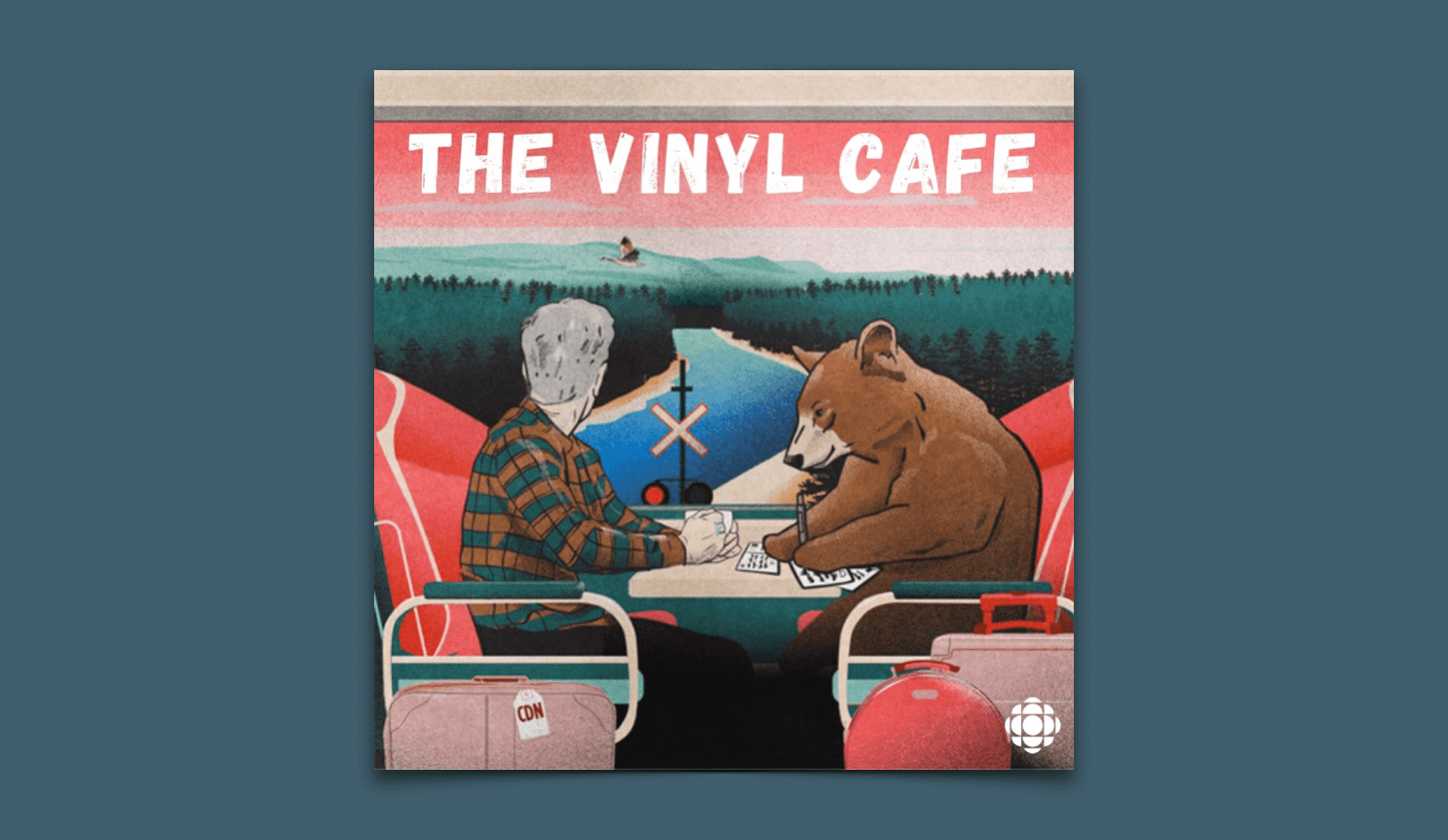 For more than two decades The Vinyl Cafe was a Canadian institution. The CBC radio show hosted by Stuart McLean and recorded in theaters across Canada and the US often drew comparisons to A Prairie Home Companion. But while Prairie Home offered a sentimental version of small-town life and of the radio programs Garrison Keillor grew up loving, McLean’s show was a different beast.

McLean, who died in 2017, was a radio journalist by training, working at the CBC for decades before launching The Vinyl Cafe. The show was anchored by his remarkable voice, the way the audio medium has been since the days of Jean Shepherd, Studs Terkel, and Joe Frank. Each episode included fiction and nonfiction storytelling as well as a musical guest. When the show was on the road, McLean would open with a long essay about their current location. I was always struck by these introductions, which ranged from travelogues to place-based personal essays.

“We would have a sense of why we were going to a place,” Jess Milton, The Vinyl Cafe’s longtime producer, told me in a recent conversation. “We would say, I want to go to Picton, Ontario because this is an agricultural part of the country which used to be dairy farms and is now turning into wineries and vineyards. We would say, let’s go and write about making wine, but I would say nine times out of ten, the thing that brought us there was not what we would end up talking about.”

“If we were recording a show, we would arrive in town four or five days early. We would come with a few storylines in mind and then every morning we would split up and interview people,” said Milton. “The question that we generally started with was, ‘What do you want people to know about the place that you live?’”

In those opening stories, McLean was telling the story of a place and of a people, but he was also drawing his audience into the world of his show. To the fictional characters he created, to his sensibility. He made this small town or that big city something personal. Something neighborly. Opening his show with the story of a place and making it a part of this larger story and community. 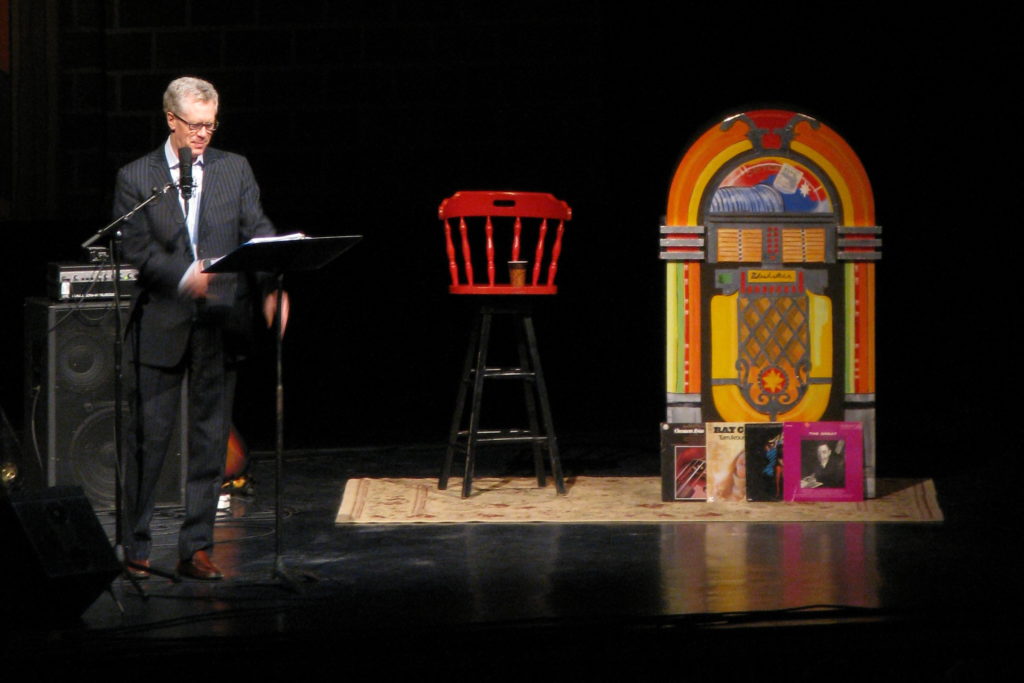 The highlights of The Vinyl Cafe, or the show’s most famous segments, are the fictional Dave and Morley stories. The stories feature a couple and their two children who live in suburban Toronto. The show didn’t start out focused on them, but it quickly became so. There are comic and sweet tales like “Birthday Presents,” or crazy stories like “The Waterslide,” or the famous Christmas tale, “Dave Cooks the Turkey.”

Those crazy stories are what a lot of people seem to enjoy the most. As The Vinyl Cafe was rerun this summer, the image used by the CBC is that of McLean and a bear on a train, the bear writing postcards while McLean looks out over the landscape. It’s an image that’s funny and strange, a little bizarre yet oddly comforting.

Ifirst came across The Vinyl Cafe through stories like “Tree Planting” and “London,” in which Dave and Morley’s teenage daughter opens herself up to the world, to history, to new things in ways that felt both natural and full of wonder. The Vinyl Cafe would be that rare thing today, an all-ages show. It can seem quaint. Ira Glass may warn his listeners that an act of This American Life “acknowledges the existence of sex,” but McLean’s stories don’t. Or at least they skate around such things in a way that means that one can listen with their children – or with their parents – without embarrassment.

In one episode late in the show’s run, before his diagnosis with cancer, McLean learned that one of his stories, “Hello, Monster,” was being used in the Grade 12 exam in British Columbia. It was one of his best stories, but he opened the show talking about how absurd he found the idea. He then had two teachers on, who began asking him the exam questions, and he began talking about what he meant and how he worked. At one point, McLean paused, his producer telling him that he wrote the story while his father was dying. McLean’s voice changed as he took this in. So much of The Vinyl Cafe involved McLean listening and telling other people’s stories, but in that show, and in that moment, McLean experienced what he so often did for others, understanding their story differently, able to listen in a new way.

It’s no surprise that the CBC wanted to rebroadcast the show this year and in particular to play episodes McLean recorded from across the country. It’s a nice tribute to McLean and something for people who can’t travel, but it makes one imagine how McLean might have tried to speak to this moment. Everyone struggling to not drive each other mad as Dave frets about the record store and Morley worries over the state of the theater when things get back to normal. Sam loaded down with goods from Harmon’s, where he works, and trying to cook with them. Eugene dropping bottles of homemade wine on people’s doors. People asking for some of Carl’s sourdough starter so they can get in on the baking craze – at least for a few weeks. Everyone trying to find things to do. People trying to help one another.

McLean believed that the world was a kind and decent place. In his opening monologues, he found ways to bring disparate communities into that world, to highlight the people and values and stories that he found there. Those stories sat side by side with the fictional tales he told of Dave and Morley and their children and neighbors in Toronto. They sat side by side with all the other towns and cities he visited over the years, joined by the people listening from elsewhere.

I was reminded of Erica Heilman’s series “Our Show” on her podcast Rumble Strip, where she asked people to record themselves. It felt very much like something McLean would have enjoyed and related to. People recording themselves, listening to each other. Because that’s all that radio is, really — listening. And sometimes, as we listen, we are able finally to hear ourselves amidst that chorus of voices. Few were better at listening than McLean.

Alex Dueben has written for The Believer, The Brooklyn Rail, The Comics Journal, The Paris Review, The Poetry Foundation, The Rumpus, and many other publications. More of his work can be found at alex-dueben.com and @alexdueben.