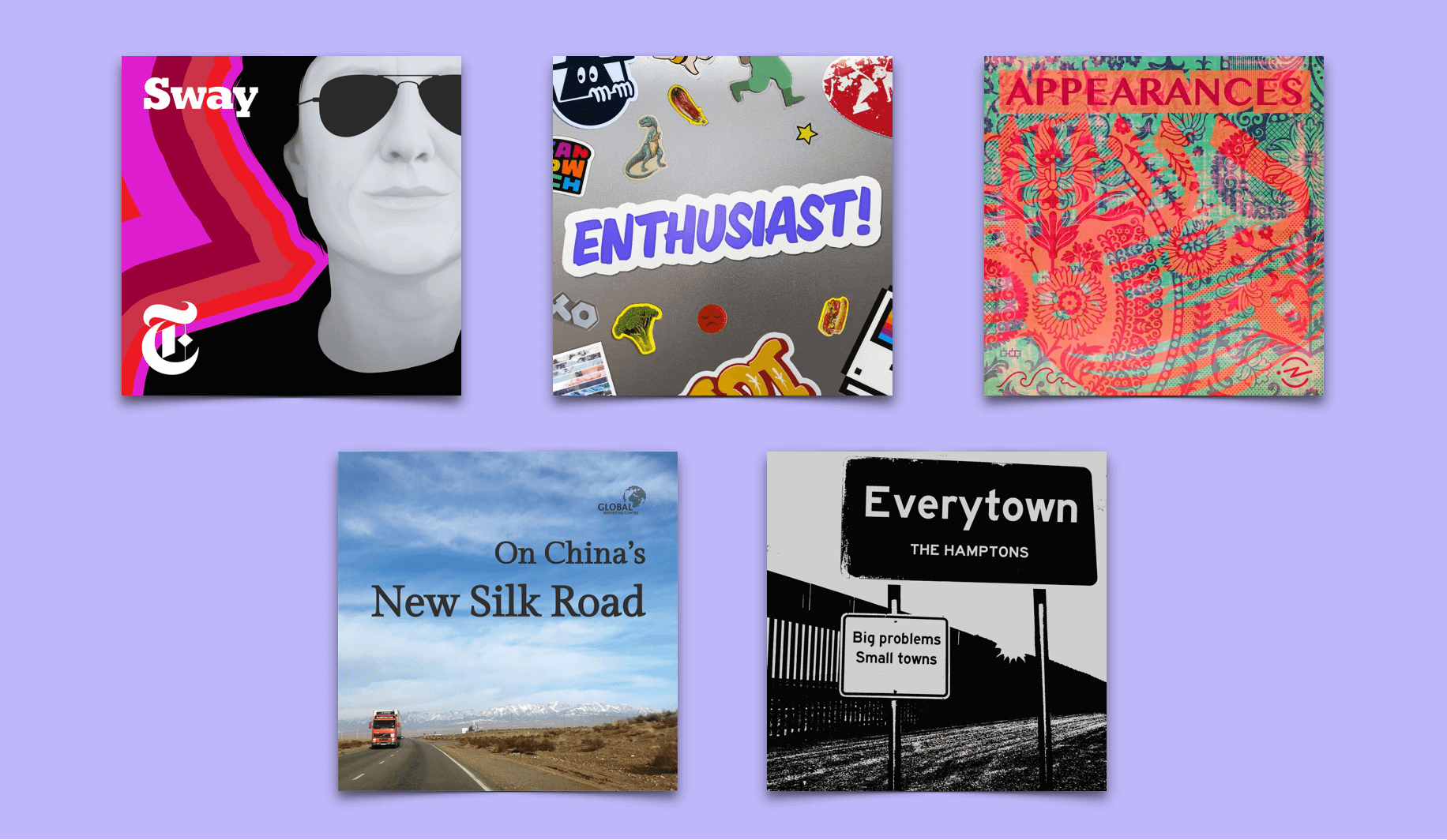 The latest from Kaitlin Prest’s Mermaid Palace production house, Appearances brings us inside the mind of Melanie, an Iranian-American woman negotiating the family she comes from with the family she hopes to start. Sharon Mashihi, the podcast’s creator and the voice behind most of its characters, explains in the prologue that Appearances is a mostly-true retelling of her life’s events, and that Melanie is a mostly-true version of herself. This established tension, between the real creator and her fictional avatar, gives the story extra oomph from its opening moments. As typical of Mermaid Palace productions, the dialogue is fluid, well-crafted, and faithful to real conversation patterns.

In On China’s New Silk Road, veteran reporter Mary Kay Magistad teams up with local journalists from across five continents to explore China’s global infrastructure ambitions. The podcast’s breadth is astounding, covering everything from China’s heavy investments in Africa, Latin America and Southeast Asia, to the country’s treatment of Uighur Muslims in the region of Xinjiang. Magistad, a former China correspondent for NPR and PRI’s The World, brings a wealth of knowledge to the nine-part series, and she takes no shortcuts in trying to understand the true impacts of China’s economic plans. On China’s New Silk Road, a series about global ambition, is itself one of the year’s most ambitious podcasts.

Enthusiaist! is about the simple pleasures in life. In each short episode, just 5 to 10 minutes long, producer Mark Bramhill finds an enthusiast, someone genuinely thrilled about one of life’s joys, and has them explain their devotion. The topics in the first few episodes include apples, concert halls, and fish sauce, to give you a sense of the far-ranging subjects that may come in the future. So long as someone is delighted or fascinated by something out there, it is fair game on Enthusiast!. Each episode is crisply edited and bursting with positivity. After I finished the first, about journalist Erika Janik’s love of apples, I went out and bought some for myself. Hearing the unbridled excitement and indulgent curiosity of each guest as they discuss the object of their enthusiasm is a real treat.

Kara Swisher’s new interview podcast for the New York Times bills itself as an investigation of power: “Who has it, who’s been denied it, and who dares to defy it.” In other words, this is largely a show about politics. Though Swisher may be best known as a technology journalist, she can also lay claim to being one of the best interviewers working today. It makes sense, then, that she would broaden her guest list past tech CEOs to include major politicians and cultural figures. So far, Sway has featured bracing interviews with guests such as Nancy Pelosi, Elon Musk, and the rapper Killer Mike. Listeners of both Pivot and Recode Decode know that Swisher brings a keen sense of morality to her interviews, as well as a sense of humor. Sway is no different, but it’s great to see Swisher take her skills to an even bigger stage.

Everytown: The Hamptons delivers the story of the Bel-Aire, a Southampton, NY motel that housed a community of Latin American immigrants who make up much of the labor force that fuels the rich enclave. Journalist Charles Lane follows the intense efforts of locals and law enforcement to evict the longstanding residents of the Bel-Aire. This season of WSHU’s Everytown, which debuted back in July, is not just a portrait of anti-immigrant organizing on the local level, but also a labor story, about the way low-wage workers are rejected from the communities in which they live and work.