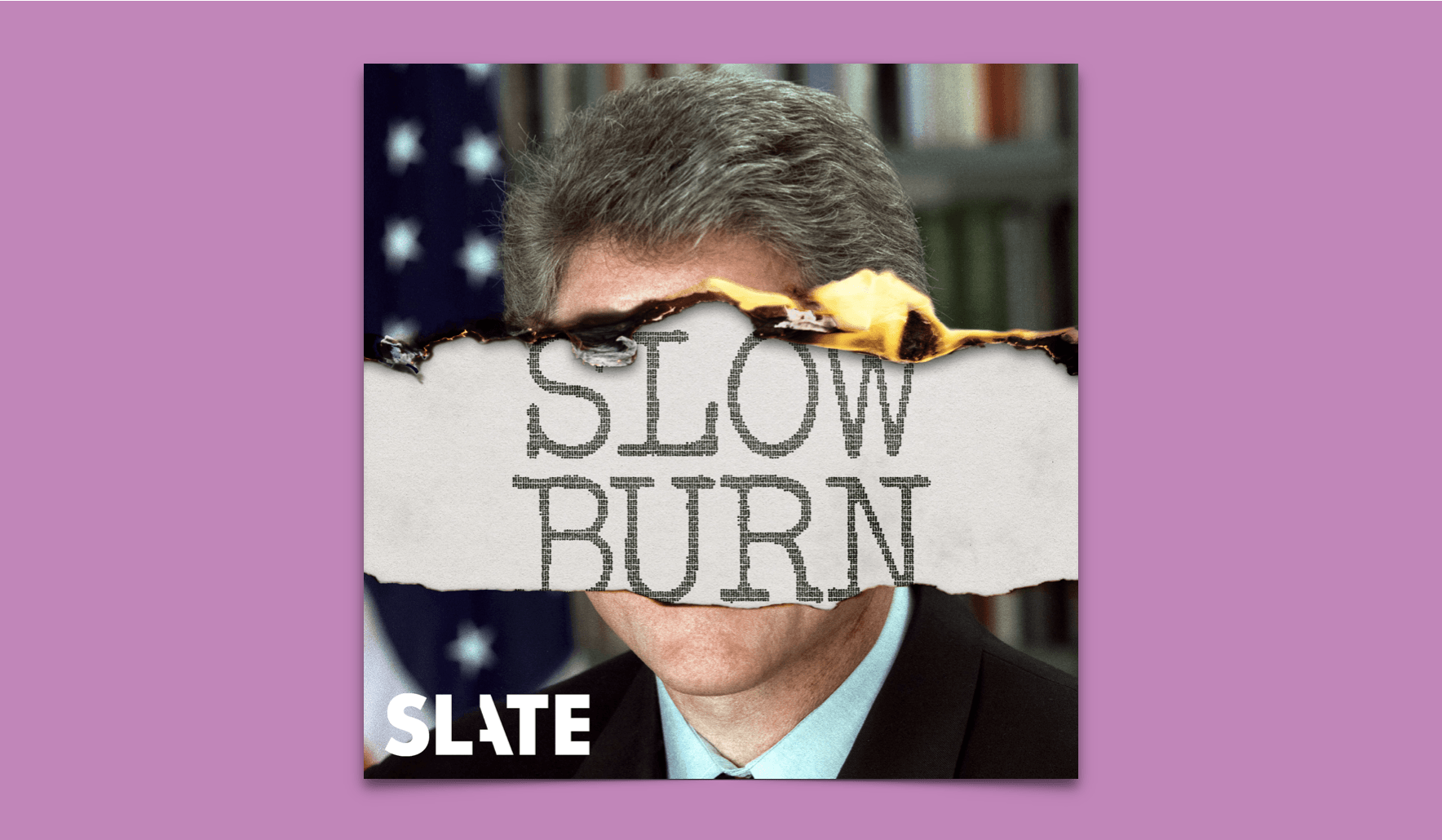 Lately, I’ve been immersed in the story of a White House beset by scandal. I’ve heard the President deny credible sexual assault allegations, attack the independent prosecutor appointed to examine his conduct, and worry about a midterm election that could hand subpoena power to the opposition party, possibly clearing a path to impeachment. I’ve felt appalled by the President’s bald lies to the press and to the American public, and confused by the myriad conspiracy theories swirling around him. I’m not talking about Trump’s White House here—I’m talking about Bill Clinton’s, as narrated by season two of Slate’s masterful podcast Slow Burn, which tells the story of the events that led to Clinton’s impeachment in 1998.

On the first season of Slow Burn, host Leon Neyfakh gave listeners a sense of how it felt to live through Watergate, making the case that the scandal’s slow, devastating escalation resulted simultaneously from high-stakes happenstance (such as the discovery of Nixon’s Oval Office taping system) and our nation’s institutions working as designed to root out corruption. This story has clear relevance to the present day: if President Trump did violate the law during his ascent to the White House, would the public inevitably discover it and would he be brought to justice? Neyfakh never implies that Nixon’s fate can predict Trump’s, and he is scrupulous not to allow the parallels between Watergate and the present day to outweigh the eras’ significant differences. Nevertheless, despite Nixon’s best attempts at obstruction, the Watergate investigation unfolded slowly yet methodically and led to his resignation, which might bring Trump’s opponents hope.

Slow Burn’s second season offers no such comfort. Neyfakh depicts abuses of power and rampant moral hypocrisy from Clinton and his enemies alike, all of which culminated in the President surviving impeachment not because he was innocent, but because the political winds blew at his back. While the Watergate story had clear villains and heroes and a triumphant outcome, Neyfakh depicts the salvaging of Bill Clinton’s presidency as ethically ambiguous. On the one hand, Slow Burn shares the conventional opinion that Ken Starr’s independent counsel probe overstepped its mandate and treated Monica Lewinsky unconscionably, which perhaps justifies Starr’s failure to bring the President down. On the other hand, the show takes seriously Juanita Broaddrick’s credible allegation that Bill Clinton raped her in 1978 and asks whether Clinton’s affair with Lewinsky, a former White House intern, was itself an abuse of power that should have disqualified him from continuing to serve. “I’m left wondering,” Neyfakh admits in the final episode, “if it’s possible to be framed and be guilty at the same time.”

This isn’t an easy position to take, but relishing ambiguity is the strength of Slow Burn’s retelling of the Clinton saga. Each of its eight episodes lands in unsettling places, both morally and intellectually, raising questions that are still subject to vibrant debate today. Are independent counsel investigations partisan distractions from a president’s policy agenda? Can an intern consent to sex with her boss, or does the power imbalance make the relationship categorically coercive? Is it okay to overlook a president’s personal failings if you think his policy agenda is morally, politically, or socially important?

Applying these questions to Presidents Trump and Clinton leads sometimes to divergent responses, but Slow Burn is not trying to entrap anybody or unmask hypocrisy. Instead, the show’s attention to historical detail implicitly warns us about careless weaponizing of the past. After all, despite the many incidental parallels between the two administrations, Trump is accused of colluding with a foreign power to sway an election, which is far more serious than the allegedly corrupt real estate deal that spiraled into the Lewinsky scandal. Furthermore, while Clinton made his share of governing blunders, he had respect for and experience in government, and he wasn’t riling up the Klan. Even Starr and Mueller, despite occupying similar roles, have clear differences in their methods and motivations, which the show’s episode about evangelical Christianity illuminates.

For Slow Burn, then, the useful comparison between the Clinton era and the present isn’t the presidency itself—it’s how Americans respond to allegations of sexual harassment and assault, a topic that Neyfakh treats with decency and nuance. In the episode about feminist responses to the Lewinsky scandal, the show refuses to re-tread the conventional narrative that feminists threw Lewinsky under the bus to save a Democratic president, wading instead into complex intra-feminist debates that remain unresolved today. Neyfakh paraphrases New York Observer editor Lisa Chase identifying a central faultline of feminist thinking in 1998: the inability to reconcile “a woman’s right to sexual agency” with “a woman’s right to be free from sexual predation.” In other words, whether it’s condescending and retrograde to question Lewinsky’s ability to consent to sex with a more powerful partner, or whether insisting on Lewinsky’s sexual agency wistfully erases the real experience of being abused.

The show’s answer is, thankfully, not straightforward—both positions have moral urgency and clear flaws. For example, Lisa Chase admits that her attitude towards Lewinsky at the time of the scandal could have been a projection of her own feelings of power and success. “We didn’t feel like victims,” she says, “so…we weren’t thinking about a victim, maybe to our detriment.” Nonetheless, her charge that feminists infantilized Lewinsky by insisting that she could not have consented to sex rings somewhat true when Linda Hirshman, the show’s main critic of Chase’s “libertine feminism,” references “teenaged girls” in connection to Lewinsky (who was 24 in 1998 and self-possessed enough to withstand an FBI ambush). Perhaps most unsettling is Neyfakh’s interview with Linda Tripp, the friend who betrayed Lewinsky by taping their conversations and handing her over to Starr’s prosecutors. Tripp’s conviction that Bill Clinton preyed on Lewinsky and therefore deserved to be brought down fits the ethos of 2018, but it’s difficult to see her actions as feminist in light of the harm and humiliation to which she subjected her friend, not to mention that her moral outrage cannot be untangled from her political animus towards Clinton.

This debate over sexual agency and abuse is fascinating, in part because the terms have shifted so much in light of #MeToo. For many years, Lewinsky (who declined to be interviewed for the podcast) felt that “owning desire” was a “marker of [female] agency.” But in early 2018, she wrote in Vanity Fair that the #MeToo movement has led her to re-evaluate, without firm conclusion, her own understanding that the affair was consensual.

It would be easy to say that Lewinsky—and the feminists debating her experiences—were either right or wrong in 1998, but Slow Burn refuses to make simplistic moral judgments from the perspective of hindsight. Instead, Neyfakh interviews women who disagree, airing coherent, persuasive, and mostly good-faith arguments that nobody attempts to resolve. This is an urgent reminder that there is no singular female experience or politics, and that dispute among feminists is not a threat to feminism—it is feminism. Women will (and should) vehemently disagree on high-stakes issues, both in the moment and in retrospect as our moral intuitions evolve. After all, while it’s true that many women failed to buttress Lewinsky, rancorous feminist debate was not the root of her problems. The most devastating threat by far came from powerful men and institutions: the Clinton White House discarding her to protect his presidency, federal prosecutors manipulating and intimidating her, and the media publicly humiliating her while she herself remained in legal quarantine, unable to speak on her own behalf.

This season of Slow Burn will disappoint ideologues—those seeking historical fodder to critique or defend the Trump administration, or an unequivocal teardown of Bill Clinton in light of #MeToo. Instead, Neyfakh’s retelling of the Clinton presidency is a sobering reminder that our allies and enemies alike can be villainous, and that even our most earnest beliefs might seem blind in hindsight. But this does not preclude taking a strong moral stand; after all, the show’s finale is a bracing examination of Juanita Broaddrick’s allegation that Clinton raped her, which Democrats minimized and the Starr investigation relegated to a literal footnote. By ending this way, Slow Burn implies that Clinton’s treatment of women should be central to his legacy. And while partisans of all stripes will dispute this conclusion in both good and bad faith, it’s a fight for which Slow Burn prepares us. Politics is a scrum of dissent, abuse, hypocrisy, and incandescent attempts to better our lives. Unfortunately, as Bill Clinton makes clear, all of this is a package deal.