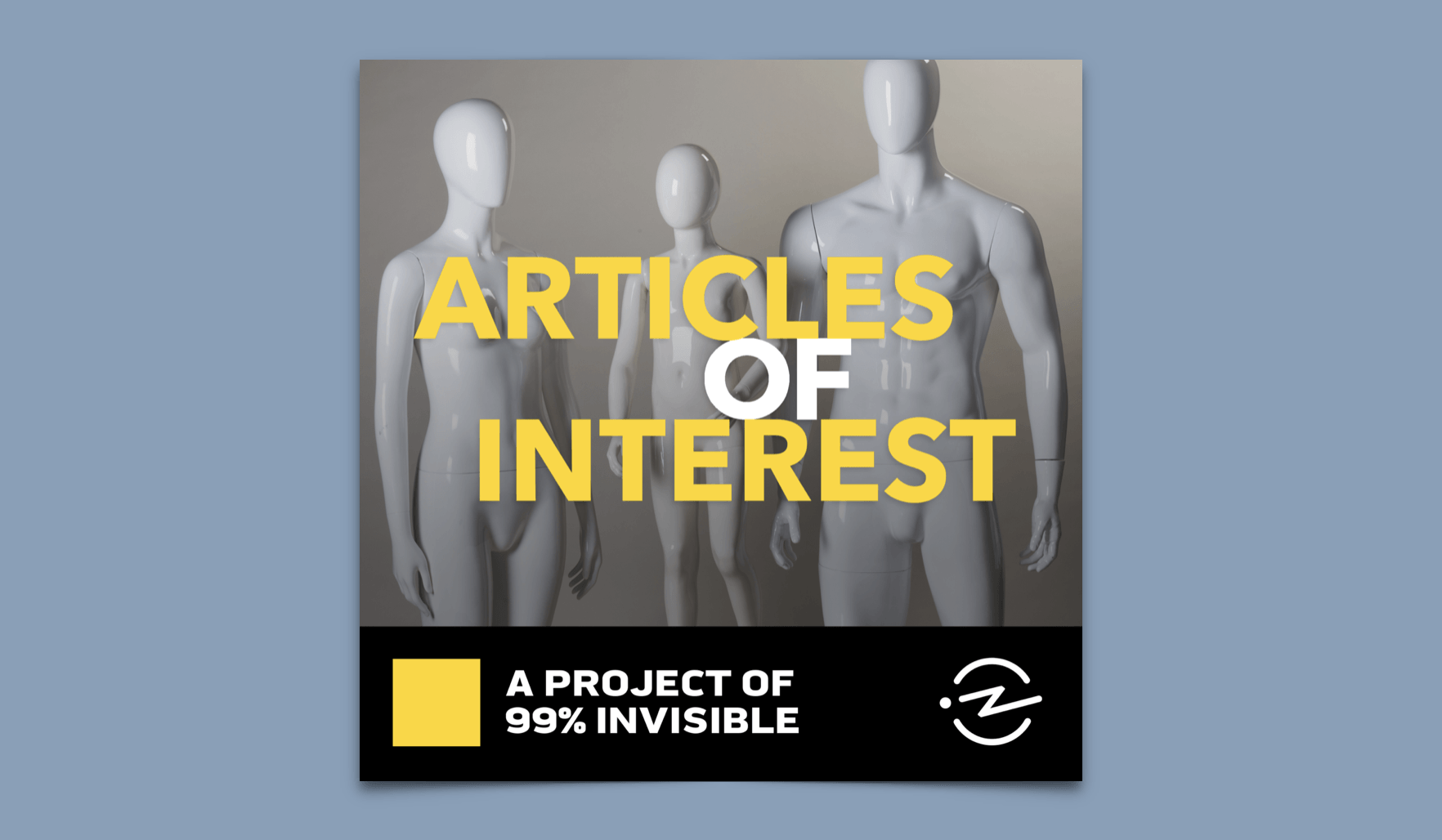 Articles of Interest, the clothing-focused miniseries from 99% Invisible’s Avery Trufelman, begins with a story about the Jacquard Loom. In 18th century England, Trufelman tells us, industrial looms were operated by “draw boys,” young boys who were responsible for adding and removing threads to create each fabric pattern. But in 1804, due to a demand for more complex designs, the draw boys were replaced by the Jacquard Loom, which read thick pieces of cardboard with a series of holes and bumps that corresponded with one portion of a fabric’s pattern. To produce each design, the loom would read connected strings of these cardboard patterns like the rolls on a music box. This development allowed for the faster creation of more complex fabrics and also, we learn, influenced our representation in state and federal legislatures.

In 1890, the American inventor Herman Hollerith adapted the punch cards of the Jacquard Loom to create a quicker way of processing census data. By recording information as holes on census cards rather than written notes about each individual, Hollerith’s technology allowed the U.S. to complete the 1890 census more accurately and in three years instead of 10. This technology later became the main influence behind the International Business Machine’s computing punch card patents. The company, which we now know of as IBM, has played a leading role in computing technology ever since. Like the best 99% Invisible stories, here Trufelman takes a fascinating story in its own right and demonstrates its far-reaching impact on society. What began as a demand for more complex fabrics ended as the computing power that sent us to the moon.

And yet, the first episode of Articles of Interest is not about the Jacquard Loom. This introductory story takes up little more than six minutes, leaving Trufelman plenty of time to explore the episode’s real focus: children’s clothing.

Walk through the kids section of any major retailer, and you’ll confront the mass of sequined, striped, and otherwise loud clothing made for children. (Think of garish yellow t-shirts that state “I’m fluent in sarcasm” in Chiller font). The outrageous look of these clothes, Trufelman explains, is not due to the sartorial tastes of five and six-year-olds. Rather, this is the result of both philosophical and legal history, as Trufelman argues that children’s clothing is a “representation of how much freedom and protection we think children ought to have.”

In previous centuries, it was corsets and long dresses that restricted a child’s movement. But today, this work is being done by legal regulation. Any aspect of clothing that could constitute a choking hazard, a sharp edge, or a cord longer than 3 inches, for example, is forbidden. These are guidelines that have been shaped by the various lawsuits and legal actions that parents have taken on behalf of their injured children. The most stringent regulations, Trufelman explains, involve sleepwear. Sleepwear must be flame retardant and skin-tight and is subject to a host of additional rules to protect children in the case of fires. Fair enough, but this means all clothing that isn’t sleepwear must clearly distinguish itself from those that a child could reasonably choose to sleep in. Which brings us to bright colors, flashy graphics, and brash clothing design that is decidedly not sleepy. This is “decoration as a form of protection,” says Trufelman, defending kids from being caught in flammable clothes and protecting the liability of kids clothing suppliers.

Like this first episode, each installment of Articles of Interest makes a distinct argument about the fabric under Trufelman’s scrutiny. The second episode, which chronicles the history of tartan fabrics, explores how we build and identify with communities, be they queer, working class, or Scottish clans. The third episode details how, as pockets grew more numerous in men’s clothing and developed in utility, they shrunk or disappeared for women. The fourth episode, my favorite in the series, tells the colonized history of Hawaiian shirts and their influence on casual Fridays. And the fifth is focused on Blue Jeans and what they say about our labor.

But it’s in the series’ final episode, “Punk Style,” where Trufelman lays out her manifesto on the importance of fashion in our lives. Punk clothing, Trufelman argues, allowed a set of people to communicate in a world that otherwise stifled their speech. Social groups associated with clothing and style-specific culture — “young people, women, queers, and people of color” — all constitute historically marginalized groups whose voices are not valued, and must resort to communicating visually through the clothing they wear.

All six episodes have shown, in sobering, comic and enlightening ways how clothes (whether they are aloha shirts, plaid fabrics, or t-shirts held together with paper clips) provide space for people in the margins of society to be seen, and ultimately, to be heard. This is the power of what fashion can do, says Trufelman, “something that appears strange, or scary, or expensive at first can trickle down through the cycle of trends, and…expand notions of what is acceptable.” The idea that the clothes you wear don’t mean anything is not only a privilege afforded to those with a voice; it is a myth. Even if we are totally ignorant of the history of the clothes we wear — something listening to the series will make impossible — that history still impacts how we communicate with the world, and how we are heard. The show ends with the statement, “Whether we like it or not, we are all speaking with our clothes. And we might as well give a good hard think about what we want to say.” In its six episodes, Articles of Interest makes you aware that there’s a story behind each garment in your closet, and that, whatever you choose to wear, your clothing will always be sending a message.