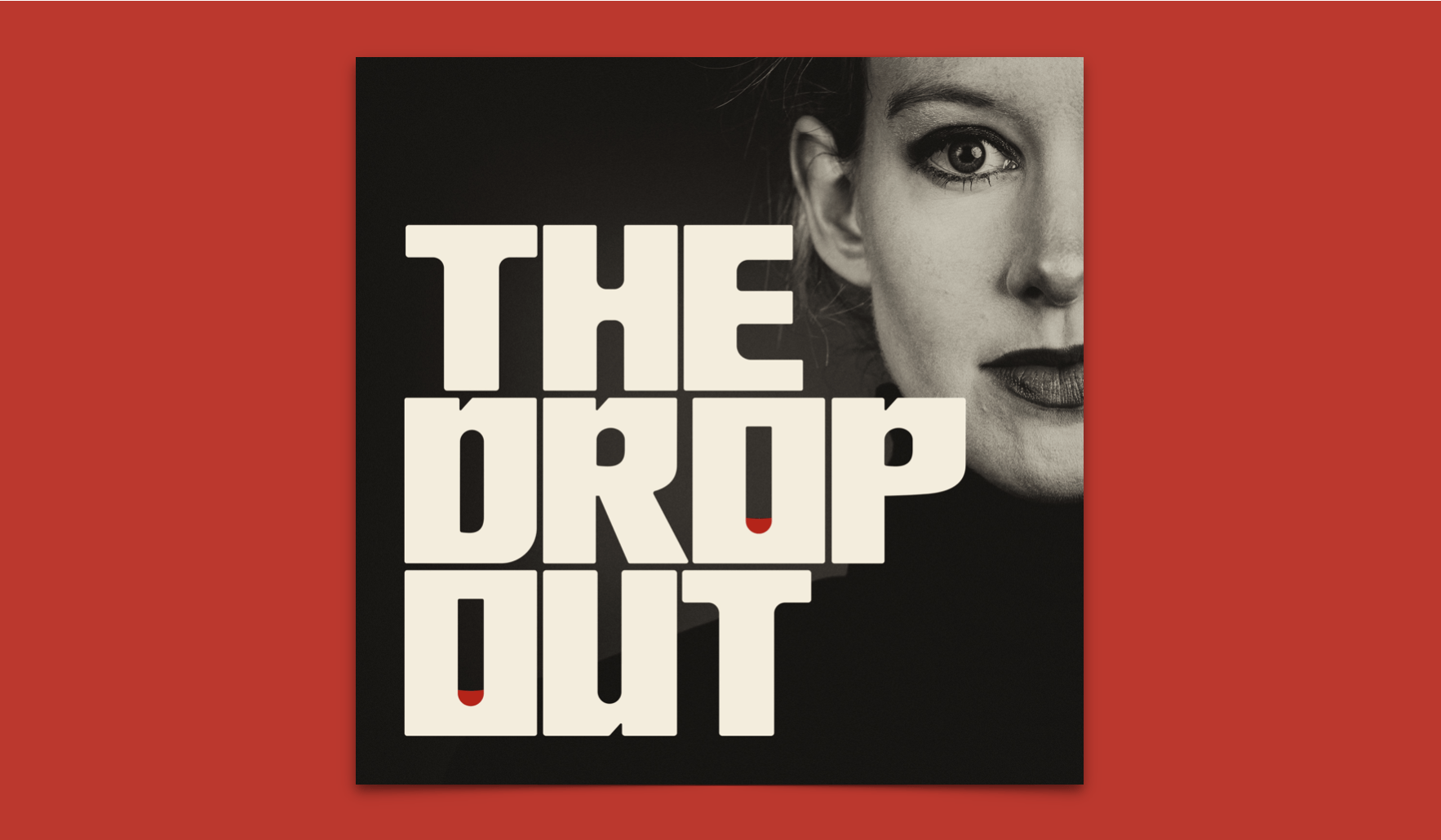 The Dropout could aim for the zeitgeist more than it does. The hit podcast from ABC Radio and TV’s Nightline bears its DNA in its storytelling, which sticks to the reporting and forgoes any editorializing. Though we encounter this type of straight news writing every day, the style is rare in podcasting form, where the narrator’s broader picture-painting and introspection tends to be central. The Dropout succeeds in other ways, opting for a narrow and bulletproof retelling of billionaire Elizabeth Holmes’s big fraud, the blood testing company Theranos, rather than indicting the many wealthy investors who made it all possible.

The show follows the linear path from Elizabeth Holmes’s patrician upbringing, to her short time at Stanford, to the early milk and honey days of the company she started. Holmes, we learn, was brought up in a family that has been gradually declining in wealth for generations, and from a young age she claimed to be determined to change the world. The world-changing idea that came to her at Stanford was a small device that could run over a hundred tests from a microscopic drawing of blood. The lies she told to investors, the media, and the general public in the ensuing years as her company struggled to produce a reliable piece of technology could send her to prison for more than a decade in an upcoming trial.

Host Rebecca Jarvis and her team let the story breathe because, without any stylistic flourish, the story has plenty to tell. An interviewee in the show’s first episode draws a parallel between Holmes and Bernie Madoff in both scale and ambition of fraud. The Dropout is largely the story of the rich and powerful getting duped, fooled by a deep belief in entrepreneurship and the dogma that the best idea wins. The desire of Theranos’s many well-established board members to be a part of something the media might call “life-changing” outweighed careful attention to the basic deficiencies of Holmes’s dream product.

Jarvis devotes the most time to understanding how Theranos existed as a company for 15 years despite the persistent shortcomings of its technology. Each episode introduces us to new employees who joined a company they found inspiring and became disillusioned over the course of months or years. From the early former Apple employees to Secretary of State George Shultz’s grandson and eventual whistleblower Tyler Shultz, Holmes’s employees all wanted to be believers. Also in tow was Sunny Balwani, Holmes’s ex-boyfriend and COO who joined in on the deceiving and will soon stand trial.

The point The Dropout is most interested in making is about Silicon Valley’s natural believerism. Beyond the company’s touting of world-saving capabilities, Holmes did as much as aesthetically possible to establish herself as a genius. She began dressing in the Steve Jobs turtleneck during the early Theranos years, and there’s running speculation throughout the podcast that she consciously modulated her voice to a deeper register as soon as she founded her own company. None of the many employees interviewed by Jarvis approached Theranos with skepticism. Holmes took advantage most centrally of a desire to believe in someone who demanded people believe in her.

Another podcast would’ve found its home in the relationship between Holmes and her board, the millionaires and billionaires who were made to look foolish for trusting Holmes’s outlandish claims. Some of the all-time most hated, like Henry Kissinger and Rupert Murdoch, were involved at different points. Another podcast would’ve doubled down on the ways Silicon Valley and the country’s other power structures work together.

But true to the years of reporting Jarvis and her ABC team have logged on the Theranos fraud, The Dropout is investigative through and through, and it’s the better for it. Some of the best moments in the season come in the later episodes when Theranos’s failures become headlines, and we hear Jarvis’s on-air interviews from that time. Jarvis’s genuine grilling of Theranos investors and layers is thrilling, and offers a glimpse into the years of patience and follow-through that ultimately revealed Theranos on the reporting side.

The story is well-timed, with criminal charges arriving last year and a trial looming in the future. If the show stumbles, it is in its finale, when the story has been told and it is left to speculate about the trial’s outcome and reflect on what in Holmes’s personality led to this catastrophe. At moments, the show’s psychoanalyzing of Holmes nearly approaches admiration, a tone divorced from the rest of the season.

The story is not over culturally, either. Director Adam McKay has decided to make Holmes the subject of his next explainer/thriller, with Jennifer Lawrence on board to play the main part. Whether The Dropout wanted to make Holmes the story of the inherent dangers of amassing wealth and a Silicon Valley-DC partnership, the McKay movie is sure to play on such ideas.

The fact that ABC Radio was able to deliver such a slim and well-tuned podcast deserves attention. With obvious exceptions, many of the biggest news institutions in the country have not yet gone all-in on podcasting, and ABC News may have found its niche in sharpening and expanding upon reporting it has already done. The Dropout should be a guide for other mainstream outlets trying to navigate their way into limited series podcasting.