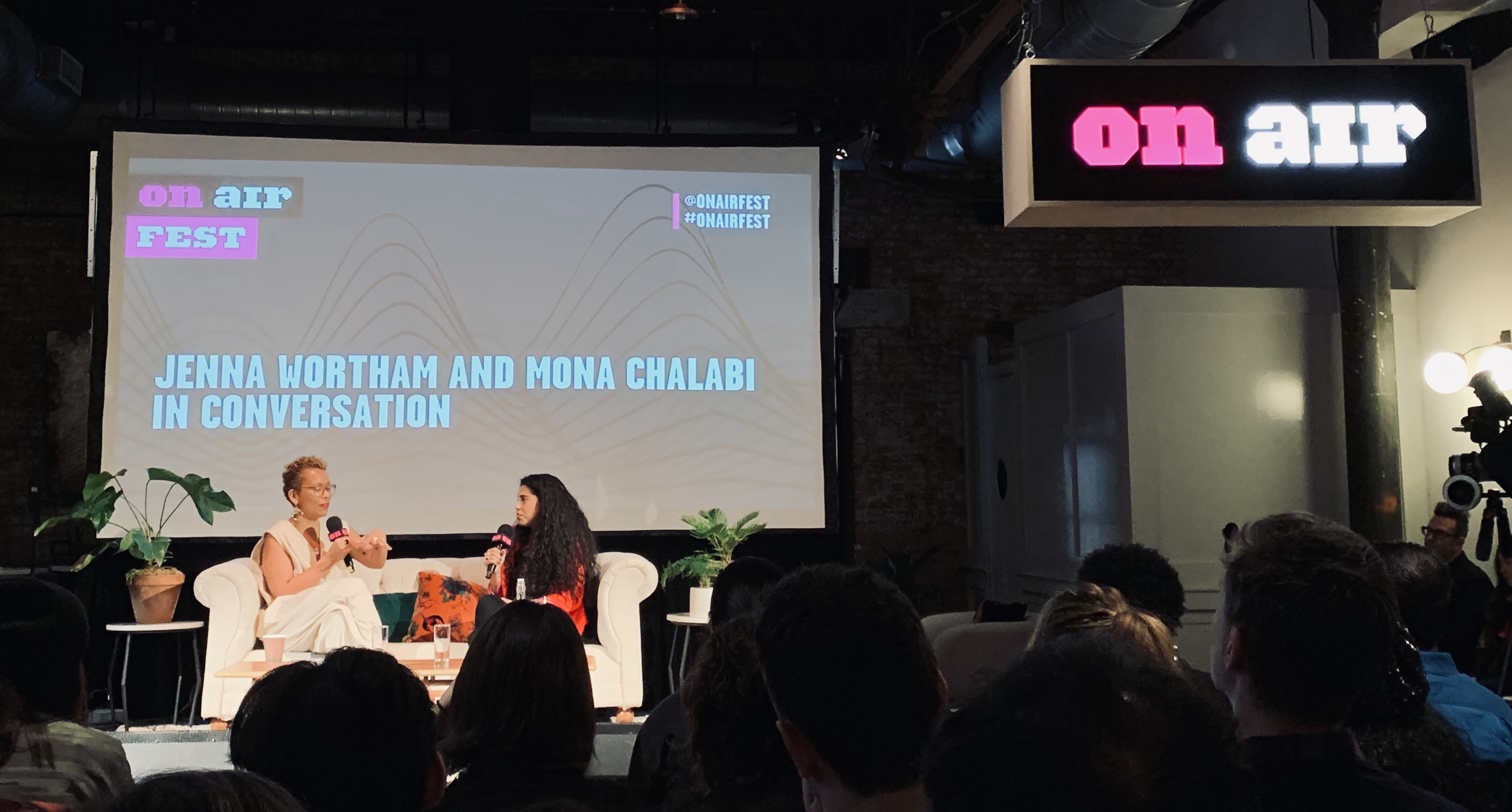 For the second year in a row, Podcast Review joined much of New York’s podcasting industry at On Air Fest, the three-day audio event that wrapped up on Sunday. Panels, conversations, and live interviews across the weekend managed to pack full houses at Williamsburg’s Wythe Hotel. The mood was enthusiastic and encouraging, as attendees, many of whom identified themselves as independent producers, celebrated and took notes on the wild directions creators are taking the medium.

This year’s festival made an effort to expand beyond podcasting into the broader world of audio art. The expected hosts and producers of popular shows were joined on the line up by audio archivists, ambient musicians, and video creators. The challenge for an event like this one, a challenge On Air handles well, is to balance the desire of attendees to hear about and trade technical audio knowledge with stage acts that attract those who don’t make podcasts for a living. Friday morning’s opening event, a live edition of The Slowdown, hosted by poet Tracy K. Smith, made clear the impressive range of artists On Air can attract and fit into its mission.

Our coverage of the festival kicked into high-gear on Saturday morning with “Saving the Sounds of Brooklyn,” a panel of archivists and researchers attempting to preserve Brooklyn’s storytelling history. “Oral history isn’t journalism, it’s story-listening,” said Zaheer Ali, oral historian at the Brooklyn Historical Society. Perhaps more than any other event, “Saving the Sounds of Brooklyn” proved the value of On Air’s decision to include non-podcast discussions, given the incredible value of such projects for anyone who seeks to make a compelling podcast.

A highlight of the weekend followed, with a live edition of Debbie Millman’s Design Matters featuring Roxane Gay. Millman and Gay covered an incredible amount of ground over 45 minutes, detailing the ways Gay’s thinking has changed over the course of her career. “The way I measure strength is the way in which we endure,” Gay told Millman following a question about the word “strong” itself. “Do you endure boldly or not? Strength is about having self awareness to have made mistakes and failures.”

A trip to the Wythe’s upper levels on Saturday led us to the “Machine of Unfamiliars” and “Spatial Relations Durational,” two of On Air’s most experimental entries. In “Machine of Unfamiliars,” Love + Radio’s Nick van der Kolk offered his “automatic secret generator,” a collection of first-person confessions, video and all, exhibited in an otherwise empty hotel room. Next door, the indie musicians Peter Silberman and Nicholas Principe performed an ambient score, which I found spectacularly relaxing, for most of the afternoon.

Later that day, one of audio’s most dedicated innovators, Kaitlin Prest, took the stage to discuss the makings of her fiction podcast, The Shadows. The process Prest undertook to make The Shadows the living and breathing thing it is deserves its own feature. “We made it sound real by making it sound imperfect,” Prest told the audience, while showing clips of her physical performance of the audio fiction. We were lucky enough to sit down with Prest after her performance, and that interview will post on our site soon.

Sunday’s discussion between Jenna Wortham and Mona Chalabi brought together two journalists who take the information they uncover in transformative directions. For Chalabi, that means turning data visuals into written reporting, and for Wortham these days, that means turning critical essays into best-culture-podcast-candidate Still Processing.

The above is just a sampling of the many creators who took the stage of the Wythe Hotel’s Main Hall. For the second consecutive year, On Air was a harbinger of optimism for New York’s podcasting world. The good energy and encouragement flowing between attendees and special guests served as a reminder that despite the hundreds of millions of downloads, the audio world has the advantage of, occasionally, still feeling small.