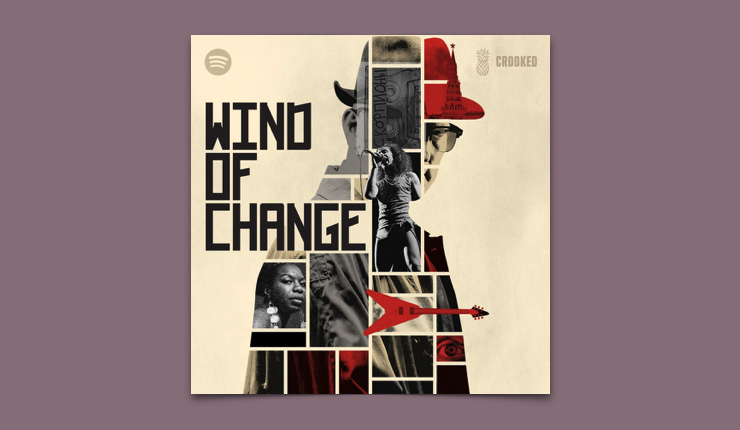 In 2011, journalist Patrick Radden Keefe heard from a friend who heard from someone else who heard from someone else that the C.I.A secretly wrote a power ballad for the rock band The Scorpions. That might seem like a flimsy premise for an eight-part podcast, but apparently Pineapple Street Studios, Crooked Media and Spotify did not think so when they joined forces to produce Wind of Change. The series traces Keefe’s investigation into whether the C.I.A could have written the German band’s “Wind of Change,” a song that ultimately became a sort of anthem during the Cold War.

Investigations with dubious premises are no stranger to podcasting. Pineapple Street’s own Missing Richard Simmons set out to learn what happened to the fitness instructor Richard Simmons despite his expressed desire to be left alone. Wind of Change isn’t harming any specific person per se, but as Joshua Keating points out in Slate, the show focuses on a story that is so juicy it is bound to be repeated as fact. Keefe himself recognizes that the more a story is repeated, the more people will believe it. Regardless of what the investigation uncovers, Wind of Change irreversibly introduces a new conspiracy to the cultural consciousness.

And what the investigation does uncover is about as tangible as the meteorological phenomenon that lends its name to the Scorpions’ song. Beyond the initial thirdhand rumor, we hear some evasive answers from questionable characters, a story about a strange encounter between Scorpions singer Klaus Meine and a C.I.A. agent, and a lot of examples that suggest that working with a rock band is the type of thing that the C.I.A. could have done. Nothing, however, actually points to the C.I.A.’s hand in the writing or distribution of “Wind of Change.” The team does a good job at making the story seem plausible, and dresses it up with slick production, but a plausible story without evidence is still a story without evidence.

To be sure, Keefe looks hard, often in entertaining ways, to find proof of the C.I.A.’s involvement. He travels around the world for interviews, and carefully studies the reactions of his interviewees, casting a wide net to find any link he can between the Scorpions and the agency. He spends thirteen minutes in one episode chasing a man who mixes G.I. Joe parts together to create new characters because the man once wrote a post on a G.I. Joe forum about his custom-built Scorpions G.I. Joes and fancifully suggested the band worked for the C.I.A. It’s an amusing story, but like many of the stories in the show, it gets us nowhere closer to understanding whether or not the C.I.A. wrote the song.

That example also hints at what is perhaps most frustrating about the transgressions of Wind of Change: the show is a lot of fun to listen to. Episodes open with stories that bring the listener from the world of illegal drug smuggling, to the Republic of the Congo (where a war paused for a visit from Louis Armstrong), to Soviet hotels filled with American rockstars in the midst of the Cold War. We meet charismatic figures in the world of espionage like an expert on spycraft whose mansion was built with 36 secret rooms, and a former C.I.A. spy who once showed off new espionage technology by visiting George H.W. Bush in disguise. If Wind of Change wasn’t so insistent about the “Wind of Change” conspiracy, it might have been a really good podcast.

By now it is a cliché to point out that we live in a time when the very meaning of truth is being questioned. Media outlets, constantly facing charges of being “fake news,” need all the credibility they can get. A story like this, from prominent podcasting networks, and from Keefe, who writes for the New Yorker, either undermines the credibility of those outlets, or else it emboldens people prone to making unfounded assertions.

Those flaws might be excused if the podcast meaningfully engaged with them and offered a nuanced reflection on the nature of truth. Though Wind of Change does attempt to examine truth, these moments of reflection are somewhat of a mixed-bag. The show touches on interesting themes, like in episode two when it talks about the similarity between a C.I.A. agent’s performance of identity and an entertainer’s performance. More often than not, however, the podcast brings up its shortcomings without offering to make up for them. Keefe talks to one interviewee, for instance, about the danger of spreading a story about the U.S. interfering with Russian politics at a time when the Russian government has been criticized for manipulating U.S. elections. But Keefe doesn’t dwell on the claim and doesn’t really say anything to defend himself from the charge.

Perhaps the most telling example of the show’s thoughts on truth comes near the end of the series, when Keefe tells a journalist that he works with in Russia about his project. “It sounds stupid,” she says when he explains it to her. But as the conversation continues, Keefe’s research pays off, and he explains the story of how the C.I.A. distributed the book Dr. Zhivago in the U.S.S.R., a fact that gives the journalist he is talking to pause. Keefe continues, “If you allow your brain to go to that place, then suddenly, you’re like, ‘Well, what else should I be believing?’” They then share a laugh about how maybe they’ve been trusting the wrong people this whole time. It’s a fair, if somewhat banal point to say that conspiracy theorists don’t trust anyone, but Keefe isn’t finished reflecting.

He goes on to explain that in Russia, disinformation leads to cynicism, which leads to apathy. What’s notable is that if the “Wind of Change”-C.I.A. connection turns out to be false, then that progression is almost exactly what he has tried to put the journalist he is talking to through. By the end of the conversation, she sounds resigned to the “Wind of Change” conspiracy. “The C.I.A. just wrote one of the greatest songs of the 20th century, fantastic,” she deadpans. But instead of explaining why his podcast of potential disinformation is better than Russian propaganda, Keefe seems satisfied to say that maybe it isn’t.

The show, to its credit, has the self-awareness to suggest that there is no reason we should trust Keefe either. A charitable listen of the series might argue that the podcast was made with a questionable premise because its team wanted to hammer home the idea that you shouldn’t trust anyone, the creators of Wind of Change included. But there isn’t much in Keefe’s attitude that would lead us to believe that his narration is accompanied by a knowing wink and nod. Though he does, at times, express that he thinks the story is lighthearted and mostly harmless, Keefe also travels to Germany and presses the lead singer of the Scorpions about his involvement in the C.I.A. He might laugh about the theory, but he certainly takes his mission seriously.

I don’t necessarily think there is a problem with allowing your brain “to go to that place,” but the question is about when you should do so. It’s definitely possible that the C.I.A. could have been involved with a hit song in one form or another. But when Keefe starts connecting conspiracy theories and broadcasting them to the world, it affects more than just him. Plenty of people love to play spy. I, for one, would love to have a house with 36 secret rooms. The problem is that Wind of Change doesn’t know when to distinguish that game from reality. The series is an entertaining ride, but its commentary on truth is flawed at best. If its goal is to provide us a story that we should listen to with skepticism, it succeeds. But in the year 2020, we don’t need any more of those stories.