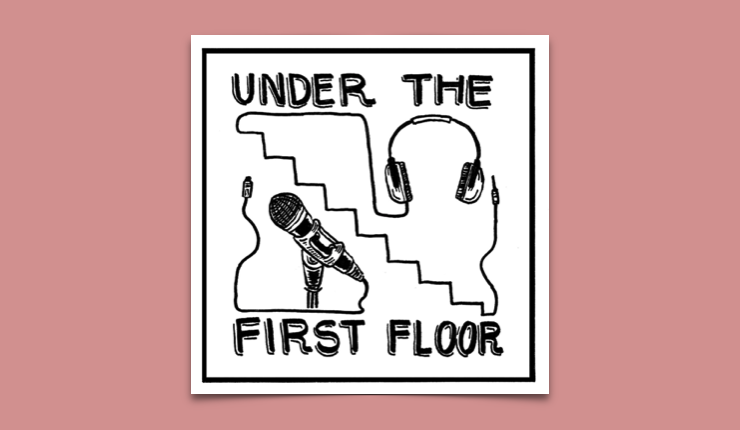 (Credit: Under the First Floor)

In the mid-2000s, when podcasts were mostly made by amateurs in their spare time and radio corporations testing out the waters, I used to listen to a podcast of live concerts from NPR’s All Songs Considered. As a teenager who didn’t use Myspace, and thus missed out on its large and influential music community, these broadcasts from Washington D.C.’s 9:30 Club were my introduction to the world of people who make, record, and tour music.

There is something special about finding a new band through a live performance. Even a bad one can sound honest and energetic, like the capture of a specific moment, one that hasn’t been constructed from multiple takes and run through an effects rack. I found myself thinking about this period of my life again while listening to Under the First Floor, an independent podcast of live performances and interviews recorded in Philadelphia.

The show’s Philadelphia home is an important aspect of this. In the last decade, the city has become synonymous with a certain type of politically progressive guitar rock that picks up on ‘90s indie movements like DIY, lo-fi, and Riot Grrrl, and combines them with a poptimism and celebrity-culture consciousness. Many of the bands documented by Under the First Floor reside in the city, and their music draws from that milieu. Settle himself is a transplant to Philadelphia from the much smaller scene of Tallahassee, Florida (detectable in his soft accent and his fondness for saying “y’all”).

My family has a long history in the poorest big city in America, and I still live in its suburbs. I watched the explosion of interest in Philadelphia over the last ten years with ambivalence; at times, it’s an uncomfortable experience watching the place where you grew up become estranged through other people’s dreams and desires. Which is to say that, upon first glance, I was skeptical of Under the First Floor.

But the podcast is an honest attempt to draw a map of precisely this group of young, well-meaning gentrifiers. In an era where every cultural artifact seems to be monetized, it is endearing to hear a show without commercials and which features small-stage acts with local politics. Indie music has long been accused of insularity, but it’s the fact that Under the First Floor leans into this insularity that makes it such a unique document. The podcast’s interview segments — two-minute clips spliced between each song in a band’s set — are not deep conversations about the meaning of the music. Instead, Settle’s background as a musician leads quickly to granular discussions of technique, routine, and influence, mixed in with comedic minutiae. The result is a diary of a small region of music makers that has no pretensions.

Until recently, Under the First Floor carried the tagline “shitty recordings of bands you should like,” a reference to the show’s defining piece of equipment, a TASCAM 4-track recorder, on which Settle records the show and mixes each episode. It’s rare to find a podcast with this kind of flat and saturated sound. But this sonic texture is part of the show’s appeal. To call the quality “shitty” is likely meant to be modest, but the truth is that Under the First Floor is well-engineered by someone familiar with his tools.