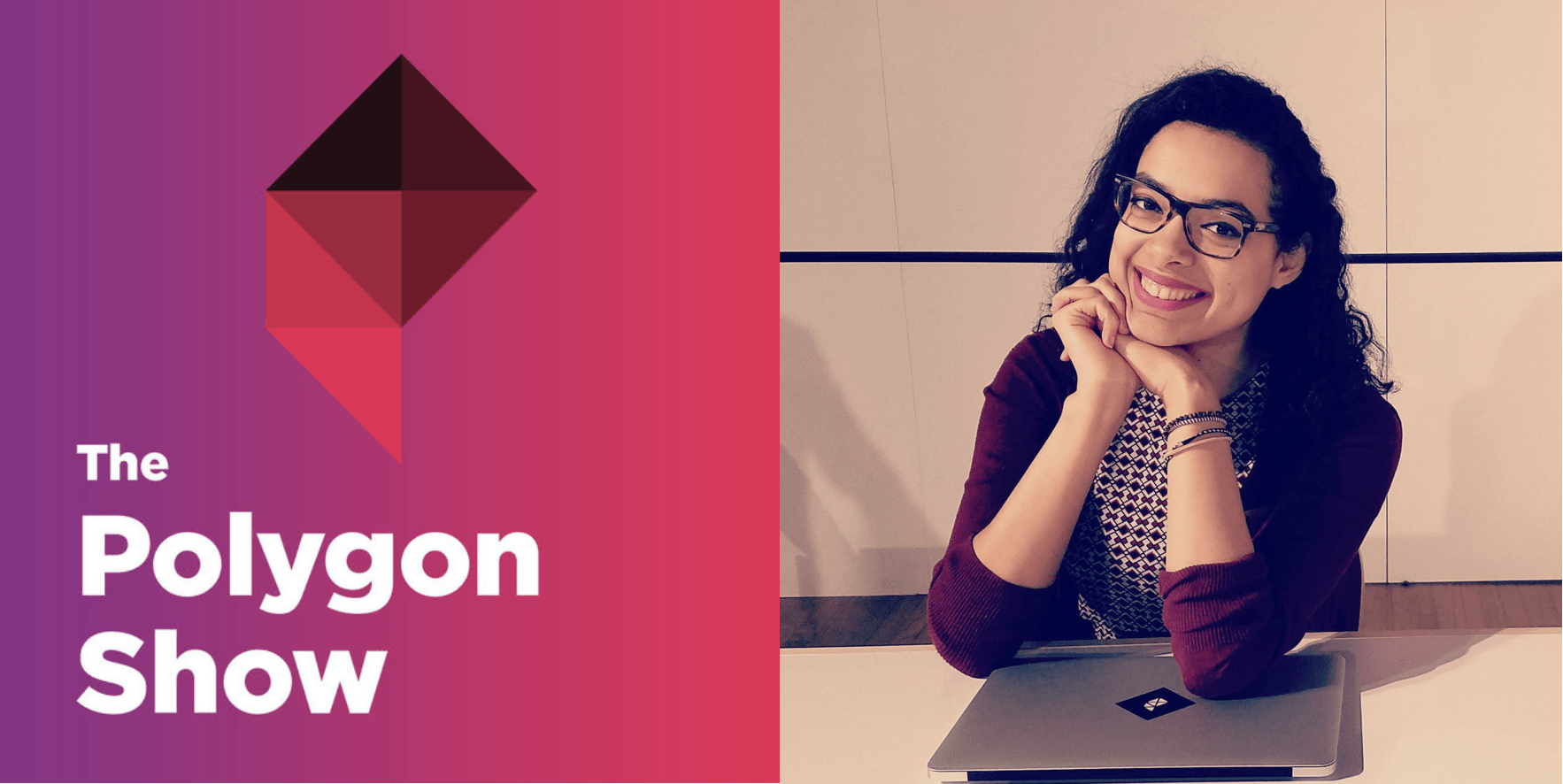 Allegra Frank is Deputy News Editor of Polygon, the popular gaming website from Vox Media, and a co-host of both the site’s flagship news podcast, The Polygon Show, and The History of Fun, a weekly podcast that explores the backstories behind everything from Neopets to water parks.

Because of her age — she is just 24 — Frank’s co-hosts sometimes call her “Baby Allegra.” But it might be more fitting to call her a prodigy. Given her central role in creating two of Polygon’s most prominent podcasts, I was curious to learn more about Frank, her path into radio, and what it’s like to be a woman of color in games journalism.

In addition to being an editor at Polygon, you host two podcasts. Did you always have an interest in podcasting?

When I was in college, I was really big into radio. I ended up being the manager of my college’s radio station and I had a show there all four years. My show wasn’t just me playing the music I liked. It also involved me talking into the microphone, chatting with friends and taking callers. Though I was really shy, I found myself far more able to speak up when I was in the radio booth, talking on air. So that was something that was really important to me.

When I came to Polygon, we already had a few podcasts but many of them would start and then implode after a short time, so we wanted to reset and start a flagship podcast. The idea was brought up by Justin McElroy. He gathered the four women on staff and pitched it as a podcast on news and the games we we’re playing, saying, basically, “You guys are really funny together.” As someone who was doing that on a weekly basis before, it sounded really awesome. It sounded like something I knew how to do and would feel comfortable with, especially as I gained more confidence working in this field.

How do you manage such a wide variety of roles? And do you have a favorite of the podcasts you host?


Honestly, it’s kind of innate for me at this point. I’ve never been a performer, but I think in trying to build up my own self confidence it was very much, OK, “Turn it on,” “Fake it till you make it,” that sort of thing. It also helps — as an editor and former reporter — that a big part of my job is doing interviews. I’m pretty used to having conversations, which is obviously relevant to hosting a podcast.

In terms of managing it all, each podcast takes a certain amount of prep work, but The Polygon Show is a bit easier. I just have to think, what am I playing and what’s my angle? The History of Fun, on the other hand, takes a lot of research. I’ll spend hours doing research for that show. It feels like a homework project I do every couple weeks.

As for a favorite, The Polygon Show is probably the podcast I’m most proud of, because it’s four women and we have a lot of female fans and listeners. It always feels really awesome when a young woman comes up to any of us to thank us for what we do.

For a lot of people, video games are something fun to play after coming home from work. But for you, games are your work. How do you manage those boundaries?

It was hard for a while. When I first started at Polygon, I felt like I needed to play more games just to re-acclimate myself. I really enjoy games, and I want to communicate that through my writing. But I got this job right after I graduated from college, and in school I had no money and no time, so I didn’t really play much other than Animal Crossing and Pokémon. Once I started doing more reviews and original reporting, I really had to think, like, “I’m playing this game. What can I pull away from this that’s original?” But sometimes you also just want to enjoy a thing and not get stressed about it.

When I play with friends, I definitely see it as hanging out and just playing games together. Even if it’s me and one other friend, I think of it as friend time where I’m not working. I generally have to make a conscious effort to establish those boundaries and it’s the easiest if I play things with other people.

Because of how young are, you’re often referred to as the baby of the shows you host. How does that dynamic play out? What perspective does your age give you?

Yeah, everyone in the office calls me Baby Allegra, too. I just try and make something out of it when I’m offering my perspective. Like, I do have different cultural touchstones than people older than me. I’ve never owned a Super Nintendo or an NES or a Sega console. I started with a Game Boy Color, moved onto the N64 and then the GameCube. I think it’s helpful because a lot of our audience is younger. I think about how I can relate to them, and on that level I’m happy to play up Baby Allegra. That said, I also know that I’m articulate and smart enough, and can point to the fact that I’m an editor at age 24 so that people can take me seriously. You know, I’ve done my research. I can speak up for myself.

Could you speak about your experience as a young woman of color in the video games industry?

It definitely affects how I approach my job. People often come to me for cultural sensitivity checks and that sort of thing, which I’ve never really experienced before. This is the first time I’ve worked with predominantly white men, whereas growing up most my friends were also biracial. It’s really made me try to learn more about my identity and take more stock in it. I definitely try to look from that perspective when writing, reading, and offering my thoughts.

With The Polygon Show, it’s really important to me that other women of color enjoy the show and can see a person who looks like themselves doing this kind of work. I know when I was younger that would have meant a lot to me. So I try to bring that perspective into what I do. I try to hone in on those particular experiences. There’s just not that many of us, so we do need to find solidarity within the community of games journalists and fans. It can be tough sometimes, but I try to use it as a confidence boost. I’ll be surrounded by these 38-year-old men wearing cargo shorts and game shirts, while I’m wearing a blazer and asking hard questions. But I’ve become more comfortable with it as time has gone on.

Do you have any advice for women of color who want to work in games journalism?


For me, it’s always been about asserting yourself. I have a lot of insecurities and anxieties. I always have. But I’ve gotten better at taking care of myself. I just kind of walk in and play these games now. I know as much about Metal Gear Solid as you do, and I can probably beat you in Pokemon right now, whatever. But even before I started, I felt confident that I like games and that no one could take that away from me. I’m well read, I’m confident about these things, and I know I can write. So if you’re a woman of color, just show up and assert that you deserve to be there. There’s no one who can tell you that this isn’t a place for you. Luckily, people are more aware that we need that kind of diversity now. They’re a little more open-minded to finding people who don’t just look like the the standard, staid vision of a games nerd.

Lastly, do you have any advice for people who are generally interested in podcasting and radio?

I would say just do it. Just find ways to do it. Bring a friend, start talking into a microphone and don’t be shy about it. Have conversations with people and assert yourself as a talented person who knows what they’re talking about. Consider this another way to articulate your expertise and learn how to talk about it. There are definitely radio stations that are open to the public and smaller places that have broadcast time on the airwaves. I have friends who’ve done that and it’s a really good opportunity to get practice. But even doing Twitch streams, recording yourself talking, goofing around with friends — these are all great ways. It takes time, but I don’t know anyone who hasn’t gotten better with practice.

Ana Diaz is a writer and gamer based in Saint Paul, MN