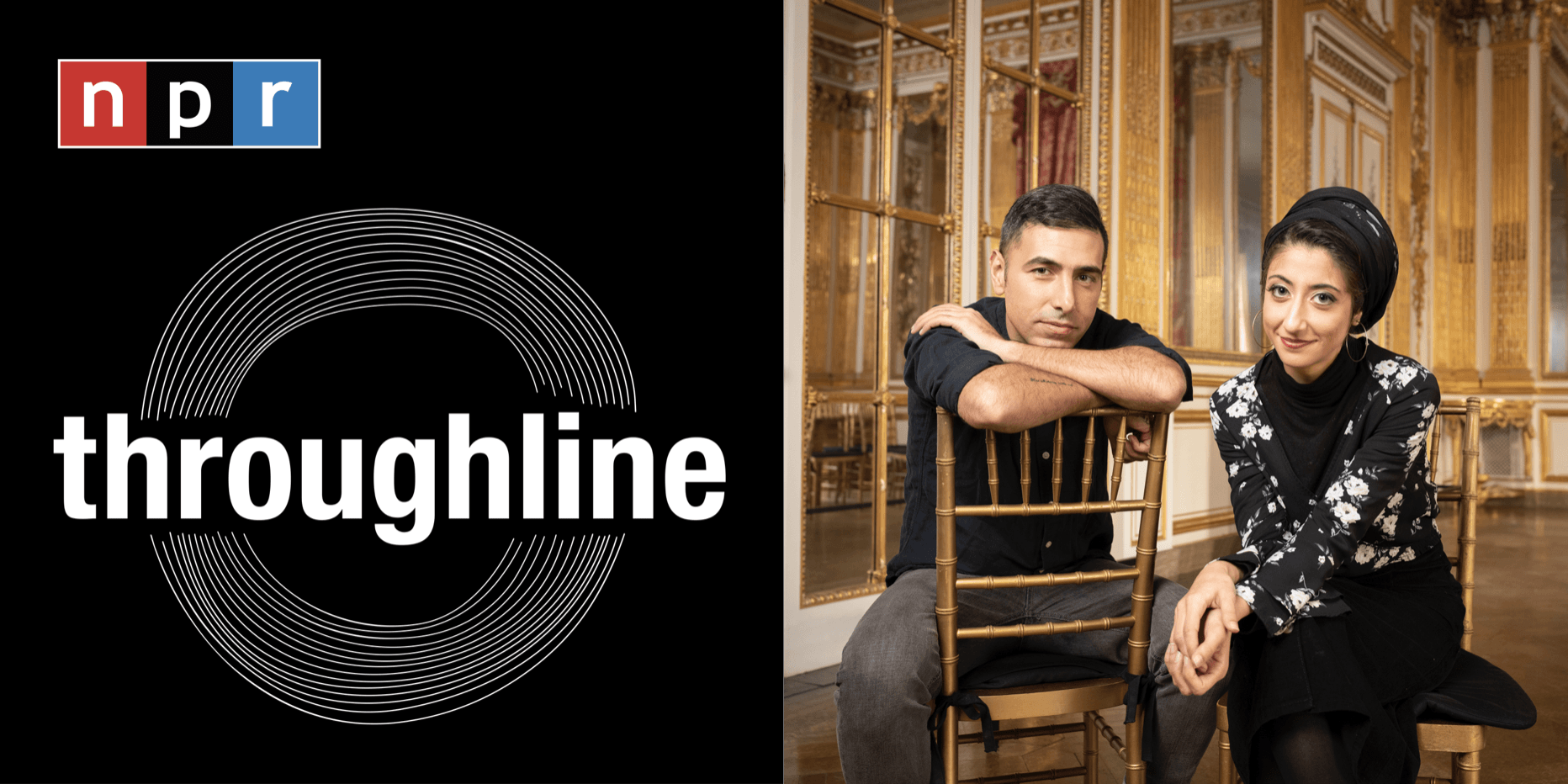 At a time when podcasting has been feeling increasingly corporate, with celebrity hosts and flashy marketing campaigns, NPR took a chance on two young in-house producers to develop a show on a not-so-flashy topic: history. First-time hosts Rund Abdelfatah and Ramtin Arablouei bring their wit and personal experience to the forefront of Throughline, a weekly podcast covering a broad range of both foreign and domestic topics.

Throughline launched earlier this year, starting with an episode about the 1953 CIA-backed coup in Iran, and has since covered the histories of the Korean War, Sunni-Shia conflict, and the militarization of the U.S.-Mexico Border. Abdelfatah and Arablouei certainly have their work cut out for them, producing the first history podcast from NPR, but they have so far approached the task with an infectious enthusiasm that has us deeply excited for the many episodes to come.

I spoke with the two hosts about the show’s origins, how they decide what topics to cover, and to what extent they think their project is political.

What was the process of getting the show off the ground? How did you pitch it?

Arablouei: I first came to NPR to help start the show How I Built This with Guy Raz. Guy and I realized pretty quickly that we needed additional help, so we brought on an editor and hired Rund on as a producer. Rund and I became friends and not that long into knowing each other we began talking about how we wished there were better history podcasts, because we always thought there wasn’t enough historical context in the news. We went from complaining about it to thinking, like, maybe we should make that show.

Abdelfatah: Yeah, providing context was a big part. We also kept asking ourselves, why do history shows necessarily have to be boring? We thought we could produce historical stories in a more interesting way. So that was also part of our thinking too, that we could do this better.

Arablouei: So we went ahead and it took us a month to make the first episode. We showed it to Rund’s boss at the time, Izzi Smith, and he was like, “We always talk about what the future of NPR is going to be, and I think I just heard the future.” Which was obviously very encouraging.

Abdelfatah: From there we entered our show into the NPR Story Lab. We were doing this on top of our regular day jobs, producing for How I Built This and TED Radio Hour, and I must say, it’s not a small thing to convince a whole company to get behind you on something, especially since when we’d never hosted anything before.

Arablouei: It was an uphill climb. We weren’t reporters and we had never even been on air, but they saw potential in the show. And whenever we did get pushback, it forced us to figure out what this show was really about.

Why are you two passionate about history? Why is it important now, and why from NPR?

Arablouei: We both think something that’s lacking in Western culture, probably more so in America than in Europe, is a sense of and an appreciation for history. You know, the last time I was in Iran I had this long conversation with someone about Iran and the US. He said people in the East never forget and people in the West never remember. That stuck with me because I think it’s a fundamental cultural difference. We always felt frustrated about that, and we thought there needed to be someone contextualizing all of the news that was happening, in what feels like a very tumultuous moment in American history. It’s really important to understand why these issues are coming up and what got us to this point.

Abdelfatah: There were these large gaps in our knowledge about all of these important events, and if we felt that way, we thought others did too. The swirl of 24/7 news doesn’t give you enough time to sit back and process any of it. Our current news cycle makes it difficult for anyone to have the time to figure out why events are playing out as they are.

Do you think of your project as at all political? When we say that people in the West don’t remember, that’s not always an accident.

Arablouei: That’s a great question. Well, one of the reasons why we reached out to NPR — beyond the fact that we work here and that we love and believe in it — is that NPR still has credibility in this polarized news landscape. We felt from the beginning that this show should not take a political side. What it should do is explore things as objectively as possible. Of course, everything is subject to subjectivity, but generally we try to come at things in as fair a way as possible. So that’s the first part of my answer. The second is that I have different theory. The reason why people don’t remember in the West, I think, is that in general the winner tries not to remember, because becoming the winner often involves bad things happening. When you’re on the losing end, when you’ve felt victimized, you want to hold on to that.

But look, everything is political. Ultimately our goal is for any listener who tunes in to get a better sense of the past, so that they can make their own mind up about how to look at today’s issues. We would hate to see more people picking political positions without having a sense of history, because that means they’re making decisions from a place that’s not as full as it could be.

Have you gotten any responses along those lines, calling the show too political or too apolitical?

Arablouei: Yeah, we have, and I knew we were doing it right when we started getting pushback from both sides. Our first episode was on the 1953 coup in Iran. We got some people saying, “oh, you let the British and the Americans off easy. You didn’t talk up about all the horrible things the British were doing in Iran.” And then I’m hearing other people say, “This is just leftist, anti-American propaganda.” It was like, if we’re getting it from both sides, I think we did a good job. And in the end, that’s all we can hope for. We don’t want to be doing a show that’s politically liberal or conservative because I don’t think that’s going to serve our mission.

Abdelfatah: Even when it comes to picking topics, we are very conscious of trying to cover things that are obviously in the current zeitgeist, but we are not only trying to do political histories. We’re doing histories this season around music, around technology and around sports, around all of these different areas. We want the show to help us better understand why what is happening today is happening. That involves politics of course, but it’s not limited to that and we’re really trying not to limit the show to that either.

In general, how have you been deciding what to cover?

Abdelfatah: Well, first off, we have a team of really smart people. We meet every week and talk about what’s on everybody’s minds, what’s on the news, and what’s going on in the general conversation. There’s also a very intentional effort to look at what anniversaries are coming up. But really the biggest thing is enforcing a diversity of topics, a diversity of places, with a pretty equal number of domestic and international topics, and not focusing exclusively on political histories. We want to make it so that you don’t know what you’re getting every week, but that altogether you’re getting a better sense of the world.

So it’s a healthy balance. Last question: what has been your favorite story to work on so far?

Arablouei: We did an episode on the history of the opioid crisis in America, and it’s dark but I really liked working on that. The story is fascinating and it’s really potent because we’re still in the middle of this crisis. It felt very real and necessary in the most urgent way. I didn’t have any sense at first of where the problem was and when you get to step back and see it, you realize it’s a very dangerous cycle. We’ve been here before and we need to figure out a way to solve this issue.

Abdelfatah: Working on the North Korea episode was similarly eye-opening for me. I think for most people the country is kind of a black box. We don’t have much knowledge about it beyond missile tests and the summits. So working on that episode was very humanizing. I had no real sense of the impact of the Korean War, and just how strong its reverberations are. Another thing I liked in that episode was talking to one of the defectors who had left North Korea. Her story is incredible, and it made a story that’s so often depicted as an abstract news headline into one that had a human face. I found that very powerful and hopefully our listeners will find it powerful, too. I think it’s so important, when possible, to hear history told by people who actually lived through it, and that’s one episode where we were able to do that.

Sophia Steinert-Evoy is Podcast Review’s Interviews Editor and a producer at The Nation. She has worked on The Organist podcast from KCRW and Citations Needed. She lives in Brooklyn, NY.