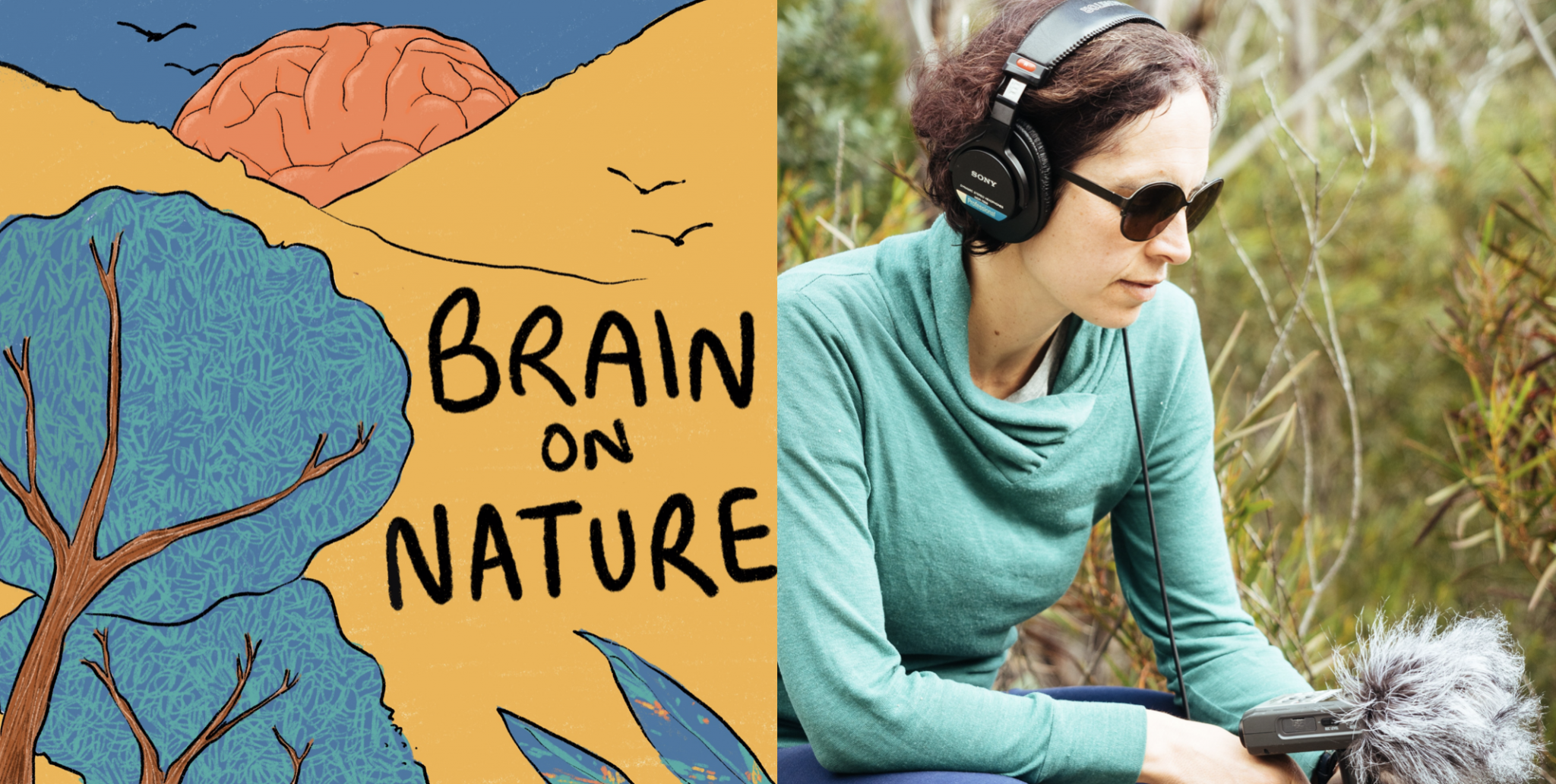 Brain on Nature, a new six-part podcast series, follows host Sarah Allely as she tells the story of her recovery from a mild traumatic brain injury. After a bicycle accident in 2015, Allely was left unable to read books, watch television, or listen to podcasts. It was only through engaging with nature that she gradually recovered, and the series involves her seeking out scientists and other experts to explain nature’s healing effects on our minds and brains. Allely’s keen and lively narration makes the podcast as entertaining as it is informative. I spoke with her to learn more about how the independent podcast came together, and the long journey of her recovery.

For those who haven’t listened to the show, could you explain what it’s about?

Brain on Nature is about how going out into the natural world changed my brain. It’s a narrative non-fiction series that follows my recovery from a mild traumatic brain-injury. My injury completely altered my senses, my ability to communicate, and my ability to participate in the world. Modern urban life was too much. I gravitated toward natural environments, and used these more gentle sights, sounds, and sensations to re-learn how to process the world. The series is very sound-rich and immersive. We combine my personal audio diaries from my recovery, my present-day reflections, recordings from the natural environments I escaped to, and interviews with scientists, philosophers, and other experts to ask, What do our brains need from the outside world?

When did you recognize that nature could be the cure?

First I relied on previous experience meditating, and just spent a lot of time sitting in my backyard staring a trees. I remember thinking, how would I cope if I lived in an apartment, or a climate not suitable for sitting outside for hours? Gradually, I made the connection between a few different experiences I had in the natural world. But this took a while, as my brain wasn’t functioning properly, I wasn’t joining the usual dots. I started self-medicating with nature, but it wasn’t for months that I found out there was science to it.

Was there much research done showing nature’s therapeutic effects? In general, what was your research process like?

Before I had my brain injury I didn’t know this was a thing. I hadn’t heard of forest bathing or anything. But once I started digging around I found there’s a fast-growing multi-disciplinary research field, but it’s relatively new. And no one is studying people with brain injuries using nature to recover. This was a very slow-burn project, especially in the early days while I was producing the series alone. So I spent a lot of time finding the right experts for my story and then interviewing them, usually over Skype as many were in the US. Until February I was still working at a long-form current affairs TV show, and I have two young kids and a partner who is often away for work, so my research process was very slow. 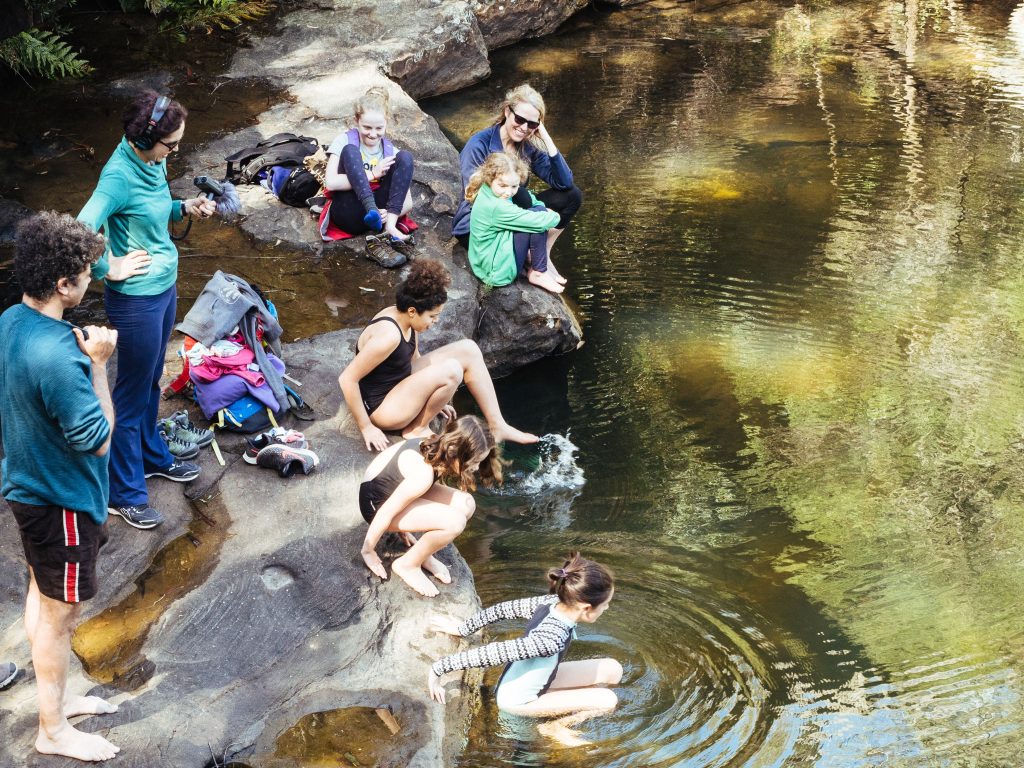 When did you first decide to tell the story of your experience in the form of a podcast?

When I discovered there was science to this whole nature/brain thing I thought, I want to make a documentary about this, once I’ve recovered sufficiently. But as I was working in TV I assumed it would be a film. But audio has actually always been my personal preferred medium, and I realized that I could potentially just start making it, without a crew or a budget. And the story lent itself well to a podcast, as my experience was very focused on sound and how my brain deciphered them. Importantly, I had some voice memos and recordings on my phone from early medical consults that I had made because I couldn’t write or remember stuff at the time. While there is a lower barrier of entry to podcasting than film, and it’s easier to do solo or with a small team, everybody should know that making narrative audio is not easy, simple or fast. It’s quite deceiving in that regard.

Your past experience is primarily as a television producer. How does producing audio compare? And in what ways is it entirely different?

Making non-fiction narrative audio uses much of the story-telling techniques and research and interview methods I used as a journalist/producer in TV and print. But there was a lot I had to learn on the job. A major difference I had to grasp was writing conversationally – my mentor Claudia Taranto pushed me hard to make it actually sound like I’m chatting to you. It’s hard work to make narration sound casual.

Another difference I had to get my head around was the fact that you can’t communicate many facts through audio, you have to strip it right back, simplify it. It’s actually more dumbed-down than TV, which surprised me. When we read we can take in a lot of information, especially as we can go back if we don’t follow something. In TV and film we can use images and graphics to communicate points and concepts. But when we listen to audio our brains don’t take in so much detail. However, overall audio is brilliant for story-telling, as the lack of pictures makes you create your own, our imaginations kick in.

From the start I knew it had to be an immersive, sound-rich show that took listeners into the soundscapes I experienced while recovering from my brain injury. I imagined people experiencing the intensities of urban environments like cafes and train stations, but dialed up so they got a sense of how my head felt after the accident. I also wanted to take listeners out into the natural world, and give them the contrast, let them experience the calm of the sounds of forests and beaches and parks.

However, as this was my first podcast, I had no idea how to create those scenes and layers and texture. I also didn’t know how to make transitions between scenes and effectively score such a series. I knew we would need a sound designer, and our funding applications emphasized this. When we didn’t secure funding I committed to invest some savings to hire a very talented emerging sound designer. Ariana Martinez is based in NYC, in the Bronx, and I live in Sydney, Australia. It was important to me that the sounds were authentic, recorded on location for each scene. So I meticulously collected field recordings around Australia and New Zealand, with directions to Ariana for how to place them. However, I deliberately sought out a sound designer with a strong creative flair. Ariana gave the series an excellent treatment that evokes many emotions and reactions. They created wonderful scenes and transitions and paced it beautifully.

This is your first podcast, and you produced it independently. What advice do you have for our readers who are thinking of making a podcast of their own?

Build your team early. Audio production can be very lonely. The sooner you bring other people on board and the more people who feel ownership over the project early on, the better. Go to audio conferences and events, find people interested in your project that you connect with, or people you can collaborate with on a new idea. Try to find people who bring different skills and experiences to the table.

I met co-producer Olivia Rosenman and web developer Darcy Christ at the first audio conference I went to in Australia. We instantly connected, and the following year, when I was at the point of feeling lonely and overwhelmed trying to produce Brain on Nature on my own, I met up with them again and invited Olivia on board. Darcy was often around while we worked on the series, and this year he kindly offered to develop our website. A good website is essential for podcast discovery and making you look professional. Also, if you’re making a narrative series, be prepared to work three times as hard and long as you expect. So make sure you chose a story or subject that you are extremely passionate about. Lastly – find a mentor. I was fortunate to be mentored for the last nine months of the project by veteran audio producer Claudia Taranto.