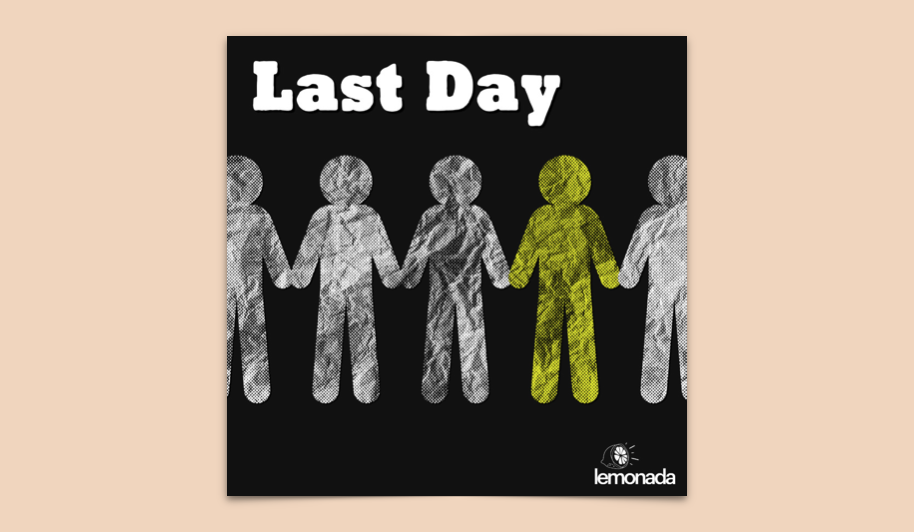 It’s not surprising that Last Day, Stephanie Wittels Wachs’s podcast covering her brother’s death from a heroin overdose, contains moments when the line between public entertainment and people’s personal lives disappears. Harris Wittels was a comedian and television writer who worked on shows like The Sarah Silverman Program and Parks and Recreation, the latter of which featured him playing a character named Harris. But even given his work in the industry, media encroaches on life more than one might expect in Last Day, the first podcast from Lemonada Media. Some of these encroachments are painful, like when we hear how Harris’s mom learned of her son’s death from TMZ. But not all are bad. Last Day itself would not exist without the simulated intimacy of podcasting. Stephanie Wittels Wachs and Jessica Cordova Kramer, the two co-creators of Lemonada, met when Cordova Kramer reached out to Wittels Wachs after hearing her on Terrible, Thanks for Asking.

Interactions between entertainment and everyday life may not be the main point of the show, but they do serve a purpose. The first season of Last Day is all about opioid addiction, and one of the goals of the show is to remind listeners that the news stories we hear about opioids represent more than mere datapoints. Both Wittels Wachs and Cordova Kramer lost their brothers to overdoses and every time we hear a tale of addiction on Last Day, we learn a new way in which it can destroy lives. In one example, we are told how little support those addicted to drugs are offered in prison, at times going through the agony of opioid withdrawal with little medical help in a cell full of strangers.

Another goal of the show is to correct misinformation. Despite the news media’s unending coverage of the opioid crisis, Last Day reveals that most people are woefully undereducated about how addiction works. Interviewee after interviewee admits to a previously held misconception about the possibility of curing addiction. A visit to rehab does not, the podcast points out, end an addiction, because addiction, at best, is only ever in remission.

To accomplish the work of education, Last Day takes a deep dive into multiple facets of the crisis. Wittels Wachs learns so many disheartening facts that the task of fixing them might feel like shouting at a stone. There are rehab centers that offer a commission for convincing people to pay for treatment there, and paramedics who end up treating the same person for overdoses five times in one day.

Many episodes feature an interview with an expert on a topic related to the opioid crisis, and these interviews feel more intimate than one might expect. Doctors give us medical explanations for how addiction works, but they also show their human side. We hear their emotions breach the surface in a way not every podcast accomplishes with its interviews. Wittels Wachs’s personal experience with the show’s subject matter makes the intimacy of these moments possible.

A unique aspect of Harris’s story is his above-mentioned celebrity. Harris’s prominence in the entertainment world means multiple stars lend their voices to Last Day. Sarah Silverman tells us about how Harris convinced her to give him time off to see Phish, and Aziz Ansari talks about Harris’s ability to write dialogue.

Ansari’s appearance on the show won’t be welcomed by all listeners. His July comedy special Aziz Ansari: Right Now was his first since allegations of sexual misconduct against him surfaced in 2018. Though Ansari undoubtedly was a friend of Harris’s, the appearance distracts somewhat from the episode. Though the desire to include celebrity voices is understandable, this one seems unnecessary.

One of the strengths of Wittels Wachs as a host is her extensive vocal experience. An accomplished voice actor, she has appeared on a range of television shows including the English dub of the anime series Welcome to the N.H.K. In Last Day she showcases her versatility, flipping smoothly between wit and seriousness and keeping a casual demeanor throughout the series. The episodes can be slow at times, and Wittels Wachs might repeat ideas for emphasis too often, but for the most part, the podcast’s writing balances facts with personal experience in a way that keeps the series from becoming overly didactic.

The most telling reference to the entertainment world in the series comes when Wittels Wachs imagines being a reality TV host. With dramatic music playing in the background, she does an impression of A&E’s Emmy-winning series Intervention, pretending to offer an ultimatum to a person suffering from addiction. Her impression conveys all the tension and excitement that such a show might bring, but also suggests its shortcomings. It is entertainment in the guise of help, because as Last Day notes, many experts question the methods of interventions like the ones shown on Intervention. Though Wittels Wachs certainly wants to entertain, she makes clear in the segment that she doesn’t want to do it at the cost of helping address the crisis responsibly. Her show, the moment stresses, is about more than entertainment; it is about a community who has dealt directly with substance abuse, and how that community can unite to help end a crisis.