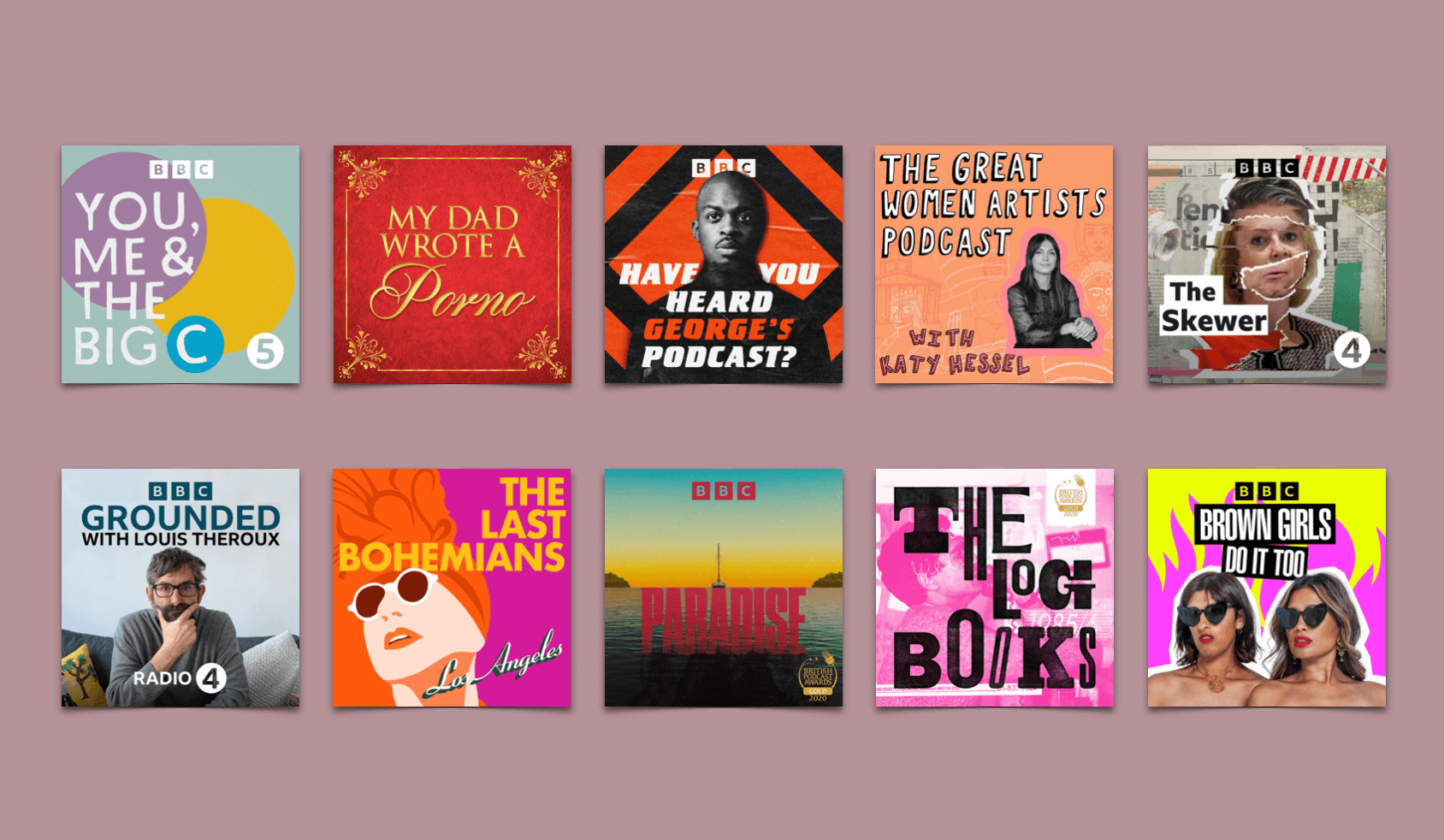 Take a glance at the national podcast charts on any podcast app and you may notice that, although many popular American podcasts make the British list, very few shows from Britain reach across the pond. Does this matter? Yes, old chap, it does. Britain has a rich radio heritage, producing publicly funded arts and news programming that included “audio dramas” long before podcasts tried to make them a thing.

In recent years, these British radio shows have become available on streaming platforms and now call themselves podcasts, which raises a debate in and of itself. Can a radio show also be a podcast? What happens when a podcast is so popular it moves to radio? Britain, on the whole, has rejected these categorizations. But we don’t only do radio. Podcasts from a wide variety of British talent have joined the ranks — even if those ranks are, unfortunately, overrun with shows that stick to the tiresome host-plus-celebrity format. But don’t lose heart. As the representative of my country’s cultural offerings — at least for the purpose of recommending podcasts — I’m here to tell you that there are plenty of excellent British shows that may have passed under your radar. Here are ten of the best British podcasts:

One prominent exception to the oversaturated interview format comes from Louis Theroux, a veteran documentary filmmaker, writer, meme, and now host of the widely praised podcast Grounded. Since the beginning of his career, Theroux has been asking uncomfortable questions that break down the walls around his subjects. Now confined within the walls of his home, Theroux has turned his investigative lens into a microphone, calling guests on both sides of the Atlantic. Speaking to actors, writers, and other filmmakers, the conversations are no less insightful than those in his documentaries. As Theroux himself puts it, the show is a mix of “the celebrated, the controversial, and the occasionally shocking,” but trust me when I say it’s also a pleasure.

You, Me and the Big C

Despite describing themselves as “the coolest club you never want to be a part of,” You, Me and the Big C have grown a devoted fan base since the show launched in 2018. If you’re wondering how a podcast about cancer became one of the most beloved British podcasts, the answer is simple: honest, raw broadcasting about a topic that will affect most of our lives. The show began with Debs, Rachael, and Lauren, three women discussing their experiences with this disease, sharing uplifting moments between the hospital visits and test results. Their warmth and candid conversations became a comfort for thousands.

Over the years, regular listeners have followed the ups and downs of the hosts, including the tragic deaths of Rachael Bland in 2018 and Deborah James earlier this year. The fact that complete strangers from across the country mourned their passing proves the show’s impact. Choosing to share your pain and anger is astonishingly brave, and the women who run this show have bravery in buckets. This is not just a podcast; it’s a tool for so many.

Have You Heard George’s Podcast?

Most of us will remember when we looked at the night sky and believed there were nine planets orbiting the sun. “When I was in school there was a planet called Pluto,” George the Poet mumbles in his signature, melodic tone, “turns out there’s not…maybe that’s just the story we tell ourselves.” It is easy to see why his show was singled out at the British Podcast Awards and the second season was picked up by British national radio. Have You Heard George’s Podcast? turns life on a London estate into a multi-sensory audio manifesto, questioning the media narrative around Black and working-class communities. Listening requires a sensitivity to language and rhythm that places the show more in the sphere of literature or art installation, making it an innovative and compelling production.

Brown Girls Do It Too

Another common format in British podcasting is the weekly conversation, or as we call it, a good chinwag. One of the most popular examples of this style, The High Low, came to an end recently, but the gap is being filled by shows like Brown Girls Do It Too. Listening to an episode of BGDIT feels like going to the pub with your mates. Fun, carefree, littered with expletives. A production by the Asian Network, the episodes are raucous, exploring topics of sexuality for young Asian women with humor but without apology. Roya, Rubina, and Poppy aim to normalize conversation about sex and “wanking,” defying cultural expectations in effervescent, anecdote-filled romps.

At its best, British history is rich and varied. At its worst, it upholds archaic institutions to a fault, erasing the contributions minorities or non-conformists. Podcasts like Windrush Stories and About Race have addressed these misrepresentations, shedding light on experiences that didn’t make the textbooks. The show that makes this list is The Last Bohemians, a podcast that interviews provocative, subversive, and ground-breaking women from an underrepresented period of British history. As Bonnie Greer states in her episode, “To be a woman in a culture that was patriarchal is a revolutionary thing. And to be a Black woman is double revolutionary.” For a podcast about rule breakers, the format of the show is simple. But the idea of exclusively interviewing trailblazing older women is fresh and engaging, documenting a gritty and turbulent period of our recent history to great effect.

It’s hard to find anything genuinely unique in podcasting. (As I write this, I’m preparing to review another true crime series.) But for those seeking auditory innovation, give The Skewer a try. This “satirical DJ set” is the brainchild of British comedian, writer, and broadcaster Jon Holmes, who mixes different audio clips from the week’s BBC radio news cycle with pop culture soundbites to create snappy episodes that expose the farce and fiction inherent in today’s politics. The result is a surreal cacophony of voices spliced together with the same rapidity of a scrolling newsfeed. These clips aren’t just stitched together; they’re skewered.

Katy Hessel, the creator and host of The Great Women Artists podcast and Instagram account, is the quintessential British art history student. Eccentric, verbose, and impassioned, her interview style will either captivate or infuriate you. Hessel is on a mission to bring forgotten woman artists to the fore of the art world by capturing the younger generation through social media and podcasting. The format of the show is a stroke of brilliance. Each week, Hessel interviews another influential female historian or artist about her subject (Wanda M. Corn on Georgia O’Keeffe, for example). Her intelligent interviewees make for fascinating listening, bringing to life a visual medium that might otherwise fall flat as an audio experience. There are also a number of contemporary women artists, such as Chloe Wise, that move the show beyond history to become a measure of the millennial cultural zeitgeist.

“How deep do you wanna go with this story?” This is the question asked by the son of the only suspect in the double murder of a British couple in the first episode of Paradise. In 1978, Peta Frampton and Chris Farmer were drowned off the Caribbean coast of Guatemala. Silas Duane Boston, the suspect, fled back to California on his boat shortly after the couple went missing and wasn’t arrested for thirty-eight years — despite his sons telling the FBI they witnessed him commit the murder. Why did the arrest take so long? Without resorting to tropes, the show delivers an engaging island murder investigation minus the exoticizing clichés. Paradise, steered by a British journalist and an Irish radio presenter (who, unfortunately, spends a bit too much time moaning about logistics), gives the true-crime genre a refreshing addition in the form of this glossy podcast, combining meticulous reporting with top-rate editing.

How do we tell authentic stories of marginalized history? What if we could take a peek into LGBTQ+ life in Britain decades ago? These are the questions that writer Adam Smith and trustee of the charity Switchboard, Tash Walker, wanted to answer with The Log Books. A queer history podcast from Acast, The Log Books takes its name from a set of unique notes taken in the 1970s by volunteers at Switchboard, a helpline set up for queer people all over London. With two seasons covering the 70s, 80s, and 90s, the show includes topics of sexuality and gender identity. What better way to portray oral history than through audio? The show is a moving and valuable record of social history.