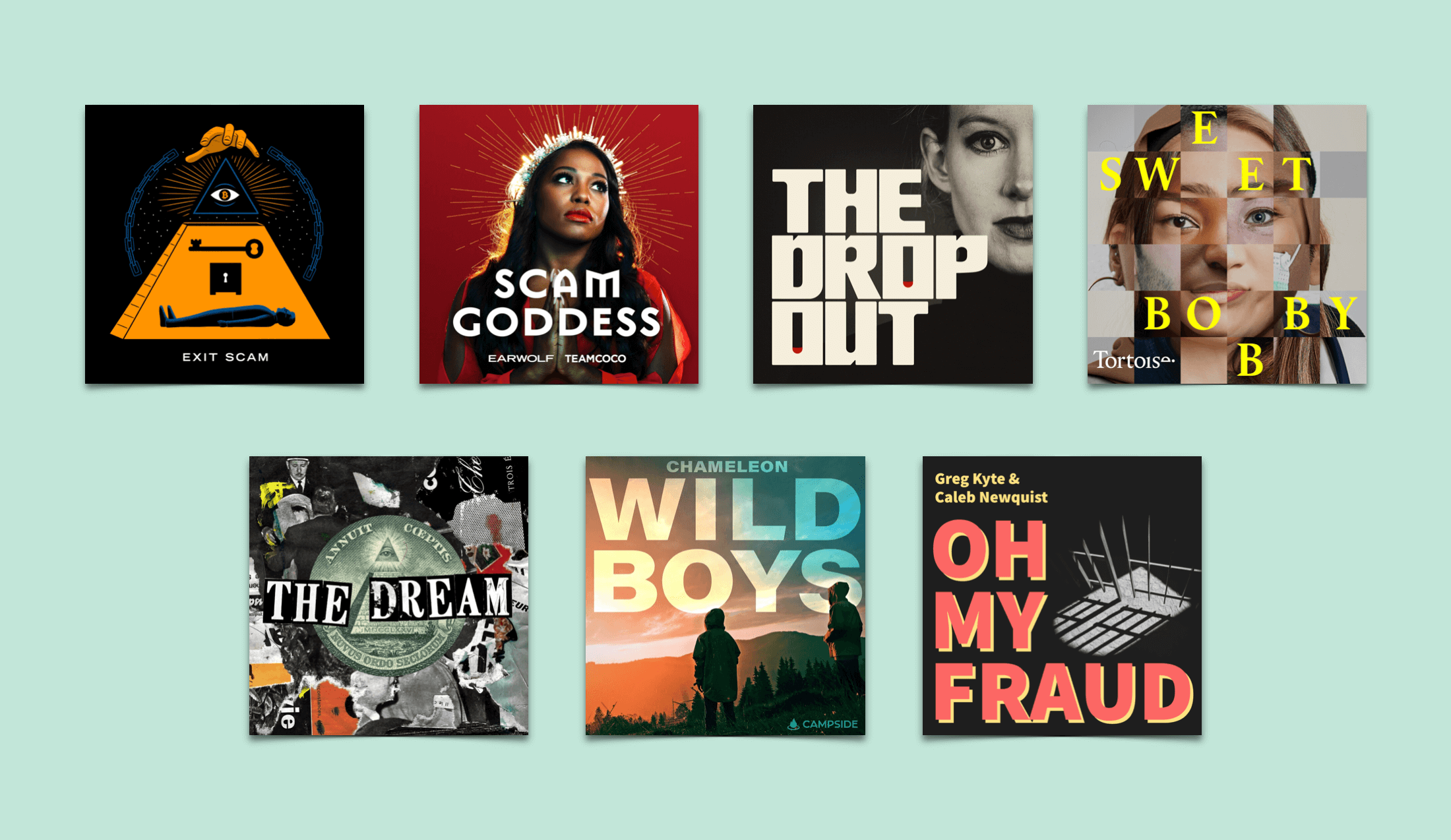 Scam podcasts have experienced the sort of recent success other genres can only dream of. Like their kindred spirit, the true-crime podcast, these shows have captured the imaginations of television execs and movie producers looking to capitalize on our lust for scandal and deception. Podcasts like WeCrashed and The Dropout have been made into hit TV shows, confirming the scam genre as a lucrative one. But when it comes to hoaxes, fraudsters, and con artists, you have to wonder: what is the real heist here? Their crimes or our endless obsession with misery?

When it comes to a great scam podcast, ethics is only one concern (although the most flagrant violation is the use of the historical present tense. Please, stop doing this). Other factors that distinguish silver from nickel include quality research, innovative narrative structure, and a host that prioritizes curiosity over judgment. Like it or not, these scammers have become our cultural mascots; too much condemnation spoils the fun.

Where many popular scam podcasts cast judgment on their subjects, Scam Goddess celebrates the ingenuity of fraudsters, no matter the scale of their crimes. It’s all tongue and cheek, of course. But when host Laci Mosley reads a message from a listener detailing their recent racket, it’s hard to tell whether they fell victim to the scam or perpetrated it. Mosley treads the line between ridicule and glorification; this is not a show for the morally obstinate. She carries it off with wit and charisma, backed up by a medley of guest hosts who add hilarity to an already raucous show.

Mosley calls her listeners the “Con-gregation,” which speaks to the level of devotion bestowed, not just on Scam Goddess, but across the scam podcast genre. The show works because it isn’t only reliant on these scam stories to add intrigue. Instead, listener participation is what sets it apart from a crowd that takes scamming too seriously.

Exit Scam is a podcast about the death — and possible afterlife —  of Gerald Cotten. If you’ve never heard of him, you’ll be filled in pretty quickly. This podcast draws you immediately into the story of the CEO of what was once Canada’s biggest crypto exchange. Before we go any further, nobody here is suggesting that crypto is a scam. Not the indictment of Sam Bankman-Fried. Not Giselle and Tom’s divorce. And especially not the plummeting value of your favorite token. No, the fraud at the heart of Exit Scam is a disappearance.

Did Cotten really die in 2018? Or did he fake his death to commit his own exit scam? A typo on the death certificate. Millions of missing dollars. It’s an intriguing idea, one that propels the plot all the way to the season finale. Exit Scam is a classic mystery plot wrapped up in Bitcoin with a lot of mileage. There will be more stories like this.

If you were asked to name a scam podcast, there’s a good chance The Dropout would come to mind. The downfall of Theranos founder Elizabeth Holmes has become the stuff of modern legend and it’s arguable that some of the frenzy began with this podcast. Holmes was the young CEO who built a house of cards with millions of dollars of investment; she traded big ideas for capital to a host of wealthy and well-credentialed investors, but there was nothing to back any of her idealism. The Dropout covers her downfall, returning for additional episodes during her trial and sentences.

Female scammers are bonafide celebrities. Do you remember the name of the co-founders of WeWork? It seems that the frauds who take root in the public consciousness — the likes of Holmes and Anna Delvey — tend to be women. As a society, we’re enthralled by “crazy” women; it’s unlikely this will be the last story of the fallen female CEO. The Dropout launched a litany of copycat podcasts, but none have matched the original. If you’re worried  the subject matter is what carries this show, rest assured that the Dropout is the real deal.

Sweet Bobby is a podcast about catfishing, but the culprit is not who you expect. From Tortoise Media, the show tells the story of Kirat, a successful British radio presenter who meets Bobby, a sensitive family friend who spends the next decade making her life wretched. Bobby is a masterclass in narrative intrigue. The podcast’s host, Alexi Mostrous, immediately draws you in with a complicated narrative structure that constantly oscillates between hint and revelation. Just when you think something has been revealed, three more questions are introduced. It’s done with a subtlety that allows the listener to forget about the conceit of the podcast, leaving them free to become absorbed in the story. Sadly, this is rare in the scam or true-crime podcast genre.

In hindsight, there are so many red flags in Kirat’s story that you lose count by episode two. But what Sweet Bobby masterfully achieves is an insight into her state of mind. By the end of the show, it’s easier to understand why she was manipulated, making the revelations even more disquieting.

The Dream thrives on skepticism. This podcast from Little Everywhere made a splash with the launch of its first season: a deep dive into the murky world of “Multi-level Marketing.” You’ve probably heard of MLMs — widely considered to be badly concealed pyramid schemes — but when The Dream was first released, interest in these kinds of scams has yet to reach its reach its height. TV shows like LuLaRich have exposed terrible business practices, but what makes The Dream exceptional is its focus on historical context.

The second season of The Dream is about wellness. Although there are moments of gold, host Jane Marie often fills gaps where research lacks with her own opinions, which weakened the show’s second outing. Other podcasts, such as Maintenance Phase, cover the wellness industry in better detail. Nevertheless, The Dream is the industry standard when it comes to investigative journalism on scams. Season three promises a dive into the self-improvement industry. Scam fans, turn on your notifications.

When Greg Kyte and Caleb Newquist call their podcast “irreverent,” don’t take them too seriously. These two CPAs might think that they have no respect for the victims of fraud, but their bark is fiercer than their bite.

In fact, their cheekiness is exactly the sort that every genre needs — you might see parallels between Oh My Fraud and Book Fight — especially when paired with their palpable chemistry as friends and colleagues. Like Scam Goddess, this show has a chuckle at the expense of stupidity. But unlike Scam Goddess, Oh My Fraud currently has only 34 reviews on Apple Podcasts. Either this is a hidden gem or not too many people are into accounting nerds these days. Whatever the reason, this show covers various scams that any respectable CPA might need to be aware of, and anyone wary of fraud will appreciate the insight that Kyte and Newquist bring to the scam podcast genre.

From Campside Media comes Chameleon, a string of podcast limited series that harmonize electrifying storytelling with some of the best mysteries of our time. Most people became aware of the show after the launch of Hollywood Con Queen, the tale of a movie that never existed, gender power dynamics, and a scam that proves everyone in Hollywood is trying to be someone else.

Their latest release, Wild Boys, takes a different tact. Instead of an overt scam, they present the mystery of two lost boys who subsist on “pure” foods. As they waste away, everyone around them tries to piece together the truth of their identities. Are these boys who they say they are? Many shows rely on the trope of using the historical present to bring the past to life; Chameleon doesn’t need this. Host Sam Mullins set the scene using a mix of geographical markers and cultural signs so that the listener feels part of the narrative. Yet throughout, Mullins maintains the sense of uncanniness that is essential to a mystery. It’s no wonder that we named it one of the best podcasts of 2022.

Alice Florence Orr is the Lists Editor of Podcast Review and is based in Edinburgh. Her work has appeared in Scottish Review, Like The Wind, and Nomad Journal. You can connect with her on Twitter or Instagram.