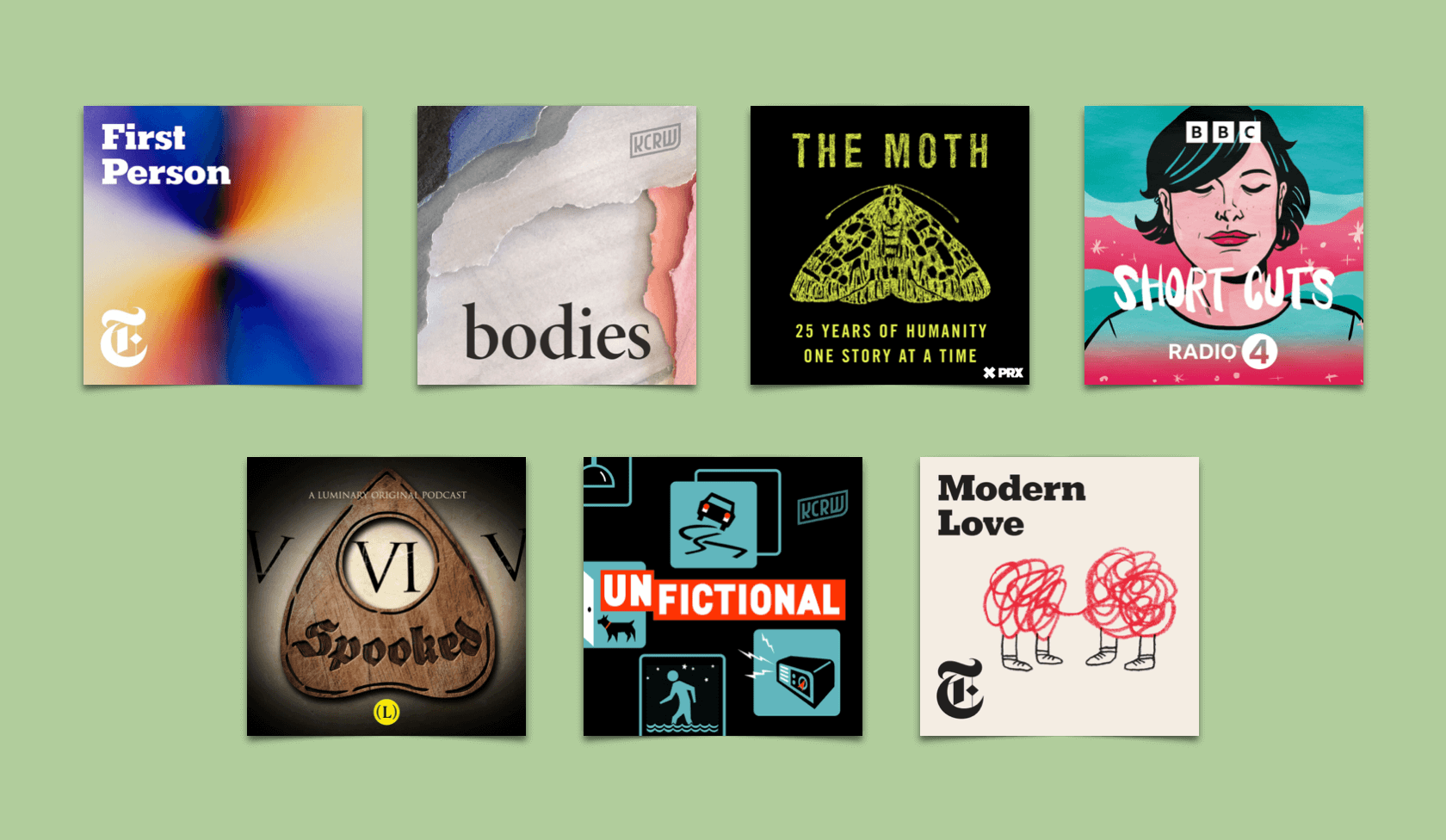 The storytelling podcast is the natural evolution of a tradition that might be said to predate the Homeric ballad. Indeed, “telling a story” is common to most cultures, often in the form of oral histories or religious ceremonies. We tell stories to our children, to our friends over a few drinks, and in places of worship, just to name a few examples. And now, with the rise of storytelling podcasts, the verbal yarn has become even more pervasive.

We consider a “storytelling podcast” one that involves a series of singular, contained narratives told — told, not performed — by one or more narrators. This American Life is one such example, but it’s by no means the only storytelling podcast out there. Here is a list of seven of our absolute favorites.

From BBC Radio 4 comes Short Cuts, a series of narrative nonfiction with a dreamy, escapist tone that’s perfect for late-night listening. Presented by British journalist Josie Long, the show features “audio adventures” that experiment with form and narrative convention, often basing episodes around themes such as “devotion” or telling stories through numbers.

Short Cuts has earned a devoted following who call the show “triumphant,” “humbling,” and “something to be savored.” These fans also leave comments about when and where they listen to Short Cuts: sitting at the window, watching the rain; lying in bed before drifting off; on a dark Sunday evening with a cup of tea. This is a show that inspires us to pause, even if only for a half-hour.

UnFictional, a long-running storytelling podcast from KCRW, turns the microphone on those small moments that spiral into something bigger. History and memory collide on this show, which mixes narration with on-the-ground recordings, giving each episode a journalistic tone. Hosted by former radio DJ Bob Carlson, the podcast delivers its stories with smooth editing and compelling narration.

A recent highlight of UnFictional was its season focusing on “Stories of Transformation” in the aftermath of the pandemic. The theme succeeds because it doesn’t supply the obvious: rather than news headlines, the show tells stories such as a father whose children suddenly grow up too fast, and that of a forgotten notebook that unexpectedly brings the past into the present. UnFictional’s stories are always a comfort, but they don’t shy away from difficult topics. Rather, the podcast repackages strife into moving and thoughtful tales.

First Person, the latest podcast from New York Times Opinion, seeks to reveal the stories underlying our viewpoints. After all, the show argues, opinions are not created in a vacuum. The podcast is hosted by former NPR journalist Lulu Garcia-Navarro, an experienced interviewer who has tackled conversations with heads of state and leading artists alike. At a political moment like this one, it’s challenging to open up to opposing opinions, especially if they threaten our human rights. But First Person promotes the idea that without conversation, we lose the basis for empathy and understanding.

If your horror podcast isn’t hosted by a seer who witnessed his first exorcism as a teenager, then I’m not interested. I’ll stick with Spooked, hosted by the great Glynn Washington, who is likely best known for his show Snap Judgement. Washington has all the credentials for telling a good ghost story. For one, he “grew up feeling the veil between worlds was not as solid as I may have liked,” which I’d also include in my application for the job. Washington’s hauntings give Spooked an air of unnerving authenticity that draws you back, episode after episode. The show is genuinely scary, but then, so is the news cycle. Perhaps it’s time to exorcise our Twitter feeds. In the meantime, I’ll stick with a well-told ghost story.

More than a medical mystery show, Bodies is a podcast that documents hidden medical journeys, with a particular focus on the experiences of those from marginalized communities. Through intimately told stories, the show reveals the insidious ways that racism, sexism, and economic inequality all contribute to misdiagnosis. Put simply, it gives a human voice to worrying statistics.

Bodies is hosted by Allison Behringer, whose name you might recognize from the credits of The Cut podcast. In my review of the show, I noted the way she “fosters connection beyond pity,” a skill that makes her a deft and sympathetic host, even when a story appears far-fetched. Behringer’s uncompromising empathy serves every narrative with the patience it deserves.

When it was turned into a show on Amazon Prime, Modern Love drew mixed reviews. It seemed like a rather pessimistic approach toward a show that celebrates the lasting effects of love, but critics are notoriously cynical. At least the ones I know. But you would need a heart of stone not to feel touched by the stories on the Modern Love podcast. The sentimentality, which can veer dangerously close to saccharine, can certainly wet the eyes. Nevertheless, the podcast makes this list because of its consistent and enduring impact. For lessons of love and loss and as a showcase of the diversity of human emotion, there are few better podcasts.

Celebrating 25 years of storytelling is no mean feat. My dad ran out of bedtime yarns by the time I was ten. But The Moth is in the business of storytelling, and it helps that they have given a platform to thousands of people with a tale to share. In fact, in a quarter of a decade, The Moth has told over 50,000 stories and held hundreds of live events. Dad is taking notes.

The Moth tells true stories. So far, so conventional. But what makes every episode of The Moth different is that these stories are told live and without notes. Think of it as a TED Talk, but for the messy, imperfect, and poignant. Some of the stories are heartbreaking, others raucously funny. They are a testament to the diversity of the human experience and prove that even if you don’t personally relate to a narrative, it still has the power to compel with its honesty.

Alice is a Staff Writer and Lists Editor for Podcast Review. Her work has been featured in Extra Teeth, Scottish Review, Erato, Brave Voices, and The Dillydoun Review. She is a DPhil candidate at the University of Oxford and the founder of Lean and Loafe ecopoetry journal. You can connect with her on Twitter.